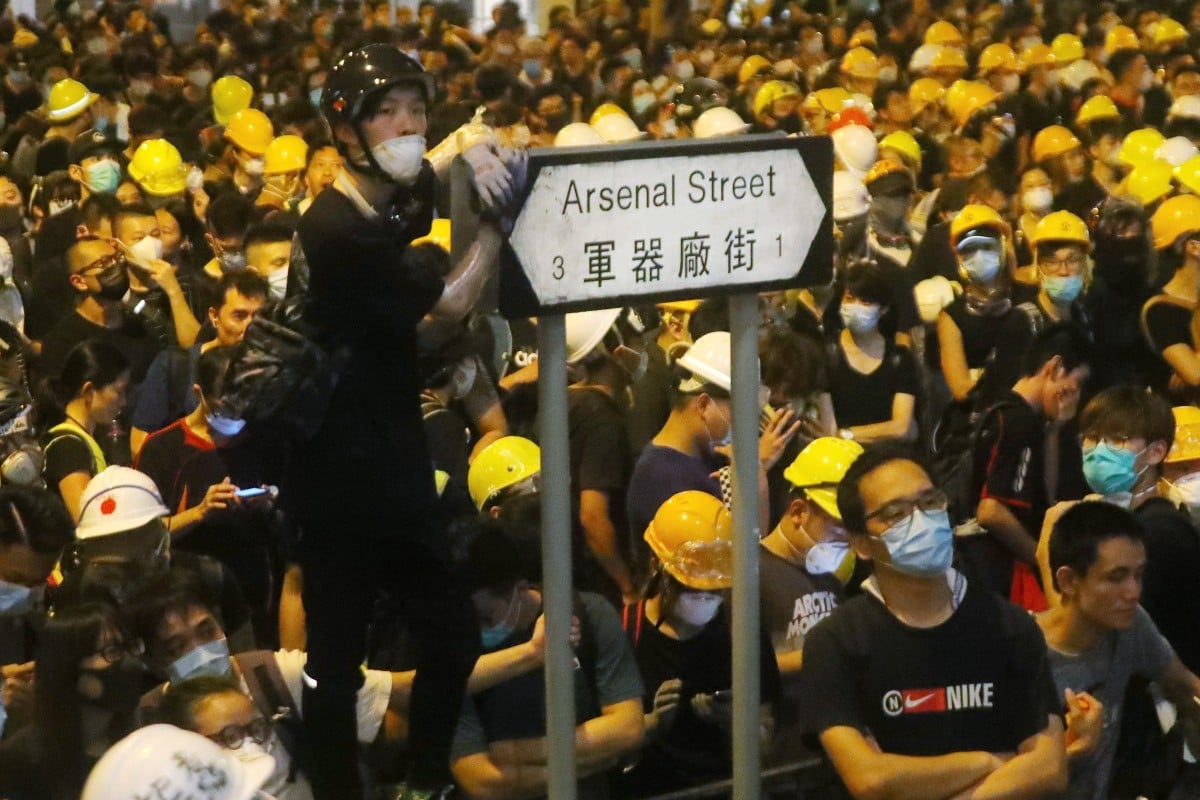 Protesters wear their trademark yellow helmets as they gather outside police headquarters in Wan Chai on June 22. Photo: Edmond So

Helmets, goggles and masks have re-emerged as essential equipment for those taking part in protests against the suspended extradition bill, with some items selling out after violent clashes returned to Hong Kong’s political centre this month.

On June 12, tens of thousands of protesters surrounded the government’s legislature in Admiralty to block the passage of the controversial legal changes, which would have allowed the transfer of fugitives to mainland China and other jurisdictions with which Hong Kong has no extradition deal.

As tensions escalated, police fired tear gas, rubber bullets and beanbag rounds to disperse protesters amid clashes that injured at least 80 and led to more than 30 arrests.

In Causeway Bay, Sum Chuen Construction’s boss Lam Loi-chun said his entire stock of about 60 helmets, selling at HK$50 each (US$6.40), were snapped up on June 12, along with hundreds of masks. Young people shift equipment in Harcourt Road on June 17 that is often shared around at protests. Photo: Sam Tsang

Lam, 58, said the shop’s daily revenue on days of heightened tensions had reached more than HK$20,000 this month – about double what he would normally take.

But he said he did not raise any prices amid the high demand for protective gear, adding: “During the Occupy movement, I even gave them out free.”

The protests were sparked by a proposal from Beijing for the election of Hong Kong’s leader.

Pro-democracy protesters reacted angrily because it fell short of the universal suffrage they demanded for the 2017 chief executive election.

During the movement, police officers and protesters clashed violently when the latter occupied roads in the city’s prime commercial districts.

“I can’t stand by idly and watch,” Lam said. 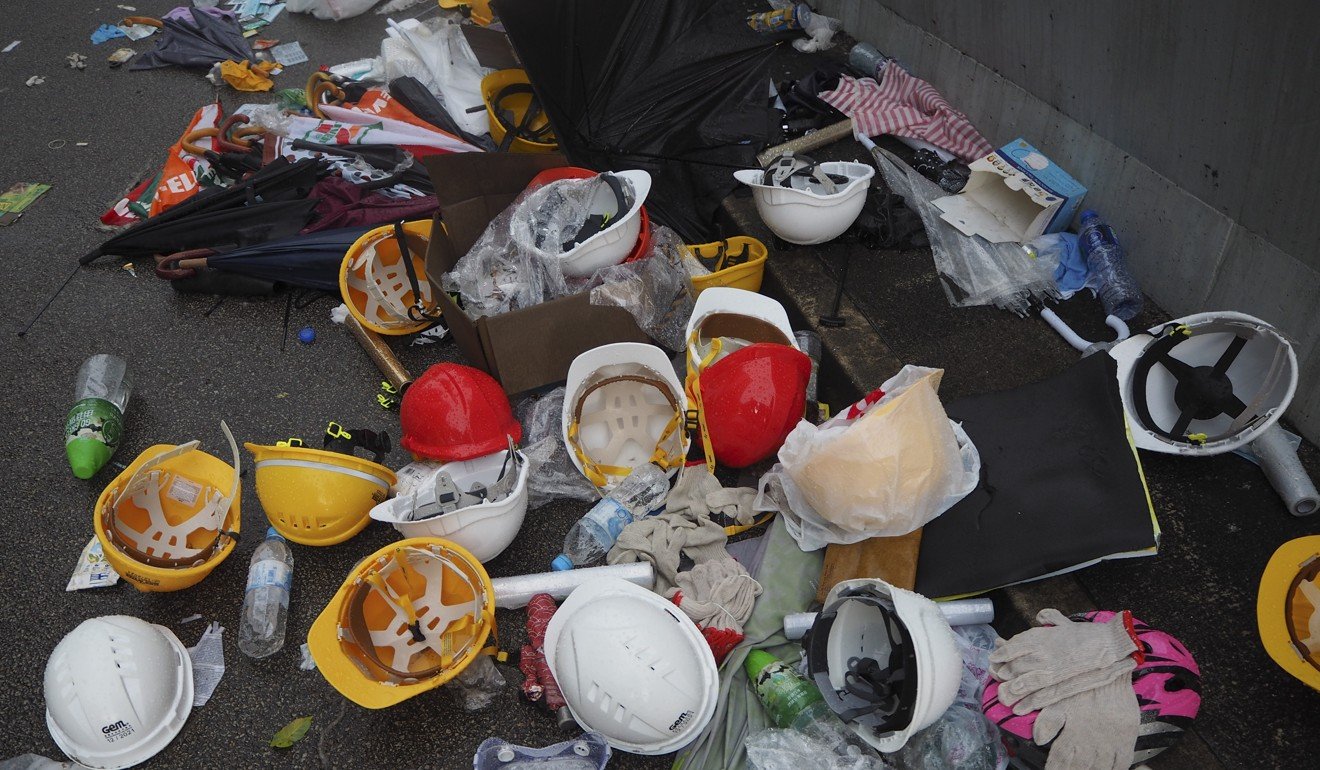 Helmets lie strewn across the road the day after extradition bill protests on June 12 in Admiralty. Photo: Antony Dickson

From the 2014 pro-democracy protests to the extradition bill movement, safety gear was always in high demand among rally goers and journalists, as clashes between demonstrators and police could break out anytime, with unpredictable consequences.

Protesters ran their own resource stations distributing equipment to offer protection to their peers and even used sign language to pass items during noisy episodes.

At Hings Poly-Products in Causeway Bay, a worker who wished to remain anonymous, said about 100 helmets were sold out in the shop on June 12. The store also did a roaring trade in goggles and facial masks.

He said the cheapest helmet cost HK$30, while the store charged more than HK$80 for the most expensive model. The price range for goggles was HK$30 to HK$50, depending on the make.

Customers could have got a mask for HK$10, but needed to fork out several hundred Hong Kong dollars for professional models.

He said usually there was much weaker demand for helmets because construction workers only bought them when they needed a replacement.

Another member of staff at Hings Retail Shop in Wan Chai said more customers stocked up on safety gear after the June 12 clashes, while goggles and masks were already popular.

With the conflict between officials and protesters far from resolved, demonstrators operating resource stations have been working hard to provide extra protective gear for fellow protesters.

On June 17, a day after an estimated crowd of about 2 million took to the streets to demand the scrapping of the bill, young protesters, dressed in black with facial masks, were seen ferrying boxes of helmets, professional masks and bunches of umbrellas through Harcourt Road in Admiralty.

During the protests last Friday and on Wednesday – when thousands of people besieged the police headquarters in Wan Chai – resources such as scissors, umbrellas were immediately available on request.

Ping, a volunteer who worked at a resource stand for the protests outside the police station last Friday, said supplies were offered by many protesters for free. 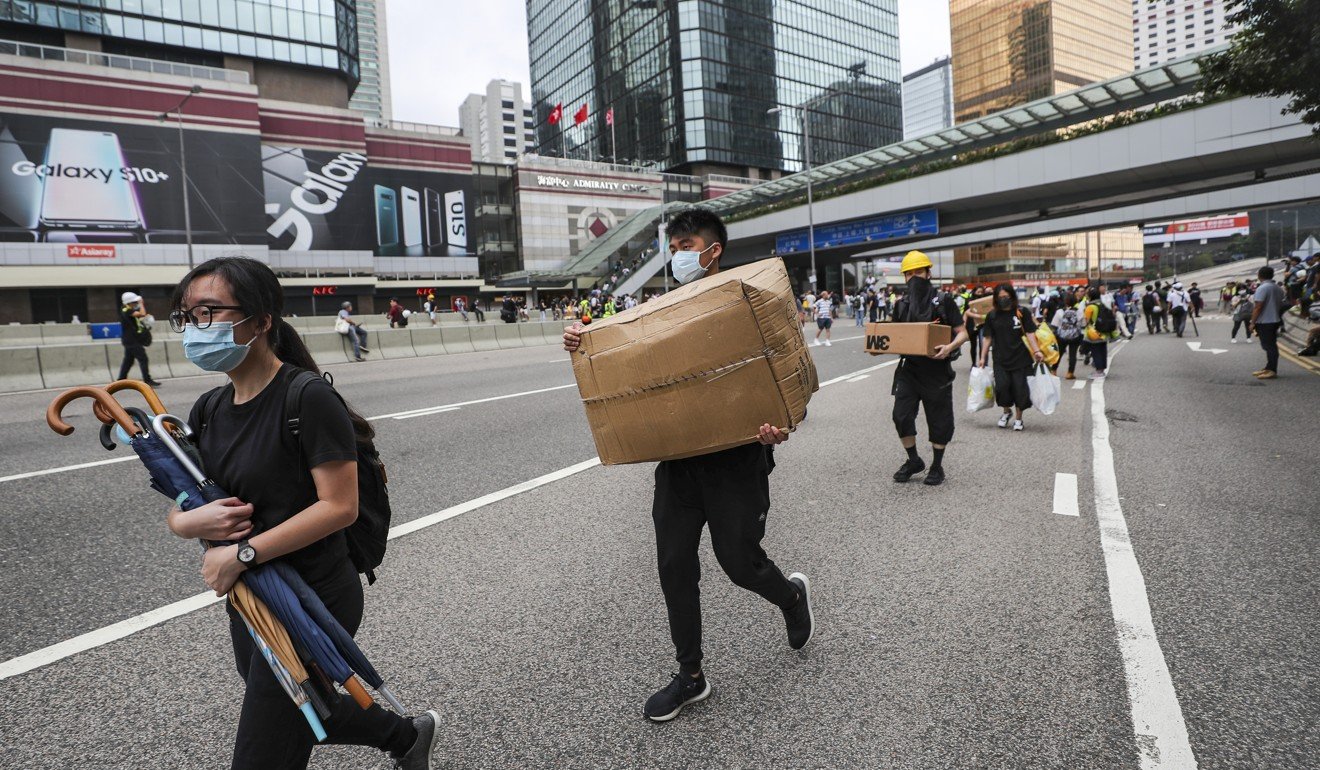 Cardboard boxes of protective gear are used to support protesters in their bid to force the full withdrawal of the extradition bill. Photo: Sam Tsang

“I have seen people coming with donations such as helmets, goggles, masks, umbrellas, sanitary pads, gloves, saline solution, vinegar, scissors, plastic strips and wrap, and even asthma medicine,” said the 28-year-old surveyor, who did not want to be identified by her full name.

“There were even vans delivering supplies free of charge.”

She said some protesters on that day complained helmets were sold out in Wan Chai and Causeway Bay, which prompted an online call for protective gear to be sourced in other districts.

Despite the donations, there were no official statistics of how many people were involved in managing the equipment stalls during the leaderless protests or how many used protective gear.

“People like me just volunteer and help relay supplies even though we do not know each other,” Ping said.