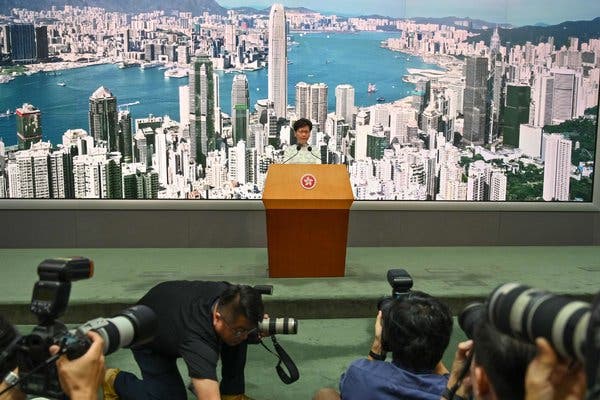 HONG KONG — Backing down after days of huge street protests, Hong Kong’s chief executive, Carrie Lam, said on Saturday that she would indefinitely suspend a bill that would allow extraditions to mainland China.

It was a remarkable reversal for Mrs. Lam, the leader installed by Beijing in 2017, who had vowed to ensure the bill’s approval and tried to get it passed on an unusually short timetable, even as hundreds of thousands demonstrated against it this past week.

But she made it clear that the bill was being delayed, not withdrawn outright, as protesters have demanded.

“I believe that we cannot withdraw this bill, or else society will say that this bill was groundless,” Mrs. Lam said at a news conference.

She said she felt “sorrow and regret” that she had failed to convince the public that it was needed, and pledged to listen to more views.

“We will adopt the most sincere and humble attitude to accept criticisms and make improvements,” Mrs. Lam said. 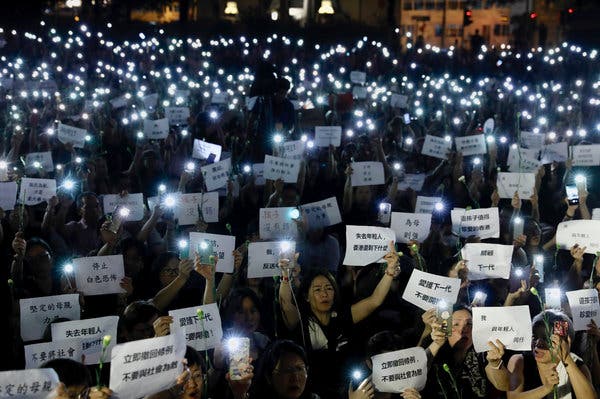 Mothers of young protesters gathered in Hong Kong on Friday night to oppose the proposed extradition law. Some of the signs read, “If we lose the young generation, what’s left of Hong Kong?”CreditVincent Yu/Associated Press

City leaders hope that delaying the legislation will cool public anger and avoid more violence in the streets, said people with detailed knowledge of the government’s plans, including advisers to Mrs. Lam.

But leading opposition figures and protesters said a mere suspension of the bill would not satisfy the protesters, who had been planning another large demonstration for Sunday. Organizers confirmed the protest was still on.

“Postponement is temporary. It’s just delaying the pain,” said Claudia Mo, a democratic lawmaker. “This is not good enough, simply not right. We demand a complete scrapping of this controversial bill.”

“We can’t accept it will just be suspended,” Minnie Li, a lecturer with the Education University of Hong Kong who joined a hunger strike this past week, said on Saturday morning, as word of Mrs. Lam’s plan to suspend the bill was emerging. “We demand it to be withdrawn. The amendment itself is unreasonable. Suspension just means having a break and will continue later. What we want is for it to be withdrawn. We can’t accept it.”

But Mrs. Lam and her superiors in Beijing were reluctant to kill the bill outright, said the people familiar with city officials’ thinking. They insisted on anonymity because they were not authorized to speak on behalf of the government.

A full withdrawal of the legislation would recall the Hong Kong government’s reversals in the face of public objections to other contentious bills that were seen as infringing on the city’s liberties — national security legislation, in 2003, and compulsory patriotic education legislation, in 2012. 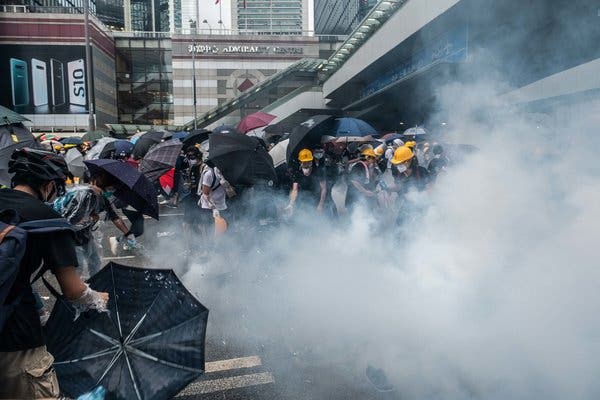 A team of senior Chinese officials and experts met on Friday with Mrs. Lam in Shenzhen, a mainland Chinese city bordering Hong Kong, to review the situation, one of the people with knowledge of the government’s policymaking said.

The bill would make it easier for Hong Kong to send people suspected of crimes to jurisdictions with which the city has no extradition treaty, including mainland China. Many people in Hong Kong, a semiautonomous territory with far more civil liberties than the mainland has, fear that the legislation would put anyone in the city at risk of being detained and sent to China for trial by the country’s Communist Party-controlled courts.

The bill had been moving through the legislative process with unusual speed, and legal experts who raised concerns about that said it would have to be withdrawn in order to address those worries. Otherwise, voting on it could restart at any time, at the discretion of the head of the legislature, which is controlled by pro-Beijing lawmakers, these experts said.

More than a million people marched against the bill last Sunday, according to protest leaders, the vast majority of them peacefully. That was followed by street clashes on Wednesday, as the police used tear gas and rubber bullets on demonstrators.

Officials say they believe that delaying the bill will reduce the risk of a young protester being seriously hurt or even killed in clashes with the police, then becoming a martyr in the eyes of the public. Dozens of protesters have already been injured, and video footage of riot police apparently using excessive force against unarmed demonstrators has deepened public anger in the city.

The government has been dismayed by early signs that mothers of young protesters, who held a candlelight vigil on Friday night, were starting to organize themselves. It is strongly averse to seeing the emergence of a group like the mothers of victims of the Tiananmen Square crackdown in Beijing in 1989, who have been active for decades. 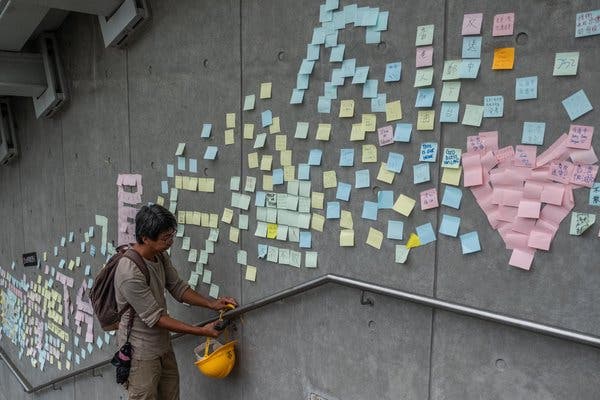 City officials hope that delaying the bill will weaken the opposition by draining it of its momentum, without giving the appearance that the government was backing down entirely, according to the people familiar with the leaders’ thinking.

Asked several times by reporters at the Saturday news conference whether she would resign, as protesters have demanded, Mrs. Lam indicated that she had no plans to do so, saying she would continue her work and improve efforts to communicate with the public. The people familiar with the government’s thinking said officials in both Beijing and Hong Kong had dismissed the calls for Mrs. Lam’s resignation.

In statements issued by several official agencies, the Chinese government said it supported, respected and understood Mrs. Lam’s decision to shelve the bill.

Underlying opposition to the extradition bill is a growing fear that the freedoms that people in Hong Kong enjoy under the “one country, two systems” policy, put in place when the former British colony was returned to China in 1997, are rapidly shrinking.

Emily Lau, a former lawmaker and chairwoman of the city’s Democratic Party, said that she doubted the public would be quelled by the shelving of the bill.

“People are asking for the bill to be withdrawn; if you just delay it that means they can just resume the second reading whenever they like,” Ms. Lau said. She added that a suspension would simply result in another big turnout for the march on Sunday.

“There is always a sword hanging over our heads, and I don’t think the public will accept it,” she said.