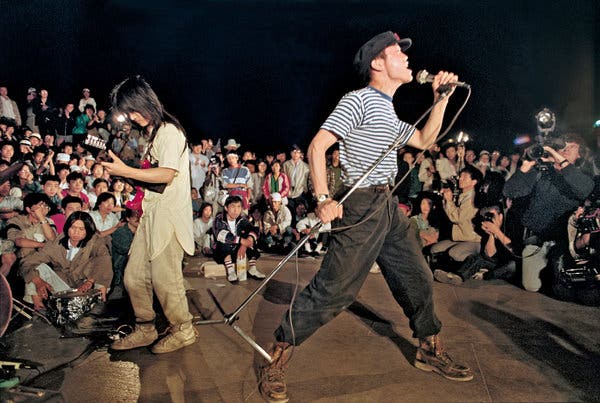 Liu Heung Shing looked outside the car window: an imposing portrait of Mao Zedong had disappeared from the east side of Tiananmen Square. It was 1981.

Mao loomed large that year as people gathered to watch the depositions of his political cronies, known as the Gang of Four, on state television.Earlier that autumn, before Mao’s portrait was removed from a history museum in Tiananmen Square, Mr. Liu photographed a skater gliding past a statue of Mao. The frozen faces of Communist leaders got a breath of fresh air in Mr. Liu’s photography: A Beijing resident in 2008 lined the facade of her house with the portraits of lionized figures, in plucky defiance of demolitions planned before the Summer Olympics.

“It’s very lucky that I could use the camera to do a kind of political reporting that wouldn’t otherwise be possible,” Mr. Liu said. “That daily nitty-gritty about how Chinese live is primarily what interests me because I knew they would tell a bigger story.” 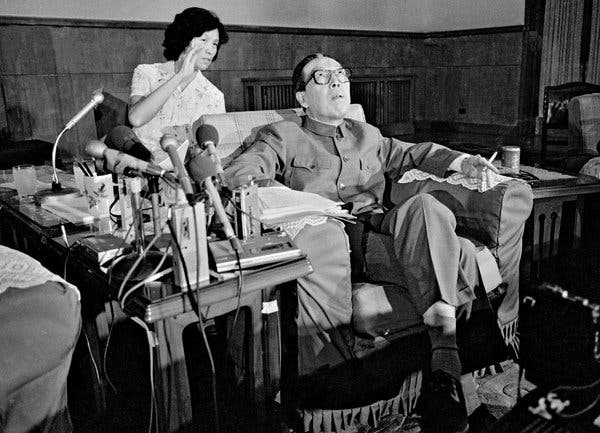 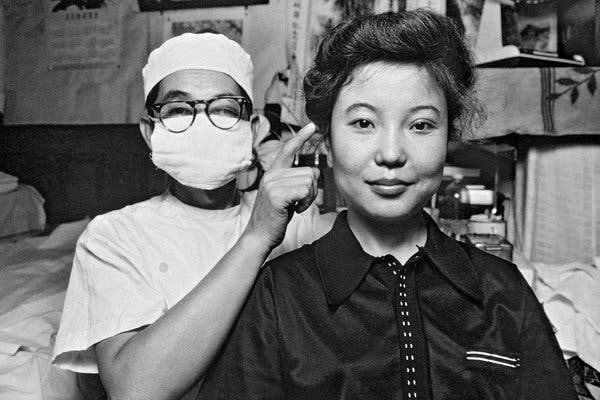 Dr. Fu Nongyu pointing to the eyes of a patient who had plastic surgery to get double eyelids, a feature more common in Western cultures. Beijing, 1980. Credit Liu Heung Shing 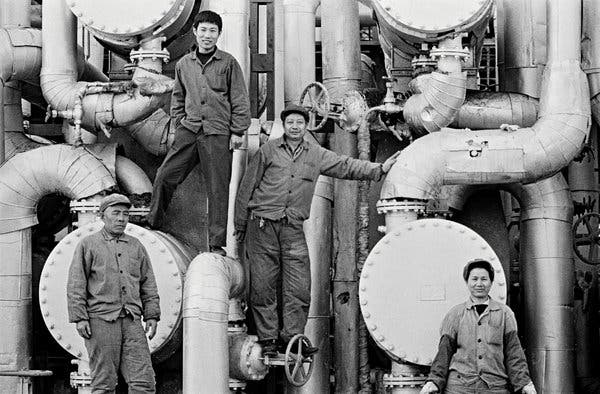 Mr. Liu’s new book of photographs, “A Life in a Sea of Red” (Steidl), starts after Mao’s death in 1976, spanning years of political upheaval in China and the Soviet Union. From the pro-democracy student protests in Tiananmen Square in 1989 to Mikhail Gorbachev’s resignation in 1991, Mr. Liu captured turning points in history. But he was even more interested in the collision of politics and daily life.

At 24, his first assignment in China was to cover Mao’s funeral in 1976 — but visa restrictions thwarted his efforts to reach the capital in time. Stuck in Guangzhou, he photographed men wearing black mourning armbands practicing tai chi in the park. As he watched their arms and legs move languidly in the air, Mr. Liu predicted that the rest of the nation would soon ease up after the turbulence and tension of Mao’s rule.

The clash between the personal and the political was particularly stark in Mr. Liu’s most recognizable images from the military crackdown on protests in Tiananmen Square. From a rooftop, he photographed a couple on a bicycle as they hid in a tunnel, tanks rumbling above. When injured students were rushed on rickshaws to a hospital, Mr. Liu cycled alongside, steering the handlebars with one hand and gripping his camera with the other.

“Of course we don’t forget the carnage of opening fire,” he said. “But never forget that people still live; daily life still goes on. It’s those details that tell you, under that period, this is what happened.” 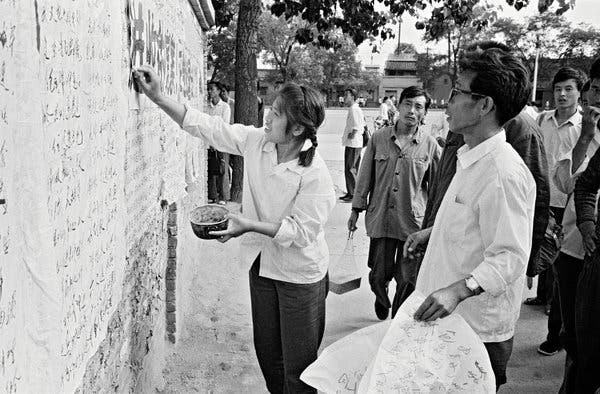 China’s “Democracy Wall,” a bus depot in Beijing where a growing number of handwritten “big character” posters that criticized the government and aired personal grievances appeared on its walls. 1979. Credit Liu Heung Shing 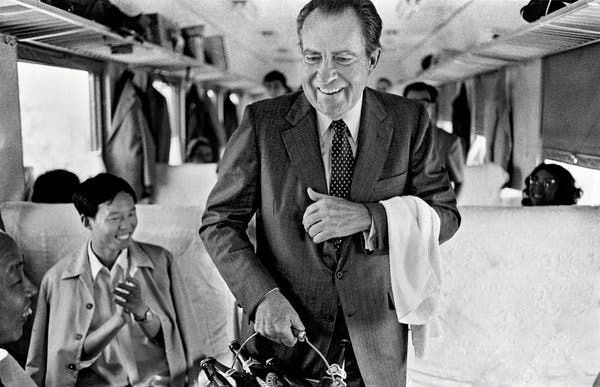 Former President Richard Nixon posing as a waiter aboard a train from Hangzhou to Shanghai during a visit to China to commemorate the 10th anniversary of the signing of the Shanghai Communiqué. 1982. Credit Liu Heung Shing 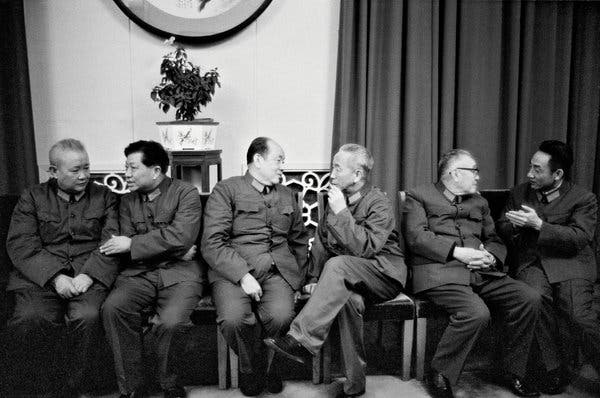 Inside the Great Hall of the People, six regional garrison commanders of the People’s Liberation Army chatted quietly as they awaited a banquet in honor of Harold Brown, the United States’ defense secretary. Beijing, 1980. Credit Liu Heung Shing 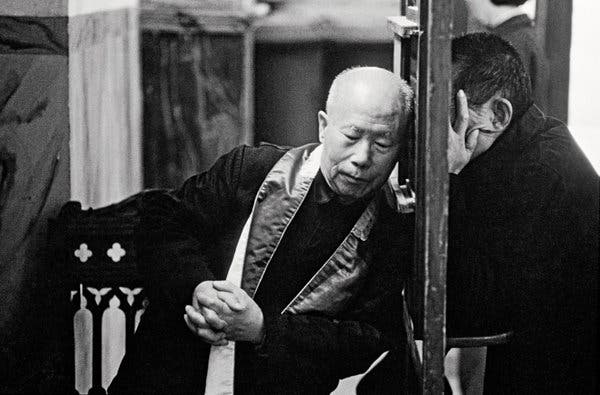 A man confessing to a priest in the Southern Catholic Church in Xuanwumen, Beijing. 1979. Credit Liu Heung Shing

Mr. Liu’s eye for the everyday was influenced by Magnum photographers like Henri Cartier-Bresson, but his earliest childhood memories in mainland China made him aware of the way politics could shape and disrupt the lives of ordinary people. Born in Hong Kong, he moved with his mother to join older siblings in Fuzhou, where the government had seized and subdivided his family’s courtyard home, redistributing sections of it to other residents. His family’s landowner status trailed him in the classroom, where he was singled out from children born to farmers and soldiers. His “political behavior” was never graded above C’s on report cards. When he returned to photograph mainland China after studying and apprenticing in New York, Mr. Liu was seen as an ethnically Chinese outsider and was even exhorted to recite Mao verses before receiving a haircut.

Mr. Liu said that his upbringing made him attuned to the expressions of dignity from people battered by political campaigns in China. In Russia, he covered protests, failed coups and the collapse of the Soviet Union, winning a Pulitzer Prize for spot photography in 1991 with his Associated Press colleagues. “Photographing China, and later Russia, was always about finding a means to convey the profound depths to which politics shaped ordinary lives, every life, no matter how much freedom was sought,” Mr. Liu wrote in an epilogue to his book.

Veering away from daily photojournalism in 1995, he began photographing the movie stars, musicians, modern artists and millionaires who made up China’s elite. Paying homage to Gjon Mili, known for dynamic portraits of Pablo Picasso painting with light, Mr. Liu photographed the artist Ai Weiwei tracing the characters for “freedom” with a flashlight after being released from police detention in 2012. In the final pages of the book, Mr. Liu placed portraits of the wealthy and the successful alongside those of the dispossessed. 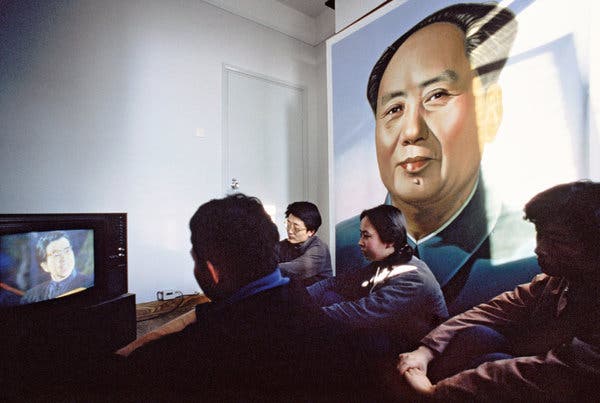 In a private home, young people watching the landmark trial of the Gang of Four, who were accused of plotting to seize power as Mao’s health declined. The trial took place from November 1980 to January 1981. Beijing, 1981. Credit Liu Heung Shing 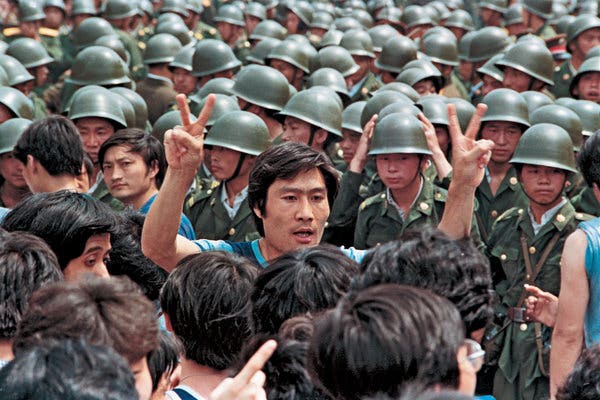 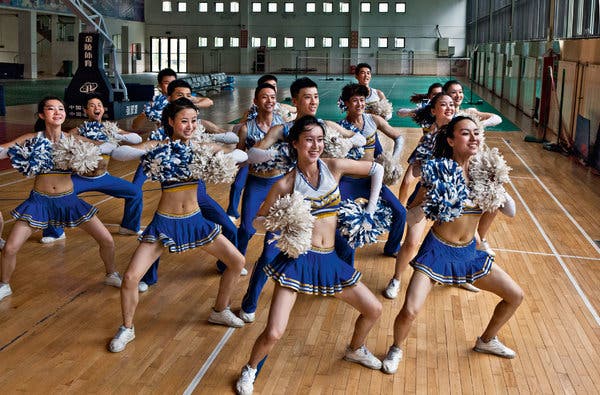 Mr. Liu could also be subversively humorous in photographs that were less overtly political. Two coifed models in Beihai Park sauntered by a dowdily dressed woman bent forward reading on a lawn chair. Three young men in Yunnan Province gazed at the camera through reflective sunglasses and identical Mao caps. A bride rented a veil and a white wedding top in a seated portrait at a Beijing photo studio.

“When you live in a country, you have spring, autumn and winter,” Mr. Liu said. “You have that leisure to learn from all sorts of issues. These are the things that help you tell the story — so that China doesn’t come across as a very monolithic society.” 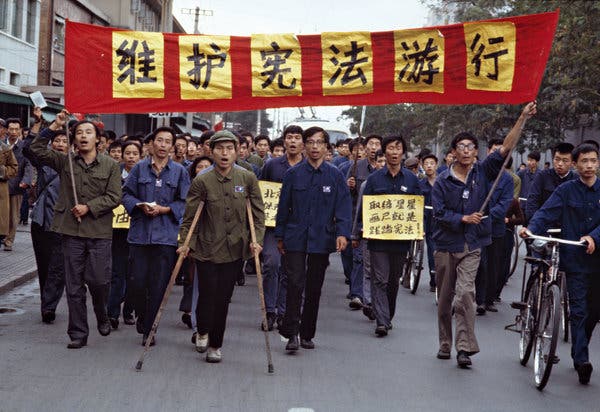 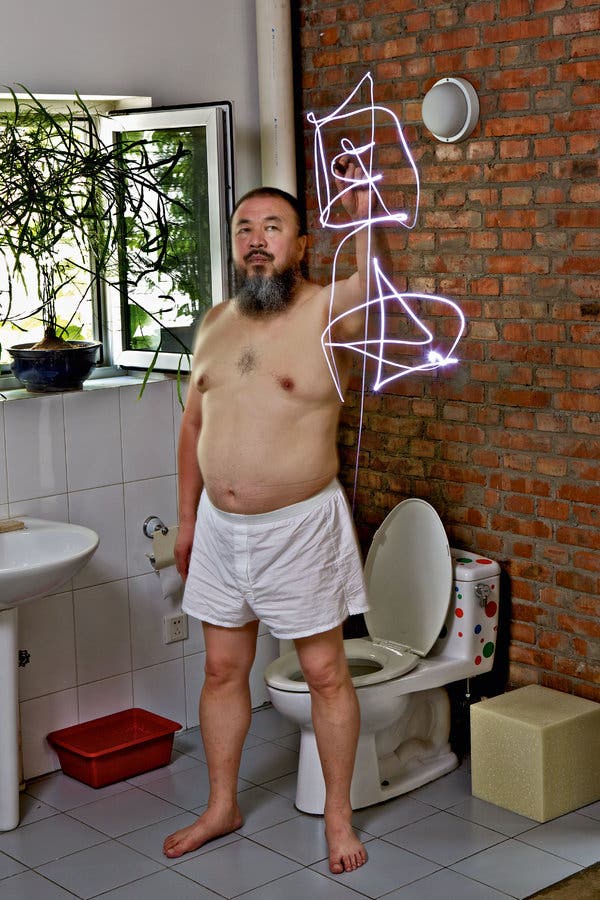