Source: NYT (5/12/19)
In China, a Podcast Inspired by ‘This American Life’ Gives Voice to the Real
By Amy Qin 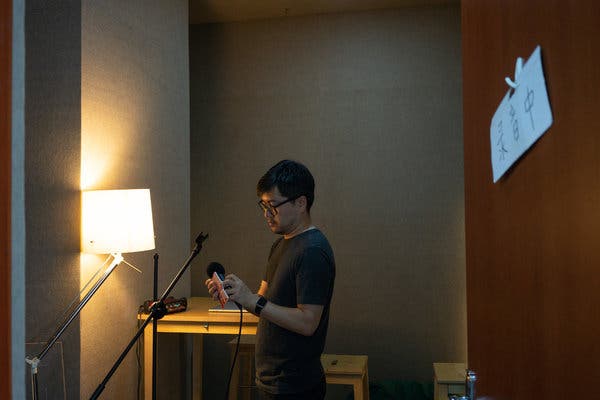 Kou Aizhe, creator and host of the Chinese storytelling podcast “Gushi FM,” says his goal is “to show the complexity of each person.” Credit: Yan Cong for The New York Times

BEIJING — Kou Aizhe, the creator and host of one of China’s most popular storytelling podcasts, has only one criterion for selecting stories.

“Any subject can work,” he said, “as long as it surprises me.”

What emerges is a collection of unusual stories told with an authenticity rarely heard in the country’s tightly scripted, propaganda-heavy state-run media.

A worker for a Chinese construction company describes a harrowing escape from war in Libya in an episode titled “I Shot an AK-47 at Them.” A young man recounts accompanying his ailing father to Switzerland to die by assisted suicide. A lesbian tells of her decision to enter a marriage of convenience to a gay man.

The show highlights stories from both the margins and the mainstream of society. They are tales of loneliness, heartbreak, adventure, betrayal, love, loss and the absurd — stories of a kind not often publicly shared in this age of so-called humblebrag social media.

Since Mr. Kou began broadcasting “Gushi FM” in 2017, it has become one of the most successful audio programs in China’s small but growing podcast movement. In a country of more than one billion people, the program attracts nearly 600,000 listeners and counting. Each month, the program gains about 35,000 new listeners, according to Mr. Kou. 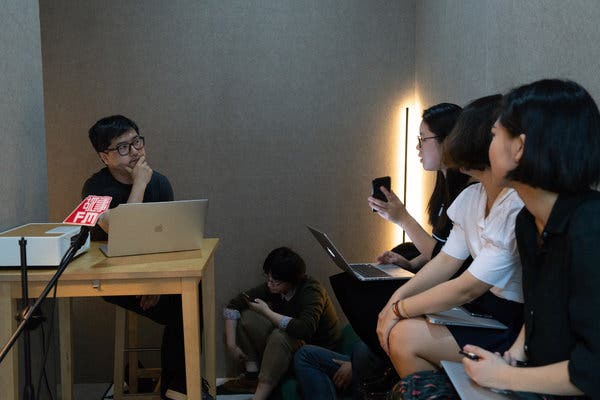 Mr. Kou and “Gushi FM” staff members discussing social media strategy at their Beijing studio. The podcast has more than half a million listeners. Credit: Yan Cong for The New York Times

“These days, I feel like it’s so rare for the media and people around us to speak very honestly,” said Su Da, 35, a researcher based in the central province of Shanxi. “But ‘Gushi FM’ is different. The storytellers bring out the authenticity of our lives. That authenticity is complicated, and it may make us feel uncomfortable, but it is genuine.”

The relatively limited number of listeners for a country of China’s size could be the reason the podcast is able to fly under the radar in an increasingly controlled media environment. In recent months, the Chinese authorities have cracked down on investigative journalists, social media celebrities and seemingly innocuous independent bloggers, part of a broader effort to impose control over China’s information ecosystem.

“Gushi FM” rarely touches on political or newsy topics, but it often deals with social themes that have been subject to media censorship in the past. In one episode, a woman describes learning about sex only after her elementary schoolteacher molested her — a subtle nod to the #MeToo movement. Other episodes have dealt with L.G.B.T.Q. issues, forced relocation and the black market for surrogacy, which is illegal in China.

Of more than 200 episodes, censors have erased only one: a story about a family who went bankrupt because of a peer-to-peer lending scam, which was a fraught topic at the time.

Each episode is around 20 to 30 minutes, and the stories unfold with drama and suspense. The storytelling is not dogmatic; rather, the political context of problems that have emerged after decades of Communist Party rule is simply implied.

One episode, titled “My Cousin Squandered His Family’s Fortune to Buy Four Wives for an Average of 13,000 Renminbi Each,” dives into the story of a rural man’s struggles to find a wife. Not mentioned is that four decades of birth restrictions and a traditional preference for boys have created a large gender imbalance in China, making it difficult for many poor rural men to find wives.

“Through every story, my goal is to show the complexity of each person,” said Mr. Kou. “Especially in the internet era, people are quick to come to judgments about other people based on knowing just one aspect about them. I want to show the different angles.” 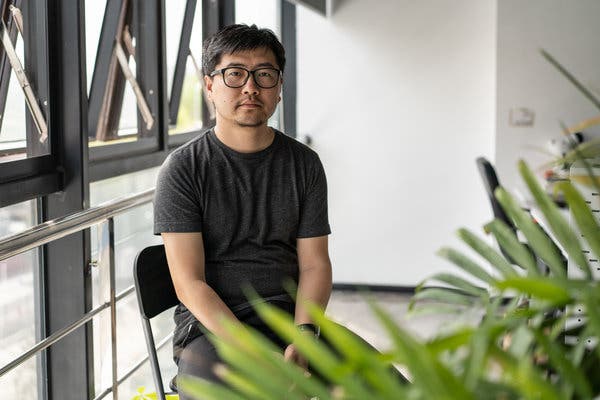 Mr. Kou said Chinese censors had erased only one “Gushi FM” episode, about a family bankrupted by a peer-to-peer lending scam.CreditYan Cong for The New York Times

A trained librarian turned journalist, Mr. Kou is a 36-year-old native of Jilin Province in northern China. He first seriously considered making a podcast while working as a news assistant for a Swedish radio station in Beijing.

“I did many long interviews and the stories were so interesting, but in the end we would only use a few seconds of dialogue for the story,” said Mr. Kou. “It was such a shame.”

Over the past two years, Mr. Kou has built up a team of 10, including journalists, sound engineers and interns. On a recent afternoon, the “Gushi FM” team sat around a large conference table at their sleek office in Beijing, batting around ideas for future episodes.

Ideas for interview subjects included a person who cloned a pet dog, the Chinese translator of the “Game of Thrones” books and a man who was forced to break up with his girlfriend because his parents did not approve of her. Some of the story pitches had come from listeners, others were generated by the team members themselves.

The team works fast to make the three episodes a week mandated by the podcast’s parent company and main financial backer, the popular online content creator Daxiang Gonghui, which publishes articles about history and culture.

“Gushi FM” sells some ads, Mr. Kou says, but it faces a constant struggle for survival. Podcasts have yet to catch on in China as they have in the United States and Britain. Experts say part of the reason is the government’s monopoly on radio in China. Advertisers are still drawn to traditional broadcast stations that hire radio hosts to chat and play music. 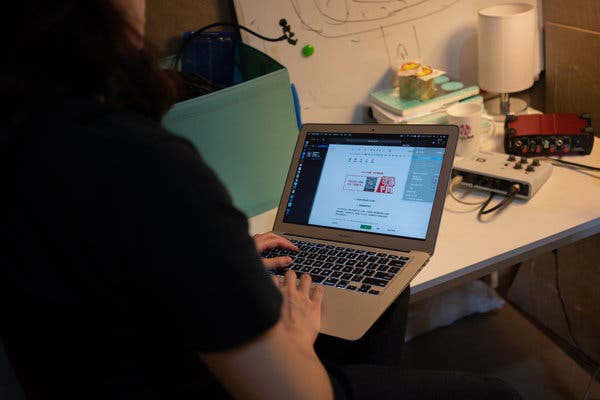 “Gushi FM” is a rarity in a media landscape full of state propaganda and escapist entertainment.CreditYan Cong for The New York Times

Another challenge facing “Gushi FM” is that the show is firmly rooted in reality, warts and all, at a time when many Chinese are looking to tune out daily anxieties. That desire has fueled a surge in escapist entertainment like online live-streaming, Korean television dramas and blogs that churn out feel-good clickbait content.

These exist alongside a powerful state media apparatus bent on promoting “positive energy” by pushing party propaganda, including in forms as unlikely as rap performances and game shows. Even popular audio streaming internet platforms often focus more on promoting self-improvement through educational courses and audiobooks.

For many Chinese, learning about social ills while knowing that little can be done to solve them can feel like a needlessly depressing endeavor.

“When people listen to ‘This American Life,’ they are moved by the storytellers and their stories,” said Yang Yi, the editor of JustPod, a Chinese-language newsletter about the podcast industry. “But an ordinary Chinese listener will think: ‘My life is also very hard, so why should I hear about the hardship of someone else?’”

Yet “Gushi FM” has a niche, and growing, audience. Hearing others describe their struggles and successes in such an intimate way, fans say, is precisely what sets it apart.

“I had a crisis at work and was feeling very lost and panicked,” said Shao Xueyan, 32, formerly an engineer in the northern Chinese city of Tianjin. “But discovering ‘Gushi FM’ was like fate.”

“Through listening to other people’s stories I could reflect on my own life,” she added. “It made me realize that there will always be good things that happen in life as long as you are alive.”