Source: NYT (5/3/19)
May Fourth, the Day That Changed China
Protests in 1919 propelled the country toward modernity. One hundred years later, the warlord spirit is back in Beijing.
By Jeffrey N. Wasserstrom
Mr. Wasserstrom is a history professor specializing in China. A sculpture dedicated to the May Fourth Movement, in Beijing, in 2005.CreditCreditFrederic J. Brown/Agence France-Presse — Getty Images

IRVINE, Calif. — In Chinese, mentioning just two or three numbers can be enough to bring to mind a major historical event. Say “Jiuyiba” (nine-one-eight), and your listeners will know you have in mind not just any Sept. 18, but the one in 1931, when Japanese military officers in Mukden, northeastern China, faked the sabotage of a Japanese-owned railway to give Japan a pretext to invade the whole region. Or say “Wusi,” five-four, and any teenager will understand that you are talking about what happened exactly one hundred years ago this Saturday.

That day in 1919, a student protest took place in Beijing that set off what came to be known as the May Fourth Movement. Soon, similar marches were held in other Chinese cities, joined by members of other groups. The upheaval reached its apogee with a general strike in June that paralyzed Shanghai, then China’s leading industrial center and the world’s sixth-busiest harbor — and also partly under foreign control.

Most extant photographs of May 4, 1919, show several thousand students, men and women, in front of Tiananmen (The Gate of Heavenly Peace), a massive entryway to the Forbidden City, which had been the home of China’s imperial rulers until the 1911 Revolution toppled the Qing dynasty and the Republic of China was established. The demonstrators gathered in outrage over reports about negotiations underway in Versailles, just outside of Paris, over the terms ending World War I. Word was that the Allies planned to give former German territories in Shandong, eastern China, to Japan instead of returning them to China. 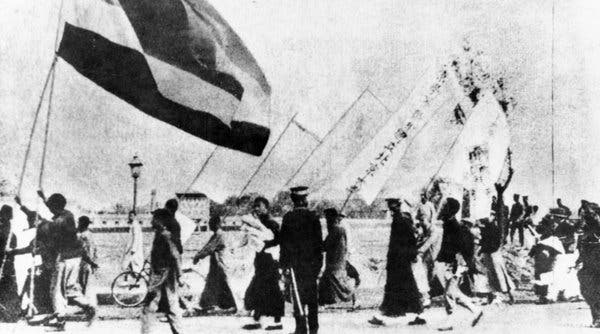 Japan may have been on the winning side, the protesters argued, but China also had joined the Allies. And what about the call for a new era of national “self-determination” by the American President Woodrow Wilson in 1918? What seemed to be in the offing in Versailles looked like yet another instance of grasping foreign powers bullying China — in keeping with, say, the First Opium War, which had ended in 1842 with the British gaining Hong Kong as a colony.

However angry the students were at the foreign negotiators half a world away, though, they were even more upset with their own leaders— military men they thought of as autocratic and corrupt who had failed to protect the Chinese homeland. Already in 1915, students had protested against Yuan Shikai, the most powerful warlord of the day, both for allowing Japan to extend its reach into northeastern Manchuria and for appointing himself emperor of a new dynasty. It was also in 1915 that the young intellectual Chen Duxiu founded Xin Qingnian (New Youth), a progressive periodical that over the next few years would publish numerous essays criticizing imperialism, warlord rule and conservative cultural patterns.

Chen and another New Youth regular, Li Dazhao, inspired the Wusi protesters, and so while the banners held aloft on May 4, 1919, focused on the Shandong issue, they also expressed a broader complaint. China’s diplomatic weakness was only the symptom of a full-body disease, the argument went: If the 1911 Revolution had done away with the antiquated system of imperial rule, China hardly was a modern country yet. To become one, it would need to make a thorough break from hierarchical and conservative Confucian traditions. Instead of insisting that the young defer to the old, and women to men, Chen, in particular, argued that modern Chinese should embrace “Mr. Science” and “Mr. Democracy.”

The rally in front of Tiananmen wasn’t the only significant thing that happened on May 4, 1919. Students attacked the homes of officials they considered especially vile. Officers manhandled and arrested dozens of youths; one was beaten up so badly that he later died of his injuries. 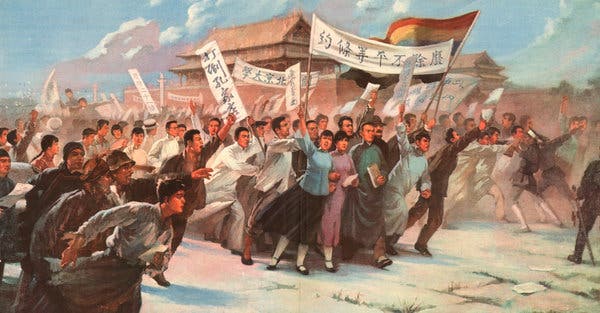 A 1976 painting by Liang Yulong celebrating the May Fourth Movement. CreditLandsberger Collection, via chineseposters.net

China had a long tradition of viewing scholars as people who should speak out in times of misrule. That a student, a scholar in the making, died defending a patriotic cause galvanized members of other groups and social classes to support the Wusi protests. Together, they held more marches, boycotted Japanese goods and organized strikes — until June, when the Chinese government gave in to three key demands.

It instructed its representatives in France to refuse to sign the Treaty of Versailles. It dismissed three officials whom protesters viewed as particularly corrupt. And it released all students who had been detained.

The Wusi protests would fail to achieve their central diplomatic goal: When the Treaty of Versailles went into effect in January 1920, Japan was awarded Germany’s former possessions in China. But the movement nonetheless became legendary for its other achievements — a symbol of the potency of student-led mass action.

Over the decades, it has come to mean far more than that. Much like the date and phrase “Mai 68” in the French political imagination, in China, “Wusi” conjures up the idea of an entire generation, and a special one. 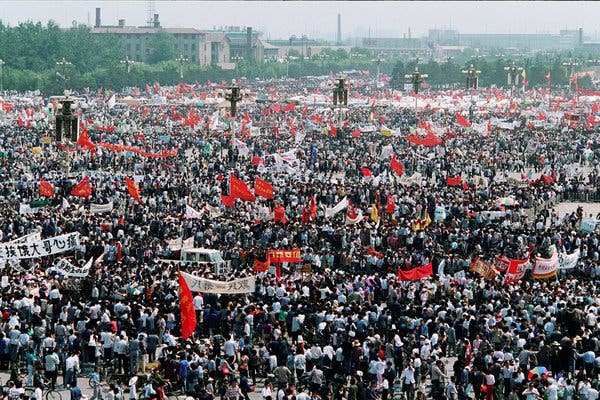 Protesters in Tiananmen Square on May 17, 1989.CreditThe Asahi Shimbun via Getty Images

New periodicals, study societies and political organizations sprang up. The journals ran critical political commentary; experimental works of literature; iconoclastic essays by Chinese intellectuals lambasting traditional values; and translations of works by Western, Japanese and Russian thinkers. The study societies promoted theories from abroad, ranging from the liberalism of John Dewey (who began a lecture tour in China just before the 1919 protests) to various forms of anarchism and socialism.

Li was one of the earliest and most enthusiastic promoters of Bolshevism and its calls to combat imperialism and topple capitalism through revolution. In 1921, he and Chen were among the founders of the Chinese Communist Party. Another founder was a Wusi activist from Hunan and the author of articles attacking Confucian marriage practices for being unfair to women. His name was Mao Zedong.

In the 1930s, when students, supported by underground operatives of the C.C.P. (which was illegal then), took to the streets to demand that Chiang Kai-shek’s ruling Nationalist Party do more to protect China from Japan, they invoked the “May Fourth spirit.” The Nationalist Party also claimed that it best exemplified that spirit. The contest to appropriate the legacy of Wusi was on.

Come 1989, it was the leaders of the C.C.P. themselves — by then long in power — who were targeted by a fresh generation of students calling for a “New May Fourth Movement.”

Once again, the most important site of protests was Tiananmen. In the 1950s, the area in front of the gate had been turned into a square filled with monuments, including one at the center honoring China’s revolutionary heroes. A frieze at the foot of that central structure depicts young men and women taking to the streets in 1919. It was in front of it that the students of 1989 set up their main base of operations.

On May 4 of that year, as the C.C.P. commemorated the 70th anniversary of Wusi inside The Great Hall of the People, to one side of Tiananmen Square, the protesters held a competing event on the plaza. Once again, two opposing political camps were both claiming the mantle of the 1919 movement. Exactly one month later, the People’s Liberation Army rolled in, killing hundreds, probably several thousands, of demonstrators and residents.

What are widely known in the West as the “Tiananmen Square” protests are called “Liusi Yundong,” or the “June Fourth Movement,” in Chinese — a reference to the day of the massacre in 1989, of course, but also an echo of the uprising of 1919.

And yet today, while “Wusi” appears in many online and print publications across the Chinese mainland, “Liusi” is taboo.

Under President Xi Jinping, the C.C.P.’s efforts to control the meaning of the Wusi protests have continued unabated. The movement holds a revered place in official chronologies, as a turning point andthe start of modern times in China. The party, playing on the kind of national pride extolled back in 1919, boasts today that China no longer appeases, but leads, on the international scene.

The C.C.P. does other, less-Wusi, things, too. It has abolished limits on presidential terms and enshrined Mr. Xi’s “thought” in the Constitution. It has punished intellectuals for calling such moves retrograde. On occasion, it has even banned images of Winnie-the-Pooh online, treating them as memes that mock the president’s physique. Chinese feminists have been detained for asking for gender equality. Student activists have been arrested — for, of all things, defending communist values, including the protection of workers’ rights.

When the Chinese government announced in August 2014 that only preselected candidates would be eligible to stand in the next election for the highest executive office in Hong Kong, it set off a string of protests and sit-ins known as the Umbrella Movement that paralyzed parts of the city for weeks. The demonstrators, many of them students, were asking the authorities in Beijing to respect the special rules that govern Hong Kong and that afford it a measure of autonomy and democratic rights unknown on the mainland. The Chinese government never budged.

Joshua Wong, who was just 17 when he became the international face of the Umbrella Movement, posted an elegant message on Twitter a few weeks ago. It featured just three dates — “2014, 1989, 1919” — and three photographs of the historic demonstrations held those years.

On April 24, eight other leaders of the 2014 protests in Hong Kong were sentenced to various prison terms under an unusually harsh interpretation of an outdated and rarely used public-nuisance law. The defendants appeared outside the courtroom, unrepentant and still defending civil disobedience and democracy. On April 28, tens of thousands of Hong Kongers marched to oppose a proposed law that would allow the extradition of locals for trial on the mainland.

Just a couple of days later, Mr. Xi gave a speech celebrating the Wusi generation. It warned that “Chinese youth in the new era must obey the party and follow the party.” The warlord spirit is back in Beijing.

Official celebrations for the students of 1919 will take place this weekend across China — under the auspices of leaders who stand for many policies and values that those students opposed. They don’t seem to realize that the true spirit of Wusi lives on.

Jeffrey Wasserstrom is Chancellor’s Professor of History at the University of California, Irvine, and co-author of “China in the 21st Century: What Everyone Needs to Know.”

The Times is committed to publishing a diversity of letters to the editor. We’d like to hear what you think about this or any of our articles. Here are some tips. And here’s our email: letters@nytimes.com.