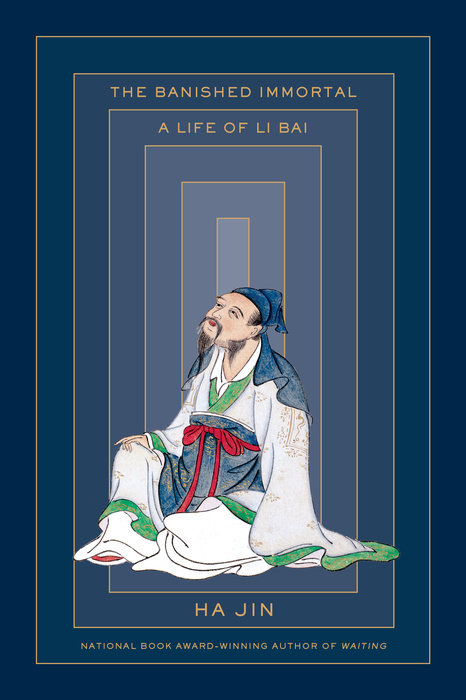 The rumors of how Li Bai (also known as Li Po) met his end are greatly exaggerated. The specifics are murky, ranging from alcohol poisoning to drowning while chasing after the moon’s reflection on the surface of a river. It may seem troubling how easily the pertinent details of one of China’s best-known literary icons are lost. However, given that Li often embellished his speech and never liked to stay in one place for too long, his multiple-accounts demise is oddly appropriate.

So begins Ha Jin’s portrait of the famed poet, The Banished Immortal. This title is the latest entry in Jin’s extensive bibliography of poems, short fiction and novels, but The Banished Immortal is his first foray into biography. Jin boasts accolades primarily for his prose works, with deal with the intermingling of politics and ordinary life in 20th-century China, including the National Book Award-winning novel Waiting. In The Banished Immortal, Jin flexes his fiction-writing muscles and his eye for political detail in order to characterize Li Bai’s showboating personality and to discuss how power and social systems worked in the world he inhabited.

Right after a quick overview of Li’s best-known writings, Jin pinpoints exactly where the historical pieces he will put together will, at some point, come to an end. A solemn reminder begins to shape out the how Li’s career trajectory was tumultuous from start to finish.

Armed with a flair for calligraphy, an artistic drive, and a drinking habit that would make a fraternity brother blush, Li first departed his merchant family around 718 A.D. from his hometown in Sichuan. His aim was to acquire the connections necessary to enter the Tang court. Jin frames this as a challenge, as merchants were in a socially precarious situation; they were moneyed, but not titled. This effectively set Li up as a candidate to vie for a sponsor as a court poet, but did not grant him the family prestige to have a safety net should he fail. Li was also mixed-race (his facial features suggested both Han Chinese and Central Asian lineages) and had no concrete familial ties to upper nobility or royalty. This necessitated talent to set him apart from other aspiring officials. Li turned out to have it in spades.

Equal parts charming and infuriating, Li wrote prolifically and vividly about emotion, human nature, and the world around him, describing not only the lives of the well-to-do, but also of the common people of China. In one poem out of four ‘Midnight Songs’ (子夜吳歌) about the capital, Chang’an (today’s Xi’an), he nimbly takes on the voice of a community of women sewing clothes for soldiers off to defend the empire’s frontier:

In contrast to other translators’ projects, this book utilizes poetry primarily to provide details about Li and the specific place and time he wrote in as a focal point, as opposed to the other way around. Details about the language and distinct qualities of Li’s poetry itself are sparse, which is characteristic of Ha Jin’s pragmatic and utilitarian prose. As such, seekers of detailed literary scholarship and a more specialized analysis of the poems themselves will have to look to other translators and scholars. For general readers interested in the many colorful facets of Li’s work and life, The Banished Immortal furnishes just the right amount of detail on the writing itself.

Li’s ego is the source of both his finest work and his most frustrating relationships. Though he demonstrates an immense capacity for recognizing and conveying the emotions of others, his diva-like tantrums jostled the trajectory of his career. The book’s historical narrative is a busy one, constantly juggling the art that Li Bai created with the character flaws that earned him a multitude of political and personal enemies, and no shortage of job rejections.

Li steps on his own foot whenever he gets the chance to acquire a steady income or succeed in his many social-climbing endeavors. During his posting in Chang’an, Li found himself at odds with the infamous concubine Yang Guifei, a woman who had captured the heart and the whims of the emperor up until her own notorious (and dishy) death. Even in high office, Li could not switch off his larger-than-life personality. One day when the emperor summoned him to compose a poem chronicling a court rite, Li arrived so drunk that he soiled his robes, vomited repeatedly, and demanded that Gao Lishi, the grand eunuch, personally remove his boots. After shaming the emperor’s trusted servant and hastily drinking a hangover cure, “he rose and moved to a table nearby, on which were prepared ink, spread paper, and a pair of brushes. He picked up one and began to write, not about the performance, but about Lady Yang’s beauty.” These antics earn the royal couple’s praise, but did not nullify that he had disrespected the eunuch. Jin’s assessment is that “however prodigious Li Bai’s talent was, in the sovereign’s eyes he was no more than a commoner.” Yang’s dislike for him also factored into the emperor neglecting to protect him from the enemies at court who eventually drove him from Chang’an.

As the events of Li Bai’s life unfurls, it becomes clear that Jin’s aim is to illustrate the nature of the day-to-day drudgery of Li Bai’s quest to build a self-sustaining writing career. The wine and food that fueled his poetry could not simply fall from the sky. This unyielding but pragmatic framing of Li’s dependency on the aristocracy elevates the book from a simple historical summary to one that also frankly interrogates the creative career at the heart of this story. In doing so, Jin introduces an intriguing new way to think about the works by a literary “immortal” who today inhabits the upper echelons of China’s literary canon.

Throughout the book are sprinkled flowery love ballads, earnest expressions of gratitude, and stinging insult-laden missives, many of which are specific to exact points in time. ‘Reflection on a Quiet Night’ (静夜思), perhaps Li Bai’s best-known poem, demonstrates this. It is presented as a broadly-framed poem about nostalgia and yearning for one’s homeland. But to Li himself, when he composed it in the summer of 726, it took on a different meaning. At the time, he was “helplessly stranded” in the city of Yangzhou with only a manservant by his side, his credit running dry, on the verge of eviction. The closing stanza of the poem, “I raise my head to watch the moon, and lowering it, I think of home,” takes on a different meaning when the personal details of its writer are added.

Given what we now know about his ego, Li would have been pleased that he is renowned for his poetry and not for his civil service career. In a preface to his work written by Li’s uncle and publisher Li Yangbing, Li Bai allegedly asked for people to return copies of poems he had written for them, which form the core bibliography of a thousand poems and essays that remain. Knowing his immense pride in having his work stand the test of time, he would have certainly been pleased that the words of ‘Reflection on a Still Night’ are perceived more as universal message than a shame-ridden lament.

The Banished Immortal brings to life the world of Tang Dynasty literature, both in describing its colorful cast of characters and their relatively precarious place within the wider historical narrative. Readers otherwise unfamiliar with Li Bai’s life will pick up quickly that he wrote frenetically without much of a filter between personal and professional. To Li, poetry wasn’t just a job, but an emotional extension of his highest and lowest points. In a world of flowery language where drink flows freely, examining the nadir of a poet who thought himself immortal is a surprisingly sobering opportunity. ∎