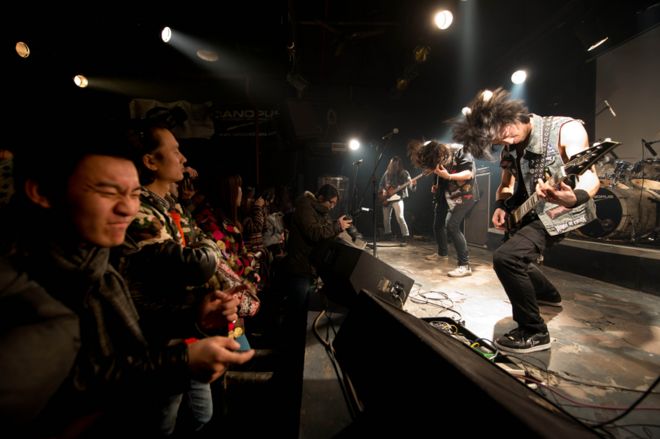 The indie bands of the Chinese capital, Beijing, have their own raw, distinctive sound, says the BBC’s Stephen McDonell – partly because they are so isolated from the rest of the rock’n’roll world.

Local bands are cult heroes in the dive bars of the old city: young people from all round China drift to the capital because this is where alternative music is taken seriously. People will tell you that Beijing is a rock’n’roll city. 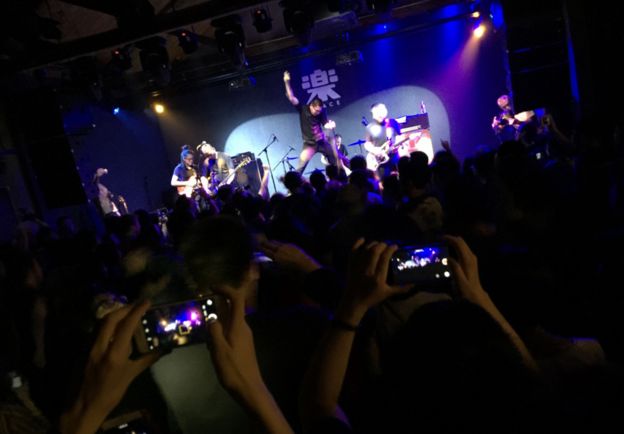 Of course you can hear outstanding symphonies or jazz here. There are plays, there’s dance, and there’s still traditional Chinese music like Peking opera on offer. But the country’s indie bands are dealing with the China of today – meaning, they know they have to be careful what they say and how they say it.

A few years ago you could actually get away with more than you can now. One winter’s night, in a venue which has since closed, a punk band came on. At one point, in between the thrashing guitars, the lead singer declared in English: “The Chinese Communist Party is the mafia!”

An audible wooooooo could be heard around the room as people laughed at the audacity of such a public statement.

Just a few hundred metres south of the bar, a generation earlier, the People’s Liberation Army had rolled in tanks to crush the 1989 student protest movement. Politics here is serious and can get you into trouble.

But Beijing’s music-bar owners seem pretty blase about the prospect of being closed down or arrested because of subversive lyrics. Most musicians seem to know, somehow, the limits of what can be said. They push up against the edge – and when they cross the line, they usually do so in a clever, cryptic fashion. I could provide examples of songs and expressions – but their wordplay can take a while to explain, and it might draw unwelcome attention for the bands concerned. That’s how things are in China.

And let’s not forget, most artists here sing mostly about young love, heartbreak, hangovers, the streets where they live, the people they miss. 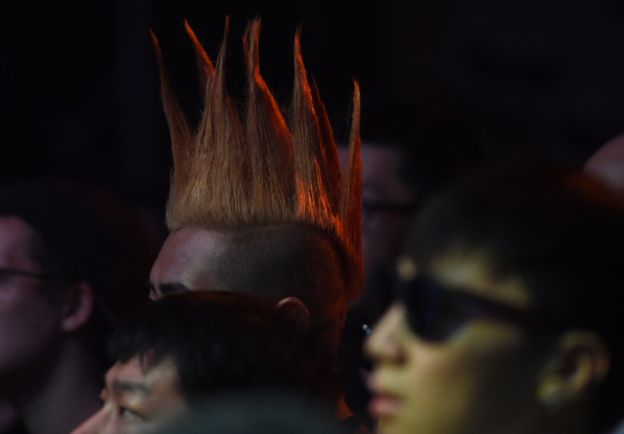 Some will wonder what’s so special about Beijing and bands. It’s not as if the city invented rock’n’roll. What created what we might describe as a “Beijing sound” has been isolation. It’s not that the young rockers of China have never heard of David Bowie or the Foo Fighters, it’s that few international bands play here. So, if you want to go and see some live music, it’s odds-on to be a Chinese band.

Like Sydney’s music scene in the 1980s, Beijing’s today has a special flavour, accentuated by being further away and less visited.

The sound itself is raw, less polished, with mountains of enthusiasm and commitment to nothing more than the love of music for its own sake. 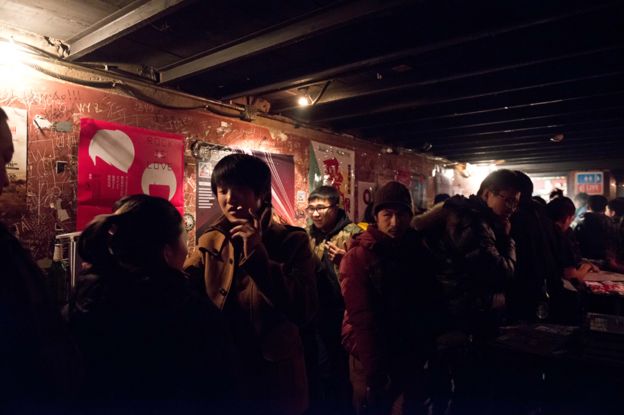 The Mao Livehouse in 2013 – the venue has since closed

There’s a sense that everyone is equal. The most famous band will not necessarily be the headline act. The line-up is often drawn out of a hat and the set lists can be completely random.

One bar owner told me that a government official had visited his venue and his main concern was that patrons had nowhere to sit. He just couldn’t understand why people would want to stand during a performance. Probably best that he didn’t come along to witness a heaving mosh pit first hand. 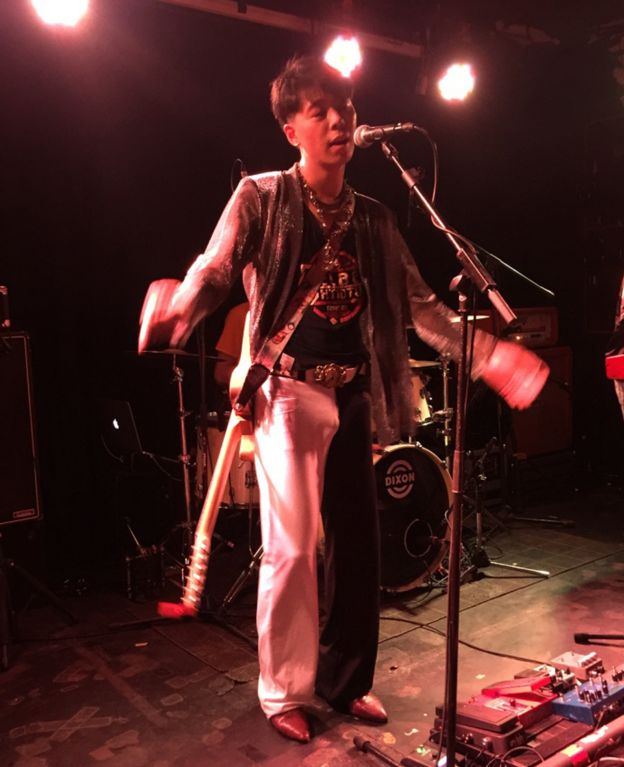 Ricky Sixx has switched from heavy metal to funk – his goal is to be China’s Prince. Image copyright: STEPHEN MCDONELL Image caption

Still, planning permission and licensing laws have been whittling away at the scene, with venue after venue closing its doors.

Once, all you needed to set up a performance space was a room, an amplifier and beer. Not any more. Now you need a proper licence, and the city government has decided to clear many businesses out of the old alleyway, or hutong, neighbourhoods. 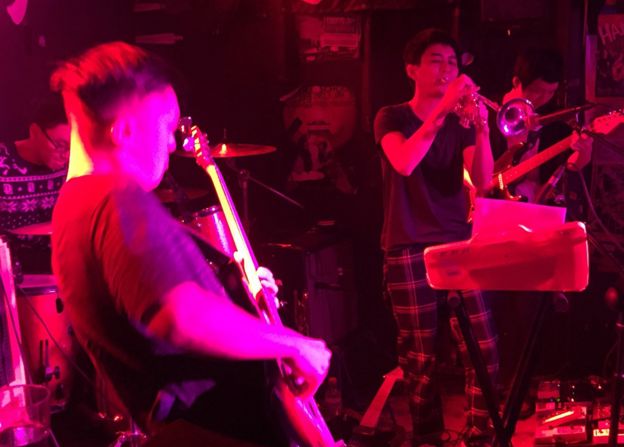 Yet the biggest threat to the Beijing blast is probably rent. The music circuit is mostly in the old heart of the city, where once-rundown spaces have now become sought after, trendy locations. Owners tend to live off-site, and want better returns on their investment.

So running such a venue is a labour of love. But there they are still standing: Yue Space, School Bar, Dusk to Dawn… with live bands playing most nights. 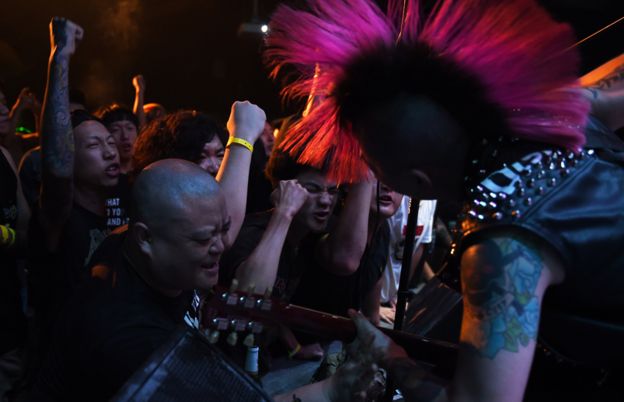 I remember the first time I saw PK 14 play. They’d turn heads at any international music festival. Who did they remind me of? Was it early Talking Heads or Joy Division?

Not really. This nerdy, cool, shaking, high-energy, poetic explosion of music was all their own, with Chinese lyrics pelting out over syncopated drum rhythms and thrashing guitars.

You can’t get this anywhere else: you have to come to Beijing.

I hope it lasts.