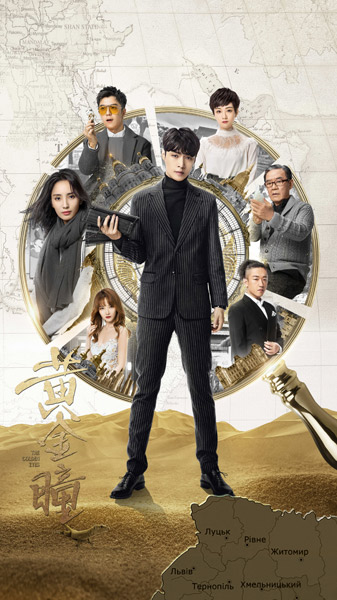 A poster from the online series The Golden Eyes. [Photo provided to China Daily]

When veteran producer Bai Yicong occasionally “clicked” on a fantasy novel online in 2010, he could scarcely have thought that it would one day become one of his biggest-budget productions.

The work of fiction, titled Huangjin Yan, or The Golden Eyes, follows the adventures of a young pawnshop employee, who possesses the power to be able to see the past and future of every object he sees after his eyes are injured by a group of robbers.

Thus the protagonist becomes a legend in the antique world and an easy winner in gambling on stones, the practice of buying a raw rock and then cutting it open, with the hope of it holding some gems.

The story, penned by online writer Tang Yong, better known by his pseudonym Dayan, has accumulated more than 30 million views since its debut on China’s largest internet literature site Qidian in 2010.

“I was deeply attracted by the novel. It has a lot of riveting depictions about underground adventures, enriching my knowledge about antiques,” says Bai, sitting in his office located in eastern Beijing.

But at that time, the adaptation rights for the novel were not available, and it wasn’t until four years later that Bai managed to acquire the copyright.

Now, the 56-episode online series The Golden Eyes is running on streaming giant iQiyi, and has become one of the most-followed hits on the site, which saw its paid subscribers reaching 87.4 million by the end of 2018.

The series has also opened simultaneously in several overseas markets such as Malaysia, Singapore and India, and will be released in Cambodia, Thailand, South Korea and Vietnam in local languages.

For Bai, a veteran producer behind dozens of hits, launching a new project always means starting from zero. 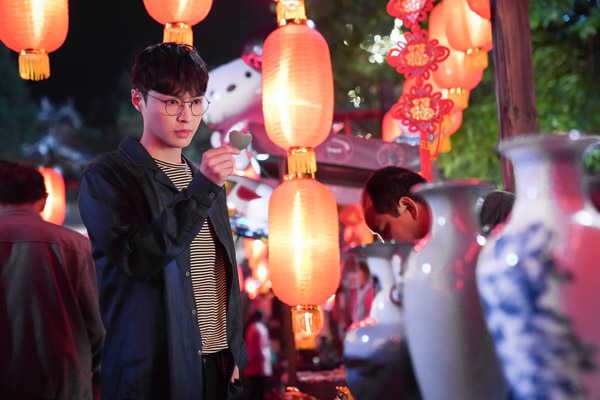 A still image from the series starring pop idol Zhang Yixing, which depicts a fantasy story about a young pawnshop employee. [Photo provided to China Daily]

“Television and the film industry are a bit special. You cannot reuse the formula that succeeded in previous hits, as the audience will get bored,” he explains. So, Bai’s strategy was to make The Golden Eyes a convincing yet eye-popping fantasy story.

As most sequences feature antiques, the crew spent months building a replica of the Panjiayuan Antique Market, a landmark for collectors and traders in downtown Beijing.

The film set–which also included replicas of a Myanmar village, a Beijing courtyard and Mongolian tents–covered an area of nearly 30,000 square meters.

Besides, the crew of nearly 300 members also traveled over 25,000 kilometers to Ruili and Tengchong in Yunnan province; Yinchuan in the Ningxia Hui autonomous region, and Kiev in Ukraine to shoot scenes.

Coincidentally, director Lin Nan is an enthusiast of curios.

“So, when Lin is not busy, he often visits antique markets like Panjiayuan and Gaobeidian. Most of the curios in my home are gifts from Lin,” says Bai.

“We hope the series will also spark interest in Chinese history and culture, as well as raise awareness of antique protection,” he adds.

A graduate from the directing department of the Central Academy of Drama, Bai shot a few independent films in the early 2000s but soon switched to TV dramas, a much bigger industry where it was easier for then struggling Bai to “earn a living”.

He established his reputation from serving as a co-scriptwriter on hits such as director Zhang Jizhong’s martial arts epic Semi-Gods and Semi-Devils, but it was the unprecedented expansion of the internet that pushed him into the upper echelons of online series producers.

Speaking about the future of online series, Bai says that cash-rich investors backed by internet giants invested a lot but also suffered big losses between 2013 and 2015.

So, the fact that financers have turned more cautious in recent years is a blessing in disguise as online series producers are now compelled to tell better stories.