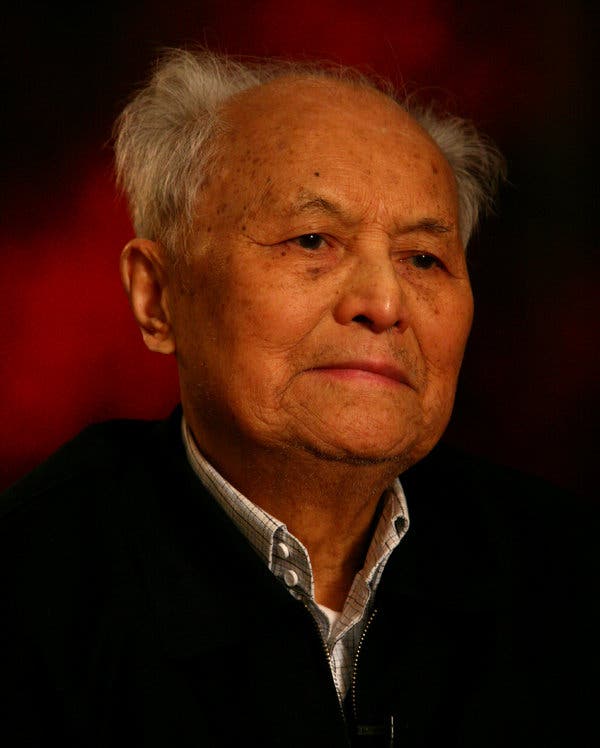 Li Rui, who died on Saturday at 101, “saw himself as a conscience of the revolution and the party,” said Roderick MacFarquhar, the late Harvard scholar of Chinese history. “But he had grave doubts about the system he spent his life serving.” Creditvia Nanyang Li

BEIJING — Li Rui, who over nearly four decades went from being one of Mao Zedong’s personal secretaries in the 1950s to a Communist Party critic, revisionist historian and standard-bearer for liberal values in China, died in Beijing on Saturday. He was 101.

The cause of death was organ failure, brought on by a lung inflammation and cancer of the digestive tract, according to his daughter, Li Nanyang, who spoke with doctors at the Beijing hospital where Mr. Li had been receiving treatment.

Blunt, brash and quick-witted, Mr. Li’s experience epitomized the hopes and disappointments of a generation. His perseverance and longevity made him one of the most influential government critics in the seven-decade history of the People’s Republic of China. His work also helped reshape historians’ understanding of key moments in modern Chinese history — especially Mao’s responsibility for the catastrophic Great Leap Forward, in which famine killed more than 35 million people — while his political connections allowed him to protect moderate critics and make open appeals for free speech and constitutional government.

But Mr. Li was no dissident. He died a Communist Party member, enjoying the privileges that came from having joined the party in 1937, earlier than almost anyone else alive in China. He had a large apartment, a generous pension and lavish benefits, such as top-flight medical care. The party imprisoned him, exiled him, and almost starved him to death, but even when it expelled him he eventually returned in hopes of effecting change from within.

“He saw himself as a conscience of the revolution and the party,” said Roderick MacFarquhar, a professor of Chinese history at Harvard University. “But he had grave doubts about the system he spent his life serving.” (Mr. MacFarquhar died on Sunday.)

Early on, Mr. Li was an enthusiastic party member. He was born in 1917 to a prosperous family in the southern Chinese province of Hunan at a time when the country was being carved up by warlords and foreign aggressors. His father was a member of the Tongmenghui, an underground revolutionary party that helped overthrow the Qing dynasty and establish a republic. He died in 1922, leaving Li Rui fatherless but eager to follow in his footsteps of political activism.

While Mr. Li was a mechanical engineering student at Wuhan University, he participated in a Communist-led student movement to pressure the government to resist Japan’s recent annexation of Chinese territory. In 1937 he joined the Communist Party as an underground activist.

This put Mr. Li in the vanguard of a new generation of idealistic, educated members in the Communist Party, which had been dominated by street fighters and veteran revolutionaries like Mao. Photos of him from this time show a strikingly vigorous young man with the body of an athlete and a square, jaunty face framing two piercing eyes.

After the People’s Republic was founded in 1949, Mr. Li worked in the strategically important Ministry of Water Resources. In 1958 he became its deputy head, making him the youngest vice minister in China.

That same year he reached the pinnacle of his career. Mao was holding a meeting in the southern city of Nanning. One item on the agenda was building the Three Gorges Dam, a massive flood-control and hydropower project on the Yangtze River that would create a vast inland lake and destroy villages and cultural relics for scores of miles upstream.

Mr. Li was a known opponent, and Mao had him flown down from Beijing to debate the issue in his presence. He won Mao over by talking forcefully and simply, and was soon appointed as one of his personal secretaries — making him a powerful gatekeeper to a leader who ruled like an emperor. 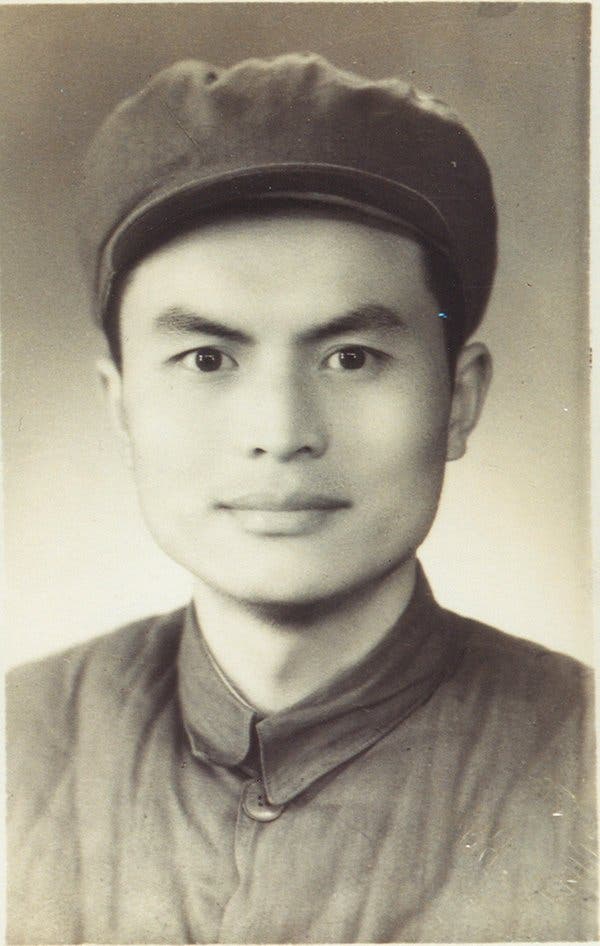 Mr. Li in 1947. Early on, he was an enthusiastic member of the Chinese Communist Party. Credit via Nanyang Li

But Mr. Li’s stint at the top was short-lived. In 1958, Mao embarked on the Great Leap Forward, an ill-conceived dream to leapfrog Western countries through a series of rash economic policies. Soon, farmers began starving to death.

Moderates in the party rallied around one of China’s most famous generals, Peng Dehuai, who tried to slow Mao’s policies and limit the famine. Meeting in 1959 at the Lushan resort in central China, Mao outmaneuvered them — a turning point in modern Chinese history that transformed the famine into the worst in recorded history and helped create a personality cult around Mao.

At a critical point during the Lushan meeting, one of Mao’s personal secretaries was accused of having said that Mao could accept no criticism. The room went silent. Mr. Li was asked if he had heard the man make such a bold criticism. In an oral history of the period, Mr. Li recalled:

Mr. Li was quickly purged. He was identified, along with General Peng, as an anti-Mao co-conspirator. He was stripped of his party membership and sent to a penal colony near the Soviet border.

With China besieged by famine, Mr. Li almost starved to death. He was saved when friends managed to get him transferred to another labor camp that had access to food.

He was soon visited by government inspectors, who said he could have his party membership back if he would admit his errors. But Mr. Li was disgusted at what he had seen at the top.

“I declined because of the Lushan meeting, which involved the highest-ranking members of the party,” he recalled. “To my surprise, not one of them had had the guts to say something fair and just about General Peng. I felt despondent and hopeless. I said I agreed with being expelled from the party.”

In late 1961, Mr. Li returned to Beijing. His daughter Li Nanyang said in an interview that he had dared to speak out despite the totalitarian atmosphere in the Chinese capital. She recalls writing an essay praising the Communist Party for preventing deaths during the Great Leap Forward. Her father upbraided her:

“He said: ‘How do you know nobody died?’

“I stared at him and said, ‘How dare you say that? The newspapers and my teachers said nobody died, so how could you say that?’”

Angry at his stubbornness, his wife of 22 years divorced him, taking their three children. She then denounced him for having made private comments against Mao. In 1962 he was banished to teach in a remote mountain region.

Four years later, Mao launched the Cultural Revolution, which was aimed at overthrowing moderates in the party. Just as at the Lushan meeting, Mao’s own personal secretaries were under investigation for being inadequately radical.

Investigators flew to Mr. Li’s mountain exile. He vouched for all of the secretaries except one, Chen Boda, who was well-known as the most leftist among Mao’s secretaries. It was a nearly suicidal act of defiance against the radical faction around Mao.

A few months later, Mr. Li was sent to China’s Bastille, the notorious Qincheng prison north of Beijing, where he was held in solitary confinement for most of the next nine years. He fought the loneliness by using iodine from the prison clinic to write 400 poems in the margins of the collected works of Marx and Lenin.

“This helped ease my pain and worry,” he wrote in an essay on his 99th birthday. “And helped me keep my sanity.” 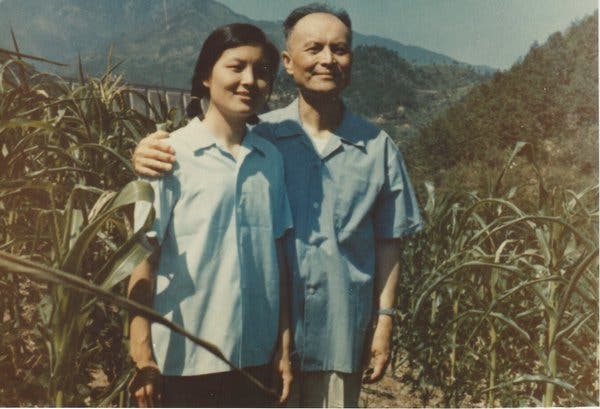 Mr. Li with his daughter Li Nanyang in 1978 in Anhui Province. She said he once upbraided her for writing that the Communist Party had prevented deaths during the disastrous Great Leap Forward.Credit via Li Nanyang

In 1975, he was released from Qincheng but sent back to his mountain exile. It was only after Mao died and Deng Xiaoping took power at the end of 1978 that Mr. Li was given back party membership. He returned to Beijing to rejoin the Ministry of Water Resources. He again opposed plans to build the Three Gorges Dam, teaming up with the journalist and environmental activist Dai Qing to prevent the gargantuan project.

He later was transferred to the party’s influential Organization Department, where he helped oversee the recruitment of new officials. But his career ended abruptly in 1984 when he refused to give special preference to the offspring of senior officials.

“Between choosing telling the truth or a promising career future, he always chose the truth,” Ms. Dai said in an interview. “He has been true all his life.”

That began the most influential stage of his life: elder statesman with a conscience.

He lost the battle over the Three Gorges Dam, which hard-liners pushed through in the wake of the 1989 Tiananmen massacre and the defeat of reformers in the Communist Party.

But he wrote a highly influential book about the Lushan meeting, “The Veritable Records of the Lushan Conference,” which countered the party’s story that the famine was not Mao’s responsibility. He also wrote essays, articles and open letters to senior leaders calling for more transparency and tolerance.

Perhaps most importantly, he became the patron saint of “Yanhuang Chunqiu,” or “China Through the Ages,” an edgy journal that took on sensitive historic issues, such as the Great Leap Famine or the Cultural Revolution, that the Communist Party wanted forgotten.

But Mr. Li’s vision of a more open and democratic China faded. By 2016, Mr. Wu was fired as head of the magazine and it was taken over by hard-liners.

“I’m afraid there was nothing that Li Rui could do,” Mr. Wu said. “It was beyond the ability of one person to protect.”

Mr. Li refused to back down, however, writing critically about President Xi Jinping, China’s most authoritarian leader since Mao. In an essay, he contrasted Mr. Xi with his late father, Xi Zhongxun, who had been known for his tolerance and opposition to strongman rule.

Mr. Li wrote that around 2006 he went to Zhejiang Province, where Mr. Xi was then serving as party secretary. Mr. Xi took him out to dinner and Mr. Li urged him to speak out against abuses in the system. According to Mr. Li, China’s future leader rebuffed him:

“How can I emulate you? You can hover on the fringes” — the implication being that the ambitious Mr. Xi wanted to be at the center of power.

For the Chinese historian Zhang Lifan, Mr. Li epitomized the tragedy of a generation. Many initially saw the Communist Party as China’s salvation, watched as it turned into a dictatorial force under Mao’s nearly 30 years at the top, and then yearned that the reform era would finally bring changes — only to see these hopes dashed by the party’s inability to renounce authoritarianism.

“The ‘China Through the Ages’ incident was a sign that Li Rui and his peers’ dream would never come true,” Mr. Zhang said. “But I understand Li Rui: To deny the party would have meant denying his own life.”