Source: NYT (2/12/19)
In China, This Video Game Lets You Be a Tiger Mom or a Driven Dad
Mete out love and discipline. Set ambitious goals. Endure a teenager’s first dates. Fans say the game Chinese Parents is a surprisingly poignant exercise in role reversal.
By Carolyn Zhang and Raymond Zhong 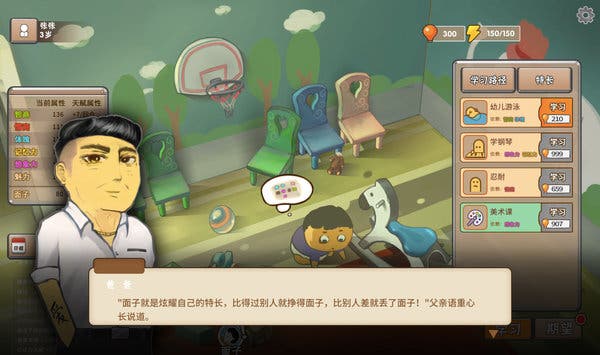 As in real life, maintaining appearances is important in the game Chinese Parents. If your child misbehaves in front of your relatives, you may get upset about “losing face.”CreditCreditMoyuwan Games

SHANGHAI — You want your children to do well in school. You want them to have nice friends and interesting hobbies and to not go out with creeps. You may even want them to be happy.

But in this computer game, you can always start over with a new digital child if things don’t work out as planned.

A new game in China puts players in control of those most fearsome of characters: Mom and Dad. The mission? Raise a son or daughter from cradle to college.

In a nation of famously demanding, scolding and, yes, sometimes loving mothers and fathers, the game, Chinese Parents, is a hit. Since its release in September, it has found a huge audience on Steam, an online marketplace run by the American game maker Valve Corporation. There are no official figures for how many people have downloaded the game, but it has provoked heated discussion online, while earning tens of thousands of reviews.

Yang Ge Yilang, a founder of Moyuwan Games, the independent studio that developed Chinese Parents, said he hoped to produce an English version this year.

The success of the game, which costs $9.99 to play, does not appear to be driven by people hoping to exact revenge for their own upbringings. Quite the opposite: Some fans have written that, by letting them experience childhood from their parents’ perspective, it had moved them to tears.

“I used to not understand many things my mom made me do when I was little,” said Kang Shenghao, 19, a professional blogger in the northeastern city of Qinhuangdao. “But when I play the game and try to boost up figures for my son so he can unlock more achievements and marry the prettiest girl in school, I start to understand my parents more.”

All the joys and trials of raising children are here. Players choose between pushing their digital progeny to attain conventional success and allowing them some semblance of childhood innocence. They must give career guidance and endure (just barely) their teenager’s first dates. Everything leads up to the gaokao, the highly competitive college entrance exam that decides the fortunes of so many young Chinese people.

Mr. Yang said he also hoped to make a smartphone version of the game that allowed players to see how their virtual offspring stack up against their friends’. Chinese parents love nothing more than boasting to their peers about how wonderful their children are.

“We want to give gamers a chance to change the role from Chinese children to Chinese parents and see what would they do in the same position,” Mr. Yang, 30, said.

Parent-child relationships everywhere can swing from reverence to rebellion and back. In China, they are changing as quickly as the nation as a whole.

For many decades, an official one-child policy meant that Chinese boys and girls carried the entire weight of their parents’ hopes for betterment. Population controls have eased (though the game’s children do not have siblings), and economic growth has created more opportunities for advancement. Scoring well on the gaokao is no longer the only ticket to a brighter future. Parents today are more likely to wonder whether unhealthy amounts of stress are turning their children into emotionally dampened automatons. 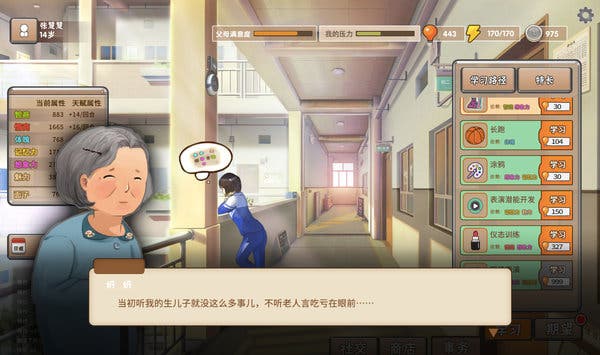 Your grandmother might pop up at points to offer a few antiquated ideas about gender. “If they’d listened to me and had a son, they wouldn’t have so many problems.” CreditMoyuwan Games

But the surge in wealth has also heightened expectations for career success. And it has given the well-off new ways to keep their children ahead of the pack. The high-pressure parenting style brought to wide attention by Amy Chua’s “Battle Hymn of the Tiger Mother” has not gone away in China. It is evolving.

In Chinese Parents, a virtual child’s life unfolds over 48 rounds. In each round, players arrange courses and activities — piano lessons, swim classes, creative writing, coding and more. You can also buy gifts: ice cream, toys, even “Learn to Speak With Jack Ma,” a book featuring the billionaire co-founder of the Chinese e-commerce giant Alibaba.

A bar on the screen reflects how much psychological pressure the child is feeling. Pile on too much schoolwork, and the child may crack. But don’t let your score for “parental satisfaction” fall too low, either. Another score captures the concept of “face,” supremely important in Chinese culture. If a child loses face by doing badly in school, a summer trip to Europe could be canceled.

Over time, adolescent love bubbles up. How far does that go? Let it just be said that Chinese censors do not abide video games considered less than wholesome.

A child’s final scores determine what happens after she leaves home. There are more than 200 colleges, including vocational schools and elite universities, that might offer a spot. The socially adept have their pick of compatible mates. There are myriad career possibilities: taxi driver, celebrity author, e-commerce mogul, Beyoncé.

The earliest version of Chinese Parents gave players only the option of raising a son. In the current version, those who choose to have a daughter get reminders about attitudes that remain common in China. Her virtual grandmother says girls don’t need to do as well as boys in school. Her mother says that for a girl, the ultimate goal of hard work is to marry a good man.

After playing Chinese Parents, Mr. Kang, the blogger in Qinhuangdao, showed it to someone who ought to be an authority on Chinese parents: his mother, Zang Wenru. 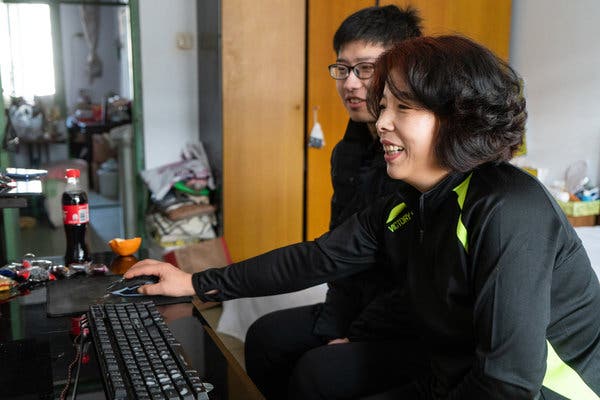 Mr. Kang playing the video game with his mother, Zang Wenru, at home in Qinhuangdao, China. CreditYan Cong for The New York Times

He uploaded a video of his mother playing the game to the streaming platform Bilibili. It has been viewed more than 590,000 times.

“We want to make decisions that we think are best for our kids, and to help them avoid detours,” said Ms. Zang, 51, who works in a hotel. “But I think what many seem to forget is that every step counts in life, even the detours. We all used to be Chinese kids, too, with thoughts that we want to be respected.”

Chinese Parents does not end when the digital child is grown. If she ends up with good character scores and a solid education and career, the next generation in the game starts out with better character scores.

On the flip side, “if you mess up the first generation, it will be harder for the following generations to make outstanding achievements,” Mr. Yang, the game’s developer, said.

Kong Qingxun, a 21-year-old blockchain entrepreneur in the southern city of Guangzhou, has raised eight generations of sons in the game. He let the first boy play lots of soccer and video games. But he didn’t get into college, so Mr. Kong changed his approach.

He drove his next son hard in school, earning him admission to the famed Tsinghua University in Beijing. From then on, it was easier for Mr. Kong to keep his boys on a path to accomplishment. By the seventh or eighth generation, his children were so gifted that they could goof off yet still excel academically and date pretty girls.

“At the beginning, you think it’s just a 100-meter run,” he said, referring to life. “Then you realize it’s a marathon. And finally you understand it’s a relay race that never ends.”

Raymond Zhong is a technology reporter. Prior to joining The Times in 2017, he covered India’s fast-moving economy from New Delhi for The Wall Street Journal. @zhonggg