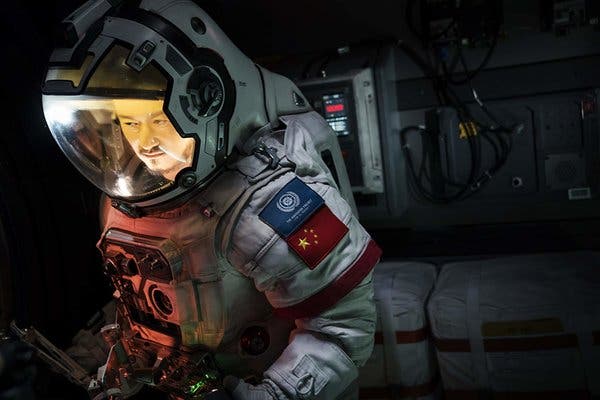 Wu Jing in a scene from “The Wandering Earth.” The actor contributed money to the budget.CreditCreditChina Film Group

The country’s first blockbuster set in space, “The Wandering Earth,” opens Tuesday amid grandiose expectations that it will represent the dawning of a new era in Chinese filmmaking.

It is one in a series of ambitious, big-budget films tackling a genre that, until now, has been beyond the reach of most filmmakers here — technically and financially. Those movies include “Shanghai Fortress,” about an alien attack on Earth, and “Pathfinder,” about a spaceship that crashes on a desert planet.

“The Wandering Earth,” shown in 3-D, takes place in a distant future in which the sun is about to expand into a red giant and devour the Earth.

The impending peril forces the world’s engineers to devise a plan to move the planet to a new solar system using giant thrusters. Things go very badly when Earth has to pass Jupiter, setting off a desperate scramble to save humanity from annihilation.

A preview of the film.CreditCreditVideo by Gavin Feng

The special effects — like the apocalyptic climatic changes that would occur if Earth suddenly moved out of its cozy orbit — are certain to be measured against Hollywood’s, as ever here. And the preliminary reviews have been positive.

“It’s like the coming-of-age of the industry,” Zhou said.

“The Wandering Earth” opens with the Lunar New Year, the beginning of an official, weeklong holiday that is traditionally a peak box-office period in China. It has a limited release in the United States, Canada, Australia and New Zealand.

At home, it will compete with “Crazy Alien,” a comedy inspired by “E.T. the Extra-Terrestrial” about two brothers hoping to capitalize on the arrival of a visitor from outer space.

Both “The Wandering Earth” and “Crazy Alien” are adapted from works by Liu Cixin, the writer who has led a renaissance in science fiction here, becoming the first Chinese winner of the Hugo Award for the genre in 2015.

His novels are sprawling epics and deeply researched. That makes them plausible fantasies about humanity’s encounters with a dangerous universe. Translating them into movies would challenge any filmmaker, as the director of “The Wandering Earth,” Guo Fan, acknowledged during a screening in Beijing last week.

That has made the film, produced by Beijing Jingxi Culture & Tourism Company and the state-owned China Film Group Corp., a test for the industry.

Guo, who uses the name Frant Gwo in English, noted that Chinese audiences have responded coolly to many of Hollywood’s previous sci-fi blockbusters. Studios, therefore, have been wary of investing the resources required to make convincing sci-fi.

The film’s budget reportedly reached nearly $50 million, modest by Hollywood standards but still significant here in China. More than 7,000 people were involved in the production. Much of it was filmed in the new Oriental Movie Metropolis, an $8 billion studio in the coast city of Qingdao, built by the real estate and entertainment giant Dalian Wanda.

“I really hope that this movie will not lose money at least,” said Guo, whose previous film, “My Old Classmate,” was a romantic comedy. “As long as this one does not lose money, we can continue to make science-fiction films.”

The popularity of Liu’s novels could help. So could two recent Hollywood films, “Gravity” and “The Martian.” Both included important plot twists that, not incidentally, cast China’s space program in a positive light, and both were huge hits here.

The openings also come as China reached a milestone in space: the landing of a probe on the far side of the moon in January. Although decades behind Russia and the United States, China has now put astronauts in orbit and has ambitious plans to join — or even lead — a new age of space exploration.

“I think there is a very close connection between Chinese cinema and the nation’s fortunes,” said Sha Dan, a curator at the China Film Archive, who moderated a discussion with Guo.

He cited the most popular film in China last year: “Operation Red Sea,” an action drama loosely based on the Chinese rescue of several hundred civilians from Yemen when war erupted there in 2015.

“When we have the ability to go to war, we can make movies like ‘Operation Red Sea,’” he said, alluding to China’s military modernization in recent years. “Only when China can enter the space era can we make works like ‘The Wandering Earth.’”

Unlike “Operation Red Sea” or the two “Wolf Warrior” movies, which featured a Rambo-like hero battling Western villains, “The Wandering Earth” is not jingoistic, though it does star Wu Jing, the hero of the “Wolf Warrior” films, who put up his own investment in the project. He plays an astronaut aboard an international space station who has to contend with a HAL-like computer.

Guo said he consciously avoided making Wu’s character a do-it-alone superhero. The fight to save Earth is fought instead by an ensemble, including an affable Russian cosmonaut who explains why his country prohibited alcohol in space, at least officially. (To say more would be a spoiler.)

“The Wandering Earth” takes for granted China’s central role in future space exploration, but it also has a vision of the international collaboration necessary to cope with the threats facing the planet, a theme that runs deeply through Liu’s fiction. Liu, who attended a screening last week, noted that science-fiction films in China dated as far back as the 1930s, when the director Yang Xiaozhong made ones like “Exchanged” and “Visiting Shanghai After 60 Years,” but those were largely forgotten here after the Communist revolution in 1949.

A 1980 movie, “Death Ray on Coral Island,” was a campy, propagandistic flop. There have been few attempts since.

“This is mainly because Chinese society is relatively closed and conservative,” Liu said in a written response to questions. “There were not the conditions for science-fiction movies to have an impact.”

A film project based on Liu’s best-known work, the trilogy that began with “The Three-Body Problem,” was optioned and even filmed in 2015 but has since languished in postproduction, reportedly because of technical challenges and costs.

The conditions now seem ripe. Seeing the “The Wandering Earth” on the screen, Liu said, was “soul shaking.”