Source: SCMP (1/30/19)
Chinese grindcore band with pig for a lead singer, Pig Cage squeals discontent with the government
Pig Cage, a grindcore band from Inner Mongolia, uses pig sounds instead of human vocals. The band’s creator, Maihem, says he didn’t like the sound of his own voice, so he decided to use a porcine substitute
By Lauren James 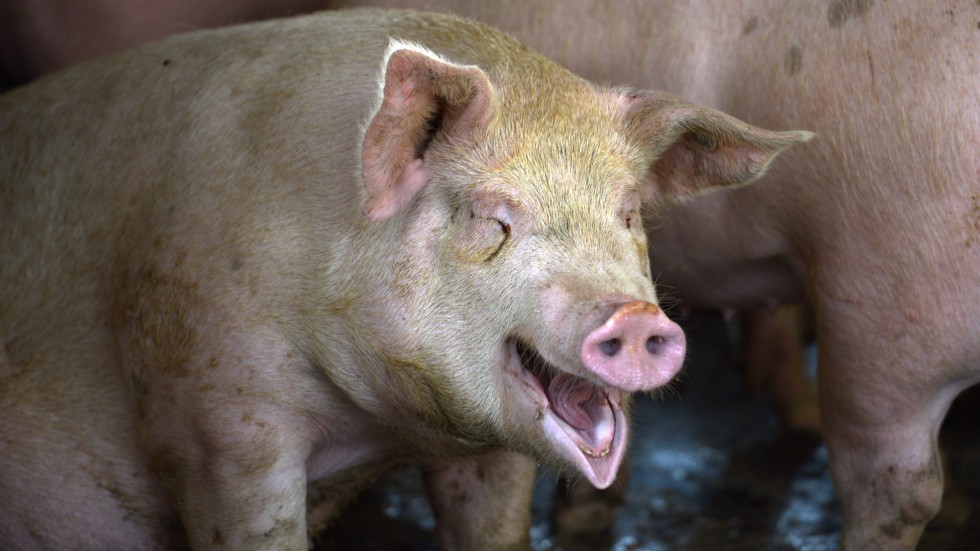 Pig Cage is a Chinese grindcore band with a difference: its lead singer is a pig. Photo: AFP

Squeals and grunts are part of every metal band’s musical lexicon, and now one act from China is hogging the limelight with a novel approach. Meaty blast beats, muddy breakdowns and oinking vocals are elements that are not exactly unusual to grindcore – an extreme branch of the metal genre – but there’s a twist in the tail: this particular band is fronted by a pig. The name? Pig Cage.

The man behind Pig Cage is a graphic designer and musician, known only as Maihem (which he pronounces “ma-heem”), who expresses his disgruntlement with the Chinese government by sampling a splenetic swine on his album “Screaming Pig in China”. Pig Cage’s “lyrics” may be indistinguishable, but the sentiment is clear: Maihem has an abattoir’s worth of axes to grind.

He continues: “There is lots of unfairness and adversity in China … Most of time I feel disappointed about myself and life; I would rather be a pig.”

Released last year, Pig Cage’s full-length debut hams it up with a rollicking maelstrom of porcine fury, executed with a sense of humour characteristic of grindcore groups, which typically choose graphic and provocative names, song titles and lyrics. (Infant Annihilator and Prostitute Disfigurement are among the printable ones). With bona fide bangers such as Pornographic Legend, Psychotic Lover and Dissection (Sepsism), the nine tracks on “Screaming Pig in China” stay true to the genre, using sex, gore and black humour to lance social and political concerns.

Like other bands fronted by non-humans, such as Hatebeak, which features a parrot on the mic, and the New York band Caninus, which features duelling dog barks, Pig Cage proves its chops, combining brutal gutturals with a relentless guitar grind. The album’s second track, Syringe of Meat, whips distorted revving with a hog’s agitated howls; Paranoid Personality Disorder has a distinct rhythmic bounce; the six-second Chinese Band is sudden frenzy of sound ending with a burst of flatulence, echoing grindcore’s British forefathers, Napalm Death, and their highly influential, yet comically brief album “Scum”.

Maihem hails from Hailar, a city in Inner Mongolia, a large region of northern China known for its mining industry, arid grasslands and hard core winters. With the region’s rich reserves of beryllium, zirconium and niobium, metal literally forms the bedrock of life on the steppe. 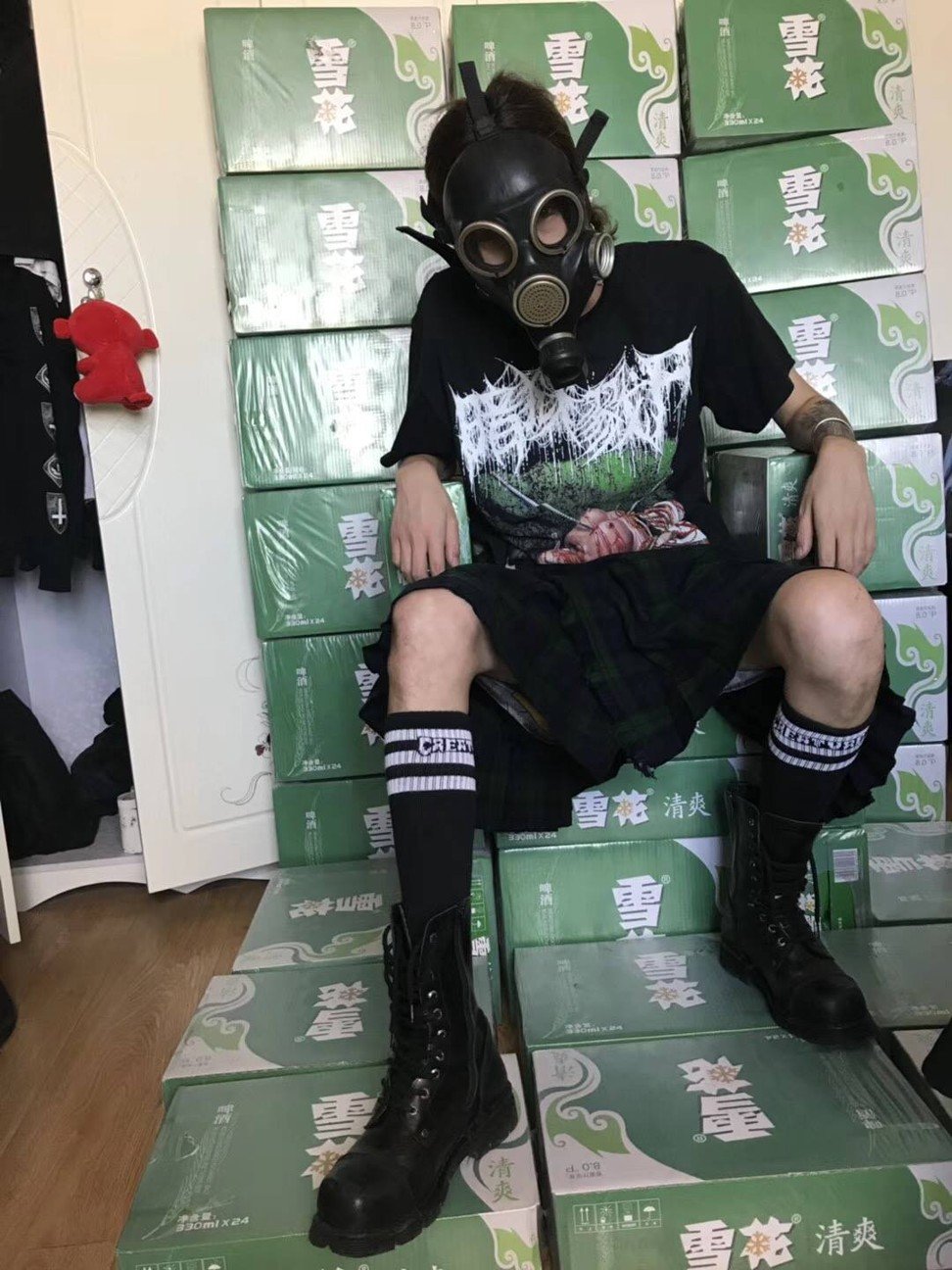 Maihem, the man behind Pig Cage, is a graphic designer and musician. Photo: Maihem

Around 10 years ago, Maihem, a long-time lover of heavy metal music, began producing his own black metal tracks, but found his work wasn’t connecting with fans. He figured a lack of context was the problem. “Black metal focuses on religious stuff, which is lost on a lot of Chinese people, as they don’t have religion to understand the themes,” he explains.

His proclivity for swine-based songwriting aside, Maihem is no boar: instead of choosing a more mainstream sound, the artist found appeal in grindcore’s “comedy and sexual themes”, he says, and began funnelling his creativity towards the unorthodox project.

The idea of using pig sounds instead of human vocals was born, in part, out of Maihem’s lack of confidence in his own singing abilities.

Although much of the inspiration for the songs comes from his dissatisfaction with the Chinese Communist Party, he feels that decoding the meaning behind the songs isn’t essential to the Pig Cage listening experience.

“It just sounds very cool; people can enjoy how it sounds without thinking about anything political,” Maihem says.

Instead of having one identifiable lead “singer”, Pig Cage’s vocals, somewhat disappointingly, are the collaborative efforts of a number of animals: a mixture of field recordings from Maihem’s home province (the artist is vague on details of exactly how he obtained those squeals) interspersed with sounds found online.

“If I wasn’t satisfied with the sounds I got from real pigs, I turned to sample noises on the internet,” the musician explains.

Using pig sounds to convey his ire is not just a gimmick; it may be a nifty way of evading government detection – Maihem’s openness in admitting his dissidence in interviews notwithstanding, he swears he doesn’t feel in any danger.

The Chinese government is vigilant in cracking down on any expression of dissent or any indication of opposition to China or communism. International touring groups who book tours in the country must submit their intended set lists and lyrics, which are combed through by government officials for any sign of anti-Chinese sentiment.

High-profile cases involving performers who have flouted the rules – intentionally or otherwise – serve as sufficient motivation to others to toe the line. Katy Perry, Jay-Z, Lady Gaga, Miley Cyrus, Justin Bieber and Oasis are all unwelcome in China for a variety of reasons, including having vocalised their support for Tibetan freedom, foul language in their lyrics, or a reputation for rebellion. Even Metallica, who toured China in early 2016, ended up stripping some of their best known anthems from their set list to avoid ruffling feathers.

Pig Cage is a fun and ultimately harmless experiment by an irreverent millennial, and as such is symptomatic of a generation that pushes boundaries by flouting the rules by using creative ways to express disquiet through homophones and metaphors, and finding sanctuary for their ideas on the internet.

Although he hasn’t found much demand to play live just yet, nor fellow collaborators to perform with, the artist says he’ll continue making music and that his future works might not be limited to swine-based songwriting – he is open to inspiration from elsewhere in the farmyard.

“I’m from Inner Mongolia,” he chuckles. “There are animals everywhere: horses, sheep, cows …” Hungry fans will wait with excitement to hear what he trots out next. 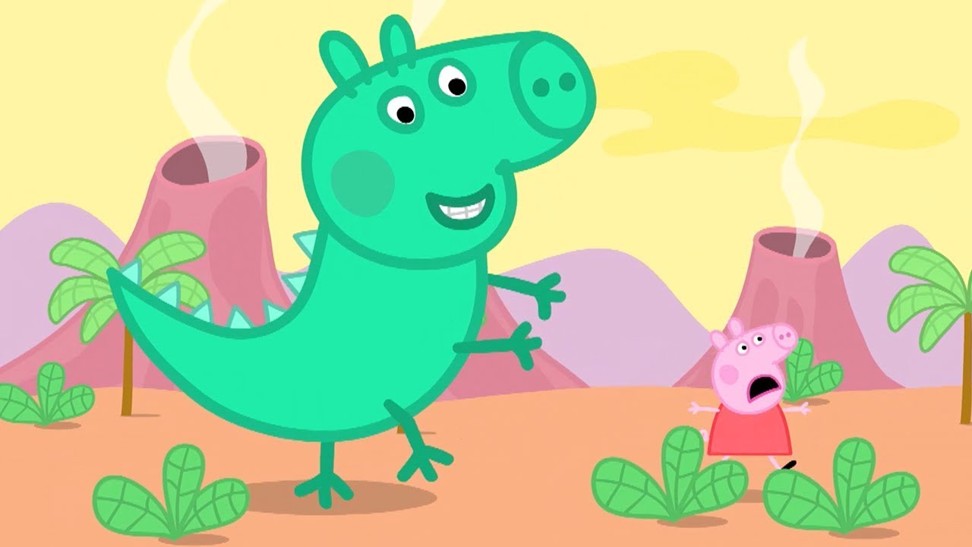 Peppa Pig was banned by the Chinese government.

From Peppa to Piglet: pigs and politics

Pigs symbolise many things in Chinese culture: traditionally, they represent luck and prosperity, and denote sincerity, generosity, naivety and a good sense of humour when used to describe a person. More than 500 million pigs – half the world’s swine – are reared and eaten in China every year, comprising 70 per cent of all meat eaten in the country.

For thousands of years, pigs have been central to Chinese family life, cuisine, culture and the country’s economy: the pictograph for “home”, 家, derives from a roof with the partial character for pig beneath, and Neolithic noblemen were buried with pig skulls as both a symbol of their wealth and talisman of luck for the afterlife.

“From the wealthiest noble or merchant to the humblest peasant, the pig stands out as a unifying force in Chinese culture and an integral aspect of Chinese social and economic interactions,” writes Joshua J. Mark in the Ancient History Encyclopedia. The pig’s significance in Chinese society has made the animal a recurring metaphor in art and satire.

Recently, the animal has taken on political connotations: Winnie the Pooh’s Piglet was among characters from A.A. Milne’s children’s tales used to mock Chinese politicians, and images of Peppa Pig became shorthand for a growing counterculture of work shy citizens. The circulation of both was swiftly banned by the satire sensitive government.

As women in China find their voice and push back against the patriarchal order, The Story of Yanxi Palace, the most Googled show in the world in 2018, gave rise to the meme “Men are all pigs’ feet”, circulated by viewers disgusted by its male characters’ chauvinistic behaviour, as the phrase for “male protagonist” is a homophone for “male pigs’ feet”. 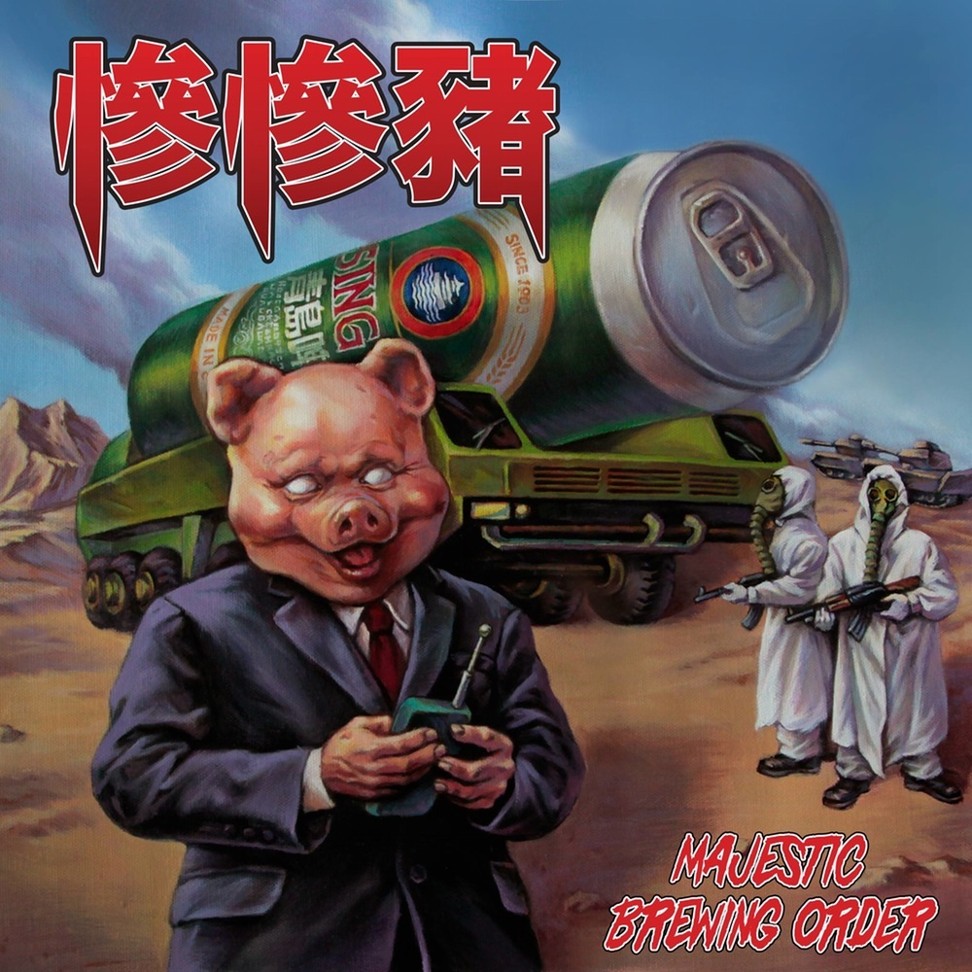 The pig “symbolises state capitalism”, the band explained, and served as an allegory for Hong Kong’s reliance on water from the Dongjiang, or East River, in southern China for much of its water supply.

Describing the artwork as “black comedy”, the band explains in the liner notes that “The pig leader has full authority on ruling the country … all the citizens are forced to drink beer [sic]. It reflects the real situation in Hong Kong …. [The] Chinese Government [forced the] Hong Kong Government to buy the Dongjiang’s water. We, the citizen, are [forced] to pay for the Dongjiang’s water.” 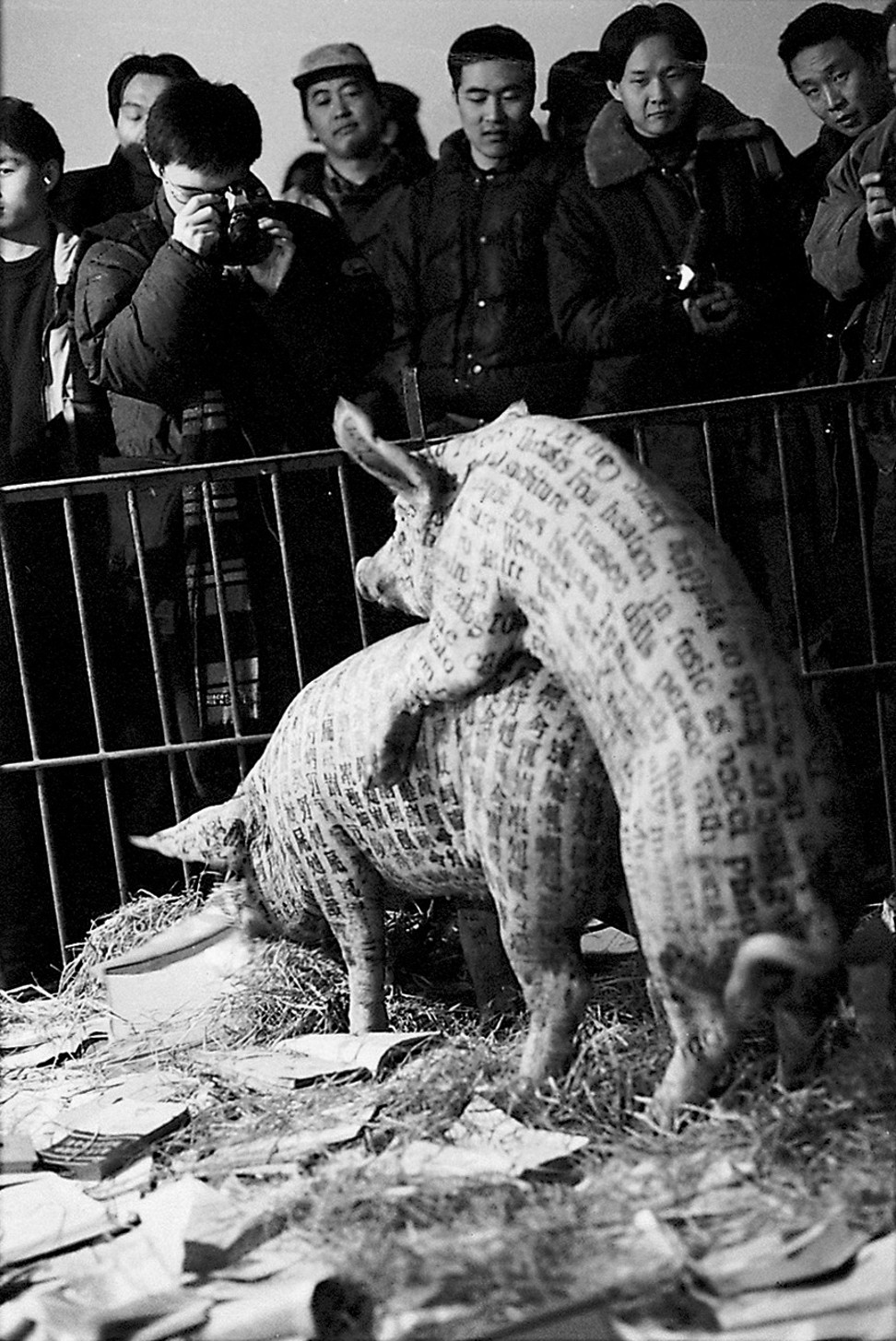 Chinese artist Xu Bing started a debate in the art world in 2017 after his piece A Case of Transference, one of several controversial works in a Guggenheim Museum exhibition of post-1989 Chinese art, brought an outcry from animal rights activists.

Xu’s work is a video of a 1994 performance in which two pigs stamped with nonsensical words – one in English, one in Chinese – mate in front of an audience. A satirical take on the collision between East and West, the boar, with English writing, is seen mounting the sow, which is covered in Chinese calligraphy.

A former farmhand, Xu, who came of age during the Cultural Revolution, uses his work to spotlight life in China after Maoist policies were dismantled and the nation opened up to outside influences. The work was removed from exhibition, only to be reinstated later. Just as Pig Cage uses the cage metaphor to explore freedom in China, the prominent Chinese cartoonist Rebel Pepper, also known as Wang Liming, likened his relocation from China to the United States as escaping a “prison” of complacency in an interview with US public radio news show PRI’s The World.

Pigs raised in captivity “think they live a carefree life because people feed them”, he said. “But one day, they will be slaughtered.”