Source: NPR (1/29/19)
Analysis: Why A Chinese Leader Told The Story Of ‘A Devil And A Demon’
By Pallavi Gogoi 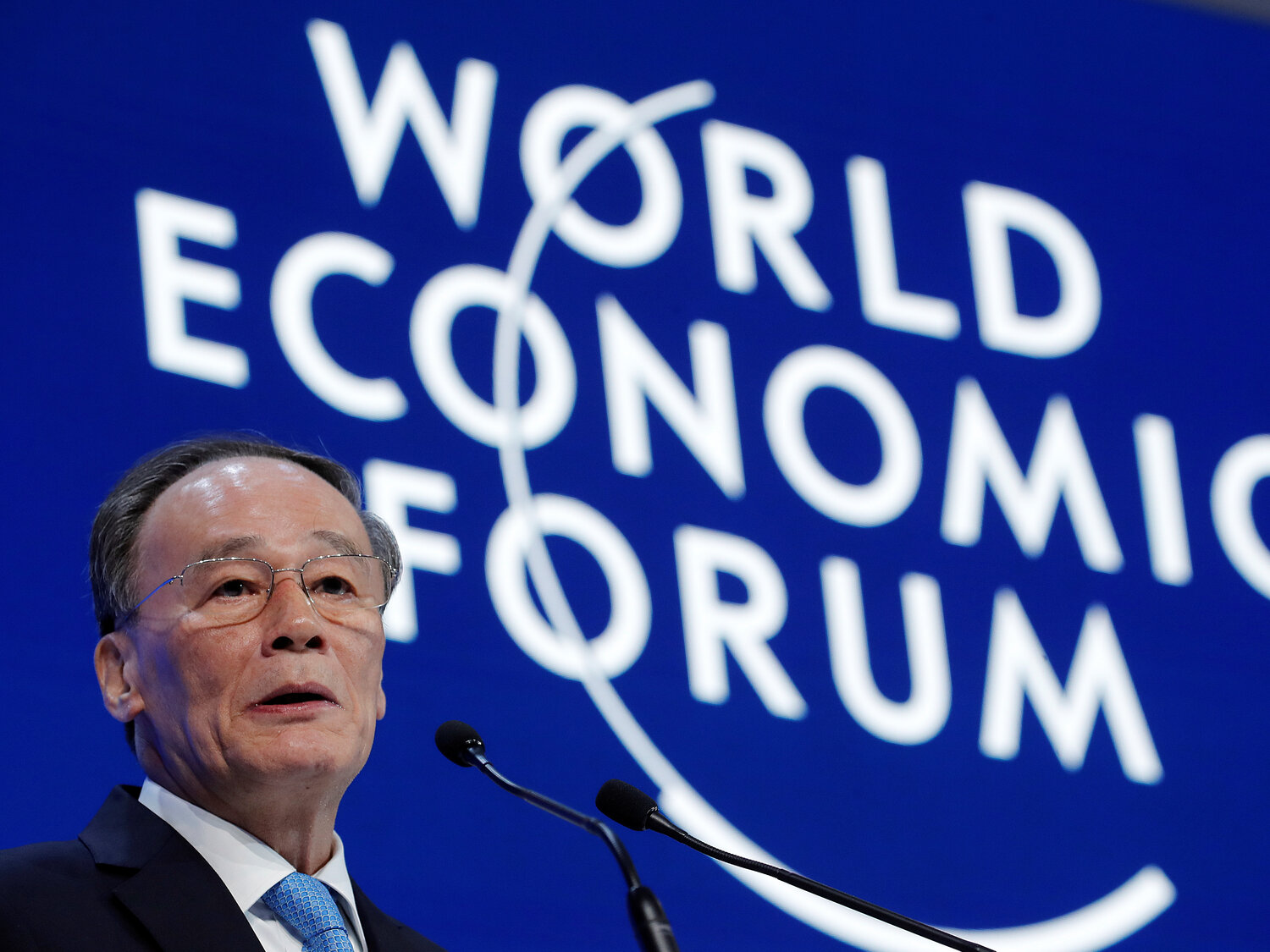 Chinese Vice President Wang Qishan speaks at the World Economic Forum annual meeting in Davos, Switzerland. His message: The U.S. shouldn’t expect too much from China when it comes to cracking down on intellectual property theft. Arnd Wiegmann/Reuters

China’s Vice President Wang Qishan likes parables. He offers tales from ancient China when he wants to make a point.

I discovered that last week at the World Economic Forum at Davos, Switzerland, where Wang spoke and I listened intently on the translation headsets provided by the forum.

“In Chinese history, there was a story of a devil and a demon,” Wang said. He prefaced this by saying it’s a story he would often narrate to his former colleagues at the central bank where he oversaw financial supervision.

The minute I hear Wang say “devil and demon,” I look quizzically at my colleague Gregory Warner, host of the NPR podcast Rough Translation. He seems just as mystified as me. To us, both words kind of mean the same. But we both instinctively know there’s a lesson in this story.

Wang then continues by saying the ancient tale is analogous to that of a policeman and a thief. He says it’s impossible for the police to always be ahead of the thieves and be at the scene of a theft before it occurs. “In that case, there will be no thieves in the world.”

To expect that, he said, would be “idealistic” and “too good to be true.”

Wang’s story seems directed at the United States. After all, it’s an answer to a question about U.S.-China trade relations.

Add to that the fact that just a day earlier, U.S. Secretary of State Mike Pompeo had talked about theft in an address to the same gathering via video beamed in from Washington.

Pompeo said the U.S.-China trade relationship will be determined by not just the free and fair democratic principles that America stands by, but “the capacity for American businesses to operate in China without risk that their trade secrets and their intellectual property will be stolen.”

Pompeo pointed out that when American companies are forced to transfer their technical know-how in China, “those aren’t fair arrangements,” and that America is rebalancing its relationship with China along those lines.

Catch 60 percent of the thieves

Wang continued his story by saying that “if 60 percent of the thieves could be caught and things stolen could be recovered, then we will have significantly fewer thieves. But if there are no thieves at all, that will be too good to be true.”

If Wang uses these parables not just for the sake of a story, but for a purpose, then his message was intended to set the stage for trade talks, set for this week in Washington, D.C., between his country and the United States.

Wang’s message? The U.S. shouldn’t expect too much from China when it comes to cracking down on intellectual property theft. The U.S. could stop some of it but it can’t stop it all. In fact, that is not how the world works.

This message is not going to sit well with Pompeo or with U.S. Trade Representative Robert Lighthizer, America’s chief trade negotiator. Lighthizer is slated to sit down Wednesday with a top delegation from China led by Vice Premier Liu He.

In December, Lighthizer told NPR that American innovation is “the lifeblood of the American economy.” In the interview with All Things Considered, he said “failure to protect intellectual property” is a serious problem.

If Pompeo talked about rebalancing the U.S.-China relationship, Wang too touched on imbalances.

Wang pointed to the backlash against globalization faced by many Western countries as a major imbalance. He had plenty to point out.

The Davos meeting was happening in the midst of an anti-globalization backlash. In France, people in “Yellow Vests” swarmed the streets of Paris and other cities to protest a fuel tax hike. But soon it was clear their concerns stemmed from a broader discontent and feeling left behind in an elitist, globalized world. Brexit was fueled by similar sentiments as was the “America First” rhetoric.

Wang said the imbalances of globalization create clear winners and losers. And the angry responses of people left behind are “inevitable.” However, it is the job of these countries to make “the pie bigger” and “strike a better balance.”

Wang then went on to expound on Charles Dickens’ A Tale of Two Cities, and the opening line in the book: “It was the best of times, it was the worst of times.” Wang said the lessons from that line have held true over time dating all the way back to Ancient Rome and Greece.

We asked Rough Translation producer Jess Jiang, who is fluent in Mandarin, to help us understand Wang’s devil and demon story? She said they represent the bad and the good, which is why the thief and the police is a useful analogy.

In Jess’ translation, Wang ends his story this way: “To say there are no thieves, is an impossibility.”