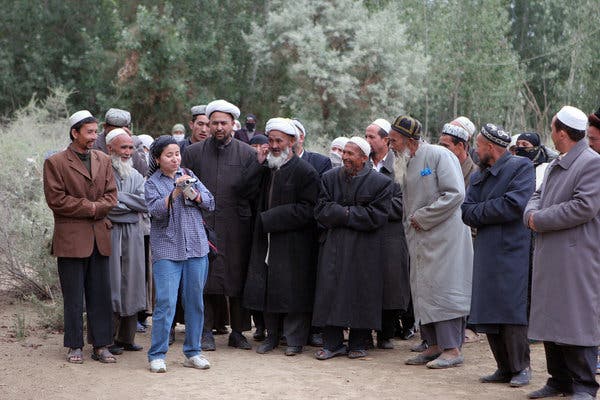 Rahile Dawut, above with camera, is an anthropologist at Xinjiang University who studied Islamic shrines, traditional songs and folklore. She was detained in December 2017 and has not been heard from since. Credit Lisa Ross

ISTANBUL — As a writer and magazine editor, Qurban Mamut promoted the culture and history of his people, the Uighurs, and that of other Turkic minority groups who live in far western China. He did so within the strict confines of censorship imposed by the Chinese authorities, who are ever wary of ethnic separatism and Islamic extremism among the predominantly Muslim peoples of the region.

It was a line that Mr. Mamut navigated successfully for 26 years, eventually rising to become editor in chief of the Communist Party-controlled magazine Xinjiang Civilization before retiring in 2011.

“My father is very smart; he knows what is the red line, and if you cross it you are taken to jail,” said his son, Bahram Sintash, who now lives in Virginia. “You work very close to the red line to teach people the culture. You have to be smart and careful with your words.”

Then last year, the red line moved. Suddenly, Mr. Mamut and more than a hundred other Uighur intellectuals who had successfully navigated the worlds of academia, art and journalism became the latest targets of a sweeping crackdown in the region of Xinjiang that has ensnared as many as one million Muslims in indoctrination camps.

The mass detention of some of China’s most accomplished Uighurs has become an alarming symbol of the Communist Party’s most intense social-engineering drive in decades, according to scholars, human rights advocates and exiled Uighurs.

As the guardians of Uighur traditions, chroniclers of their history and creators of their art, the intellectuals were building the Central Asian, Turkic-speaking society’s reservoir of collective memory within the narrow limits of authoritarian rule. Their detention underscores the party’s attempts to decimate Uighur identity in order to remold the group into a people who are largely secular, integrated into mainstream Chinese culture and compliant with the Communist Party, observers say.

The Chinese government has described the detentions as a job training program aimed at providing employment opportunities for some of the country’s poorest people. But a list of more than 100 detained Uighur scholars compiled by exiles includes many prominent poets and writers, university heads and professors of everything from anthropology to Uighur history.

“The fact that highly educated intellectuals and academics and scientists and software engineers are being held in these facilities is one of the best counterarguments to authorities’ claims that this is some kind of educational program meant to benefit Uighurs,” said Maya Wang, a Hong Kong-based researcher for Human Rights Watch.

The removal of high-profile Uighur scholars familiar with the Chinese government, and the country’s education and legal systems, is aimed at erasing not only the group’s unique ethnic identity but also its ability to defend such traditions, said a Uighur professor now living in Istanbul who asked not to be identified because of possible risks to family in Xinjiang. 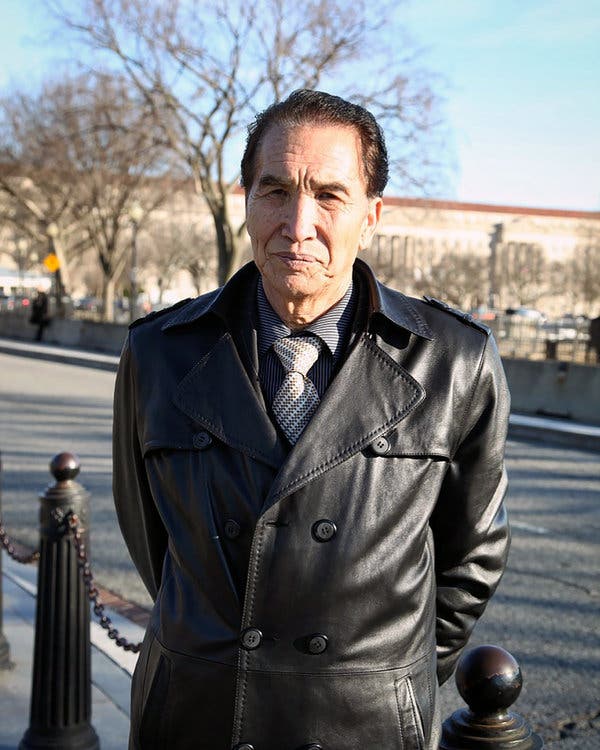 Qurban Mamut, a magazine editor in Xinjiang who has been detained. “My father is very smart; he knows what is the red line,” his son said. Credit Bahram Sintash

Many scholars trace the assault on intellectuals to the imprisonment of Ilham Tohti, a Uighur economist, in 2014. Mr. Tohti, who was an outspoken critic of the discrimination Uighurs face in China, was sentenced to life in prison after being found guilty of separatism.

More detentions came in 2017. Many of those targeted worked on preserving Uighur culture.

Rahile Dawut, one of the most well known of the disappeared Uighur academics, is an anthropologist at Xinjiang University who studied Islamic shrines, traditional songs and folklore. Ms. Dawut was detained in December 2017 and hasn’t been heard from since.

Before the crackdown, the Uighur intellectual elite offered a bridge between the body of Uighur society, who number about 11 million and are largely poor farmers, and the much wealthier Han Chinese, who dominate economic and political power. The scholars also worked carefully to try to improve the lot of a group that complained of widespread discrimination and draconian restrictions on religious activity.

These scholars offered a moderate path, where Uighurs could maintain religious and cultural practices without turning to extreme and isolationist ideas, said Rune Steenberg, a postdoctoral researcher at the University of Copenhagen.

“This is the really big tragedy about the clampdown,” Dr. Steenberg said. “They were actually bridge builders of integration of broader Uighur society into modern Chinese society and economy.”

Many young Uighurs have been inspired by the scholars’ accomplishments, said Erkin Sidick, a Uighur engineer who went to the United States for graduate school in 1988 and now works on telescopes for NASA’s Jet Propulsion Laboratory. Mr. Sidick said hundreds would attend informal talks he gave on pursuing graduate degrees and many closely studied a book he published that compiled biographies of Uighur academics.

Now, Uighurs keep a grimmer list of Uighur intellectuals — those who have disappeared in the current campaign.

Tahir Hamut, a Uighur poet who lives in Virginia, began working with other Uighur exiles to collect the names of those detained over the past year based on news reports and information from families and classmates. The list has now grown to 159 Uighurs and five others from other minority groups.

“These people are all the most prestigious in Xinjiang,” Mr. Hamut said. “They are models who all study diligently and raise themselves up. Their arrest is a great injury, a great attack to all Uighurs.”

The Chinese authorities have accused Uighurs in official positions of being “two-faced,” or mouthing the official line in public but resisting the crackdown in private. Such labels have surrounded the removal of several top administrators at universities in Xinjiang. 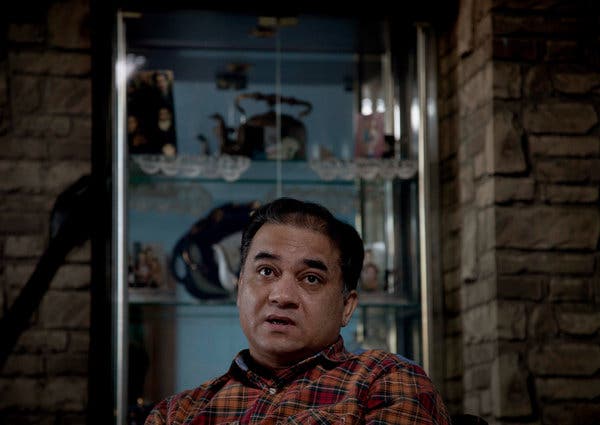 Many scholars trace the assault on intellectuals to the imprisonment of Ilham Tohti, a Uighur economist, in 2014.CreditAndy Wong/Associated Press

The Xinjiang government propaganda department and the news office for the State Council, China’s cabinet, did not respond to faxed requests for comment. But officials in Xinjiang have clearly stated their resolve to pursue people they see as hindering efforts to rewire Uighurs and steer them from what authorities have called religious extremism.

“Break their lineage, break their roots, break their connections and break their origins,” wrote Maisumujiang Maimuer, a religious affairs official, in a commentary in the state news media. “Completely shovel up the roots of ‘two-faced people,’ dig them out, and vow to fight these two-faced people until the end.”

The campaign has not spared scholars who expressed support for the party, such as Abdulqadir Jalaleddin, a scholar of medieval Central Asian poetry at Xinjiang Normal University who worked to preserve Uighur culture and identity.

“He was a very moderate man who always tried to give a balanced view, so much so that a lot of Uyghur nationalists accused him of selling out to the regime,” Rachel Harris, who studies Uighur music at the School of Oriental and African Studies in London and has known Mr. Jalaleddin for more than a decade, said in an email. (Uyghur is an alternative spelling of Uighur.)

Despite that declaration, he was detained in January 2018, according to overseas Uighur organizations.

“So many moderate intellectuals have been detained now,” Dr. Harris said. “I don’t know how else to understand this, except as a deliberate policy to deprive Uyghurs of their cultural memory.”

It is a pattern that has repeated itself in the far western region. The authorities targeted Uighur intellectuals after the People’s Liberation Army occupied Xinjiang in 1949, and even before in the late 1930s, when Xinjiang was ruled by a Soviet-backed warlord, said Ondrej Klimes, a researcher with the Oriental Institute of the Czech Academy of Sciences who studies Xinjiang and the Uighurs.

“It makes the community easier to be subjugated, more cooperative, more docile,” Dr. Klimes said. “You have this whenever an authoritarian regime comes, they first target intellectuals.”

By detaining so many influential figures, the government appears to be acknowledging that its efforts to woo Uighurs to accept the primacy of the Chinese state have failed, and that it must use more forceful methods, Dr. Steenberg said.

“The government has lost,” he said, “and now like a chess player about to lose, it swipes the board.”