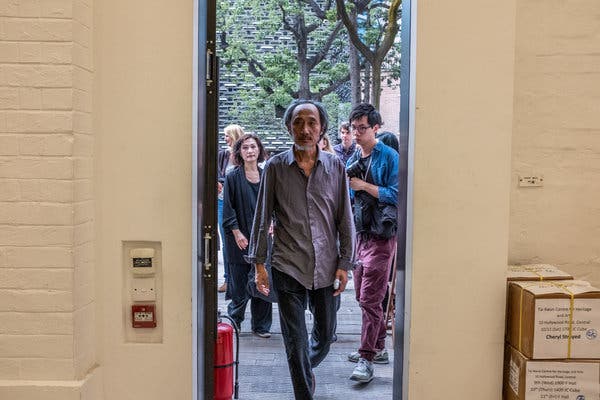 “Only in literature can we fully express the injustices of society, the extremes of human nature and our hopes for a beautiful future,” said Ma Jian while he was in Hong Kong for the annual literary festival. CreditCreditLam Yik Fei for The New York Times

HONG KONG — Ma Jian, an exiled Chinese novelist who lives in London, took the stage at a packed Hong Kong theater last month and asked the audience a question: Who among them had read “1984”?

Mr. Ma, 65, was at the annual Hong Kong International Literary Festival to promote “China Dream,” his satirical novel about President Xi Jinping’s eponymous domestic propaganda campaign. He told the crowd that the book, published last month in English (Counterpoint will offer it in the United States in May 2019), showed how the dystopian future that George Orwell’s fiction once warned about had become a reality in the Chinese mainland under Mr. Xi’s leadership.

“I’m going to carve this book in stone and bring it to Orwell’s grave,” he said, before reading a passage from it that he had copied onto his iPhone.

“China Dream” is a sharper political allegory than Mr. Ma’s earlier novels. It crackles with bruising satire of Chinese officialdom, and an acerbic wit that vaguely recalls Gary Shteyngart’s sendup of Russian oligarchs in “Absurdistan,” or even Nikolai Gogol’s portraits of Russia’s provincial aristocrats in “Dead Souls.”

Yet even for Mr. Ma, whose work is banned in mainland China, the novel is especially provocative because it makes a critique that is rarely uttered aloud these days by ordinary Chinese: that censorship and repression under a Xi-controlled Communist Party bears an eerie resemblance to that of the Cultural Revolution.

“Although he’s been living in exile for more than 30 years, Ma Jian’s depiction of China in his writing hasn’t been frozen in time,” said Maura Cunningham, a historian of modern China based in Ann Arbor, Mich., who interviewed Mr. Ma on stage at the Hong Kong festival.

“In ‘China Dream,’ Ma blends fact and fiction to explain how Xi Jinping and the party are enacting violence against, and even attempting to eradicate, the collective memory of China’s recent history,” she said. 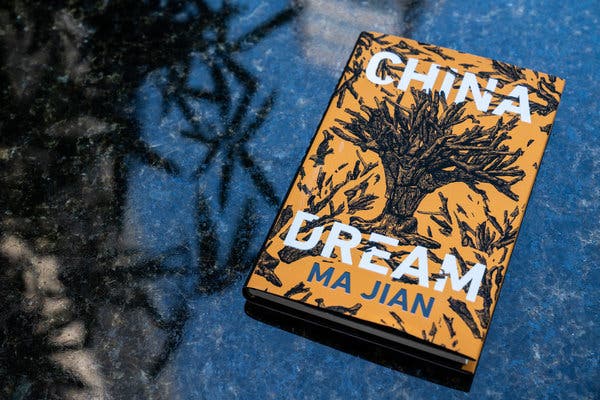 Ma Jian’s “China Dream” has been published in an English translation in Britain, and comes out in the United States next year.CreditLam Yik Fei for The New York Times

As if to underscore the novel’s message, Mr. Ma’s appearance at the literary festival was briefly canceled by the host venue, which said it did not want to “become a platform to promote the political interests of any individual.” Many people in Hong Kong saw it as yet another sign of declining freedoms in the semiautonomous Chinese city.

The venue, the Tai Kwun Center for Heritage and Arts, ultimately reversed course after a public outcry. But by the time Mr. Ma touched down here, his trip had became a sort of live demonstration of the struggle for free expression in China, as well as a test of whether his safety in this former British colony was guaranteed. (A few Hong Kong booksellers who sold banned political books disappeared in 2015 and later turned up in custody on the Chinese mainland.)

Flora Drew, Mr. Ma’s partner and longtime translator, wrote in an email that when she dropped him off for his flight to Hong Kong, she worried that she might not see him again. “I could tell he was thinking the same, although neither of us said anything,” she said.

Many people urged him not to make the trip, saying the festival was not especially important. “But he said it was precisely because it wasn’t that important that he felt it was important for him to go,” Ms. Drew said. “He was determined to carry on as usual, and not to let the censors win.”

In Hong Kong, Mr. Ma told reporters that while he did not think literature on its own could resist a political force, he saw the reinstatement of his invitation as a victory against self-censorship and a celebration of fiction’s healing powers. “Only in literature can we fully express the injustices of society, the extremes of human nature and our hopes for a beautiful future,” he said.

In an interview the next day, Mr. Ma pointed out an irony. When he lived in Hong Kong in the years before its return to Chinese sovereignty in 1997, local writers would tell him that mainland politics had no place in local prose, which they felt should be gentler and more tender. But that was years before the recent erosion of freedoms in the territory, whose “one country, two systems” arrangement was supposed to give it a high degree of autonomy until at least 2047.

Now, as with Tibetan culture, “the autonomy of Hong Kong literature and language is vanishing,” he said, speaking over espressos and jazz music in a dark-paneled hotel lounge. “It may take 10 to 20 years, but the process has started.”

Mr. Ma was born in the eastern coastal city of Qingdao in 1953, four years after the Chinese Communist revolution of 1949. He initially worked as a manual laborer and a performer in a propaganda theater troupe, and moved to Beijing in the late 1970s to become a painter and photojournalist. 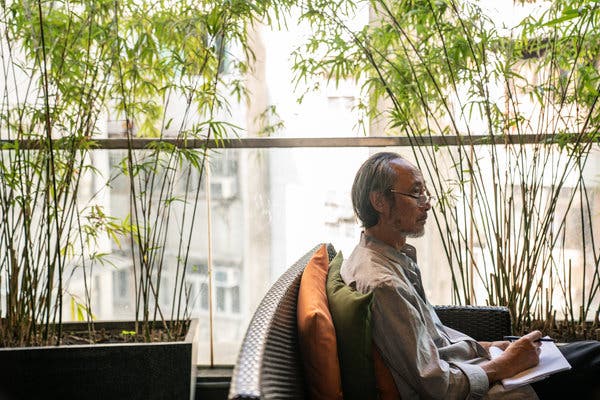 “The autonomy of Hong Kong literature and language is vanishing,” said the exiled Chinese novelist Ma Jian. “It may take 10 to 20 years, but the process has started.”CreditLam Yik Fei for The New York Times

His literary career began when he set off on a three-year journey across China, and later mined his experiences for “Stick Out Your Tongue,” a novella that documents a Chinese drifter’s journey through Tibet. Mr. Ma said the government placed a blanket ban on his work soon after that book was published, and later barred him from visiting the mainland.

“China Dream” may be the purest distillation yet of Mr. Ma’s talent for probing the country’s darkest corners and exposing what he regards as the Communist Party’s moral failings. The slender novel charts the mental breakdown of Ma Daode, a farcically corrupt provincial official who, when he is not busy arranging trysts with mistresses, is devising a “China Dream Device” that would help Mr. Xi’s increasingly authoritarian government erase civilians’ memories of the country’s postrevolutionary past.

But the project fails, mostly because the repression and censorship that Ma Daode carries out as a ham-handed functionary constantly triggers flashbacks to violence he suffered through — and participated in — as a young man during the Cultural Revolution.

“Why was I not buried along with my comrades, all those years ago?” Ma Daode asks himself at one point, after passing near the graves of victims of Mao-era violence. Even a visit to a brothel called the “Red Guard Nightclub” does not help him clear his mind. The prostitutes there are dressed in military uniforms, and his mind drifts from lust to a painful vision: the anguished face of his father, who committed suicide after suffering beatings at the hands of Mao-era officials.

But even if “China Dream” paints a withering portrait of China’s official class, Ma Daode’s pangs of conscience also suggest that even people who participate in a deeply corrupt and repressive system are capable of redemption. Mr. Ma said he had modeled the character on Winston Smith, Orwell’s protagonist in “1984,” who struggles to reclaim a sense of history even as an authoritarian government attempts to create a new reality.

“In every single dictator there is a speck of morality,” he said, leaning across the table and pressing his thumb and forefinger together for emphasis. “Even Stalin or Hitler or Mao Zedong: They were not always monsters throughout their whole lives.”

Yet, because Mr. Ma’s works have been banned in mainland China for his entire literary career, his message is not getting through to readers there — at least while Mr. Xi, who under constitutional changes passed this year can be president for life, remains in power. Ms. Drew said that his new novel is not even available in Hong Kong.