A factory worker in Wuhai City, Inner Mongolia, in 2005. Due to a lack of environmental safety standards they would get ill after one or two years on the job.CreditCreditPhotographs by Lu Guang/Contact Press Images

For five weeks, the world has had no idea where Lu Guang is.

Lu Guang is an internationally acclaimed photographer from China, and he has been my friend for more than 15 years. I’m proud that the agency I co-founded represents and distributes his work. We first met in Beijing in 2002. He was already a well-known and widely awarded documentary photographer in his country, and he would soon win a slew of international awards, including some of the world’s most prestigious. 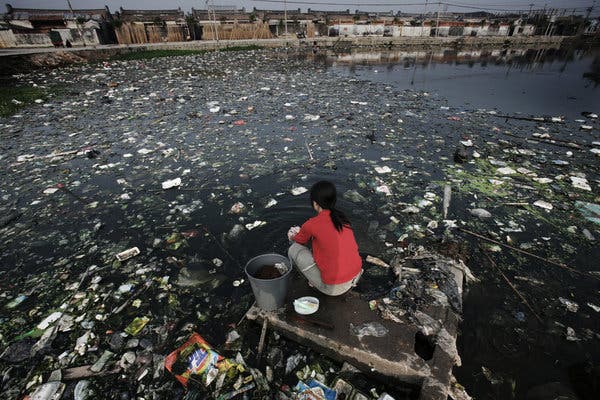 Rivers and ponds in Guiyu Town in Guangdong Province were severely polluted in 2005.

Five weeks ago, he was invited to travel to Urumqi, the regional capital of Xinjiang, in Western China. He went there to share his passion for photography by leading an informal, weeklong workshop with local photographers. The Chinese government has been conducting what it describes as a large-scale antiterrorism campaign in Xinjiang, targeting the Uighur ethnic group.

According to local sources, the security services detained Lu Guang, along with his local host, on or about Nov. 3. He was supposed to travel a day or two later to Sichuan Province, where he regularly does charity work. He never made it. 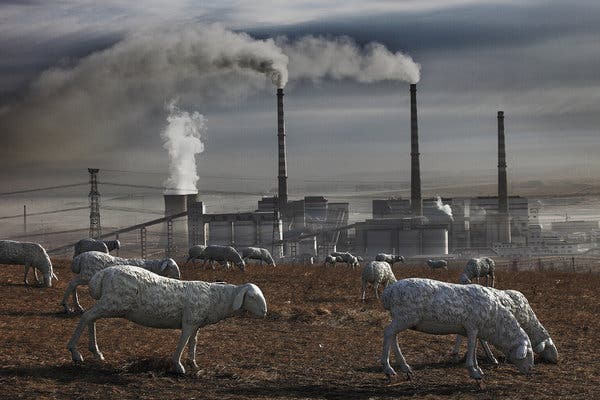 In order to maintain the image of Holin Gol City, its local government had more than 120 sculpted sheep, seen in this photograph from 2012, as well as cattle, horses and camels, placed in the Horqin Grassland. Pollution from the coal mines has degraded the meadows where sheep and cattle used to graze.

Lu Guang lives with his wife, Xu Xiaoli, and their son, Michael, in New York, where they are permanent United States residents. Xu Xiaoli has attempted multiple times to learn about her husband’s status and his health from the Chinese authorities, calling officials both in Xianjing and in Lu Guang’s hometown province, Zhejiang. The Chinese authorities have not responded to her.

Lu Guang is a deeply concerned citizen. He works almost solely in China, for both linguistic and cultural reasons. His photographs have depicted some of the harsher sides of life in China — AIDS, environmental destruction, pollution and poverty. 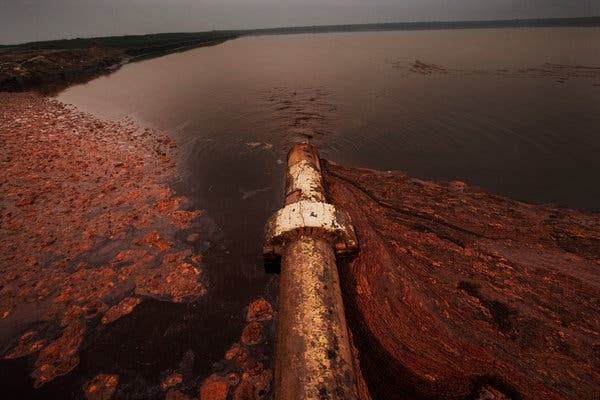 Wastewater flowing into the sea from a chemical factory in the Touzeng Coastal Chemical Industrial Park near Binhai City, Jiangsu Province in 2008. 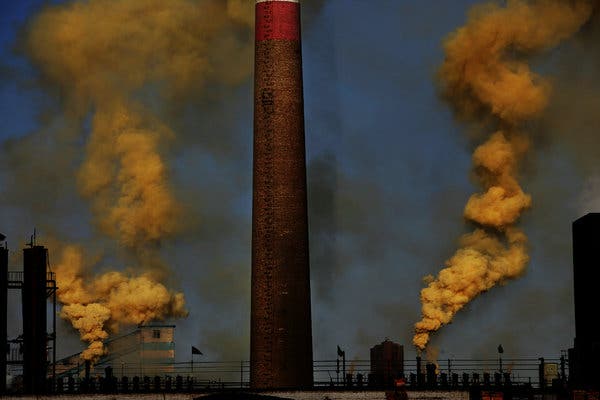 Lu Guang photographed pollution in Hainan, the industrial district of Wuhai City, in Inner Mongolia, in 2005.

The images shown here were taken by Lu Guang between 2005 and 2014 in northern and central China, including Henan, Shanxi, Ningxia and Inner Mongolia, as part of a long-term project on the impact of coal mining on the land, the environment and the people.

A family of five children in 2005. They had emigrated from the Ningxia Hui Autonomous Region to Inner Mongolia to find work in the Heilonggui industrial district. 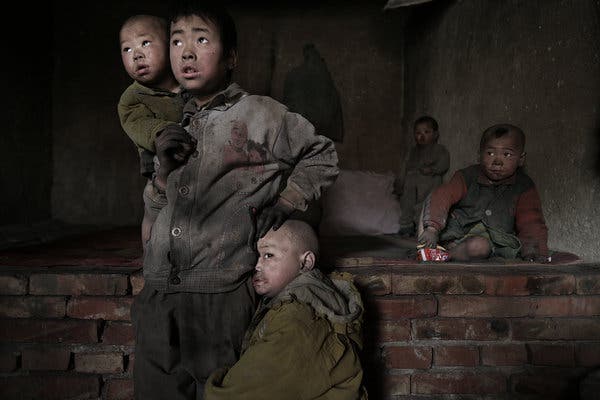 A family of five children in 2005. They had emigrated from the Ningxia Hui Autonomous Region to Inner Mongolia to find work in the Heilonggui industrial district. 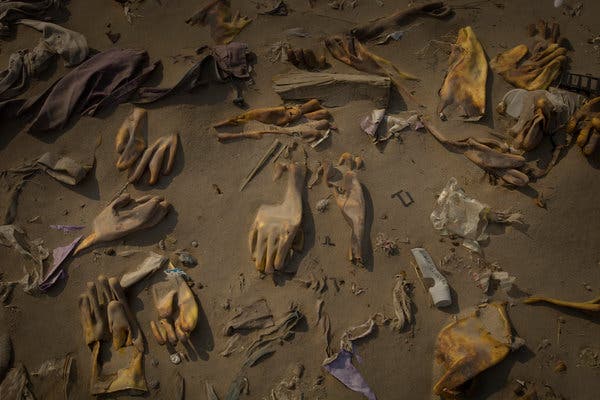 Industrial waste and garbage that was dumped on Inner Mongolia grassland in 2012. 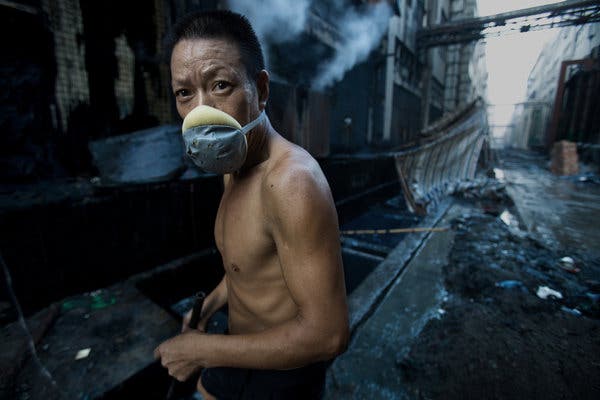 A worker in the denim processing village of Xintang Town in Guangdong in 2010, near the stone work area for grinding the fabric. 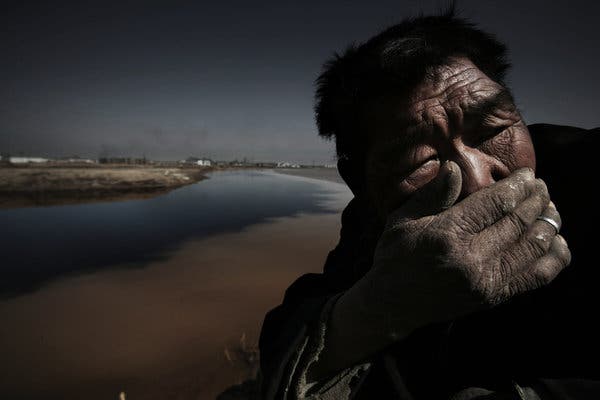 A sheepherder along the bank of the Yellow River. Shizuishan City, Ningxia, in 2006. 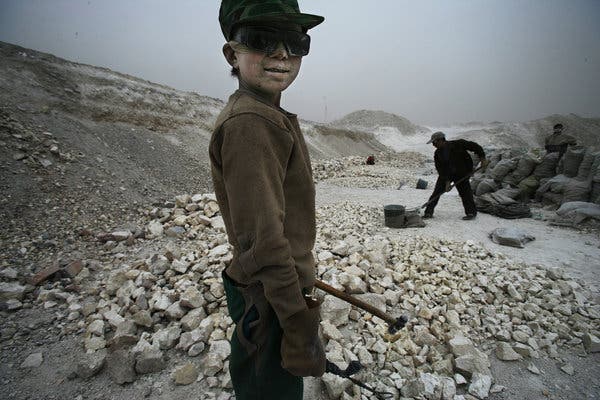 Yang Xinrun, 15, photographed in 2005, came to work in the Heilonggui Industrial District with his parents after he finished second grade. He earned about 16 yuan a day.

In some ways, these are typical of Lu Guang’s images. They mirror similar circumstances elsewhere in the world, and so they carry a broader universal significance. He believes, in the tradition of the great American photo essayist, Eugene Smith, that photography “is a small voice” that can help change the world. We hope that he will soon be returned to us, safely. 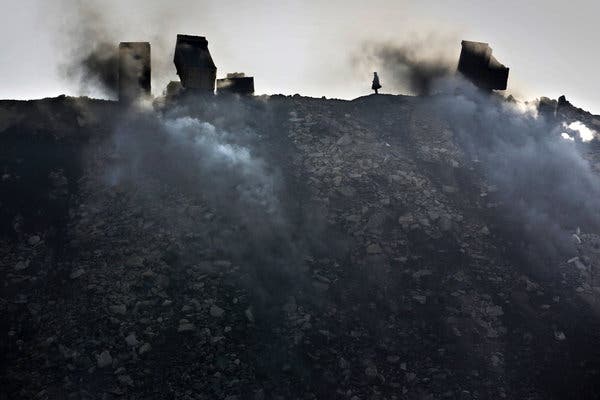 Lu Guang is a documentary photographer who was awarded the W. Eugene Smith Grant in Humanistic Photography to pursue his work on pollution in China in 2009. Robert Y. Pledge is the co-founder and president of Contact Press Images.