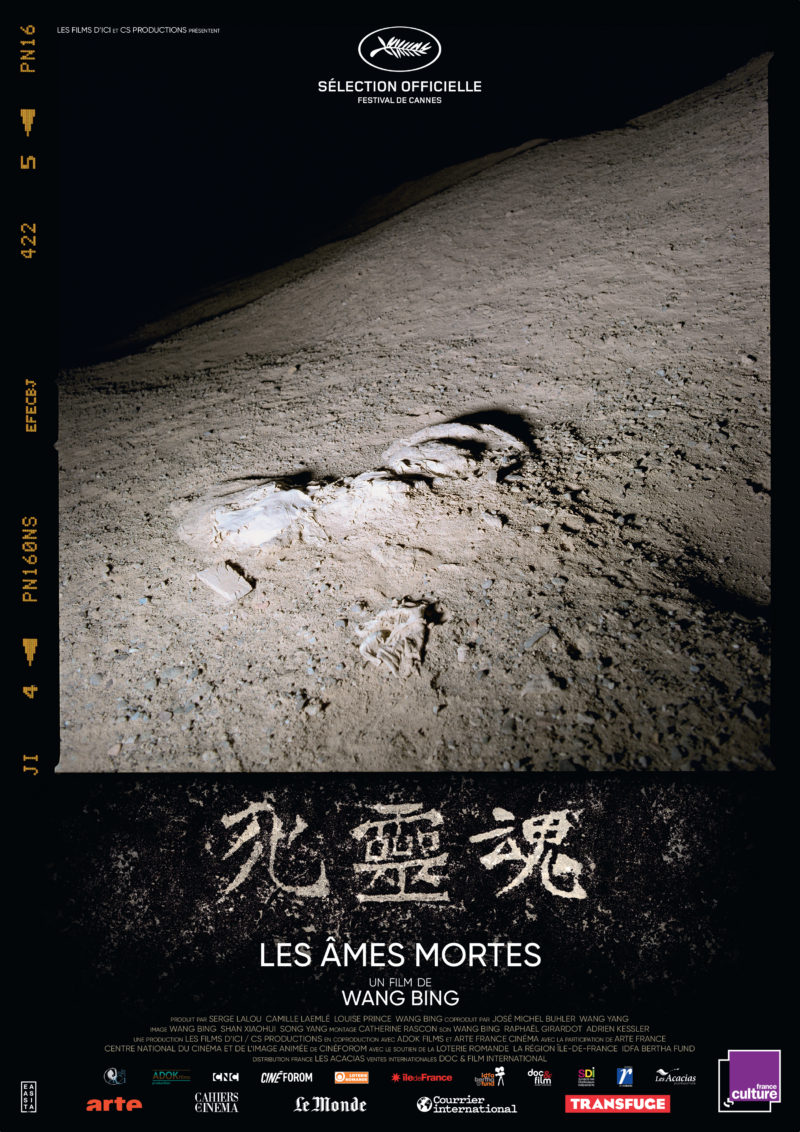 A few weeks ago, Wang Bing’s newest 9-hour documentary Dead Souls got a small-scale arthouse release in Paris. In conjunction with the release, EHESS organized public screenings of some of his earlier films and invited Wang Bing to give a masterclass on October 31.

Dead Souls is a project Wang Bing has been working on for over a decade. When Yang Xianhui’s book Chronicles of Jiabiangou (a collection of lightly fictionalized oral history accounts of former victims of the Anti-Rightist movement in Gansu who survived the deadly famine in the Jiabiangou Reeducation Through Labor Camp in 1960), which I wrote about in China Quarterly, was first published in 2003, Wang Bing contacted Yang. Wang Bing is from rural Shaanxi, which borders Gansu and, as he has mentioned in interviews, two of his uncles on his father’s side were persecuted as rightists, which may have sparked his interest in the book. After buying the film rights to Yang’s book, Wang Bing proceeded to start seeking out the people Yang had talked to, conducting his own interviews with them. One of these interviews with He Fengming, who had written a book explaining how her husband Wang Jingchao died of famine in Jiabiangou, became a stand-alone film, Fengming (2007). These interviews were preparations for a fiction film project, which was finally completed in 2010 under the title The Ditch. Shot in harrowing conditions more or less on location, it uses what I argued was a form of highly theatrical acting to create a sense of distance between the viewer and the story. Since that time, Wang Bing has mentioned that he had plans to use the footage of the 120 preparatory interviews to make a kind of compendium documentary on the Anti-Rightist movement. This is the project that has now partially come to fruition (Dead Souls is supposed to be the first part of a several-part project). Wang Bing struggled for many years with this material to the point of mental anguish and only managed to overcome the difficulties after going back to Lanzhou in 2014 and re-interviewing those of the survivors who were still alive. He has stated that observing the speed at which their ranks were thinning gave him a sense of urgency that helped him finish the film.

Before discussing the film itself, I want to mention another unique work (it also happens to be showing today, November 25, at the Tate Modern): Traces (遺址, 2014). As Wang Bing has explained, this 29-minute documentary was shot during his first visit to the site of Jiabiangou, using old 35 mm film that he had collected for some years. During most of the film the camera points straight down to the sandy desert ground, occasionally showing the director’s boots. In the first section “Mingshui,” wherever the camera turns, it finds human bones, loosely scattered among the sand, and even several skulls, as well as some more recent remains of bottles, gourds and clothes left by vagrants. In the second section “Jiabiangou,” the camera enters some of the caves where the inmates lived in 1959-1960. Just like in The Ditch, the contrast is striking between the bright light of the desert and the pitch black inside the caves. This contrast draws the camera’s attention to two characters carved into the stone wall: 自由 or freedom.

The film has a strong self-reflexive dimension. Some of the old 35 mm film is corrupt, so that geometrical shapes appear on the image. The human body behind the hand-held camera manifests itself in the jerky movements. In addition to the wind and the heavy breathing of the director, the sound is saturated by the noise of the camera motor, drawing attention to the equipment itself. Wang Bing reportedly returned to the venue on the second day to record the sound separately from the image. All of these intrusions remind the viewer that the history being excavated is mediated through the director’s gaze.

Dead Souls is divided into three parts (it was shown in Cannes in two parts). Of course, the main challenge in organizing the massive amount of footage (600 hours) was how to structure the film. The excellent press kit contains an interview in which Wang Bing explains that, rather than a chronological organization, he chose to give each surviving witness a block of roughly 30 minutes. Of course, this time represents only a fraction of the full interview, and Wang Bing uses exaggeratedly rough jump cuts to draw the viewers’ attention to what he is leaving out, almost like ellipsis marks in a quotation. All together, there are a dozen of these long testimonials in the film. Just like in Yang Xianhui’s book, almost all of the interviewees underscore that they had no political divergence with the communist party, they were not “rightists,” but were usually targeted for extremely minor and mundane offenses. While there is some repetition in content between them, the overall effect is particularly powerful because the viewer can enter the world of each of the interviewees and gain some understanding not only of the facts that they are trying hard to remember, but also of their personalities and how the trauma of a close brush with death in their 20s or 30s has left traces in their psychology.

While I can’t provide a full discussion of the film here, I’d like to mention two episodes that stand out very strongly. In the first part, a long sequence is devoted to the funeral of one of the survivors whom Wang Bing has briefly interviewed on his sickbed, Zhou Zhinan. A traditional burial with instruments and ritual lamentations, in the remote hilly countryside of Shaanxi (whereas the government aggressively promotes cremation as the only “modern” type of burial) in December 2005, it shows the abiding sadness and resentment of Zhou’s son who tries to lay his father to rest while honoring the memory of his persecution.

Another outstanding episode appears in the third part of the film, with the only interview of a camp guard, Zhu Zhaonan. Wang Bing notes that guards were often older and many have already died, while others are not willing to speak out. It is also the only interview in which the director is visible. Zhu was a cook in Jiabinagou, who was sent ahead to set up the annex at Mingshui, where the greatest number of inmates ended up dying. Listening to Zhu’s narrative, suddenly all the parts of the camp’s geography and organization fall into place, as we realize how fragmented the vision of each survivor is, and how little they understood about the camp as a whole. Zhu provides fascinating details, such as the fact that in the main camp they provided halal food for Muslim rightists. He quantifies the deeply felt inequalities in treatment between cadres and inmates: cadres were given about 450g of grain per day, while the inmates’ ration was 250g. Mingshui was organized around three ditches in which the inmates lived. As everything broke down in Mingshui during the massive famine, deaths were still generally logged in the record books but the dead could no longer be buried because the ground was frozen at least one meter deep. Death was everywhere and became completely normal. The authorities wanted the rightists dead: “要他們的命.” Sympathizing with the rightists was out of the question because of “class consciousness,” even though many of the guards knew that they had been falsely accused or deported on trumped-up charges. Zhu prides himself on having at least tried not to mishandle anyone. The interview ends with the only known surviving photo of Jiabiangou, which Zhu gave to Wang Bing when they met again. It shows him riding a bicycle smiling amid a bunch of bedraggled inmates, and is a truly chilling testimonial to what in effect became a death camp, reminiscent of controversies surrounding photos of Nazi concentration camps. This is underscored in the ending of the film, which concludes with the footage of the camera nosing among the bones scattered in the sand.

Wang Bing’s film covers some of the same ground as Ai Xiaoming’s 5-hour Jiabiangou Elegy (夾邊溝祭事, 2016) but the structuring principle is opposite. While Ai cuts the interviews into short slices and reorganizes them by theme, Wang Bing structures his film around the individuals, not the information. Hence, Ai’s film is richer in historical facts, she covers a broader range of different administrative categories. But Wang Bing’s film provides the viewer with unique insights into the mental world of each individual, whether they are communists, dissidents or Christians, whether they are urban intellectuals or rural laborers. This is part of Wang Bing’s broad investigation of how human beings maintain a form of agency in the most harrowing circumstances. It is also part of the many current efforts in China by historians like Yang Kuisong (e.g. Chronicles of Marginals) to rewrite the history of the Mao era based on the lives of ordinary people, and on understanding the mental frames of individuals rather than only looking at collectives.