Source: The Guardian (10/4/18)
‘This is part of the plan’: new train blurs line between China and Hong Kong
The $11bn high-speed Vibrant Express connects Hong Kong with mainland China in 20 minutes for the first time – and the city’s residents are nervous
By Lily Kuo 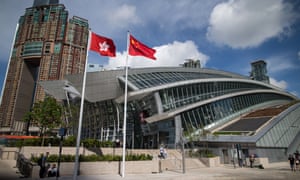 ‘They want us to go to China and work’ … The Hong Kong and China flags outside the newly built West Kowloon station in Hong Kong. Photograph: Jerome Favre/EPA

A restaurant on one floor is technically on Hong Kong soil. Just below it, a duty-free shopping area belongs to neither government. Meanwhile, the VIP lounge one level down from that is Chinese territory.

This month, after more than eight years of construction, delays and debate, Hong Kong finally opened the Vibrant Express, an $11bn rail link connecting the city to mainland China in less than 25 minutes. Under an agreement called the “co-location arrangement”, a large part of the new West Kowloon station – around 105,000 sq m of it – have been leased to Beijing for what is a de facto Chinese border in the middle of Hong Kong.

Passengers getting off the train are greeted by Chinese police officers standing on elevated platforms. Surveillance cameras hang from the ceiling. A Chinese police station has been set up in the Chinese port area. 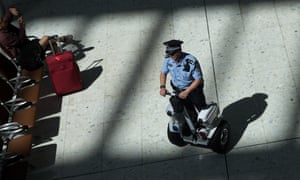 A mainland Chinese police officer patrols inside the departure hall of West Kowloon station in Hong Kong. A Chinese police station has been set up in the station. Photograph: Jerome Favre/EPA

The blurring of the line between Hong Kong and mainland China has alarmed residents and critics already uncomfortable with the city’s increasingly close ties with Beijing. Hong Kong, a special administrative region of China, operates under its own legal and judicial system. To many, the sleek new rail link and station are symbols of Beijing’s creeping hold over the city and its slow but seemingly inevitable assimilation into China.

“It looks nice, but we don’t really support the reason behind it,” says Marco Ma, 36, who has come to see the new train station with his wife, Sherry Ng. The couple look up at the sloping ceilings and walls of lattice-like windows of the terminus designed by US architect Andrew Bromberg at Aedas. At night the station, lit from the inside, is said to look like a lantern.

“The government is gradually transforming Hong Kong into China,” says Ng, 26. “This is part of the plan.”

The Vibrant Express comes at a time of uncertainty for the former British colony, which was returned to Beijing in 1997 under the proviso that it would enjoy a “high degree of autonomy” for 50 years – known as the “one country, two systems” policy.

Over the last decade that autonomy has weakened, especially in the aftermath of mass pro-democracy protests in 2014. Activists and opposition leaders have been barred from office, while independent booksellers have been detained by Chinese agents. Legislation criminalising any disrespect of the Chinese national anthem and a draconian national security law loom. 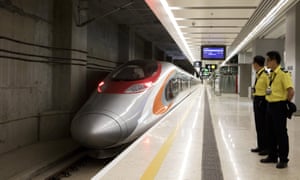 A Vibrant Express train at West Kowloon station. To many, the sleek new rail link and station are symbols of Beijing’s creeping hold over Hong Kong and its slow but seemingly inevitable assimilation into China. Photograph: Giulia Marchi/Pool/EPA

In the past, major infrastructure projects in the city were also initiated at times of uncertainty. In the 1950s, the colonial government proposed a cross-border tunnel connecting the British-dominated Hong Kong island and Kowloon, predominately Chinese, to promote unity and show its commitment after the second world war.

Hong Kong’s international airport, designed by the British architect Norman Foster and constructed in the lead-up to 1997, was similarly planned to help assuage a public nervous about the handover.

Yet the high-speed rail has done little to rally the public. “The difference is that rather than instilling confidence in the population, these projects seem to be aggravating the ever-present anxiety in the city,” said Cole Roskam, an associate professor of architectural history at the University of Hong Kong.

Next month, Hong Kong is slated to open another major link to China, a 34-mile highway between Hong Kong, Macau, and Zhuhai that will be the world’s longest sea bridge.

The bridge and the high-speed rail connecting Hong Kong to cities such as Guangzhou and Shenzhen are part of a broader project to turn Hong Kong and nine mainland cities into a super-connected high-tech region called the Greater Bay Area, to rival Silicon Valley. Some worry both projects place Hong Kong one step closer to being subsumed into southern China.

“[The projects] are seen as so audacious that people are reading specific political meanings: that they are literally trying to tie, link and tether Hong Kong to the mainland,” Roskam said.

A city regaining its memories

Urban historians say Hong Kong, like many cities, contains several identities. One of the most commonly cited used to be transience. A collection of fishing villages turned military outpost that became a major trading port and eventually a global financial centre, Hong Kong has often been made up of mostly of migrants and expatriates.

Now, newer generations of Hong Kongers, born and raised here, see the city as their permanent home. A poll by the University of Hong Kong in June found respondents identified most strongly as “Hong Kongers” and considered themselves as “global citizens” ahead of “citizens of the People’s Republic of China,” which was ranked last of six categories of identity measured. 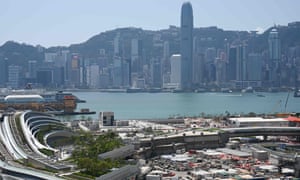 These are often the people behind preservation campaigns to protect everything from old banyan trees to tong lau – low-rise tenement buildings rebuilt in the 1950s and 1960s – to, most recently, the headquarters of an iconic bakery brand, Garden Company.

“Hong Kong used to be a cultural desert,” said Franklin Yu, chairman of the board of local affairs at the Hong Kong Institute of Architects. “People say Hong Kong is a city without memories. We are beginning to cherish our memories.”

At the same time, an influx of mainland Chinese into Hong Kong has begun to change the city. Local shops have given way to pharmacies, jewellery chains or department stores catering to mainland shoppers. More and more, one hears Mandarin on the street instead of Cantonese.

“The city is changing every day and these big projects are moving toward China,” said Silver Luo, 28, a property manager in Hong Kong who believes the local government favours initiatives that bring the city more closely in line with China.

The rail also represents the government’s efforts to shape Hong Kong culture. The West Kowloon terminus is part of a multibillion-dollar arts and performing hub on the harbour.

The West Kowloon cultural district will be the largest cultural space project since the handover. The district will host Hong Kong’s version of the Palace Museum at Beijing’s Forbidden City, with relics and artwork borrowed from China. Notably, the Xiqu Centre for Chinese opera uses the Mandarin rather than Cantonese term for the art form.

“Culture is a very soft weapon that can have an influence on citizens,” says Tanya Chan, a lawmaker with the pro-democracy Civic party who is on a subcommittee monitoring the cultural district project. “It’s building a reliance on the Chinese government. It’s a very clever, soft way to integration.” 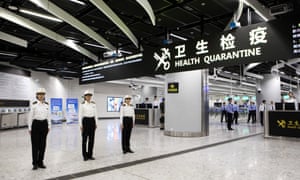 Officers stand in the Mainland Port Area at West Kowloon station. In the first three days of the Vibrant Express’s operation, a total of 160,000 passengers took the train – far below the expected amount of 80,000 a day. Photograph: Giulia Marchi/Pool/EPA

‘They want us to go to China and work’

“The government is encouraging young Hong Kongers to go to China and work,” said Luo, the property developer. “They want us to see how China is developing. They want us to go back.”

That campaign has not caught on yet, and it is not clear the train will help. In the first three days of operation, a total 160,000 passengers took the train, according to the Hong Kong Mass Transit Railway, far below the expected amount of 80,000 passengers a day.

Few passengers taking the Vibrant Express to Hong Kong, however, are aware of any criticism of the rail link.

In first class, a woman reclines her capsule-like seat all the way down and takes a nap. In another cabin, a couple and their young child on their way home from a holiday say their only complaint was some confusion over their tickets. A businessman on his way back to Hong Kong dismisses his compatriots who criticise the newly opened train line as luddites resistant to change.

Lai Youyou, on her way to Hong Kong from Shenzhen with her friend to go shopping, shrugs when asked if she worries the distinction between Hong Kong and mainland China is disappearing. “It’s all the same,” she says. “We can go there. They can come here.”