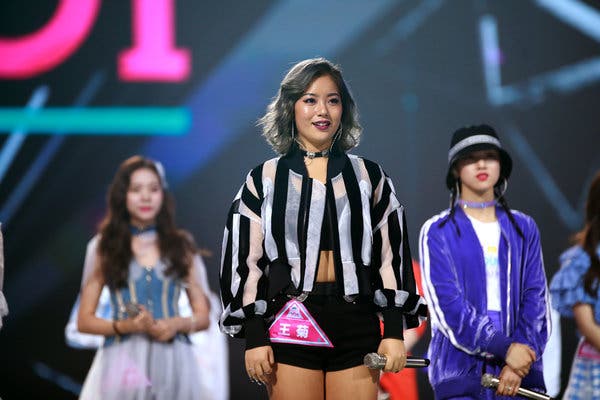 BEIJING — For a moment, it looked as if China’s rigid beauty standards were on the brink of being upended — or at least expanded slightly.

“Produce 101,” a popular online talent show, puts women through their paces for one of 11 spots in a female pop band; at first, Wang Ju, a 25-year-old model manager who’d almost lost her place on the show earlier in the season, seemed an unlikely candidate for success. But over the course of a few weeks in June, Ms. Wang rode a mounting wave of public affection to find herself, as of midmonth, ranked second among the show’s 22 finalists. Suddenly, Chinese commentators were at pains to explain just how Ms. Wang — a woman Chinese media variously referred to as “stout,” “dark” and “not pretty enough” — got there.

Ms. Wang had long been seen as different from the rest of the women on “Produce 101,” who, with their fair skin, slender bodies and sweet smiles, embodied an aesthetic known as “bai shou mei,” or “white, thin, beautiful” — the gold standard of beauty pursued by young women across China today.

Anyone outside China might be surprised to learn that Ms. Wang has been viewed as a mold breaker: She is, in fact, rather pretty, and her body hardly seems outside the range of average. But in a sea of bai shou meis, Ms. Wang’s differences — her slightly darker skin, her slightly larger body, and her unwillingness to apologize for them — made her stand out. Ms. Wang embraced her so-called flaws: In one video, she was shown jokingly grabbing her stomach in front of a more slender friend, who later offered her a slice of pizza. And she displayed a self-confidence that drew comparisons to American pop stars like Beyoncé: A rap she performed included the English lyrics “You don’t have to put a ring on me, I can buy my own (bling bling).”

When Ms. Wang was unexpectedly catapulted into second place, many in China hailed her overnight popularity as a chance to rethink ideas about Chinese womanhood and femininity. A victory was not to be: Ms. Wang fell to 15th in the June 23 finale, falling short of the final 11, who will go on to become a new band called Rocket Girls. Still, her dramatic rise and fall have unleashed fervent discussions on a range of topics including body image, social mobility and female empowerment.

The fact that bodies are changing in a rapidly developing China has been well documented. The country’s sweeping urbanization and the adoption of richer diets mean that Chinese adults, over all, weigh more than they used to and that obesity is a growing problem. But while real Chinese bodies have gotten heavier, the ideal body type — for women at least — has shifted in the other direction.

In the 1980s and 1990s, healthier body images prevailed, exemplified by women like the actress Gong Li and the singer Deng Lijun. These reflected ideas left over from the Cultural Revolution, when the ideal woman was portrayed as ruddy and strong, said Tan Jia, a professor at the University of Hong Kong who specializes in gender and media studies.

In recent decades, however, notions of beauty in Asia have converged around the tall, thin and fair image exported by Korean and Japanese pop culture. Whitening products, popular across East Asia, and the widespread use of “beautification” apps like Meitu, where you can enlarge eyes, slenderize legs and sharpen chins with a few taps, have contributed to narrowing representations of beauty on social media.

The increasingly slender, so to speak, range of acceptable bodies comes at a time when Chinese society is putting an increasing premium on women’s looks. The country’s transition to capitalism has been accompanied by setbacks in the area of gender equality. Discrimination against women is rife and often overt in the workplace, and women can be hired as much for their youth and beauty as their skills. Job advertisements often state a preference for men over women, and employers seeking female workers sometimes include height and age requirements.

It’s not surprising, therefore, that many found something to celebrate in Wang Ju’s unlikely rise to fame. Ms. Wang was especially popular among those who viewed themselves as outsiders. She found a particular base of support, for instance, in China’s L.G.B.T. community. Her personal story, too, resonated with many young people: Unlike most of the other contestants, who had formal training and were backed by talent management companies, Ms. Wang was an independent contestant who had given up her dream of being a performer at 17, in accordance with her family’s wishes for her to train as a teacher, only to return to it at 25, making her one of the oldest contestants on the show.

For now, however, it seems that mainstream Chinese beauty has won out. Yang Chaoyue, a doe-eyed contestant who gained the third-highest number of votes in the finale, was also viewed as an underdog, in part because of her rural background. But many commentators claimed she won votes in part because she was often seen crying on the show and portrayed herself as sensitive and self-doubting — a foil to the confident, assertive Ms. Wang, but one in keeping with traditional ideas about Chinese femininity.

Still, there are already rumors that Ms. Wang has signed a solo recording contract and that cosmetics companies are interested in signing her as a spokeswoman. For many of Ms. Wang’s fans, the performer is exactly where she belongs: on an independent path that was never “Produce 101.”

Yuan Ren is a writer and producer from Beijing.