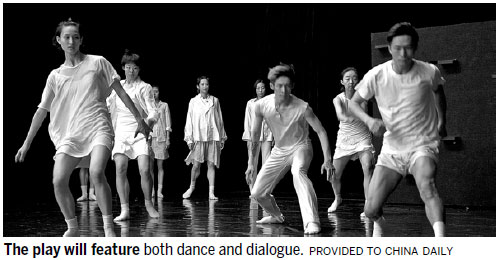 The dance production A Leaf in the Storm will be presented by the Beijing Dance Theater at Beijing’s Tianqiao Performing Arts Center from June 6 to 10.

Based on a war novel of the same title by Lin Yutang, the production marks the first time the story is retold in dance. The novel, which was published by New York publishing firm John Day Book Company in 1941, is about the lives of several characters in Beijing during the Japanese invasion.

“There is romance, hope, belief, madness and death. Dancers will move according to their interpretations of these elements,” says Wang Yuanyuan, a dancer-choreographer with the Beijing Dance Theater.

As the dance requires physical movement and dialogue, dancers have to challenge themselves by performing not only as dancers but also as drama actors, says Wang.

“The line between different art forms is blurred nowadays so we want to do a different dance production to mark the 10th anniversary of the company,” says Wang.

She adds that the idea to combine dance with dialogue stems from her relationship with the Beijing Repertory Theater which she co-founded in June 2017 with lighting director Han Jiang and set designer Tan Shaoyuan. Han and Tan are also members of the creative team for A Leaf in the Storm.

Born and raised in Beijing, Wang became a professional dancer at age 10 after joining the middle school of Beijing Dance Academy where she learned ballet.

In 1995, she graduated from the academy after majoring in choreography. Three years later, she was named resident choreographer of the National Ballet of China.

From 2000 to 2002, Wang continued her training at the California Institute of the Arts’ School of Dance in Los Angeles.

Such is her renown that some of China’s top filmmakers have engaged her for choreography advice. She has choreographed a ballet scene for Zhang Yimou’s 1991 film, Raise the Red Lantern, the dance sequences for Feng Xiaogang’s 2006 film The Banquet, as well as performances held during major events such as the return of Hong Kong in 1997 and the opening ceremony of the Beijing Olympics in 2008.

In 2011, Wang debuted her original production Haze at the Kennedy Center in Washington. Created in 2009, the production touches on a variety of issues, ranging from environmental issues like pollution to emotional confusion.

Wang made her directorial debut with her rendition of the play The Lady from the Sea which was written in 1888 by Norwegian playwright Henrik Ibsen. Wang’s production premiered in Shanghai last September.