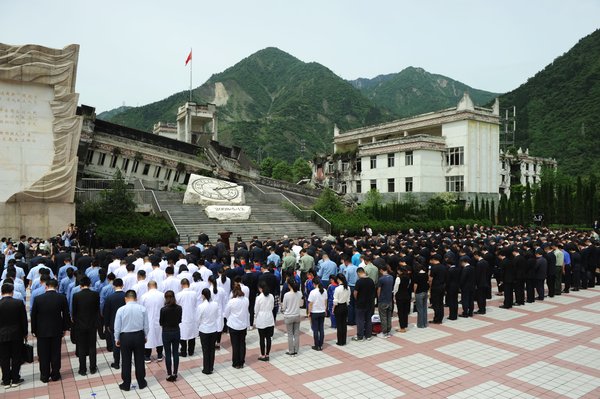 Attendees on Saturday marked a minute of silence in front of the former Xuankou Middle School, destroyed in the 2008 earthquake.CreditAgence France-Presse — Getty Images

BEIJING — On the 10th anniversary of China’s deadliest earthquake in decades, the police on Saturday detained an outspoken pastor and blocked a planned service to mourn the 70,000 or more people killed when whole towns and villagers were crushed.

The anniversary of the earthquake, which rippled across Sichuan Province in southwest China on May 12, 2008, has been a time of renewed mourning for survivors, while the ruling Communist Party has used the date to praise China’s reconstruction of devastated areas.

But officials in Sichuan have sought to stifle any unapproved commemorations that could rekindle angry questions about why many new buildings, including schools, collapsed in the 7.9-magnitude quake.

On Friday night, the police detained Wang Yi, a Protestant pastor whose independent church planned to hold a memorial service on Saturday morning in Chengdu, the provincial capital of Sichuan, his wife, Jiang Rong, said.

The police also took away dozens of people who arrived for the planned service on Saturday morning, and they used trucks to remove publications belonging to the church, indicating that a broader move was underway against the congregation, known as the Early Rain Covenant Church.

Another church leader, Li Yingqiang, was formally held for questioning and released on Saturday night, Ms. Jiang and other supporters of the church said.

“Today more than 200 brothers and sisters were taken away by the police, and three still have not been released,” Mr. Wang said in a phone messageto members of his church. He indicated that the conflict with the authorities may continue, adding: “The religious case of the Early Rain Covenant has begun.”

The police in Chengdu did not answer calls, or said they did not know about the case.

Mr. Wang has bluntly criticized Chinese state controls on religion and has had multiple run-ins with officials before. But this time looked more serious for him and his church, Ms. Jiang said by telephone.

An official from the religious affairs bureau told him that “the church assembly was unlawful and banned,” Ms. Jiang said, “and then the police read out another notice that accused Wang Yi of provoking trouble.”

Ms. Jiang shared a video that showed Mr. Wang repeatedly asking police officers at his door what exactly he was accused of. An officer said it was about his online activity, but did not specify what had he had done to violate China’s sweeping crime of “picking quarrels and provoking trouble,” which is often used to silence dissent.

“This is our shared pain, shared trauma, and is also our shared memory,” Mr. Wang had written in an announcement about the memorial service published on Thursday on the church’s Facebook page. “Although man-made calamity has overshadowed natural disaster, grace is greater than evil. May the Lord Jesus Christ grant healing on our souls, and grant true hope on this land.”

Mr. Wang, 44, has argued that churches should not be answerable to the state. His church is one of a number in China that have resisted government oversight, opting for a tenuous independence, often moving premises and risking closure.

This year, Mr. Wang was among the few prominent Chinese voices to condemn the elimination of presidential term limits.

Despite Mr. Wang’s release, the size of the police operation highlighted how raw memories of the 2008 earthquake remain in Sichuan.

Foreign reporters covering the anniversary have described being warned away by nervous officials. Grieving parents who have kept demanding that the government give a fuller accounting of why their children’s schools collapsed in the quake have endured surveillance, warnings and detentions.

The government estimated that around 69,000 people died in the quake, whose epicenter was in Wenchuan County, mostly from collapsed buildings and landslides. Another 18,000 went missing and were most likely killed. It was China’s worst earthquake since 1976, when nearly 250,000 people were killed around Tangshan in the country’s north.

Soon after the 2008 earthquake struck, charities, religious groups and spontaneously organized groups of students and citizens rushed to offer food, shelter and medical care. Soldiers who tramped into remote valleys and dug tirelessly to search for survivors were hailed as heroes in a nationwide surge of unity.

But soon after, the government imposed tighter controls on the area. Officials were disconcerted after grieving parents, journalists and activists, like the artist Ai Weiwei, said that shoddy building standards and corruption seemed to have contributed to the destruction, especially of schools.

Ever since 2008, Chinese commemorations of the disaster have been shadowed by tensions between the official ceremonies — dwelling on the heroism of the soldier-rescuers and the speed of reconstruction — and unofficial efforts to mourn the dead and renew calls for an official reckoning with why so many died in building collapses, especially students in schools.

“Under the staunch leadership of the Chinese Communist Party, the reconstruction work in the Wenchuan earthquake disaster area has achieved successes recognized by the world,” China’s president and Communist Party leader, Xi Jinping, said in a message on Saturday.

Mr. Wang was a law academic who converted to Christianity after he began representing unregistered churches resisting official pressure. After the 2008 earthquake, his budding church in Chengdu supported Christian groups and others bringing in help for survivors. In recent years, the church has attracted hundreds of regular worshipers, despite difficulties finding a permanent home. It has also opened a school.

Before Mr. Wang was taken away by the police, he told church members that they should appeal for their legal rights in the face of police pressure.

“We will also face this following faith and conscience,” he said in the message to church members on Thursday. “We will not obey any unjust and unlawful demands, and are willing to pay the price.”