Source: NYT (5/5/18)
On This Chinese TV Show, Participants Have Nothing to Lose but Their Chains
查看简体中文版 | 查看繁體中文版
By Chris Buckley 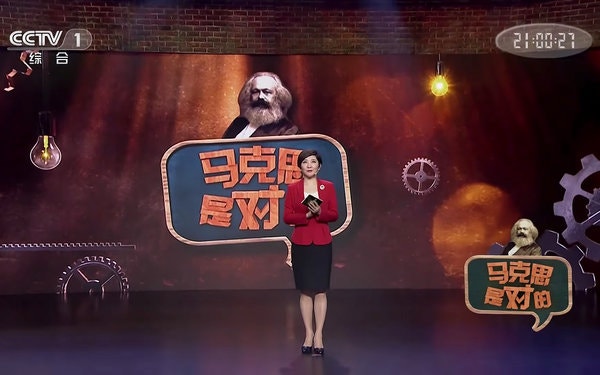 “Marx Got It Right,” a new TV show, is among the Communist Party’s attempts to reach a younger audience.CreditChina Central Television

BEIJING — Regal orchestral music strikes up, a computer-animated train races by and an old man with a bushy white beard looms onto the television screen. Then the studio audience applauds as an effervescent host opens an episode of China’s latest prime-time entertainment.

It looks like another Chinese talk show, but the bearded man is Karl Marx. This is “Marx Got It Right,” a slickly produced program that is part talk show, part indoctrination session — and a vivid illustration of the quirky efforts that the Communist Party under Xi Jinping is making to win over China’s millennials.

Saturday was the 200th anniversary of Marx’s birth, and Mr. Xi, trying to reassert the Communist Party’s dominance over an increasingly complex society, has used the occasion to call for renewed devotion to the founding tenets of Communism. He gave a big speech on Friday, days after visiting Peking University, where he also stressed Marxist education.

“No idea or theory in the history of human thought has produced a broader or deeper impact than Marxism,” Mr. Xi said to thousands of officials in the Great Hall of the People. He called Marx “the greatest thinker in modern times.”

“Marx Got It Right” is among the party’s attempts to impart that lesson to younger people who grew up absorbed in their smartphones rather than “The Communist Manifesto” or Mao Zedong’s “Little Red Book.”

“For some, Marx is just an image of someone who always has a big beard, and Marxism is just a bunch of concepts or a few exam questions,” Wu Xuelan, the show’s host, told the audience of clean-cut students. “Today, I want to ask everyone: Do you really understand Marx and Marxism?”

The show, produced with help from propaganda officials, is part of the party’s strategy to persuade twenty-somethings that the Marxist-Leninist lessons they studied, or dozed through, in school still hold true. China, the show insists, remains loyal to socialism, despite having as many as 800 or more billionaires, rising high-tech conglomerates and gaping inequalities.

Still, even the studio audience of polite party loyalists seemed daunted by Episode 3, “The Immortal ‘Das Kapital,’” about Marx’s forbidding three-volume treatise on the workings of capitalism.

“I’m very happy that so many young friends from everywhere across the country are here with us to relive in stories the arduous times when Marx composed ‘Das Kapital,’” said Ms. Wu. “In modern human history, Marxism will come to the fore during every great crisis or turning point, and a classic indicator of this is Marx’s ‘Das Kapital.’”

When Ms. Wu asked who had read the book, one or two hands poked up. But Ms. Wu had an answer for any students who took capitalists like Jack Ma or Steve Jobs as their heroes and needed convincing to dive in.

“Media reports have said that if Marx was still alive today, he would be a wealthy man from the royalties” from sales of “Das Kapital,” she said.

Laughter and banter are rare in each earnest, 33-minute episode. But the show uses cartoons and folksy examples to argue that Marx discovered fundamental truths about how societies evolve, and that China remains shaped by Marx’s egalitarian ideals.

Left unsaid in the program: Measures of wealth inequality in China have neared levels found in the United States, even as Mr. Xi courts global capitalists at Davos.

While Mr. Xi has tried to woo foreign investors, he has also tried carve a distinctive ideology — part old-school Communist values, part earthy appeals to ancient Chinese tradition — that inoculates China from the tumult of free markets and liberal democracy. The Chinese Communist Party these days rarely mentions class struggle, and has embraced markets since Deng Xiaoping’s era in the 1980s.

Even so, leaders insist that China stays above the ruthless rules of capitalism. Above all, they emphasize that Marxism means keeping their one-party rule.

“I don’t think that the talk about Marxism came all of a sudden, but the 200th anniversary of his birth is a very important time frame and there are many commemorative activities,” Wang Xinsheng, a professor of Marxism at Nankai University in northern China, said. “China’s market economy is one that uses market economics as a tool to realize the values and goals of socialism.”

“Marx Got It Right” makes that point by showing the global financial crisis of 2008, the bitter divisions of American politics and the tumult of Brexit, while saying that China has remained stable and growing thanks to one-party socialism held together by the ideals of Marx.

“I feel that China now is very safe, full of vitality and very prosperous,” one student said, followed by other students praising China’s growth, innovation and stability.

By contrast, the show blames the collapse of the Soviet bloc on reformist politicians like Mikhail S. Gorbachev who abandoned Marxist-Leninist orthodoxies.

“Marx Got It Right” belongs to a spate of Chinese propaganda spectacles aimed at youth, although the results can feel forced. Last year, officials in southern China produced a series called “Socialism Is a Bit Hip,” which tried to mimic the zany garishness of pop culture. Party-backed rap groups have also made patriotic songs with lyrics so profane they should require parental guidance warnings.

Outside the tightly scripted television studio, Chinese people have voiced more skepticism about “Marx Got It Right.” On Zhihu, a popular Chinese website for posting questions and comments, users mocked the show’s canned applause and the stilted back and forth between students and professors.

“One of the most important ideas in Marxism is to ‘doubt everything,’” one comment said. “This whole thing made Marx into a great man, but Marx opposed a cult of personality. As for the young representatives, the less said about them the better — just Little Red Guards.”

No such doubts creep into “Marx Got It Right.”