Source: SCMP (5/1/18)
Government is rewriting the history of Hong Kong, one inconvenient phrase at a time
‘Handover of sovereignty’ no longer an acceptable way to refer to the events of 1997, according to government department
By Alvin Lum

The history surrounding the handover of Hong Kong to China is changing. Photo: AFP

After the proposed removal of the words “taking back” from school textbooks to describe the return of the city to China in 1997, the Post has learned that the official protocol office has changed its website to erase any mention of a “handover of sovereignty”.

The Protocol Division, which is responsible for receiving foreign dignitaries and consuls general, was found to have made the changes after the Post filed an inquiry about the guidelines on terms used by the government to describe the handover from Britain. 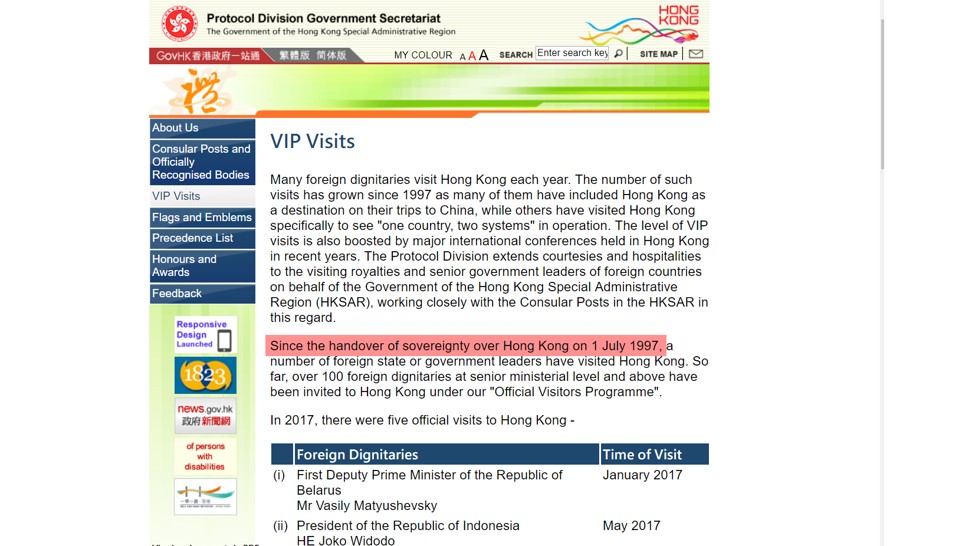 The phrase of “handover of sovereignty over Hong Kong” (highlighted in red) has been removed from the website of the Protocol Division. Photo: HKSAR Government

Originally, the division’s website read: “Since the handover of sovereignty over Hong Kong on 1 July 1997, a number of foreign state or government leaders have visited Hong Kong.”

Hong Kong officials have been using “handover” to describe the city’s return to China since 1997, and the ceremony held on July 1 that year was called the “handover ceremony”.

[Why do Chinese history lessons get a bad reputation in Hong Kong?]

However, in February 2015, the Administration Wing, which oversaw the Protocol Division, issued a circular – Correct Use of Terminology – to all civil servants, to “ensure the [use of certain expressions] are correct in both verbal and written correspondence”.

One of the reminders related to the description of the handover, saying officials should use “return to China/the Motherland” or “resume the exercise of sovereignty over Hong Kong”.

It did not, however, specifically ban the word “handover”.

The circular was understood to be binding on all civil servants, including press officers drafting official speeches and publications.

In response to a Post inquiry, the Protocol Division said it had been “in the course of revamping the website by stages since early April 2018 with a view to making it more user-friendly”.

A protocol spokesman said: “The change you mentioned is part of the updates, among others, being made to the website.”

Asked whether other departments would take the phrase “handover” out of past publications and websites, the spokesman said bureaus and departments would follow the circular on expressions “to ensure they are correctly formulated”.

He added that departments would update their websites from time to time.

The protocol office would not comment on whether the word “handover” had conflicted with previous guidelines.

“Let’s not fool ourselves [over the amendment],” Yeung said. “[‘Handover’] was how the two governments of China and Britain have been describing it.”

The change by the Protocol Division came following the Education Bureau’s external textbook review group sparked a row over terminology, after it said describing China as “taking back” Hong Kong in 1997 was problematic.

It has not recommended what should be used instead.

Hong Kong’s leader defended the review, saying there was “no harm” in history books being a “bit more accurate”.

And, senior officials have still used “handover” and sometimes “taking back Hong Kong” in official remarks.

[Changes to history textbooks offer lessons that must be learned]

The term “taking back” in Chinese was engraved by the government on a monument commemorating the handover in Golden Bauhinia Square in Wan Chai in 1999. Officials built the monument to mark the two-year anniversary of the handover.

Hu Jintao, the then Chinese vice-president, officiated the unveiling ceremony, where he also used the phrase “taking back Hong Kong” in Chinese.

Lam and former chief executives Donald Tsang Yam-kuenand Leung Chun-ying have also used “taking back” in their Chinese speeches before.

Lam, for instance, said in a Basic Law seminar in August 2016 that “in the process of taking back [Hong Kong’s] sovereignty, the nation has emphasised unity of territory”.

Her predecessor Leung also referred to China “taking back Hong Kong” at least four times in official remarks during his time in office between 2012 and 2017.

The phrase “taking back” to describe the return of Hong Kong to China was also documented in Legislative Council debate, and consultation committee documents, when drafts of the Basic Law were discussed in the late 1980s.

A more recent reference to “handover of sovereignty” was made by Secretary for Security John Lee Ka-chiu. Lee used the phrase three times in January when responding to a lawmaker’s written inquiry on military land use.