Source: NYT (4/24/18)
‘We Don’t Perform for People, We Perform for the Gods’
A community has formed around Chinese opera in Thailand, preserving one of the oldest dramatic art forms in the world.
By Malin Fezehai

Backstage with the Sai Yong Hong Chinese Opera troupe. Actors spend hours applying layers of makeup and working on their hairstyles before performing.

BANGKOK — “Anywhere they play in Bangkok, I’ll be there,” said Warin Nithihiranyakul, 73, a dedicated fan of the Sai Yong Hong Chinese Opera troupe for more than 10 years. While waiting for his friends to arrive, he helps out by starting to set up plastic red chairs for the audience to watch the evening’s performance in an area just south of Bangkok’s Chinatown.

A devotee of 11 years, Wandee Tengyodwanich, 62, unwraps several small plates of Chinese dough sticks and cake, passing them around to her friends in front of the stage before the show. She says that Sai Yong Hong is the best Chinese opera in Thailand because it invests in very elaborate costumes. She and her friends go to see the group a couple of times a year. They eat and catch up as they reminisce about the first time they saw Chinese opera as children. 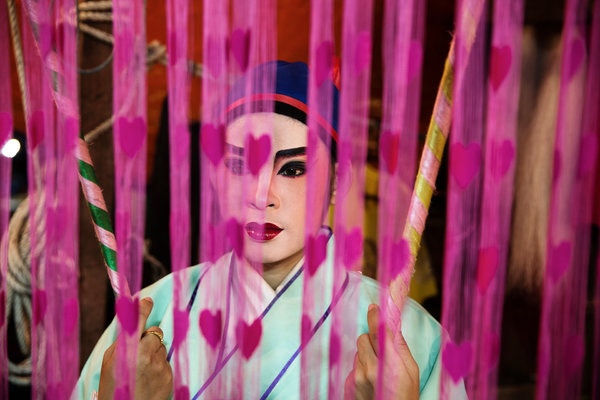 They are part of a shrinking community of people that has formed around Chinese opera in Thailand. They are preserving a cornerstone of culture and heritage dating to the seventh-century Tang Dynasty (618 to 907), making it one of the oldest dramatic art forms in the world.

Like so much of Chinese opera throughout the world, the performances are a product of a large Chinese diaspora. Sai Yong Hong is one of about 20 Chinese opera troupes in Thailand. The audience consists mostly of older Thai-Chinese adults, some of whom take their grandchildren to connect with a cultural memory that has been passed down for generations.

Chinese migration to Thailand can be traced to the 13th century, according to the Minority Rights Group. Today about 14 percent of the population is ethnically Chinese, according to World Population Review, making Thailand the home of one of the world’s largest Chinese communities outside China. 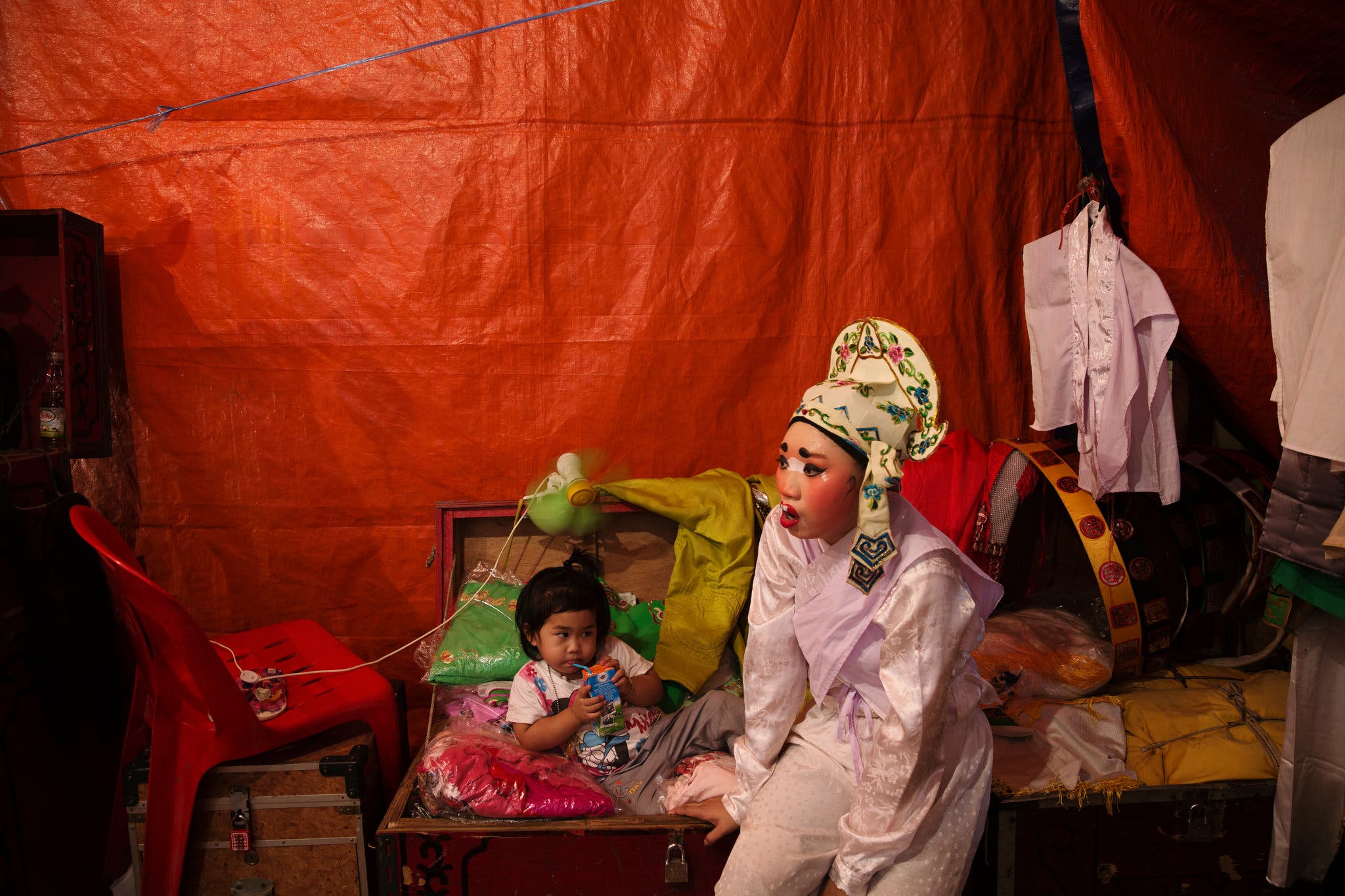 On a recent afternoon, actors had spent two hours applying layers of makeup backstage, transforming into gods and goddesses, heroes and villains from Chinese folklore and mythology.

At around 7:30 p.m., the actors and actresses of Sai Yong Hong took the stage and the performance began.

The performance mixes elements of martial arts, singing and dancing, accompanied by music played on traditional Chinese instruments like the hammered dulcimer and the four-stringed pipa. Their scripts are primarily based on Chinese folk stories, but some are adaptations of Indian movies. They are delivered in Teochew, a dialect originating in Southern China. 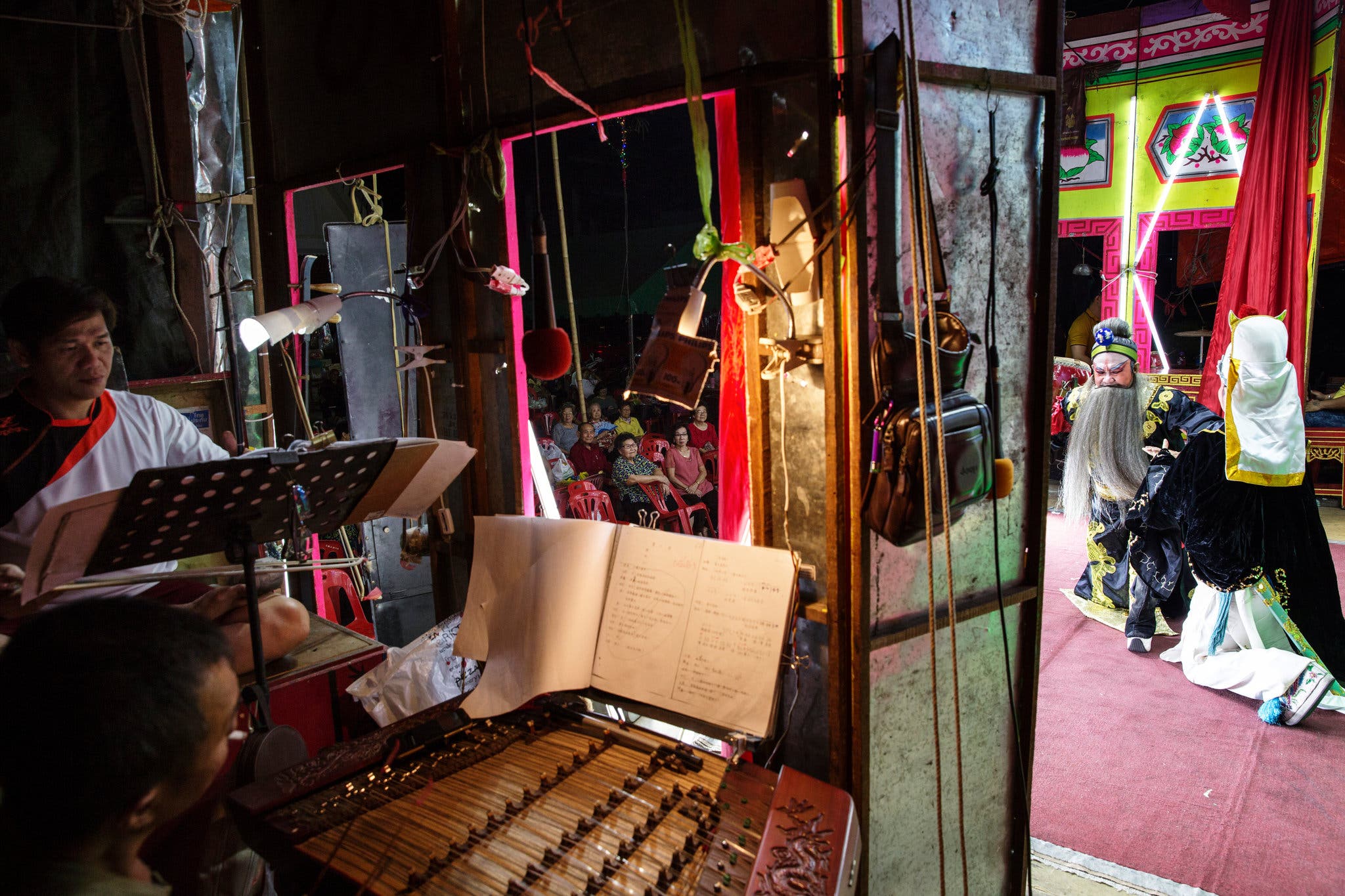 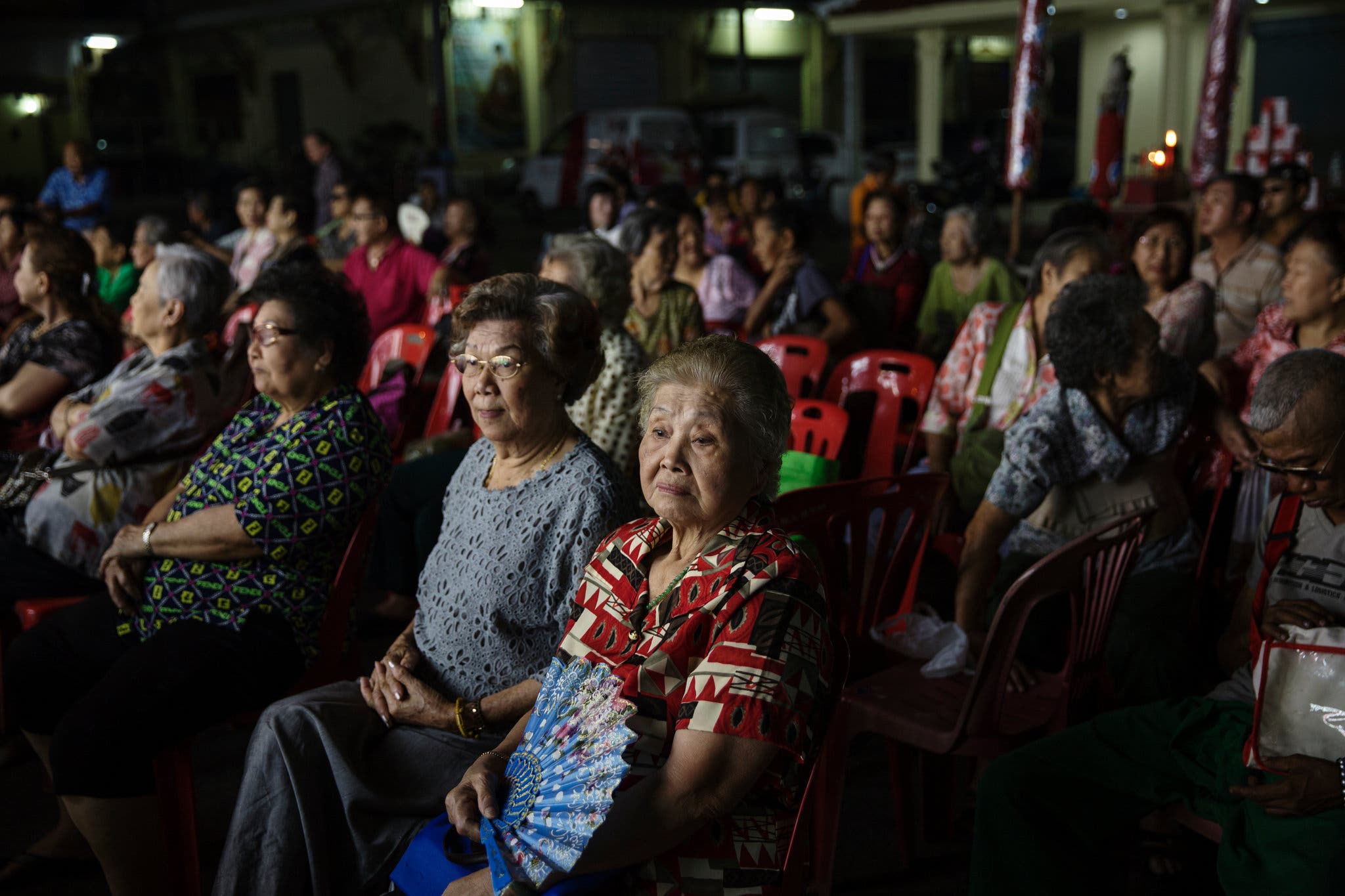 Sai Yong Hong is one of the best-known troupes in Thailand. It has 34 actors, five of whom are from China and the rest from Thailand, and, on that night, about 60 people attended the performance. The manager, Tatchai Obthong, 52, said that when he was younger a troupe would have about 100 actors and the crowds were much larger. 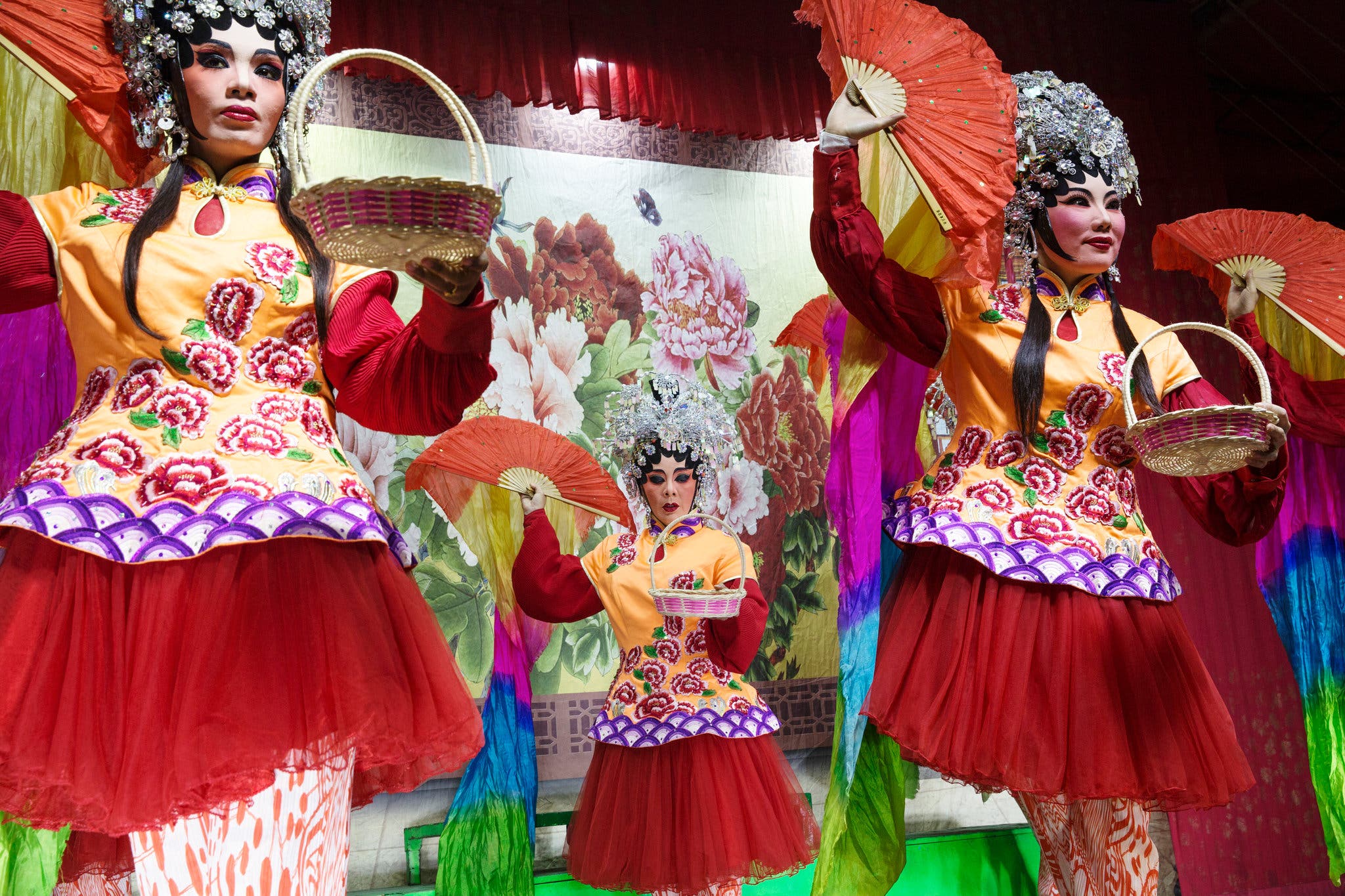 “I didn’t like it — it was loud and scary,” he said of the first time he saw a Chinese opera as a child. Mr. Tatchai, who is Chinese and Thai, has been in the industry since he was 7. His mother had left his father and was struggling with a gambling addiction. Having fallen on hard times, she took Obthong, a childhood fan of martial arts movies, to see a Chinese opera performance.

He remembers that it was hard for him to adapt because he wasn’t allowed to speak Thai and had to learn Teochew, but he quickly realized that to survive he had to learn the craft and the language. He began by serving as a roadie and eventually went to work with a Chinese opera company in Singapore, where he learned more about the performance aspect, before returning to Thailand, where he has worked for the past 12 years. 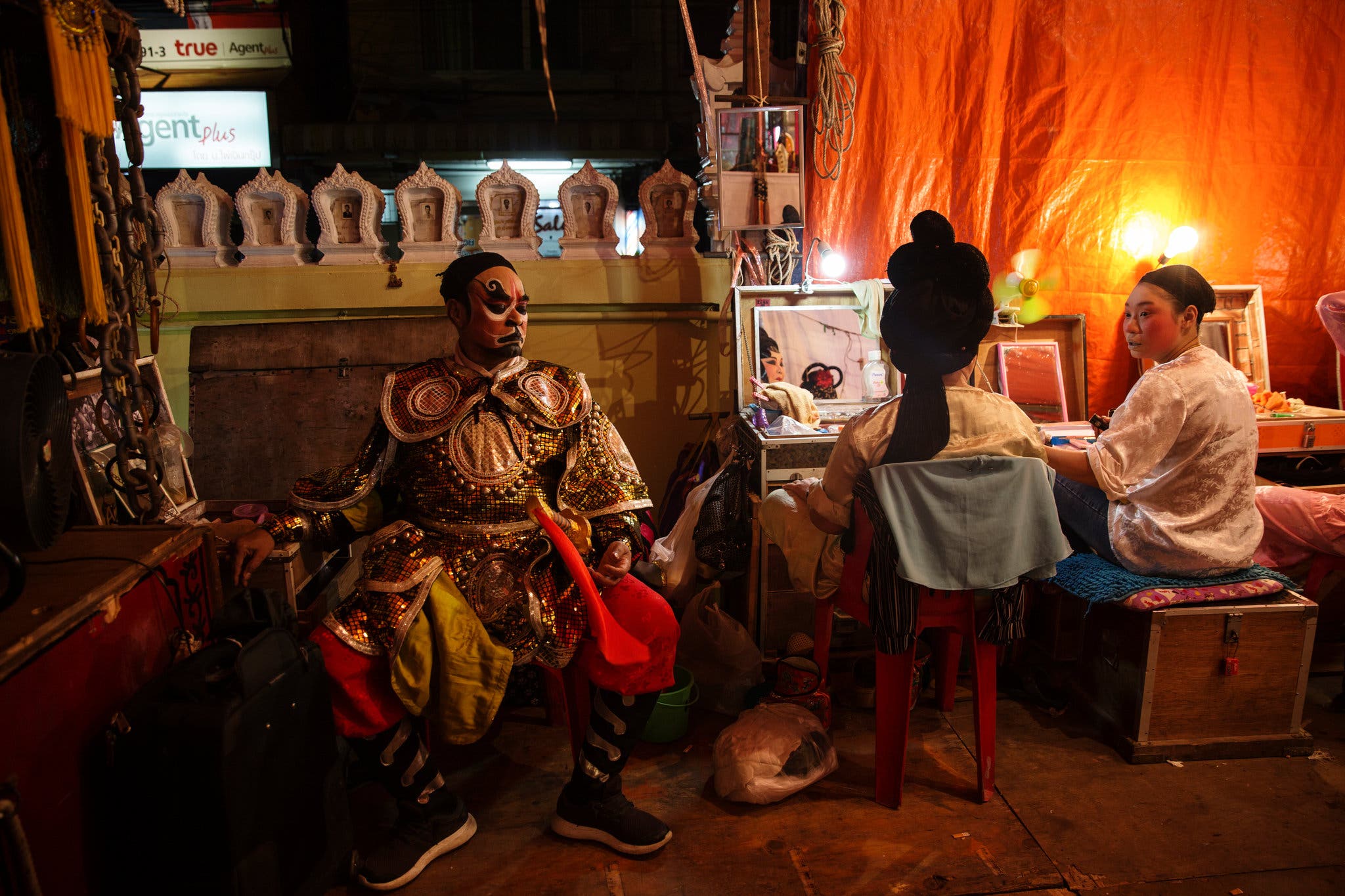 The troupe’s manager, Tatchai Obthong, left, in costume. He has been in the industry since he was 7.CreditMalin Fezehai/The New York Times

Performances are free — they are commissioned by shrines in Bangkok and sometimes around the country. “We don’t perform for people, we perform for the gods,” Mr. Tatchai said. They transport the stage with a six-wheel truck and assemble it at each location where they perform. The whole troupe gets paid 20,000 baht (about $640) per night.

For many of the actors, the stage is home. “Now it’s a high season, so we travel together all the time,” Mr. Tatchai said. After the show, some will sleep under the stage or set up tents nearby. 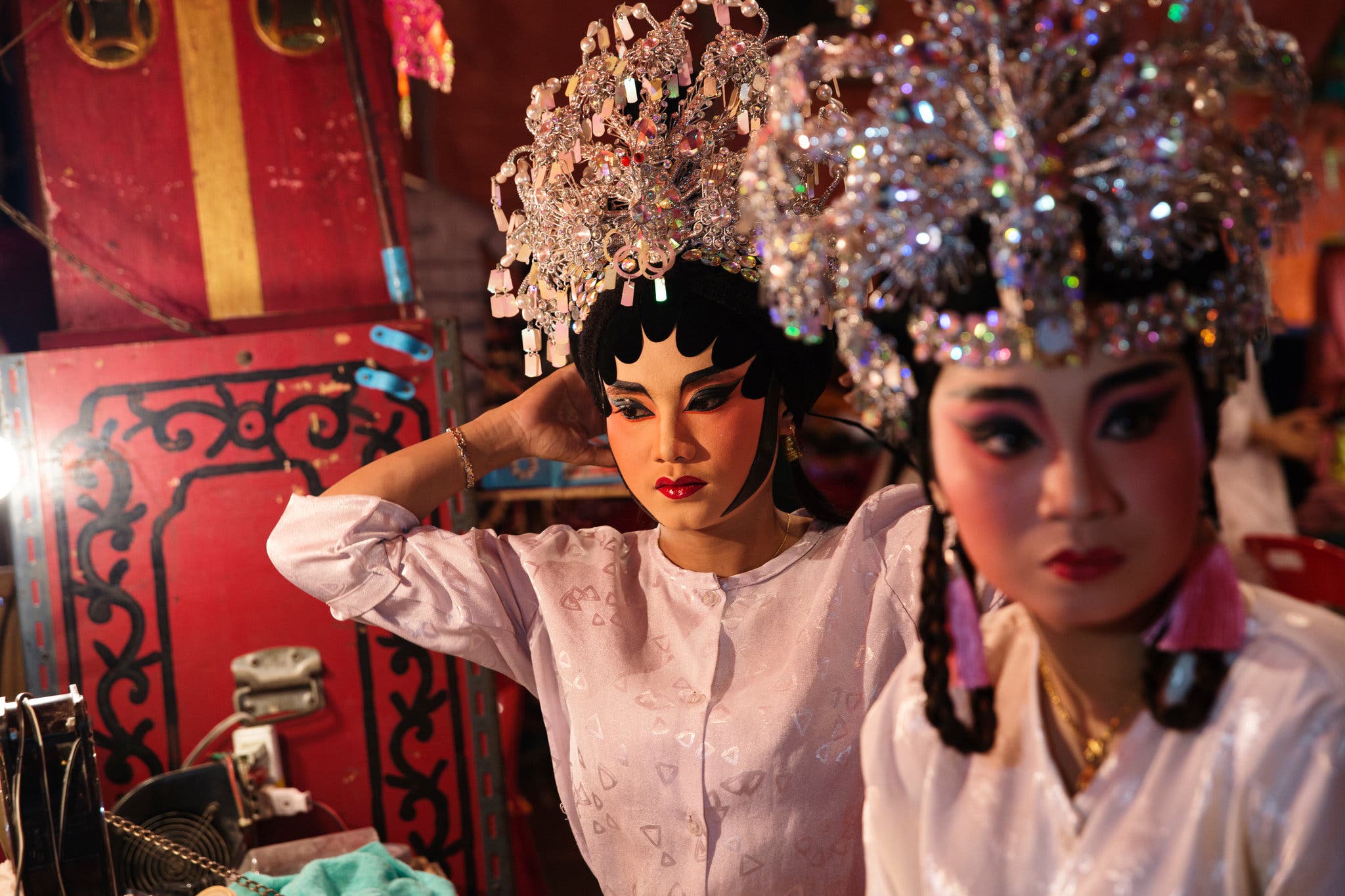 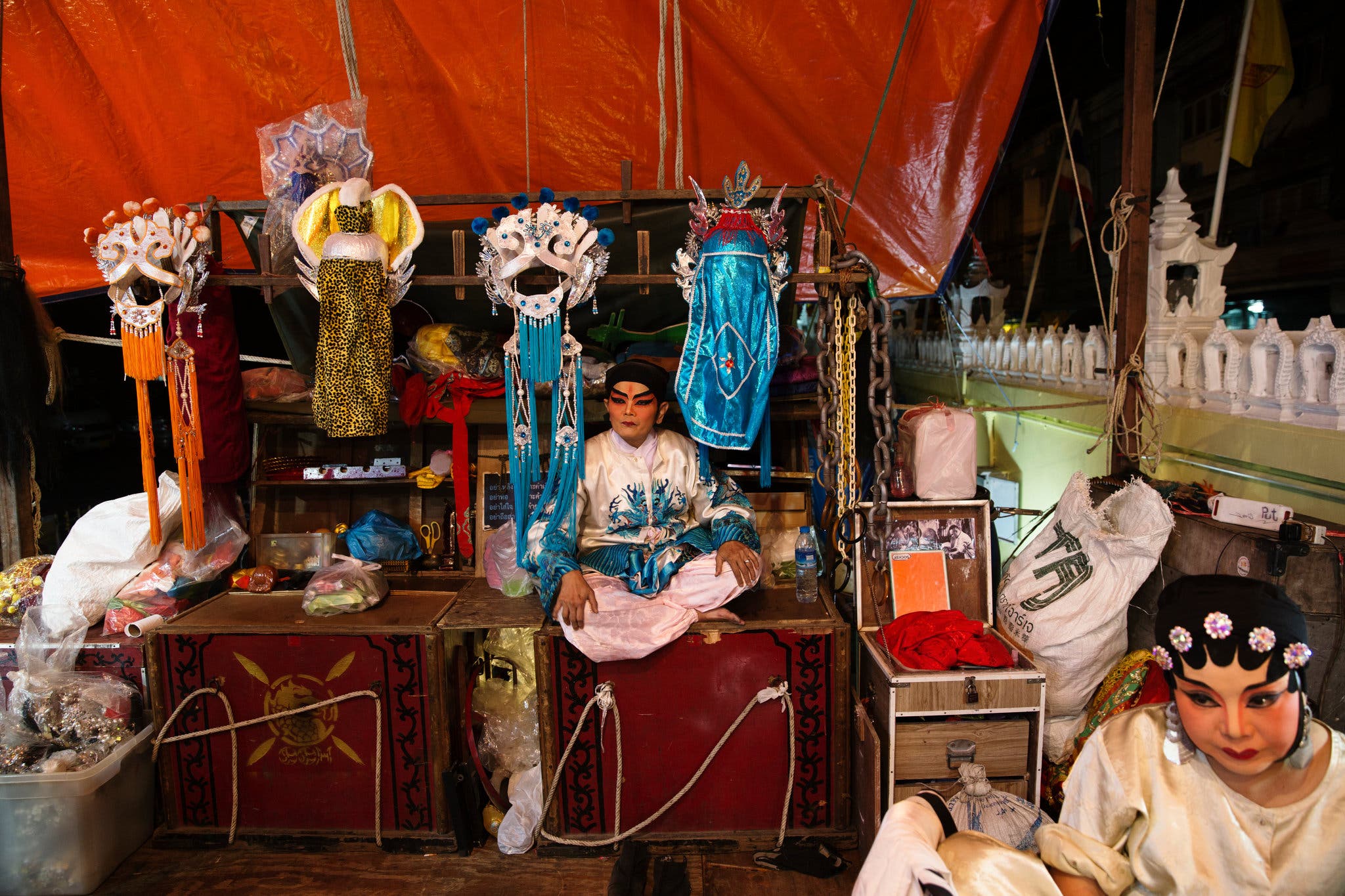 Malee Saewong, 53, center, has been a part of this troupe for four years and has been acting since she was 14.Credit Malin Fezehai/The New York Times

One performer, Somsak Saetae, 62, has been an actor with the group for more than 10 years. He has been in the industry since he was 8 and has seen its evolution. “In the past, women couldn’t set foot on the Chinese opera stage, and all the performers were men,” he said. “Women could not even touch the shrine, only men were allowed; now the whole industry has changed.”

Today even some of the male roles are played by women, like Malee Saewong, 53, who has been a part of this troupe for only four years but has acted in other troupes since she was 14. “I am old now so I get to play male characters, but it’s easier because you don’t have deal with doing your hair,” she said. 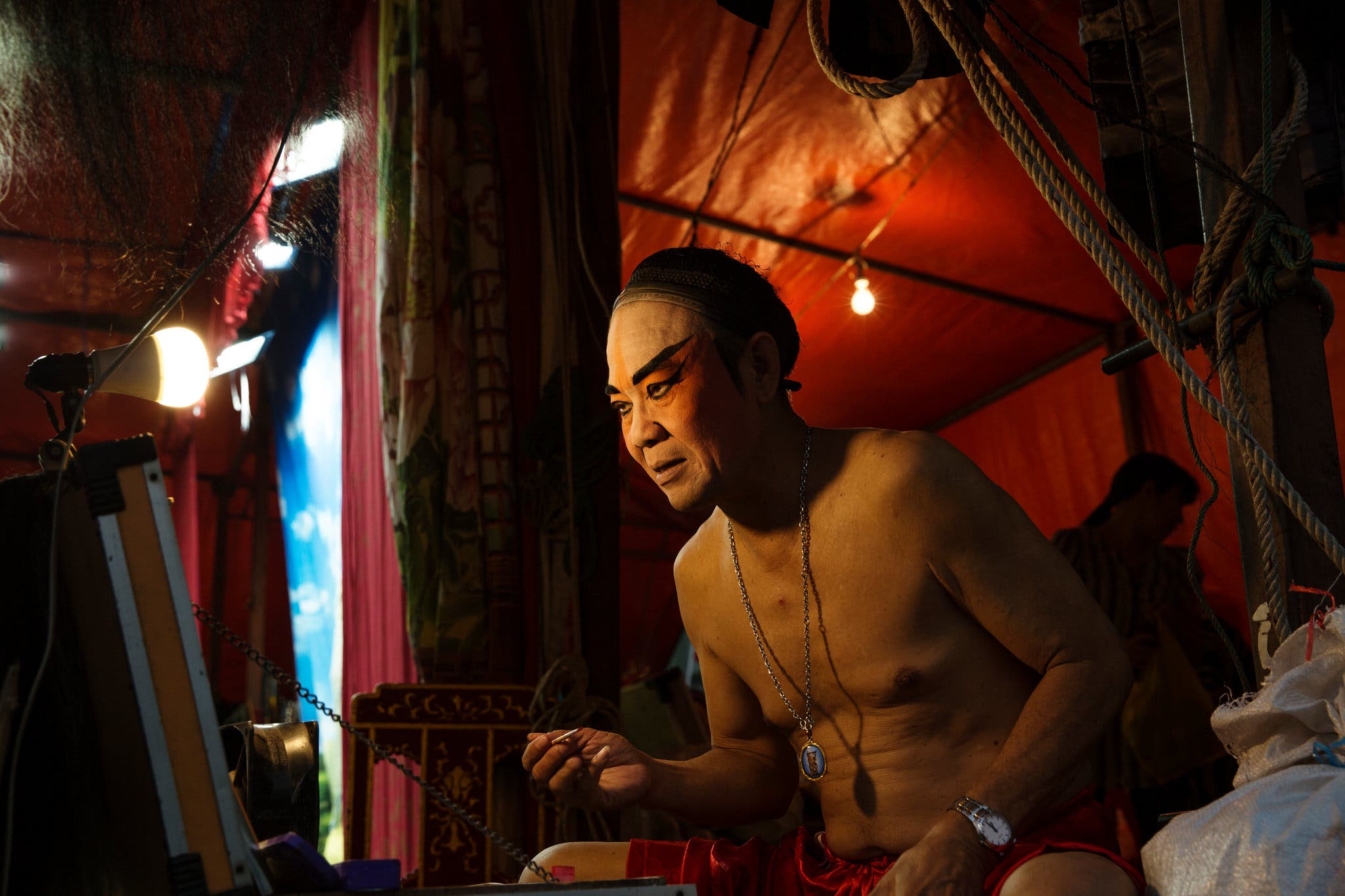 Somsak Saetae, 62, applying makeup before a show. He has been an actor with the troupe for over 10 years and has been in the industry since he was 8.Credit Malin Fezehai/The New York Times

Prasong Piewnen, 56, is the group’s cook and cares for her sleeping grandson after the show. Her husband is a musician and her daughter an actress in the troupe. Ms. Prasong said that she was used to this way of life. “If I stay at home, it’s just too quiet,” she said.

As the community ages and audiences dwindle, there is a fear that the art will die out. Performers face uncertain futures. Mr. Somsak said that he wanted to continue performing as long as he could. “In this industry when you retire you just simply say to the gods, ‘You know I’m getting old now, please protect me until the end,’” he said.

Mr. Tatchai has seen the changes as well, and he said he thought the industry would continue to get smaller but would not go away.

“As long as Chinese shrines exist and people continue praying,” he said, “the Chinese opera will be here.” 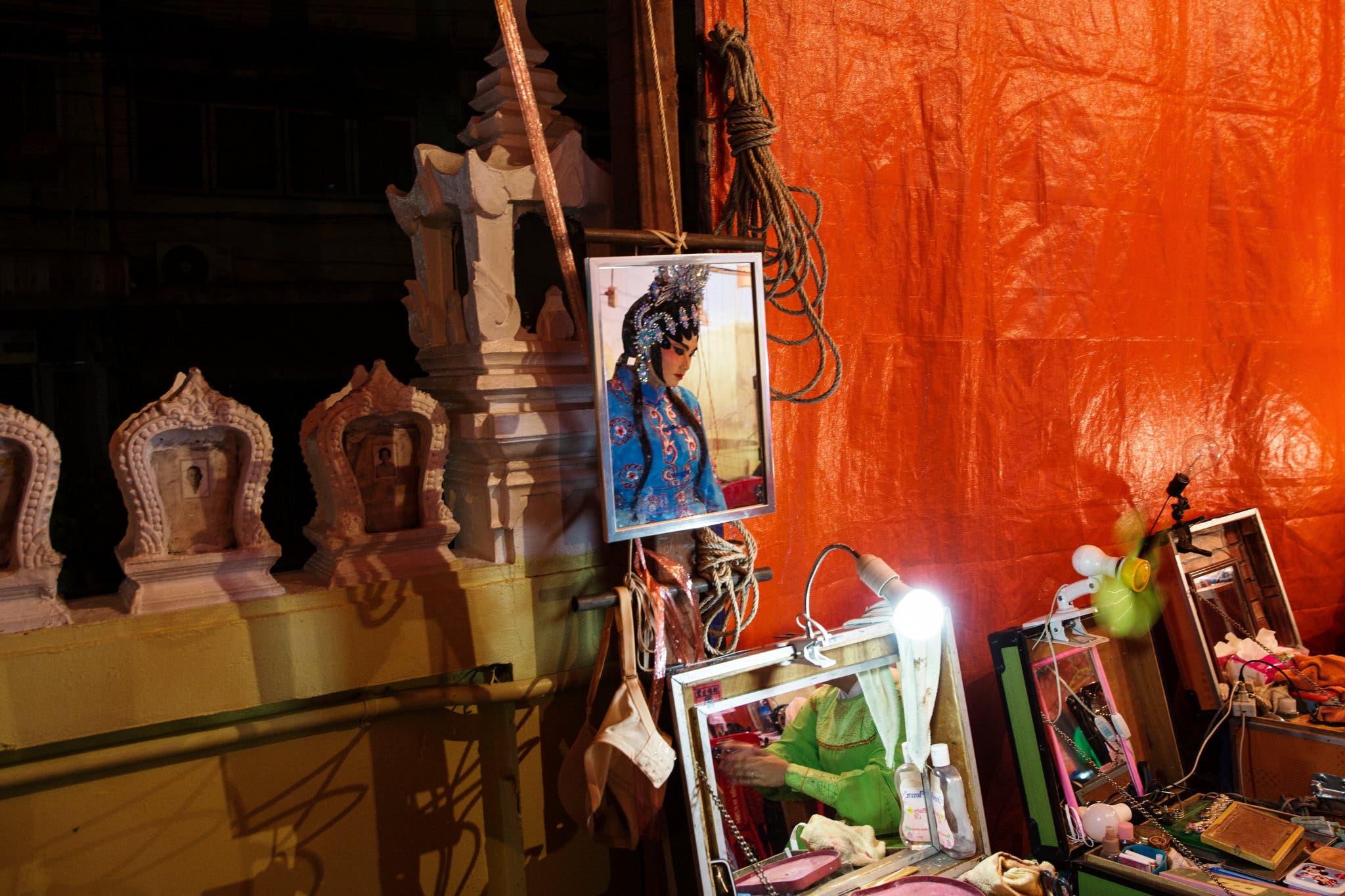