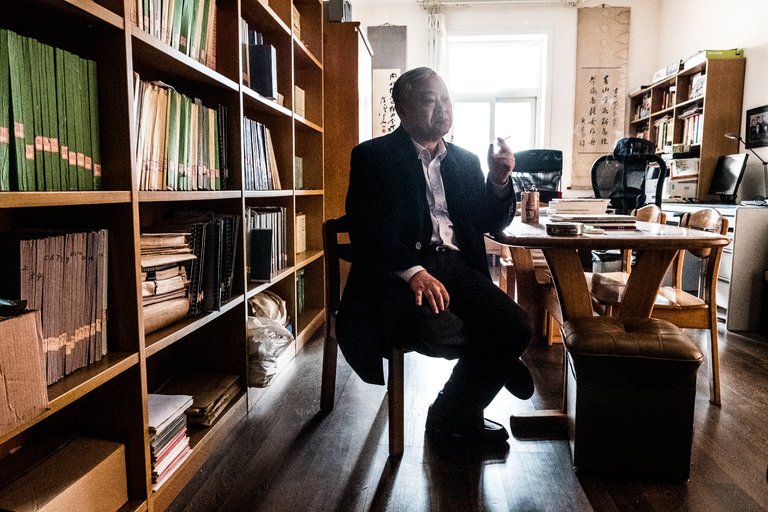 The Chinese historian Shen Zhihua, who has an impeccable Communist Party pedigree, argues that the party need not fear being challenged about its past. Credit Bryan Denton for The New York Times

BEIJING — Shen Zhihua, bon vivant, former businessman, now China’s foremost Cold War historian, has set himself a near-impossible task. He wants China to peel back its secrets, throw open its archives and tell its citizens what went on between China and the United States, between China and North Korea, and much more.

Even before the hard-line era of President Xi Jinping, the Communist Party has acted like a supersensitive corporation, blocking highly regarded historians like Mr. Shen from peering too deeply. Precious documents have been destroyed, stolen or kept under seal by librarians skilled at deflecting the inquiries of even the most tenacious researchers.

“Chinese leaders have historical baggage,” Mr. Shen, who will turn 68 next month, said over a glass of white wine at a handsome villa hidden behind a high wall in the heart of Beijing. His tousled graying hair, casual jacket and open-necked shirt depart sharply from the buttoned-down party look.

“The party was popular, but after 1949 the party made a lot of mistakes: land reform, the Cultural Revolution, the Great Leap Forward. People might ask: ‘Since you have made so many mistakes, why are you still in power?’ ”

The party is unnecessarily nervous, he argues. “If you look at Chinese history, none can replace the Communist Party. Most of the elite is in the party. The party shouldn’t worry about being challenged. If I was running the propaganda department, I would say: ‘Those mistakes were made in the past, not now, and we need to learn from our mistakes.’ ” 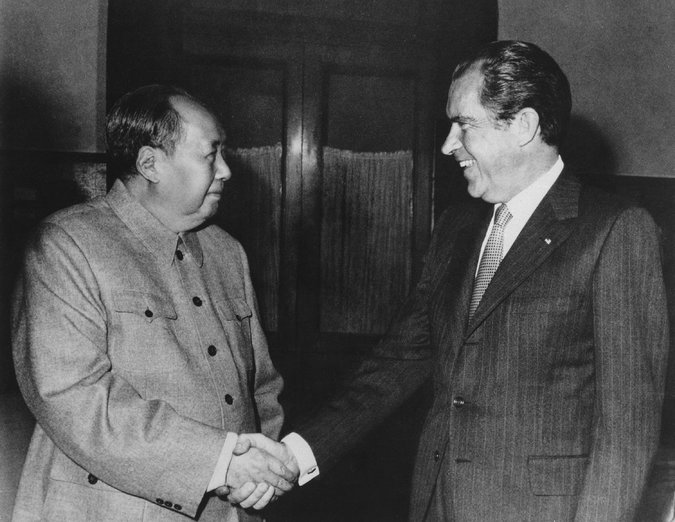 China’s version of President Richard M. Nixon’s visit in 1972 and its accounts of earlier trips by Henry A. Kissinger remain largely unknown because the Communist Party has blocked even Chinese historians from looking into its files. Credit Associated Press

Hence, China’s version of Nixon’s visit in 1972 and its accounts of the precursor trips by Henry Kissinger remain largely unknown. What went on between Mao and the North Korean leader Kim Il-sung during the Korean War is only sketchily understood from China’s point of view.

With Xia Yafeng of Long Island University, Mr. Shen is the author of the seminal work on China’s relations with North Korea, “A Misunderstood Friendship: Mao Zedong, Kim Il-sung and Sino-North Korean relations 1949-1976,” which will be published in English later this year. The book relies heavily on the archives in Moscow and Central Europe that tumbled open after the collapse of the Soviet Union.

But he made some lucky finds in libraries in northeastern China, too, while also extracting papers from reluctant librarians at China’s major archives. And through his connections with top party officials, he secured access to a memorandum of conversations between Mao and the North Korean leader, a trove that had never before been made public.

In the book, Mr. Shen demolishes the myth that China and North Korea were tightly allied, “as close as lips to teeth,” as China’s propagandists insisted. He shows that even before the start of the Korean War in 1950, relations between the two newly installed Communist parties were tense. Mr. Kim, the grandfather of the current North Korean leader, Kim Jong-un, invaded South Korea without notifying Mao. The Chinese were informed three days after the fact.

Despite his current pursuits, Mr. Shen is hardly the scholarly sort who has spent his life buried in the stacks. He started out as a crack Navy pilot, but that ended when he was falsely accused of murder by a jailhouse snitch. Mr. Shen was freed after the informer recanted, but was jailed again in the early 1980s on an accusation of spying for the United States.

Mr. Shen says the spying charge stemmed from his giving some articles and documents on Chinese agrarian reform to an American student who, unbeknown to him, was suspected by the authorities of having links to the C.I.A.

During his two years in prison, he invented a way to write by fashioning an empty toothpaste tube into a pen. He asked for books on Mao, Marx and Lenin (“The prison authorities didn’t dare deny that”), and wrote notes for his first work — on Soviet agriculture — in the margins of the Soviet Union’s “New Economic Policy,” using an upturned washbowl balanced on his knees as a desk. 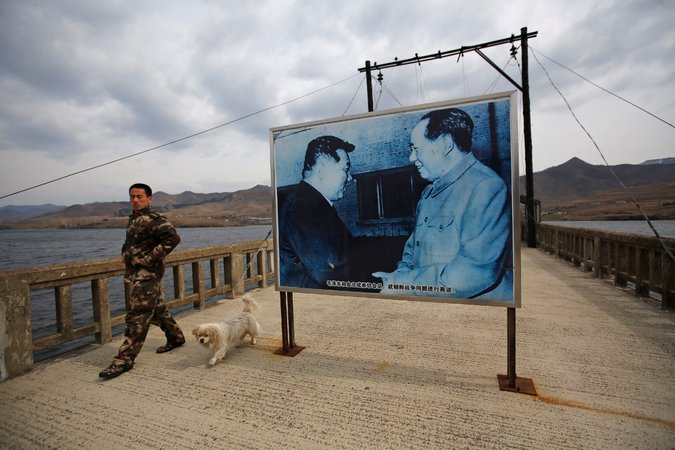 A picture of Mao Zedong and the founder of North Korea, Kim Il-sung, displayed in Hekou, China, in 2013. In his new book, Mr. Shen demolishes the myth that China and North Korea were tightly allied during the Cold War, “as close as lips to teeth,” as China’s propagandists insisted. Credit How Hwee Young/European Pressphoto Agency

When he got out of jail the second time, he had weathered enough to know that his personal diary — a foot-high stack of notebooks going back to high school — was a time bomb, one that the authorities could use for blackmail.

So in 1985, before heading to southern China to begin a career in business, he burned the diaries, tossing them page by page into a coal furnace, an odd act for someone who would later campaign for the preservation of records. “Very bittersweet,” he said. “I didn’t want to leave anything in writing which might cause me further trouble.”

It was the period of China’s economic reforms, and Mr. Shen became a successful gold trader, eventually earning enough to quit the business and devote himself full-time to his historical research.

Mr. Shen grew up in Beijing, the son of a successful Communist Party bureaucrat who rose to become the second in command of China’s prison system. Despite Mr. Shen’s run-ins with the communist system, he holds an almost perfect Communist Party pedigree: his father had joined Mao at his army base in Yan’an during the civil war and his father-in-law was a good friend of the father of the current president, Mr. Xi.

He appreciates that delving into the Communist Party’s past requires functioning like a guerrilla historian, not a starchy academic, so he has taken his drive for transparency beyond China’s borders.

His government-funded Research Institute for Asian Neighborhood Studies in Shanghai allows Mr. Shen and his students to travel to one-party states in Asia and Eastern Europe to collect documents that are then copied and cataloged at the institute.

North Korea would seem a natural hunting ground. On a visit to Beijing, a senior North Korean official invited Mr. Shen to Pyongyang to look at the archives, airfare and lodging paid, but he declined. “I was worried if I went, I wouldn’t be allowed out.” 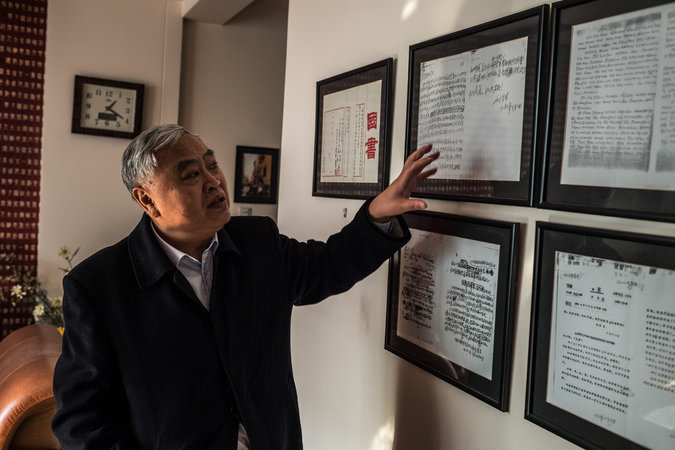 “You can see how much attention and admiration he commands when he speaks at forums in China,” said Charles Kraus, a historian who specializes in China at the Wilson Center in Washington, where Mr. Shen is a senior fellow. “In Changchun in 2015 I remember there were even Shen Zhihua fanboys waiting in the hotel lobby hoping to catch a glimpse of him and get him to autograph books.”

Mr. Shen will never give up the chase for China’s historical secrets. But he wonders if the really important documents even exist at this point.

When they left office, many senior officials ransacked the files. Zhou Enlai’s wife is rumored to have taken archives and shredded them. Mao’s wife is believed to have destroyed documents, too.

The Chinese Communist Party kept far fewer records than the party in the Soviet Union, where the unleashing of the archives led to a whole new industry of Cold War history.

“Russia has a tradition of keeping records,” he said. “The Chinese Communist Party grew out of an underground operation, was very secretive and didn’t record many things. Of the 1950s Politburo meetings there are few records. They never wrote things down.”

He is thankful his political connections have helped him to at least get in the door of important Chinese archives. But being inside is often not enough.

A friend in the bureaucracy once explained the problem, he said: “ ‘You know about the 1996 law,’ ” the friend told him, “ ‘But you don’t know about the 10 no’s. There’s no looking up religion, diplomacy, personal affairs of state leaders.’ I said, ‘What can I look up?’ The person said, ‘Basically nothing.’ ”