We need to talk about that Africa skit. You know the one.

Let me say up front that it’s dangerous and somewhat irresponsible to analyze a Chinese production — particularly one intended solely for a Chinese audience, whose understanding of ethnicity and race is filtered through a complicated and unique culture and history — through a purely American lens. I’ve watched this skit carefully, and I can’t find any intent to offend. Which is to say, there’s no real need to call it racist.

But this skit is clearly offensive — to sensibility, to foreigners, to intelligence, to one’s self-respect. To theater. To creativity. It is condescending, and willfully so, making it all the more offensive. It is arrogant and tone-deaf and shallow. It’s hard not to be embarrassed.

Everyone involved, from thin-skinned director Yang Dongsheng 杨东升 to the censors who waved this through, are guilty of laziness or ignorance or most likely both. They are guilty of not knowing about the repugnant history of minstrel shows in the U.S., where blackface was deployed. Or, judging by how aggressively they’ve been censoring duly deserved criticism, they don’t care. That’s worse, but should we expect any better? For years now, they’ve been brazenly telling the half-billion viewers who tune in every year that we don’t matter.

“None of the skits today got a giggle out of me. I feel like foreign media’s gonna blow up tomorrow, it’s gonna be bad for CCTV,” one person wrote on Sina Weibo after the show, in a comment that has since been censored. “Especially terrible was [lead actor] Zheng Kai’s skit — it was a little racist: Africans equated with monkeys, and that African mother performed in blackface. I wonder how that skit got approved.”

“The idea of and language in that Africa skit is being racial,” another viewer wrote, in a post that has since been censored (he wrote “being racial” in English, which might be a stand-in for “racist,” but I don’t want to assume). “It makes people uncomfortable. If it were performed in a foreign country, black people would be up in arms. [The skit wants to show China as] the center of the universe.”

“Watching that Africa skit made my whole body sick,” someone else wrote, in a post that has since been censored. “I can imagine how the show will be discussed on Weibo, but I’m so tired of talking about it.”

This skit was bad. How can viewers understand this but the directors — those in charge of putting on the most-watched show in the world — not? How can the censors — those Argus-eyed gatekeepers — not?

It’s clear, isn’t it, the priorities of China’s censors at the highest level? They don’t much care about the image that China projects abroad or what foreigners might think; they simply don’t want their own citizens to be led astray — by foreigners. The image of Africa that must be projected to a Chinese domestic audience is of a place where prelapsarian natives with hearts of gold are grateful to Zhongguo for lifting them out of economic darkness with infrastructure projects via the Belt and Road Initiative. If it takes a Chinese woman in full blackface to drive that point across, then why not?

The skit, which is called 同喜同乐 (tóng xǐ tóng lè, a rough translation of which might be “Celebrate Together”), begins with a lion’s roar and an African dance accompanied by the 2010 official World Cup song “Waka Waka,” a.k.a. “This Time for Africa.” It is set on a Kenyan veld, because why not go full cliché?

This is Ryan Zheng, a.k.a. Zheng Kai 郑恺, a young Shanghai actor who, like all Chinese actors, must have jumped at this opportunity. I feel bad for him.

Zheng’s character announces that the China-constructed Mombasa-Nairobi Railway is about to begin operations. He introduces some train attendants who take the stage to “Waka Waka” again. (These women are reportedly studying at Southwest Jiaotong University to actually work on Kenyan trains, which is kinda cool.)

Zheng also reveals that this is the day he’s to marry a girl named Liu, and that his future brother-in-law is arriving soon to administer the wedding. The stage clears, including the gazelles and zebras, as Zheng asks everyone to go practice some more before the official opening.

A young woman named Kari (I’m not sure how the name should be spelled, but she’s depicted admirably by a Gabonese woman who’s identified in the credits only by her Chinese name, Zhou Aile 周埃乐) rushes onto the stage to apologize for being late. It’s all because her mother — like a true Chinese mother, even though she’s black (well, sort of…just hang on) — has arranged for her to go on a blind date, apparently with the belief that getting a job with the railroad has “changed her status,” and that finding a “tall, rich, handsome” man (高富帅 gāo fù shuài) means that she’ll have “won.”

The girl tells Zheng (who is her teacher) that she is only 18 and wants to work for a bit before marriage, and that she wants to visit China.

“Help me out,” the girl pleads as her mother arrives. “Whatever I say, you say.”

This cover identity anomaly trope was used earlier in the show, and is in fact one of the most commonly used tropes in Chinese sketch comedy, but never mind that for now. Let’s take a look at the mother:

That’s Lou Naiming 娄乃鸣, a renowned and respected Chinese actress and producer, who, in addition to going full blackface, also sported butt padding and was accompanied by a monkey. These are just facts.

“An African friend leading a monkey, that’s racist, isn’t it?” said a viewer on Sina Weibo, in a comment that has since been censored. “How can foreign friends not be angry after watching this? This show’s dumb as hell.”

The young lady Kari, to get her mom off her back, of course pushes Zheng forward as her boyfriend. Comedy ensues. As they’re talking about marriage, Zheng’s in-law shows up:

There’s a joke here about the giraffe being an “African shared bike.”

Kari enthusiastically greets the in-law as “brother,” which leads to one of the least self-aware moments of the skit (or most? It would be one hell of a meta joke): The in-law looks at her and says, “Who did your makeup? How is it so real?”

I won’t go through all the hijinks that followed, including a wedding rehearsal, except to point out that at one point Kari says, “The Chinese and African people are one family,” to warm applause, and that Kari and Zheng say together, with hands clasped and fully embodying the symbolism, “It was the Mombasa-Nairobi Railway that linked us together!”

“Since this was a Mombasa-Nairobi Railway union,” the in-law says, rattling off a list of felicitations, “I hope you quickly give birth to a big fat white child!”

“Not necessarily,” says the mother. “It might be a big fat black child.”

The two then argue about the possible color of Zheng’s child, which Kari and Zheng interrupt by announcing their plans to have twins.

Of course, eventually, Zheng’s actual bride shows up, and the conflict speeds toward resolution — but not before the monkey gets involved:

Upon confessing the ruse to her mother, Kari once again gets a most crowd-pleasing line:

“I want to study in China, I want to be like Chinese people, pull up my sleeves, keep working hard, let people from around the world all give us a thumbs-up!”

But Lou Naiming isn’t to be so easily upstaged. “Why didn’t you tell Mama earlier?” her character asks.

“I was afraid you wouldn’t agree.”

“How could I possibly not? When I was young, it was a Chinese medical team who saved Mama’s life. Now China’s children are coming to Africa to build railroads for us, and they’ve been so outstanding in raising my Kari. I love Chinese people! I love China!”

And then the finish:

And that’s it, an ill-conceived 13-and-a-half-minute sketch with some generally good performances that ultimately couldn’t redeem it. In Xi Jinping’s China, national performances of culture and art must serve the purpose of promoting Chinese interests. Nothing is apolitical, and judging this skit through that lens, it must have seemed like a great success: well acted, topical, timely, colorful, musical, with a happy ending.

As for the rest of the show? It wasn’t all bad: There was some nice poetry, some classics from Chinese pop, some wushu, and Stephon Marbury becoming a made man in China. I thought this skit at the start of the show was genuinely funny, and not only because of the fake (why?) Lakers jersey this woman is sporting:

If you were able to overlook the excessive moralizing and lecturing in the skits, and the shameless propaganda, it’s possible to come away from the CCTV Spring Festival Gala thinking there were several fun bits. Everything happening here, for instance: 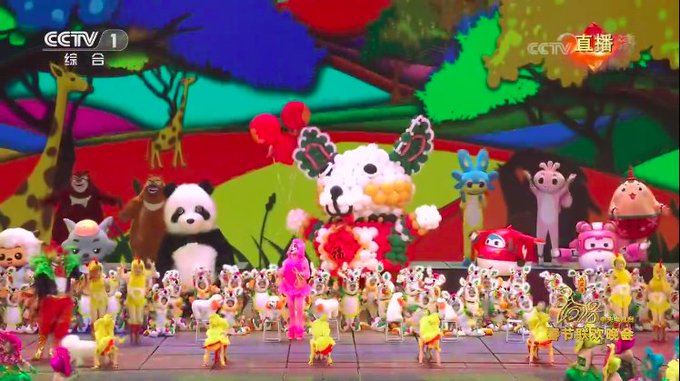 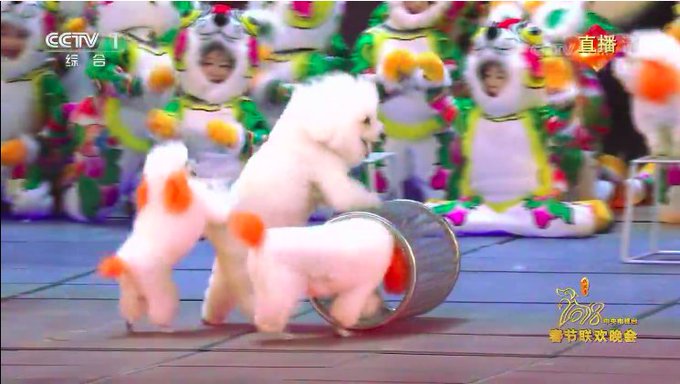 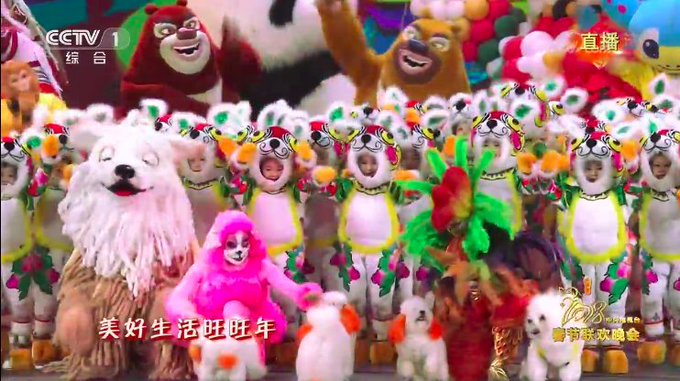 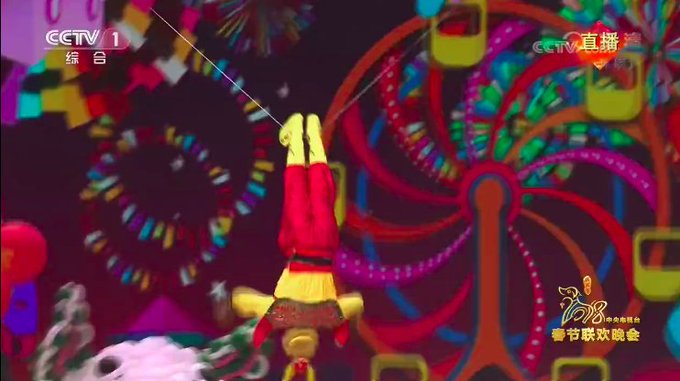 For more, go check out What’s on Weibo, where Manya Koetse did God’s work by live-blogging the entire thing.

There is one more thing I wanted to point out.

After some cheeky chap noted that in one of the scenes, “there’s a man fucking a lion,” this image has now been scrubbed from the Chinese internet:

With reporting by Jiayun Feng

The original Chinese of the deleted quotes we used above, in order of appearance: