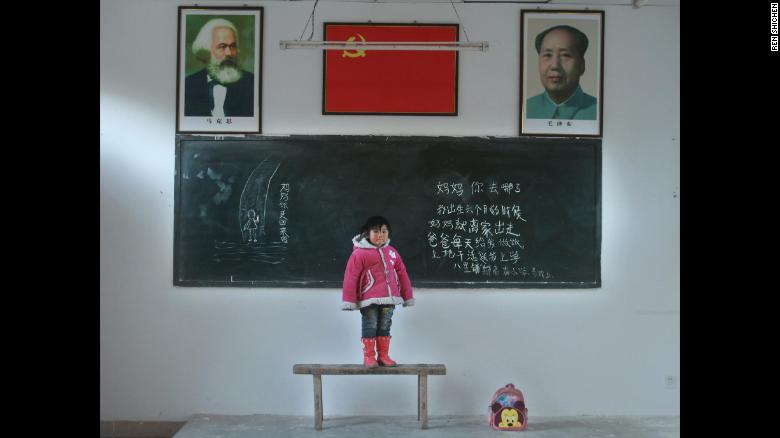 Photographer documents plight of China’s left-behind children For more than a three years, photographer Ren Shichen has traveled around China taking portraits of the country’s left-behind children. Each child poses in a classroom with a message for their absent parents on the blackboard behind them. Here, Gou Lingyu, 6, from Gaomiao Elementary School, Balipu County asks: “Mommy, where did you go? Mommy left home when I was six months old. Daddy cooks for me every day and works in the field and takes me to school. On the left hand side of the board is written: “Mommy, are you coming back?”

(CNN)For more than three years, photographer Ren Shichen has traveled across China taking portraits of the country’s left-behind children — some of the estimated nine million young kids that are currently growing up without Mom or Dad in China.

His goal is to shed light on the psychological costs of China’s economic boom — the ones borne by rural children whose parents have left their villages to work in China’s cities, often for years at a time, leaving them in the care of grandparents or other relatives.

“Many parents left home when their kids were one or two years old. When they call home now, the children don’t pick up. There’s no emotional connection any more,” says Ren.

Concern over the plight of these left-behind children and rural poverty resurfaced last month after Chinese Internet users were touched by “Frost Boy.” A photo of third grader Wang Fuman, his hair iced over from his three-mile trek to school, went viral on Chinese social media. 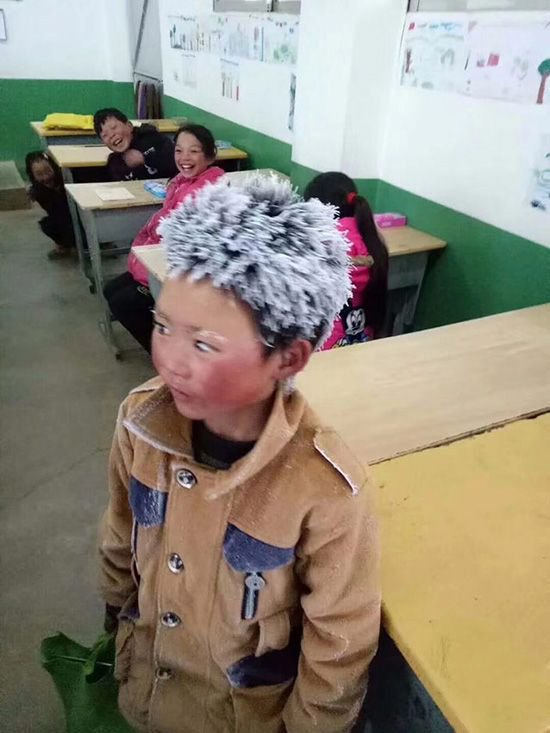 The boy in the viral photo who was covered in ice and frost after his long walk to school has received many calls from people across #China offering aid. Local authorities responded by launching a program to provide warm winter clothes to the boy and other children in the area.

Ren estimates he’s taken the portraits of more than 100 children who have been left behind by one or both parents, most of them in his home province of Gansu, China’s poorest. He gets permission from each child’s guardian before taking their picture.

What’s mesmerizing about his images is their striking similarity — each child is posed in a classroom with a message for their absent parents on the blackboard behind them. The kids appear unsmiling, chalk in hand and their school backpack at their feet.

In 2017, Ren won a third place in the Sony World Photography Awards for portraiture. 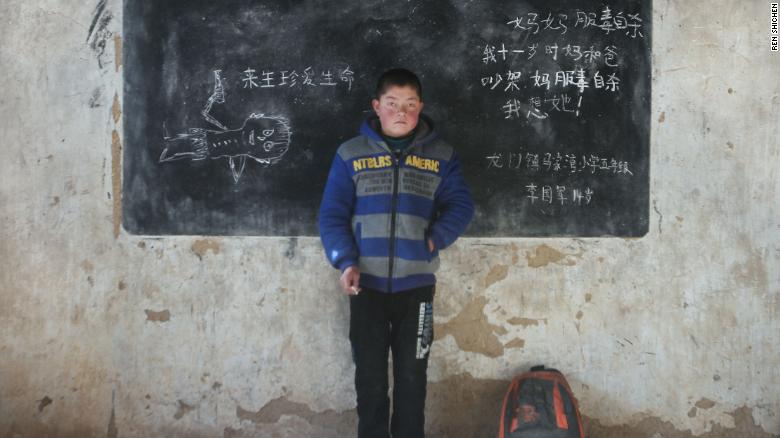 “Cherish life in afterlife. Mom committed suicide after arguing with dad when I was 11. I miss her!” wrote Li Guojun 14 years old, at Majiawan elementary school, Longmen county.

Ren has heard some heartbreaking stories from the kids he has profiled.

“When I talk to them their words shock my heart,” he says. “No one cares about their inner world.”

In most cases their grandparents are able to take care of physical needs like clothes and food but their psychological needs are neglected, he said.

In 2015, Ren met a 14-year-old boy, Li Guojun, whose mother had committed suicide. He didn’t know where his father was. “Cherish life in afterlife. My mom committed suicide after mom and dad argued. I miss her,” he wrote on the blackboard.

When Ren asked another boy what he wanted to say to his mother, the boy said he wanted to kill his mom with a knife because she left his dad while working away from the village but the vast majority of the messages are touching in their simplicity. 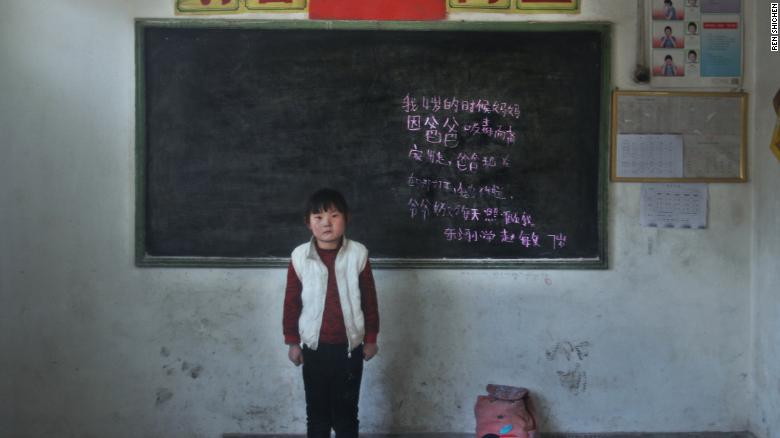 “Mommy left home because daddy takes drugs. Daddy is working outside now. But I don’t know where he is. Grandparents take care of me. Zhaomin, 7 years old, Donghe elementary school.

Clad in a turquoise coat, Wang Zixuan, 8, from Gaomiao Elementary School, Gansu, wrote: “I miss daddy and mommy. Daddy and mommy went out to work. I haven’t seen them for three years.”

Research suggests that left-behind children are at higher risk of abuse, suicide and mental health issues and suffer from more behavioral problems than their contemporaries.

In 2016, China released a set of guidelines aimed at protecting children left behind by parents, requiring rural officials to keep track of them, and urging parents to keep in touch via phone and video chat.

Left-behind children, and other unintended consequences of mass migration, are not unique to China, but draconian rules have made the problem worse. China’s much-hated hukou system registers families as either rural or urban.

Most migrants can’t change their household registration when they move. As such, they struggle to access social services such as public schools in urban areas. This can mean it makes more sense for parents to leave their children at home with grandparents or other relatives.

Ren says he feels that China has made progress in tackling poverty in rural areas and that living standards in the areas he visits are improving. There is also more focus on education for left-behind kids, he said. However, he added that these kids need much better psychological support.

“Even though now there are more ways of communicating — seeing each other on a computer screen, real love and care are still needed,” said Ren.

Ren, 42, grew up poor in Gansu, a dust bowl region that borders the Gobi desert. As a child he had to walk two kilometers (1.2 miles) every day to collect water. His first photography project focused on the plight of people living in three provinces in China where water is particularly scarce — Gansu, Shaanxi and Ningxia.

“I like to focus on ordinary people who live in villages, in rural areas,” he says. In his day job, he works as a photojournalist for Xibu Business Newspaper in Lanzhou, the provincial capital of Gansu.

Ren has started a blog in 2010, on which he posts pictures about life in rural villages. His blog has been viewed more than 17 million times and left-behind children is one of the most viewed topics.

“I want to use my pictures to tell Chinese stories”, he said.

He explained his blog is not only a platform to show the lives of children who have been left behind, but also a mutual channel for left-behind children to reach out to him so that more information can be gathered.