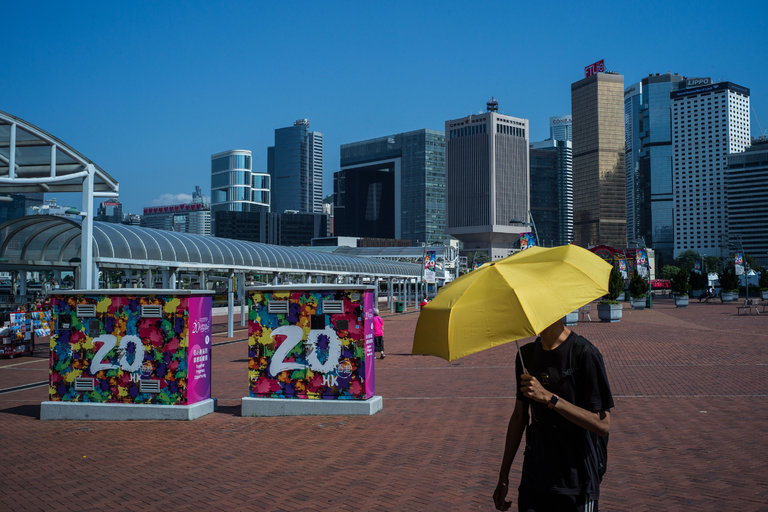 A lone yellow umbrella, the symbol of the Umbrella Movement in 2014, among placards last May marking the 20th anniversary of the return of Hong Kong to China. CreditLam Yik Fei for The New York Times

HONG KONG — One could say that long before 1997, the year that Britain handed Hong Kong back to China, the leaders of the city’s major pro-democracy parties had come to a tacit understanding with the Chinese government. The pan-dems, as these politicians are known here, would support the absorption of Hong Kong into a greater, unified Chinese state on the understanding that in time Beijing would grant Hong Kong genuine electoral democracy. That, at least, seemed to be the intention driving Hong Kong’s foundational legal text, the Basic Law.

Twenty years later, the Chinese government, apparently bolstered by its newfound wealth and might, seems to have reneged on these terms. Yet some pan-dem leaders — mostly those associated with the Democratic Party — have clung to their old position. Whether out of genuine patriotism or fear of reprisals from Beijing, they continue to support the view that China is Hong Kong’s rightful sovereign.

But is it? Other pro-democracy advocates, both forward-looking young people and older members of the intelligentsia, don’t think so — and are pointing to history as evidence.

Last month, during a forum at the Chinese University of Hong Kong, several academics discussed their research on Hong Kong’s relationship to the Chinese mainland. Comparing British colonial rule in Hong Kong (relatively enlightened, especially after World War II) to China’s proxy rule since 1997 (increasingly heavy-handed), these scholars lent credence to the unorthodox yet increasingly popular view that Hong Kong is faring no better politically — and in some ways may even be doing worse — than it was under the British. Conclusion: It would probably be better off on its own.

Tsui Sing-Yun, a physician-turned-historian, recently published (in Hong Kong and Taiwan only) a 456-page book entitled “The City-state of Anguish: The Origin and History of the Hong Kong People,” which argues that Hong Kong and China have few commonalities and different destinies. Hong Kongers, he says, are racially, culturally and linguistically distinct from the Han majority of northern China. And having been ruled from 1842 to 1997 by neither China’s Republicans nor its Communists but by the British, they have developed a separate religious, legal and political identity.

Such positions are provocative and, of course, highly controversial. “Hong Kong is not China” has become a favorite slogan of separatists here. And as this sentiment grows, the Chinese government and its local supporters repeat again and again that Hong Kong has been part of Chinese territory since ancient times.

Yet the historical record suggests a vastly different interpretation.

According to multiple ancient texts — notably “Huai Nan Zhi” (淮南子) and “Shi Ji” (史記) — Hong Kong was part of a much larger southern region, known today as Lingnan, that was first annexed to the Middle Kingdom through a series of brutal military conquests led by the infamous first emperor of the Qin dynasty, in the years 221-210 B.C. Ge Jianxiong, an historian at Fudan University, in Shanghai, has called these conquests unjustified wars of colonial subjugation waged by the Han people from central China against the non-Han peoples on its periphery.

Similar conquests were undertaken subsequently, culminating in Emperor Qianlong’s Ten Perfect Military Campaigns, which he completed in the late 18th century, at the zenith of the Qing dynasty. Yet for 2,000-plus years, Lingnan, except for a few of its urban areas, could not be effectively ruled by the Middle Kingdom authorities in their faraway capitals to the north. Instead, the region was mostly governed according to local customs by tribal chiefs whom the central authorities had vetted — an arrangement that looks like a prototype for both Britain’s rule of Hong Kong and the “one country, two systems” formula that governs the city’s relations with the mainland today.

Which is to say: However much China denounces Western countries’ colonial legacy, it, too, has a long past as an imperialist power, and Hong Kong’s life in the Chinese empire began as a spoil of bloody conquests, as a colony. The year of the handover from Britain, 1997, marked at least the third time that the city was subjected to the sovereignty of a central kingdom of China.

And Hong Kongers know colonialism when they see it.

Government leaders in both Beijing and Hong Kong, as well as the more clever Communist sympathizers here, are aware of this perception problem. It is one reason, for example, they want to revise the Chinese-history curriculum in Hong Kong schools in order to bring it in line with that on the mainland.

But doubling down on political brainwashing this way is unlikely to serve their cause. It was an attempt to promote this so-called patriotic education in Hong Kong in 2012 that sparked the student protest movement Scholarism, which later became part of the 2014 Umbrella Movement, which in turn helped spawn new political parties that today advocate varying degrees of self-determination.

Beijing’s recent efforts to get the Hong Kong government to punish expressions of disrespect for the Chinese national anthem also seem to be backfiring. In one school commencement ceremony after another, newly minted graduates have flouted the hymn, even at the risk of jeopardizing their job prospects in a market increasingly dominated by firms from the mainland. Scorn for the Chinese Communist Party is extending to symbols of the Chinese state.

Yet even as the political schism deepens between Beijing and Hong Kong separatists, the traditional pan-dems seem to be losing their power to mobilize protests. What would once have been hot-button issues now draw only thin crowds into the streets. When throughout the fall, a self-described “concerned group” backed by the major pan-dem parties called for various marches to oppose a plan to enforce Chinese immigration law at a new train terminal in Hong Kong, only a few hundred people participated.

This disconnect reveals a rift within the pro-democracy camp. All democrats here essentially hate the authoritarian Chinese government, its bullying and its meddling with Hong Kong’s autonomy. But they disagree over the nature of their own Chinese heritage, and Hong Kong’s.

The sociologist Chan Kin-man, a founder of Occupy Central — the precursor to the Umbrella Movement — told an interviewer this summer that if Chinese nationalism ever required him to “suppress the quest for democracy and freedom” for Hong Kong, he would “without hesitation commit treason.” By an honest reading of the city’s history, he would be blameless.