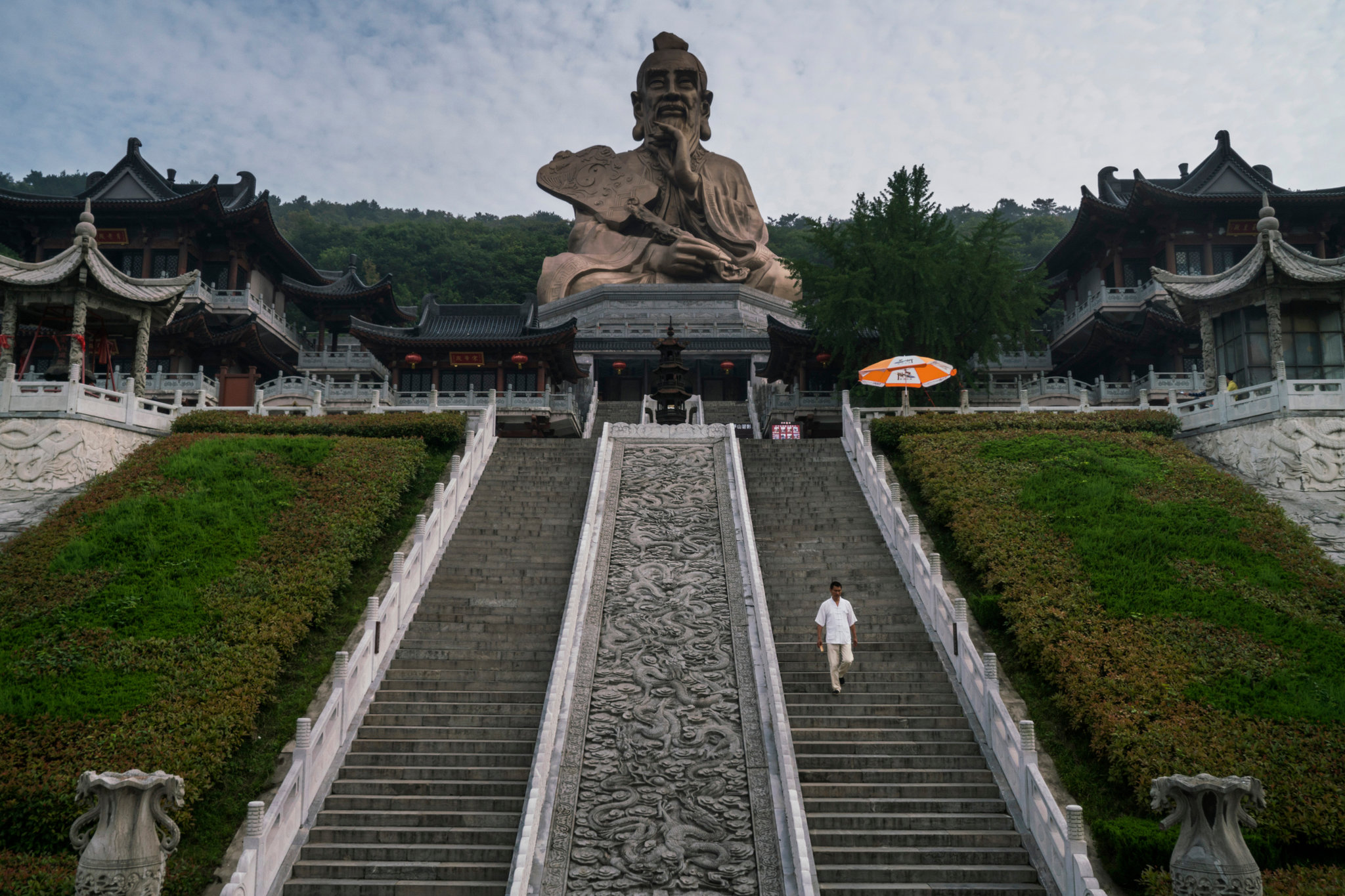 A statue of Lao-tzu, the founder of Taoism, at the new Mao Mountain temple complex near Nanjing, China. CreditAdam Dean for The New York Times

MAO MOUNTAIN, China — Far from the smog-belching power plants of nearby cities, on a hillside covered in solar panels and blossoming magnolias, Yang Shihua speaks of the need for a revolution.

Mr. Yang, the abbot of Mao Mountain, a sacred Taoist site in eastern China, has grown frustrated by indifference to a crippling pollution crisis that has left the land barren and the sky a haunting gray. So he has set out to spur action through religion, building a $17.7 million eco-friendly temple and citing 2,000-year-old texts to rail against waste and pollution.

“China doesn’t lack money — it lacks a reverence for the environment,” Abbot Yang said. “Our morals are in decline and our beliefs have been lost.”

Hundreds of millions of people in China have in recent years turned to religions like Taoism, Buddhism, Christianity and Islam, seeking a sense of purpose and an escape from China’s consumerist culture.

Spiritual leaders are invoking concepts like karma and sin in deriding the excesses of economic development. Religious followers are starting social service organizations to serve as watchdogs against polluters. Advocates are citing their faith to protest plans to build factories and power plants near their homes. 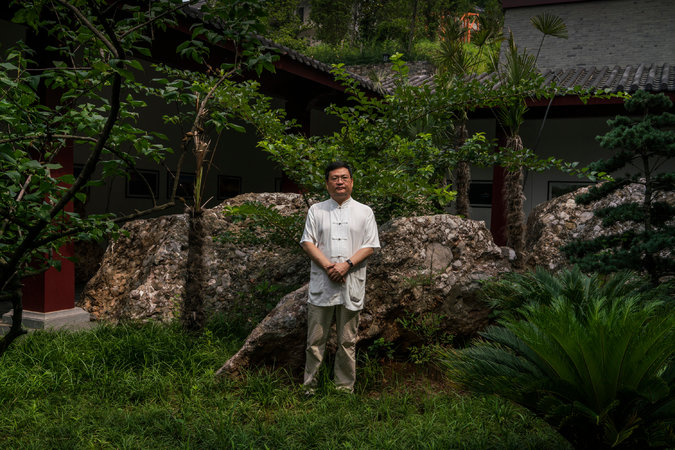 Yang Shihua, the abbot of Mao Mountain, said he had grown frustrated by what he sees as an indifference to a crippling pollution crisis. CreditAdam Dean for The New York Times

“Certainly it is a very powerful force,” said Martin Palmer, the secretary general of the Alliance of Religions and Conservation, a group that works with Chinese spiritual leaders. “People are asking, ‘How do you make sense of your life?’ An awful lot are looking for something bigger than themselves, and that is increasingly the environment.”

The Chinese government, which regulates worship and limits activism, has so far tolerated the rise of religious environmentalists.

President Xi Jinping has championed the study of Chinese traditions, including Taoism and Confucianism, in part to counter the influence of Western ideas in Chinese society. Mr. Xi, in articulating the so-called Chinese dream, has called for a return to China’s roots as an “ecological civilization” — a vision he has described as having “clear waters and green mountains” across the land.

Mao Mountain, with its stretches of untouched land, stands as a monument to nature. Chongxi Wanshou, Abbot Yang’s eco-friendly temple, opened in August 2016. Its 20 acres include an organic vegetable garden. Nearby is a giant statue of Lao-tzu, the founder of Taoism, who is worshiped here as a “green god.” Bees’ nests hang undisturbed, and signs remind passers-by that branches and trees are synonymous with life.

The mountain’s spiritual leaders say they are seeking to define a distinctly Chinese type of environmentalism, one that emphasizes harmony with nature instead of Western notions of “saving the earth.” 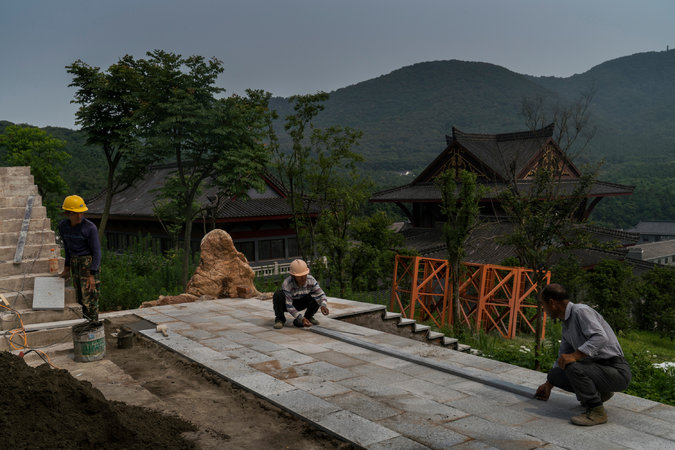 Workers building a patio at Mao Mountain in June. CreditAdam Dean for The New York Times

Xuan Jing, a Taoist monk with a black beard, said Western notions of the environment were focused on treating symptoms of a problem, not the underlying disease.

“You must cure the soul before you can cure the symptoms,” he said. “The root lies with human’s desires.”

Many spiritual leaders are also energized by what they see as an opportunity for China to become a global leader on environmental issues, with the United States showing new skepticism toward causes like combating climate change.

“We all live on earth together — we are not isolated,” Abbot Yang said in criticizing President Trump’s decision to withdraw from the Paris climate accord. “As Taoists, we have to work to influence people in China and overseas to take part in ecological protection.” 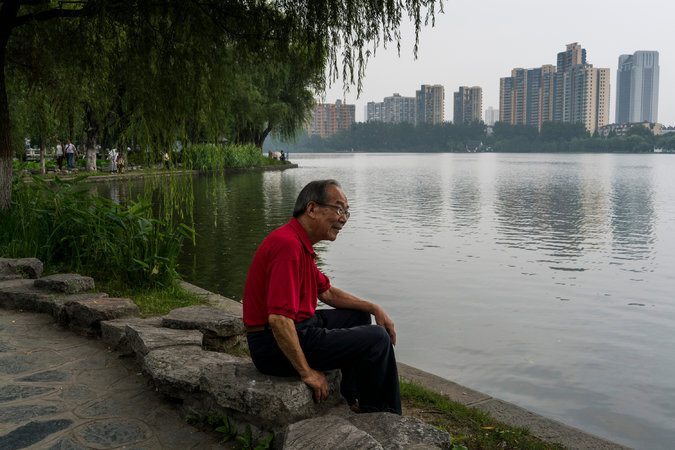 Li Yandong, a Buddhist who oversees a nonprofit group dedicated to cleaning up polluted lakes, in Nanjing last month. He sees parallels between his faith and protecting the environment. CreditAdam Dean for The New York Times

Environmentalism is infusing other religions in China as well, inspiring Buddhists, Christians and Muslims to take action.

In Nanjing, the capital of Jiangsu Province, about an hour from Mao Mountain, Li Yaodong, 77, a retired government worker and a Buddhist, is the founder of a nonprofit called Mochou, or “free of worries,” dedicated to cleaning up polluted lakes.

Mr. Li said that he saw parallels between his faith and protecting the environment. He leads by example, wearing secondhand clothes given to him by his children and collecting used staples to send back to factories.

Muslims and Christians are also speaking up on environmental issues, drawing on their faith to galvanize the masses. China is home to more than 60 million Christians and more than 20 million Muslims by some estimates. 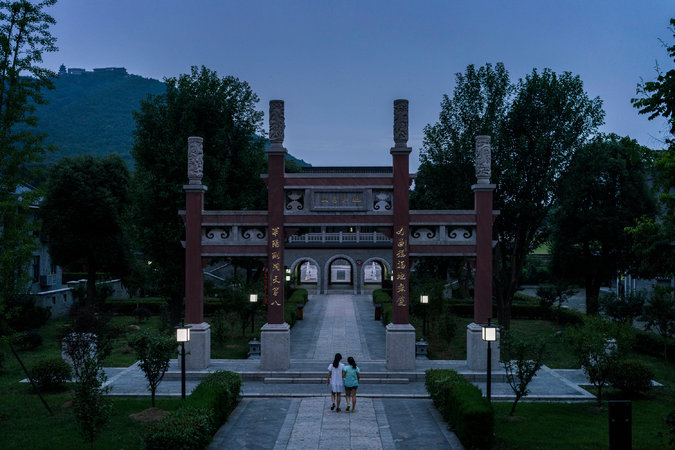 Mao Mountain, which opened in August 2016, has 20 acres of land, including an organic vegetable garden.CreditAdam Dean for The New York Times

Shen Zhanqing, a pastor who works for the Amity Foundation, a Christian charity, said many church members felt inspired by religion to help protect the environment. The foundation has held study groups on issues like reducing carbon emissions and climate change, and it encourages members to take buses to church.

“The decadence of human beings has destroyed the environment in China,” Pastor Shen said. “Our purpose is to protect God’s creation.”

At Mao Mountain, the monks gather each morning to read ancient texts and to write calligraphy next to the trees and stones. Hundreds of visitors climb the stairs each day to pay respect to Lao-tzu. To limit pollution, they are prohibited from burning more than three sticks of incense each.

Abbot Yang devotes much of his time to persuading local officials across China to set aside areas for natural protection, an unpopular idea in many parts. He has also worked to attract young, wealthy urbanites to Taoism. Many of them are eager for a spiritual cause and have responded warmly to Taoist leaders’ embrace of environmentalism.

Taoist officials have also spoken up at national leadership meetings in recent years, calling on the government to take more action to prevent environmental catastrophes.

The abbot acknowledged that it might seem strange for Taoists, who practice a philosophy of wu wei, or inaction, to be leading a call for change. Still, he said it was important to set an example.

“Taoism has almost 2,000 years of history — environmental protection isn’t new for us,” he said. “We have to take action.”