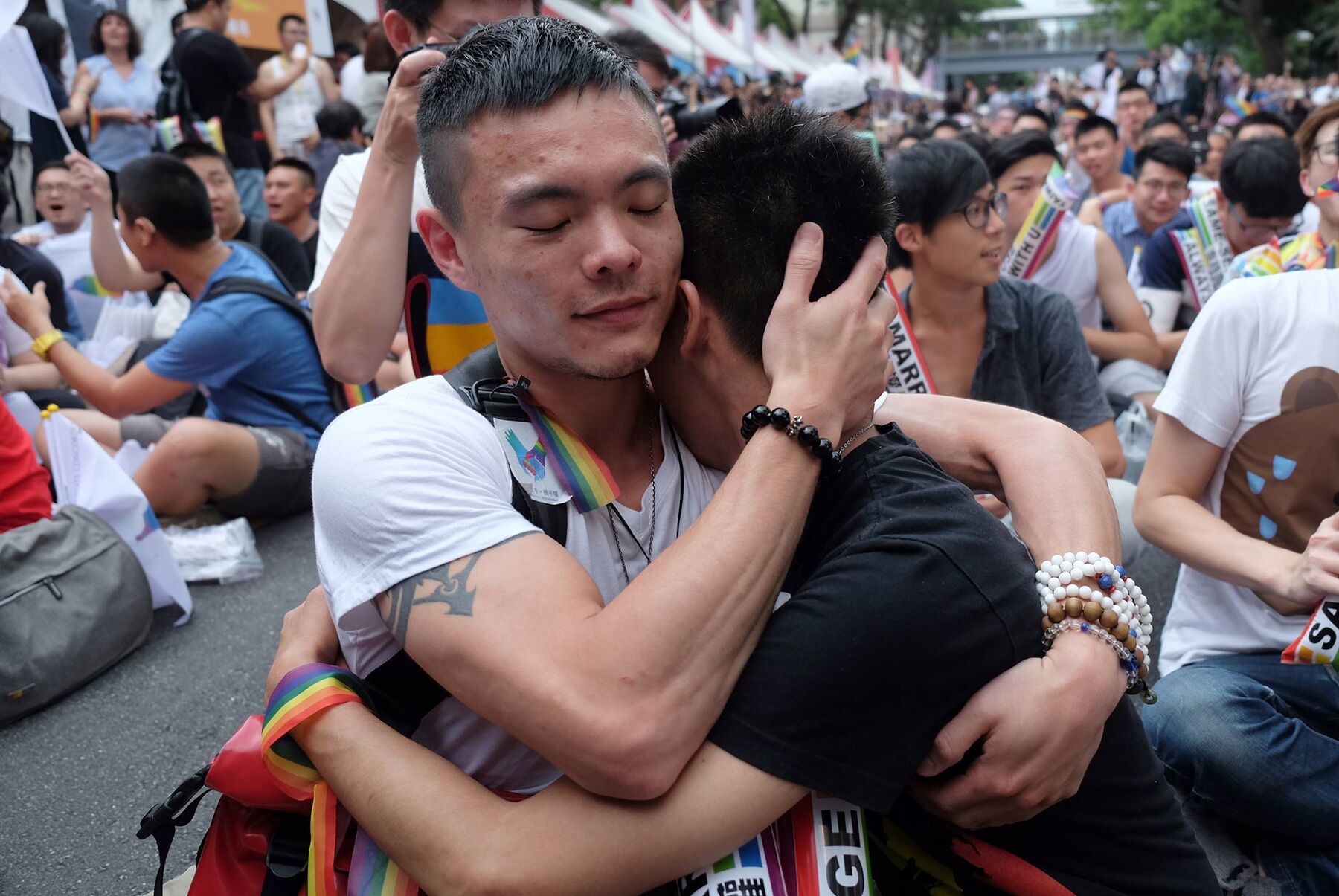 Same-sex activists hug outside the parliament in Taipei on May 24, as they celebrate the landmark decision paving the way for the island to become the first place in Asia to legalize gay marriage.Photographer: Sam Yeh/AFP via Getty Images

Taiwan’s historic court ruling this week did more than make it the first place in Asia to let same-sex couples wed: It also widened the political gap with China.

The decision by Taiwan’s constitutional court Wednesday to legalize gay marriage in two years — if lawmakers don’t do so first — underscored the differences between the democratic island and one-party China, which wants to unify the two sides. The Communist Party controls all branches of government and faces little public pressure to allow same-sex marriage.

“If we have the same culture and belong to the same race — what caused this difference?” said Li Yinhe, one of China’s leading authorities on sex and family issues and a long-time gay rights advocate. “It’s the system. This is a problem stemming from the system.

The ruling, which Taiwanese President Tsai Ing-wen quickly vowed to implement, undermines Chinese leader Xi Jinping’s appeals to shared culture when he’s made the case for peaceful reunification. While the former civil war foes share a common history, language and other customs, they risk drifting further apart as Taiwan deepens its embrace of democracy and civil liberties.

Although China has been relatively tolerant of homosexuality over the centuries, citizens have few venues to pressure the government to change a law that says marriage“must be based upon the complete willingness of both man and woman.” Protests are tightly restricted. Petitioning is controlled. Legislators, judges and media chiefs are appointed by the party and rarely challenge the leadership.

Efforts by gay marriage advocates to use China’s courts have been mixed. A district court in the capital Beijing ruled against using therapy to “correct” homosexuality in 2014, while one in the southern province of Hunan last year rejected a same-sex couple’s attempt to wed in the country’s first gay-marriage case.

Li, who has written more than 10 books about sexuality and lives with a transgender partner, has since 2002 submitted several proposals to China’s national legislature to revise the marriage law. She said the ruling undercuts arguments from opponents who say the change would be incompatible with Chinese culture and values.

“I believe it will encourage minority rights movement in the mainland,” Li said of Taiwan’s decision. “But it’s a long way to go to catch up.”

“We don’t think people in China are seeking different values than people in Taiwan,” Chung said. “It is the result of a different political system and democratic practices over the years.”

While Taiwan and the mainland have been ruled separately since 1949, the Communist Party continues to view the island as a lost province that must eventually be retaken, by force if necessary. The two sides have nonetheless forged extensive trade ties and enjoyed a political thaw over the past decade.

Those relations have recently been strained since Tsai — whose party officially seeks independence — won a landslide election victory last year on a pledge to reduce Taiwan’s reliance on the mainland. She has refused to endorse the “One China” framework for negotiations that dates back to 1992, spoke on the phone in December with then-incoming U.S. President Donald Trump and hosted an unprecedented ministerial-level delegation from Japan.

Kung Wen-chi, a lawmaker with the opposition Koumintang, disagreed that the marriage ruling would further widen the divide.

There’s also the possibility that Taiwan’s political shift prompts change in China. Jerome Cohen, a New York University School of Law professor who has been studying China’s legal system since the 1960s, said the “positive impact” of the gay marriage ruling “far outweighs” any damage to cross-strait relations.

“The more educated classes will appreciate not only the wisdom and fairness of the decision on the merits, but also the significance of the role of the judiciary in a genuine government-under-law country,” Cohen said. “Of course, the decision vividly highlights the sad contrast between Taiwan’s version of the rule of law, democracy and human rights and the mainland’s, which has become ever more repressive.”

Hudson Chen, 31, a security guard in Taipei, said Taiwan’s support for gay rights owes much to gender-equality education, which has been compulsory since 2004. Chen registered as a same-sex household earlier this month and is waiting to be legally married.

“We’ve been on different roads, and we must continue going our own way, not China’s way,” Chen said. “China’s gay community envies us a lot.”