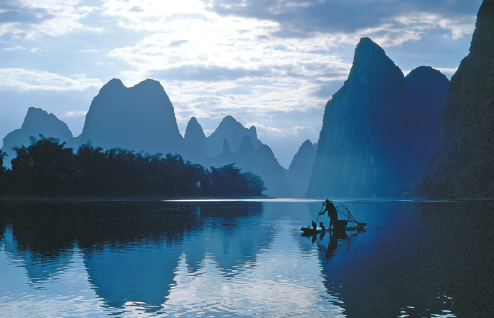 The classic way to enjoy the scenes along the Lijiang River is to ride a tourist barge from Guilin to Yangshuo. [Photo provided to China Daily]

The Lijiang’s iconicity in art is a relatively recent invention.

From a source high in the Mao’er Mountain the Lijiang River sweeps south toward Guilin and into the world’s imagination. Millions each year take to its waters, weaving between poetic peaks and submerged islands in search of scenery that arguably epitomizes Chinese landscape beauty. The Lijiang River scenery was even selected as a suitably phantasmagoric location for the Star Wars films.

In the world’s eyes, Guilin’s karst hills and jade waters are quintessential China. Images of Guilin’s iconic karst peaks dignify conference rooms and lobbies across China and grace China’s office at the United Nations and her embassy in Washington D.C. The use of the Lijiang River as an emblematic subject of Chinese landscape painting received the ultimate stamp of approval when it was pressed on the 20 yuan banknote.

Gregory Michiels, a Belgian photographer who now calls Guilin his home, says the distinctiveness of Guilin lies in “the uniqueness and the endless rhythms of the karst hills. The sea of clouds sunrise with the karst hills sticking through the clouds is magical. The scene of cormorant fishermen with the karst hills as background takes you back to ancient times.”

When former US President Bill Clinton visited Guilin he observed, “Nowhere is like Guilin. It makes me think of the traditional Chinese paintings.” As Clinton’s remark suggests, our conceptions of Chinese landscape beauty are shaped by the ancient aesthetics of Chinese shanshui painting, that has its roots in the fifth century. Shanshui paintings have defined structural principles and typically depict landscapes using a brush and ink, rather than paints. Mountains, rivers and waterfalls are popular subjects, particularly mountains, which are sacred in Taoist culture.

Like many apparently venerable traditions, Guilin’s figuration as the emblem of Chinese landscape painting is actually a recent invention. In the greatest age of Chinese shanshui art, from the Five Dynasties and Ten Kingdoms (907-960) to the Northern Song (960-1127), its major inspiration was the gently rolling landscapes of southeast China, where Dong Yuan and Ju Ran painted soft hills and rivers with rubbed brushwork. Meanwhile a rival northern school of artists like Fan Kuan and Guo Xi used ink wash, starkblack lines and sharp dotted brush strokes to evoke rough-hewed northern mountains.

At this time Guilin was known as a remote, contested space on the wild western edges of empire. Bleeding into a politically fluid Yunnan to the west, the area was dominated by non-Han tribes, including the majority Zhuang. The first artist to paint the Guilin landscape is held to be Mi Fu (1051-1107), sometimes called the father of “Chinese impressionism”. Mi Fu used different ink shades, and large dots applied with a flat brush to render slowly flowing landscapes of rivers and clouds. His pioneering abstract style made him disliked at the Northern Song (960-1127) court. Although he was a native of Shanxi, in around 1070-1075, 20 year-old Mi Fu worked as a military senior official in Guilin. Many experts belief that Guilin’s misty landscapes had a great influence on his artistic evolution.

The use of the Lijiang River as an emblematic subject of Chinese landscape painting received the ultimate stamp of approval when it was pressed on the 20 yuan banknote. [Photo provided to China Daily]

The first Guilin native to inscribe the history scroll of Chinese painting was Shi Tao, who was probably born in 1642 in the still-extant Jingjiang Prince’s Palace in Guilin. After his father was killed in armed rebellion in 1645, Shi Tao left Guilin forever. Although he is not known to have painted Guilin landscapes, his memories of home clearly influenced his works, which inspired generations of subsequent Guilin artists.

From the 18th century, an emergent Guilin art scene was dominated by three families; the Zhou, Li and Luo. Zhou Weigeng, known as the father of Guangxi landscape painters, created a new landscape method using ocher ink ax techniques. Li Xiyuan, Zhou’s son-in-law, followed Zhou’s techniques and devoted his life to landscape painting. In 1837, a journey to Wuchang along the Lijiang River and Xiangjiang River inspired a 35-work River Painting series, with each creation incorporating a poem. Li Xiyuan’s son Li Jishou kept the family tradition going and their Chongshan village was renowned as a creative hotspot.

The Luo Family were equally respected for their artistic endeavors. Luo Cunli traveled widely to find creative patronage from lords and nobles. His son Luo Chen – known as “best at painting, calligraphy and poems in Guilin” – built a house on the bank of Rong Hu where he quickly rustled up a set of 33 paintings of Guilin scenery.

Like so much of modern China’s iconography – her flag, her anthem, her martyrs’ pantheon – Guilin’s reputation as the symbol of national landscapes hails from the first half of the twentieth century. This was a time when many prominent artists visited Guangxi. In 1905 Qi Baishi spent nearly half a year in Guilin creating masterpieces like Solitary Beauty Peak and Lijiang River Rafting. He summarized Guilin’s scenery as “peaks, banks and fishing”. Later, in 1936, another renowned master, Xu Beihong, came to Guilin and opened a new path in Chinese painting with his renderings of the misty rain of the Li River. Xu’s innovations included giving up traditional line texturing methods for a splash ink method, and he also used clear reflections to enhance the water texture.

The really significant moment for Guilin’s reputation was during the War of Resistance Against Japanese Aggression (1937-45) when waves of émigré Chinese landscape artists, fleeing from war torn regions, washed up there. As well as Xu Beihong, other greats like Guan Shanyue, Zhang Daqian and Huang Binhong beat a path to Guangxi. Guan Shanyue arrived in October 1940 and created famous landscape works such as Lijiang River Hundred Li painting which portrays the whole length of the river from Guilin’s Lijiang River Bridge along to Yangshuo.

It was after this formative period that the creative compass of Chinese landscape painting really spun from the southeast of China to Guilin. This development gave new impetus to local artists and encouraged the emergence of the Lijiang River Painting School, whose formative figures include Tu Ke. Since the 1980s a group of Guangxi painters led by Huang Gesheng have focused on the scenery of the Lijiang River and southern Guangxi.

The author is a Hong Kong-based writer, translator and publisher. Guilin: China’s Masterpiece, a comprehensive guide to Guilin’s scenery and culture, is out now from Make-Do Publishing.