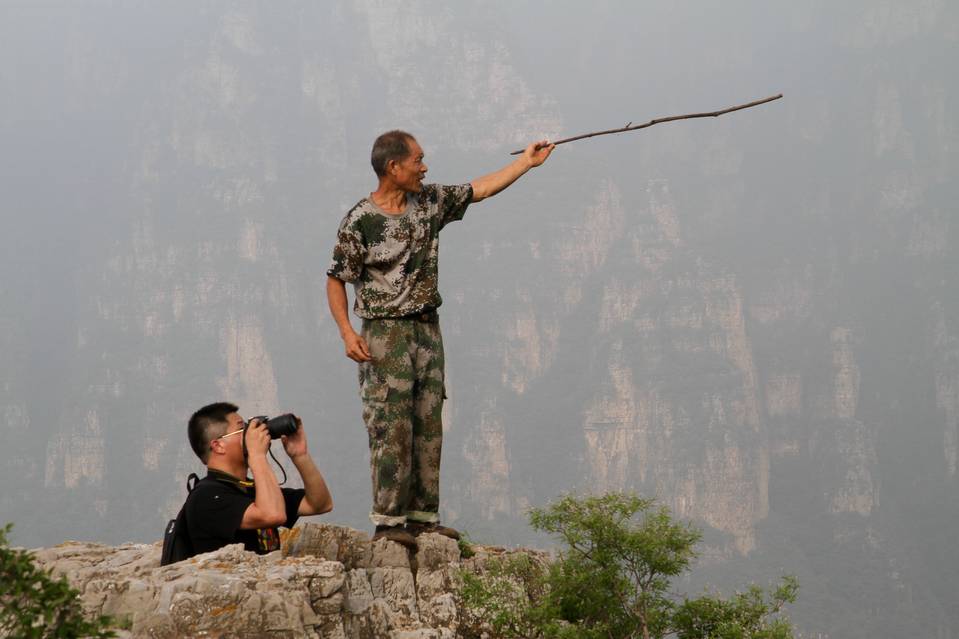 ENLARGE Hong Zhenkuai, left, stands with a local guide on a granite cliff on northern China’s Langya Mountain that five Chinese soldiers are said to have jumped from in 1941 to avoid being captured alive by Japanese troops. PHOTO: JOSH CHIN/THE WALL STREET JOURNAL

A Chinese writer has been ordered to apologize publicly for questioning one of China’s best-known stories of wartime heroism after he lost an appeal in a Beijing court.

In a decision that fell on the anniversary of Japan’s surrender at the end of World War II, the Beijing No. 2 Intermediate People’s Court on Monday upheld a libel ruling against the writer, Hong Zhenkuai, for a pair of articles he wrote in 2013 questioning certain details in the “Five Heroes of Langya Mountain.”

The story, featured in elementary school textbooks, tells of a quintet of Chinese soldiers who lured Japanese forces up a mountain to save their battalion and nearby villagers. As the story goes, the five then smashed their weapons and jumped from a cliff to avoid being captured alive; two were snagged by tree branches on the way down and survived.

In an earlier decision against Mr. Hong in June, Beijing Xicheng District Court said the writer had “engaged in specious speculation, questioning and criticism” on the basis of insufficient evidence, damaging the soldiers’ “heroic image and spiritual value” in the process.

In his appeal, Mr. Hong challenged the lower court’s argument that he shouldn’t dispute the validity of the story in part because it is so well known and “constitutes part of the collective memory of the Chinese nation.”

The court rejected that challenge, according to a copy of the decision posted online by the plaintiff’s lawyer and confirmed by Mr. Hong. It also rejected Mr. Hong’s argument that he was exercising his rights to free speech and free academic inquiry, saying he should have “fully contemplated the possible social impact his research might unleash.”

“With the appeal, the court has issued a judgement based on its own conjecture about my motivations,” Mr. Hong said. “This is a new literary inquisition.”

The court did not respond to requests for comment.

The legal skirmish over Mr. Hong’s articles sits at the center of intensifying battle in China over the right to question the Communist Party’s telling of the past. Scholars and media affiliated with Communist Party portray the fight as an effort to vanquish what they call “historical nihilism” — Western-influenced skepticism that they say aims to negate the party’s contributions to China’s progress.

The lawsuit was filed a year ago on behalf of the surviving soldiers’ descendants by a retired People’s Liberation Army officer named Wang Lihua. Mr. Wang and the descendants’ lawyer, Zhao Xiaolu, announced the lawsuit at a press conference at the Diaoyutai State Guesthouse in Beijing.

According to a transcript posted online, a general in attendance issued a call for “friends in the legal world” to ensure the court protected the heroes’ reputations. In a later videotaped speech, Mr. Wang said the same general had telephoned judicial officials to tell them a ruling in Mr. Hong’s favor would be anti-military.

Messrs. Wang and Zhao declined repeated requests for comment. In an instant message prior to the appeal, Mr. Wang said Mr. Hong was “out of control and arrogant” and “shooting himself in the foot.”

Mr. Hong said he became interested in the story after reading news reports about an Internet user in the southern province of Guangdong who was detained by police for reposting a message from a web forum that speculated the three dead soldiers had been shot by enemy troops. After digging into the history himself, Mr. Hong started to develop doubts of his own. Chiefly, they concern:

Mr. Hong said he has never met the survivors’ descendants, who did not attend pre-trial meetings. The writer said neither he nor his lawyers went to court to listen to the appeal judgment, “because it was a foregone conclusion.”

The court ordered Mr. Hong to immediately cease impugning the reputations of the five heroes and demanded he take out advertisements in court-approved media apologizing to the plaintiffs.

Even so, Mr. Hong isn’t giving up. He said he’s planning to sue a number of nationalist intellectuals who he says have slandered him in the course of writing about his lawsuit.

Mr. Hong conceded his chances of success were also slim. “But I want to see how they use today’s law to justify their lies — to leave a record for history,” he said.