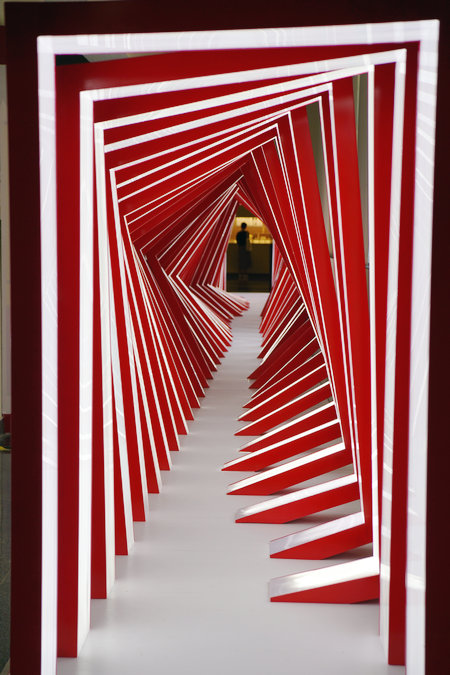 The 30-meter-long passage leading to the main exhibition is set to engage viewers in a journey of “soul searching”. [Photo provided to China Daily]

Cui Xiuwen was playing hopscotch as a child in one of her dreams. She also saw the many phases of her life－evolving from a newborn to a little girl and then an artist.

That dream is the inspiration behind Cui’s ongoing exhibition, Light, at Peking University’s Arthur M. Sackler Museum of Art and Archaeology. She has created several installations that take viewers on a journey through life, similar to how one progresses while playing a children’s game.

The 46-year-old lives in Beijing and is considered a leading contemporary Chinese artist for embracing a feminine perspective in her figurative paintings and vanguard video works. Her recent creations, though, have become more abstract, engaging a broader scope of thinking in terms of religion and philosophy.

At her current show, Cui arranges the works in four sections, each exploring one dimension of a person’s existence: physical being, heart, soul and destiny. She adopts a simple color scheme using such colors as red, green, yellow and blue, which she believes encapsulate enormous energies that enrich the vision of humans.

The installation Body at the museum’s entrance invites people to become a part of the work. One can sit, lean or lie down on the colored cubes that are made of foam rubble and wrapped in flannel of varying sizes. 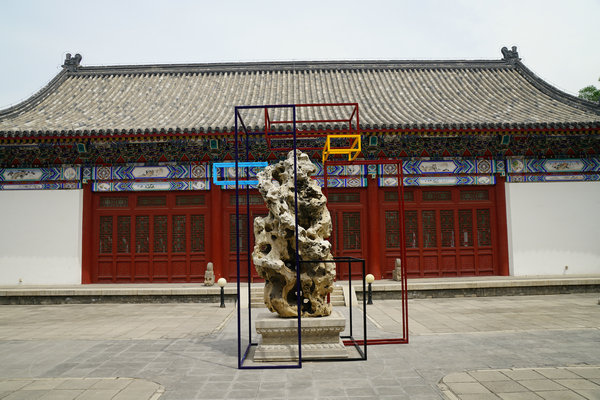 Proceeding to the museum’s courtyard, visitors can see at the center a huge Taihu stone, a type of rock with holes that was widely used in classical Chinese gardens as a symbol of Taoism. The rock is said to date to the Northern Song Dynasty (960-1127) and now is part of a permanent display at the same museum.

Cui encircles the rock with several cubic metal frames, by which she suggests an infusion of Chinese and Western cultures.

She says the beautiful rock, representing the tradition of Chinese art, is at the heart of her work that she also calls Heart. The frames symbolize Western contemporary art that has been introduced to Chinese artists since the 1980s.

“Such encounters between the past and present, East and West, tangible and intangible are opening the minds of artists of my generation,” she says.

The main exhibition hall behind the Taihu stone displays Cui’s other interactive installations, which produce effects of light and seek to engage viewers in a process of “soul searching”.

People can walk through a 30-meter-long passage filled with artificial light, with dozens of luminous red frames twisted in varying angles. 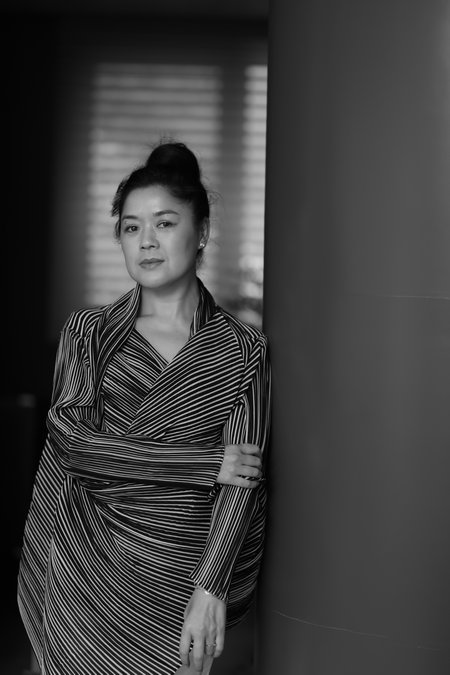 In two dark rooms set up in the same hall, images of colorful blocks are projected on the ground. When visitors hop on the blocks, the blocks disappear, giving the feeling that “you’re falling from somewhere into a hole of darkness”, Cui says.

The exhibition is presented by the Jillian Sackler international artists project. It was launched in 2013 by Jillian Sackler, widow of Arthur M. Sackler, an American physician and collector, who proposed and sponsored the building of the Sackler museum. The project brings to the venue an artist’ solo exhibition every year, shedding light on cultural communication from individual perspectives.

Miguel A. Benavides, the exhibition curator from the United States, says that, like the project’s previous participants, Cui has drawn on personal experiences to create touching works that “talk to each other” and showcase her understanding of Chinese traditions against a modern background.

Explaining her shift from figurative to abstract Zen-like way of creating, Cui says she has been reading a lot on religion and philosophy. She also meditates daily, a practice that has helped her review her works in a calmer, comprehensive manner.

“Reading the books has opened a door on the path of my life. It sometimes shuts and reopens when I’m awakened by more reading,” she says. “In the process, my life has been scaled up bit by bit.”