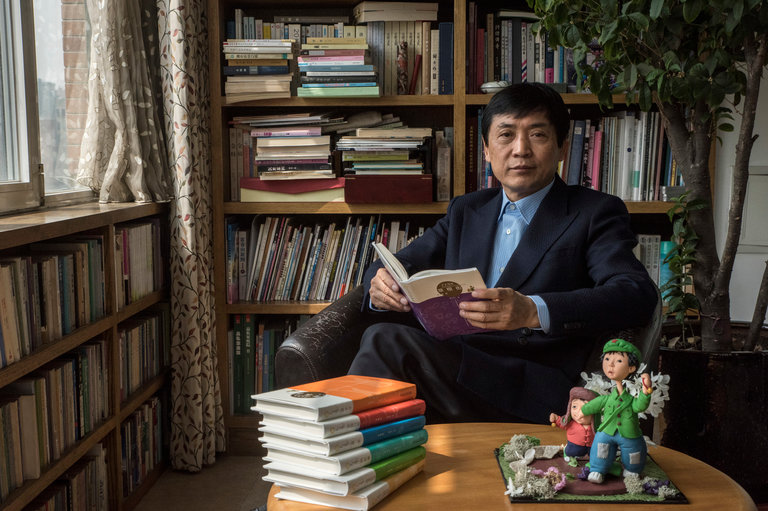 The author Cao Wenxuan at his home in Beijing. CreditGilles Sabrie for The New York Times

BEIJING — Sunshine and playtime are not the hallmarks of Cao Wenxuan’s stories for children. Instead, there are mass starvation and displacement, flooding, plagues of locusts, and mental and physical disabilities.

Yet Mr. Cao, 62, is among the most beloved writers in China. Last month, he became the first Chinese author to receive the Hans Christian Andersen Award, regarded as the most distinguished international honor for children’s literature. He shared the prize, handed out every other year, with the German illustrator Rotraut Susanne Berner.

“Cao Wenxuan’s books don’t lie about the human condition,” the International Board on Books for Young People said in announcing the award. “They acknowledge that life can often be tragic and that children can suffer.”

At the core of Mr. Cao’s stories are his experiences growing up in the eastern coastal province of Jiangsu in the 1950s and ’60s, an era of social upheaval and political tumult throughout China. 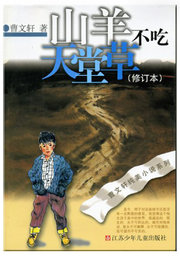 One recent morning in his spacious, book-lined apartment in the Haidian district here, he said his memories of those experiences continued to be his greatest asset.

“China has given us so many heartbreaking stories,” he said. “How can you avoid writing about them? I can’t sacrifice my life experience in order to make children happy.”

In his own childhood, he said, there was not much homegrown children’s literature. In China then, the concept of literature for children was relatively new, dating to the early 20th century, when translated stories by foreign children’s authors began to appear along with vernacular children’s works like the fairy tale “The Scarecrow” by Ye Shengtao and “Letters to Young Readers” by Bingxin.

Through his father, an elementary school principal, Mr. Cao said, he read some of those stories, as well as Soviet children’s literature and Chinese modern literature. He says Lu Xun, a leading writer and social critic, had the greatest influence on him.

As Mr. Cao approached adolescence, political tensions in China were escalating, culminating in the Cultural Revolution of 1966-76. Schools were closed for several years. 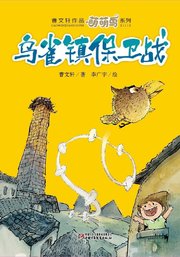 The young Mr. Cao traveled the country as part of the dachuanlian, a movement in which young activists were encouraged to meet and spread the message of revolution. But as the student groups known as the Red Guards rampaged, wreaking havoc on the lives of intellectuals, officials and others, Mr. Cao said he was one of many students who held back.

“All we did was wear red armbands and write dazibao,” he added, referring to the “big-character posters” that spread political messages during the period.

Before long, though, Mr. Cao returned to Jiangsu and resumed his classes. As part of the larger upheaval, some of the top Chinese language and literature teachers in nearby Suzhou and Wuxi had been sent to work at his rural school.

As a result, he said, “The Cultural Revolution years were the best education I received.”

Later, as the movement was winding down, he enrolled at Peking University, where he is now a professor of Chinese language and literature. He published his first short story for children in the late 1970s and has not stopped writing since. By his own count, his publications number more than 100 works: novels, academic texts, short stories, essay collections and picture books.

The chaotic years of the Cultural Revolution form the backdrop for many of his stories. His 2005 book “Bronze and Sunflower,” for example, concerns the friendship of a girl, Sunflower, who follows her father from the city to the countryside, where he has been sent to do hard labor, and Bronze, a boy unable to speak whose parents are impoverished villagers. 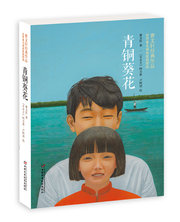 “The children went to school as usual, and read their books as usual, but the beautiful rise and fall of their voices as they read out loud got weaker and weaker until they were no longer capable of reading aloud,” reads one passage in the English translation by Helen Wang. “People were worried. They were sweating with anxiety. When the hunger was at its worst, they thought about gnawing on stones.”

Mr. Cao insists that the Cultural Revolution is “merely a setting, not the main subject” of his books. Still, some say his straightforward descriptions of life then are needed now more than ever. In schools today, children are taught only officially approved versions of what, for many of their parents and grandparents, was an intensely formative and frequently traumatic time.

“So much history from that period has been distorted, which is why it’s important for children to know about the past,” said Wu Qing, a retired professor in Beijing who was a jury member selecting the Andersen award. “Cao writes about this period with humanity, and he doesn’t include any political slogans. He writes from his own experience.”

Today, children’s literature is a large and extremely profitable industry in China. Mr. Cao and other prominent children’s authors, like Yang Hongying and Shen Shixi, have benefited from the rapid expansion of the middle class and a growing obsession with children’s education.

Mr. Cao’s novel “The Grass House,” for example, is estimated to have sold over 10 million copies in China. Four of the top 10 richest Chinese authors last year wrote literature for children or young people, according to the newspaper China Daily. 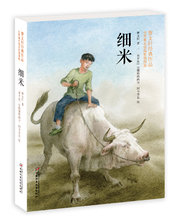 Although Mr. Cao has won several important prizes at home, his work has not been without controversy. Among other things, he has been criticized for promoting outdated gender stereotypes: Boys in his stories are often bigger and stronger, and girls are weaker and more prone to tears.

Mr. Cao was quick to dismiss the criticism. “It’s the same in Western children’s literature,” he said.

But as he has grown older and more experienced, he said, he has become firmer in his belief that, above all, children’s literature should provide “a good foundation for humanity and a correct and accurate moral outlook.”

That is why, he said, he will continue to write about growing up in China during the Mao years, even if that time feels far away to many children.

“The world is always changing,” he said. “Fashion trends change from day to day, but the fact of people wearing clothes doesn’t change.”

“That’s what I’m interested in, the continuity,” he added. “It doesn’t matter what the setting is; universal values and humanity always show through.”