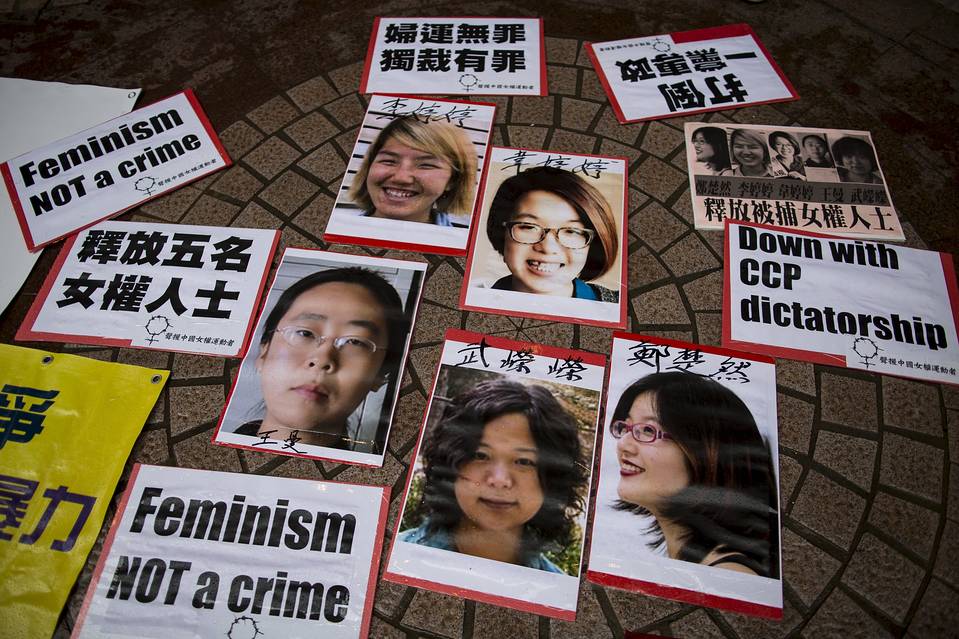 Liang Xiaojun, another of the activists’ lawyer, said the five had been released on China’s equivalent of bail, meaning they would be subject to police surveillance and could still be vulnerable to criminal charges for up to a year.

“They are not completely free. At any time in the next year, the police could take them away again,” Mr. Liang said.

“The releases are a profound relief, and they make clear that public pressure from inside and outside China can change the government’s position,” said Sophie Richardson, the director of Asia advocacy at Human Rights Watch. Still, she added, the women shouldn’t have been detained in the first place.

The detention came as the Communist Party pursued an aggressive campaign against independent political activities, detaining or jailing dozens of lawyers, activists and others. But even against that background, the detentions baffled many inside China. Gender equality has been a central plank in the Communist Party’s platform since its inception, with Mao famously declaring that “women hold up half the sky.”

Activists note that the country recently has made progress on women’s issues, with a landmark law on domestic violence scheduled to come out later this year.

The last time a Chinese regime arrested women for feminist activity was in 1913, according to feminist Chinese historians, when then-President Yuan Shikai attempted to crush a nascent women’s suffrage movement.

Prosecutors faced a deadline Monday to either charge or release the five women, who were detained while planning a multicity campaign against sexual harassment on public transportation timed to coincide with International Women’s Day.

Mr. Wang, the lawyer for Ms. Wei, said earlier that police had requested that prosecutors charge the five with “gathering a crowd to disturb public order.” Mr. Wang said police had opened investigations into some of the activists’ prior campaigns.

Beijing police and prosecutors didn’t respond to requests for comment. The Haidian District Detention Center, where the women had been held, declined to comment, saying it would only answer questions posed in person by relatives.

U.S. Secretary of State John Kerry issued a statement Friday calling for the release of the women, a few days after his predecessor, Hillary Clinton, called their detention “inexcusable” in a post on Twitter. Mr. Kerry said the U.S. supported the efforts of the activists to fight sexual harassment, adding, “Chinese authorities should also support them, not silence them.”

At a daily news briefing Monday, Foreign Ministry spokesman Hong Lei said China had complained to the U.S. over the comments made by U.S. leaders, and urged the U.S. to “stop interfering in China’s domestic affairs.”

On Saturday, relatives released a public letter asking the government to release the women. “Given our country’s outstanding historical tradition, the social reality of sexual harassment, and the relevant laws and regulations, we firmly believe that the thoughts and actions of our five relatives did not in any way violate national policy or laws,” the letter read.

Human rights and civil society experts noted that the detained activists had been successful in drawing attention to women’s issues with eye-catching campaigns, such as one in 2012 where they “occupied” men’s toilets to highlight insufficient facilities for women. The women also had worked with foreign organizations—something the Communist Party increasingly finds suspicious.

China’s authorities “want gender equality to be something they control,” said Lu Jun, director of the Beijing Yirenping Center, an antidiscrimination nonprofit that employed Ms. Li, one of the detained activists. “They don’t want civil society to have anything to do with it.”

Government pressure has cast a chill over many women’s-rights activities in recent weeks. Nonprofit groups associated with the detained women have had their offices searched by police, while a number of lectures and activities have either been canceled or altered, women’s-rights campaigners say.

Rehearsals for a production of “Our Vaginas, Ourselves,” a play about female empowerment based on the “Vagina Monologues” by American playwright Eve Ensler, have been put on hold as the cast searches for a new space to meet, according to one of the show’s creators, who said she had been among a group of activists who had been briefly detained along with the five but quickly let go.

“Right now it’s not clear if we’ll be able to put on any shows in Beijing this year,” she said.

Mr. Lu said all of Yirenping’s gender-related programs had been temporarily suspended as the group waited to see what happened to the women.

Even after their release, it remained unclear what long-term effect the recent pressure would have on the women’s-rights movement.

“For some people, there will definitely be a chilling effect,” said Feng Yuan, a veteran women’s-rights campaigner, but for many young people, perceived suppression could serve as “a rallying point.”

For one 24-year-old activist, the detentions served as an awakening. She said she saw police bring home one of the detained activists, Ms. Zheng, only to take her away again. The sight left her speechless, she said.

After Chinese authorities began searching for associates of the detained activists, she found herself moving from apartment to apartment. “I got a call from someone and just ran,” she said.

Being on the run hasn’t kept her from continuing her activism. She joined four other activists in Guangzhou to don masks of the detained women and take photos around the city as part of a campaign to focus attention on them.

“I’m so happy I’m crying,” she said on hearing that Ms. Zheng had been released. Still, she said, they might keep the masks around, “just for fun.”

—Kersten Zhang contributed to this article.