Are you ready to geek-out at 4-H Camp Tech?! Join us for this overnight program from June 13-15 on the OSU campus in Columbus where you’ll learn coding, robotics, engineering design and more. This camp is open to youth entering grades 6,7 or 8 in fall 2018. Camp Tech is based at the Nationwide & Ohio Farm Bureau 4-H Center with overnight accommodations in an OSU. Dorm. Find the details at 4-H Camp Tech!

For more information, please review the informational flyer! What a great idea for a club social all while supporting Ohio 4-H! Want to get a head start on those holiday craft projects? JOANN Fabrics has partnered with the National 4-H Council to bring more hands-on 4-H programs to youth. Current members, parents and volunteers can sign-up for the JOANN 4-H Rewards Card and receive 15% off total in-store and online purchases. JOANN will give a minimum of 2.5% of every eligible transaction to support 4-H programs. Find the details at http://www.joann.com/4-h/ 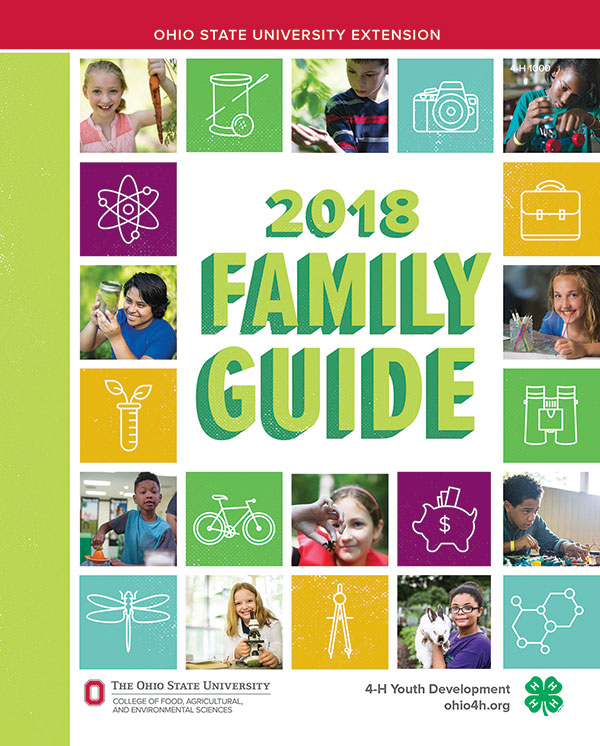 Have you ever wondered what projects are available through the Marion County 4-H program? Or, do you know a 4-H member looking to try something new? We’ve got something for everyone!

Each project book contains information and activities for members to explore as an organized group project or at home under the guidance of a parent or interested adult. When choosing a project, consider your interests, background, what is necessary to start the project, and the resources available to help you complete it.

To download your own copy, visit https://ohio4h.org/familyguide for more information. Paper copies will be available at request at the Marion County Extension Office beginning Oct. 30.

The Texas 4-H Program has been receiving requests from across the country on how to help Texas during their time of need. Below is the information just released on a campaign to support local and county 4-H Programs who have been hit by the massive storm. Please share.

The deadline to order is this coming Sunday, September 3.
http://bit.ly/2wisk8a

Applications for the 2018 Youth in Action Awards opened August 1! This important program gives youth the chance to share their stories of how 4‑H has changed their lives and how they have made a difference in their communities. Click here to download the application guidelines.

More information can be found at http://4-h.org/about/blog/2018-4-h-youth-in-action-awards-share-your-story/.

Over 11,800 4-H alum show support through Raise your Hand

COLUMBUS, Ohio (7-11-2017) — Ohio 4-H announced its award of $20,000 for participation in Raise Your Hand, a national 4-H initiative asking the millions of 4‑H alumni across the nation, including 4-H alums in Ohio, to ‘Raise Your Hand’ and pay it forward in support of providing the hands-on learning that empowers kids across America.

4-H, the largest youth development program in the nation, called on alumni to raise their hands to help bring 4-H to 10 million youth by 2025. Currently 4-H empowers nearly six million young people in every county across America, including 183,000 4-H’ers in Ohio.

“We are delighted that in the national campaign to connect with millions of 4-H alumni, our Ohio 4-H alums led the way to a first place finish,” said Cathann A. Kress, vice president for agricultural administration and dean of the College of Food, Agricultural, and Environmental Sciences at The Ohio State University. “When the hands were counted, the Buckeye State accounted for about one-fifth of the participants.

“Best of all, raising your hand meant paying it forward for the next generation and our 4-H youth programs will benefit from the $20,000 award. Thanks to all our great alumni for, once again, making us 4-H and Buckeye proud!”

“Whether they’re running Fortune 100 companies, performing to sold-out crowds, leading community programs or volunteering to empower local youth, 4‑H alumni are the epitome of true leadership,” said Jennifer Sirangelo, president and CEO, National 4‑H Council. “Our remarkable alumni truly showed their support ensuring the next generation has the opportunity to benefit from the 4‑H experience.”

“4-H gives kids the opportunity to learn by doing, to grow from not only the encouragements brought by success, but also through challenges and failures, as these skills will help them to handle whatever life may throw their way,” explains Jennifer Nettles, Grammy-award winning musician, actress and 4‑H national spokesperson.

The fourth H in 4-H stands for Health and we pledge our Health to better living. Healthy Living is also one of the mission mandates of 4-H, with nutrition and fitness as two of the core areas that 4-H programs strive to address. On Saturday March 6, thanks to an Ohio 4-H Foundation Grant, and utilizing the Eastern Brown High School food lab, a group of 16 4-H’ers in Brown County did just that at the C.H.E.F. Day Camp. C.H.E.F. (Cultivating Healthy Eating Fanatics) provides a hands-on experience in the kitchen.

Though food and nutrition was the focus of the day, the day started by discussing the importance of physical activity and reducing our stress. Theresa Ferrari, an OSU Extension Specialist for Healthy Living with the Ohio 4-H program, opened the discussion on physical activity and then led the youth on a short 4-H yoga routine.

The rest of the morning was spent covering safe food handling, nutrition guidelines, budgeting, and meal planning. Youth were split into small groups and charged with planning a menu for the day including breakfast, lunch, dinner and a snack with two requirements: meeting the MyPlate guidelines set by USDA and using a budget of $30 for a family of four. Christi Rockey, 4-H Volunteer and OSF Foods Department Superintendent, covered portion sizes using measurements, but also how to estimate portion sizes with your hands. “Teaching them to judge portion sizes with their hands gives them a tool they can use anywhere” said Rockey. “Most restaurant portions are easily three to four times what is recommended.”

After menus were planned, groups then had to select lunch or dinner to cook. They were given a meal budget of $15, a Kroger sales ad, and a list of provided pantry items to further aid in planning their meal. Following lunch and an overview of what to look for in the grocery store, participants boarded a bus and went to Kroger. Upon arrival, manager Brent Wilson met with the youth, who were armed with their shopping lists, and gave them a quick introduction to the store and Kroger in general.

Participants then shopped in small groups to gather all the supplies they needed. After checking out and being over budget, 14-year-old Caitlyn Wills said “I learned how to read a label; you have to look at the total price, not just per pound.” Wills’ team had to regroup and adjust their menu to a different cut of meat to reduce their budget. Another group quickly learned the importance of using their store loyalty card; they went from being $6 over budget, to under budget, after a visit to the customer service desk.

Before leaving Kroger, Wilson met with the group again to ask about their experience. Not to miss an opportunity, Wilson also told them to remember that when they turn 16 he is hiring. When asked what skills he was looking for in employees, Wilson said “A smile; I can teach other things, but I can’t teach you to smile.”

Upon returning to the school, the group covered proper table settings and watched a video on knife skills. The highlight of the day followed with the C.H.E.F. cooking showdown. Participants were given 45 minutes to cook their meals. Menus included chicken salad with pasta and alfredo sauce, rosemary pork chops with asparagus and pickled peppers, chicken cordon bacon, and several variations on fruit smoothies. Jarrett Ingle, 15, was a part of the group who attempted pork chops. Ingle said, “I learned I have to work on my time management, my pork chops weren’t done on time. I also learned to make sure I am clear at the meat counter when ordering, these were bigger than I thought!”

After cooking was, of course, the chance to sample all the great dishes. Groups received feedback about taste, presentation, portion size, and adherence to MyPlate recommendations. Ferrari told the youth they could cook for her anytime. The participants were challenged to try foods from other groups, even if they didn’t think they would like the options. Ferrari said, “Sometimes you don’t know if you like something until you try it, and part of getting kids to eat healthy is exposing them to different foods.”

After sampling, the participants got a crash course in Dishes 101 before cleaning up the kitchen. Rockey said, “You eat, you clean!” Parents were starting to arrive as this lesson was taking place, and laughed as they said now they can’t claim they don’t know how to do dishes.

At the end of the day, all the participants were asked to share about their experience. Cayden Wills, 9, was most excited about the fact that he “learned how to use a knife.” One of the oldest participants shared, “I actually cooked something. I had never done anything more than microwave before.” All of the participants said they felt they could cook at least part of a meal in the future.

“Tying all of these skills together from planning a budget and good nutrition, success at the grocery and the reality of preparation and cleanup has become a lost art. C.H.E.F is a chance to acquire those Family and Consumer Science skills that these youth will need throughout their adulthood,” said Rockey.

C.H.E.F. was made possible by a grant from the Ohio 4-H Foundation, Brown County 4-H Committee, and Eastern Brown High School.