Reflecting on the Reichstag

Initially, we chose to blog about the Reichstag because of its unique appearance as a government building as well as the rich history of Berlin that this building represents. We first saw the Reichstag building on our tour of the Spree River. It appeared to be rather modern featuring a glass dome, yet it also had older architectural elements, which date back to the 19th century. As we continued along the Spree River we noticed memorials for the people who lost their lives while entering the Spree River during the Cold War (see picture below). When children fell in the river they were unable to be saved since they were entering the East section; additionally, many people tried to flee the East by swimming across the Spree. This reminds us of the time period during the Cold War when the Reichstag was unable to be the government building for the West, not only because it was attacked during the Second World War but also because they were not allowed to have their seat of government in Berlin. 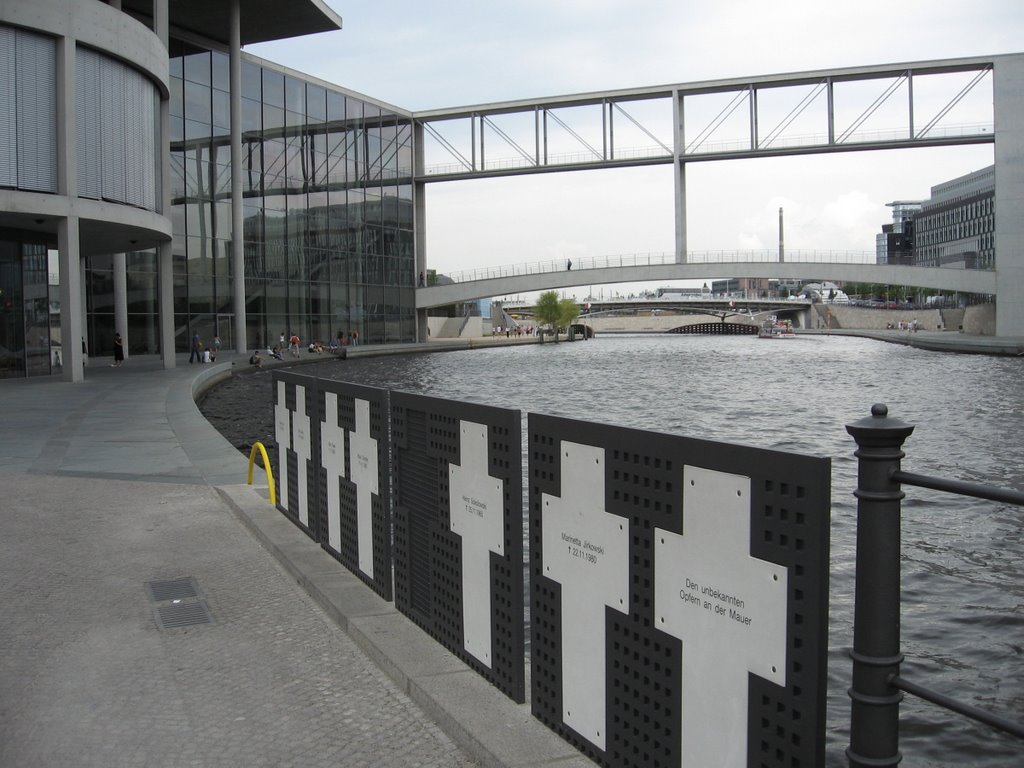 A few weeks into our trip we visited the Reichstag and we had a wonderful opportunity to tour the plenary chamber, the reflection and prayer room, and the Archive of German Members of Parliament.  We even touched the handle that leads to Merkel’s office. During the trip we saw graffiti that the Soviet troops left when they captured the Reichstag and the city of Berlin. One particular piece that stood out was a love symbol that a soldier left for his partner. He is still with that woman today. The display of the graffiti left by the Soviet soldiers signifies Berlin’s acceptance of its history as well as artistically combining its past with its present. Another art piece that we noticed was a large pillar with a screen that constantly shows the words of famous government speeches. In the basement we saw the tunnel that was believed to have aided in the burning of the Reichstag in 1933. Hitler used the burning of the building as propaganda, claiming that is was the communists who burned the building. Nevertheless, the cause of the burning remains a mystery. We concluded our tour in the Reichstag dome where we could walk around the dome with an audio guide and hear about Berlin’s rich history and famous sites while viewing the entire city.

Sites Near the Reichstag

Something that is truly fascinating about the Reichstag is the history of the area surrounding it. For example, the Tiergarten and Brandenburg Gate are very close to the Reichstag. Both of these locations date back to a time when royalty ruled the area. As a matter of fact, the Tiergarten was originally used as a hunting ground for the Elector of Brandenburg, and later Friedrich the Great turned the area into a public garden. The Brandenburg Gate also represents the time of Prussian rule. Furthermore, the Brandenburg Gate reminds us of the time when Berlin was separated between the East and West; however, today it is a symbol of unity and a famous tourist attraction. Visiting this area is highly recommended because you can experience the rich history of this country simply by visiting such a small area. The area around the Reichstag will take you on a trip from Prussia to Parliament in a matter of a few hours. Also, I would highly recommend taking a boat tour on the Spree River. It is very beautiful and informational.

In order to fully understand the structure and function of Germany’s Reichstag Building, we will compare and contrast this building with the United States Capitol Building, a landmark that is well-known to all American citizens.

There are various similarities between these two buildings, particularly regarding the architecture and the use of the space inside the buildings. First off, both buildings have a prominent architectural feature that can be seen from the exterior – a dome. Both buildings are very recognizable to tourists and locals because of their dome, which is the tallest part of each of the government buildings. However, the domes differ significantly both structurally and visually: the Reichstag’s dome is newly constructed and made of glass, whereas the US Capitol’s dome is over 150 years old and made of cast iron. In addition, both buildings are similar because grand pillars are a very prominent feature of the front of each of the buildings. Furthermore, parts of the Reichstag’s exterior are sprayed with bullet holes from the Battle of Berlin, which still remain today as a reminder of the evils Germany overcame. On the contrary, the US Capitol Building has no exterior bullet holes and remains in near perfect condition. Pictured below is an overall visual comparison of the exterior architecture of each building.

There are also a couple similarities and differences in the interior architecture of the two buildings. For example, the Plenary Chamber of the Reichstag Building is very similar to the House Chamber of the US Capitol Building. Both areas have similar seating arrangements for their members of parliament or congress in which they have unassigned seats arranged in a semicircle on tiered platforms facing the front of the room. I find it interesting that the representative bodies in the US and Germany both have unassigned seats because it encourages members to arrive to work early if they want a good seat for the day’s meeting. The interior of the buildings are different, however, in that the Reichstag has various modern art projects such as the Archive of German Members of Parliament, whereas the Capitol Building focuses more on the aesthetically pleasing architecture and design of grand rotundas and chandeliers (pictured below to the right of the Archive of German Members of Parliament).

Aside from architecture and design, these two landmarks have many similarities regarding the use of the space inside. First of all, it is pretty obvious by now that both the Reichstag and the United States Capitol Building serve the purpose of housing their representative bodies – the Bundestag in Germany and Congress (House of Representatives and Senate) in the United States. However, the composition of each nation’s parliament or congress differs in that they are made of different political parties. In the United States, the House of Representatives consists only of two parties in which there are 246 Republicans and 188 Democrats. On the other hand, the Bundestag consists of many different parties. Currently, there are 311 seats occupied by the Christian Democratic Union, 193 by the Social Democratic Party of Germany, 64 by the Left Party, and 63 by the Alliance 90 and The Greens. I feel that a diverse parliament such as Germany’s is very important for a country because it offers opposing viewpoints so that all the parties are more inclined to work together to find solutions to their problems, whereas in the US House of Representatives, there is too much arguing between the two parties and not many successful compromises.

In conclusion, the Reichstag Building, although similar to the US Capitol Building in some ways, is a unique landmark with a rich history and an important current function. It is undeniably one of the most historically significant government buildings in the entire world.