Part 2 of this weeks outlook series is a discussion on corn used for feed during the 2019/20 marketing year. Again a big thank you to Rachel Leggett and Rob Leeds.

OSU Extension is pleased to be offering the third session of “Farm Office Live” session on Monday evening, April 27, 2020 from 8:00 to 9:30 p.m.  Farmers, educators, and ag industry professionals are invited to log-on for the latest updates on the issues impact our farm economy.

The session will begin with the Farm Office Team answering questions asked over the past week.  Topics to be highlighted include:

Plenty of time has been allotted for questions and answers from attendees. Each office session is limited to 500 people and if you miss the on-line office hours, the session recording can be accessed at farmoffice.osu.edu the following day.  Participants can pre-register or join in on Monday evening at  https://go.osu.edu/farmofficelive

Howdy folks- here is my market update for the week of April 17 on the potential for US soybean crush moving forward. Soybean crush has been the star of the show lately and the March report was eye popping, but it is hard to see soybean crush sustaining that pace. Although, I do think the 20 million bushel increase in the USDA April report is justified. Demand challenges moving forward- likely mean we won't see another crush report like what we saw in March for a while. The written report for the video can be found here- [https://u.osu.edu/ohioagmanager/](https://u.osu.edu/ohioagmanager/)Big thanks to Rachel Leggett and Rob Leeds for the video. Have a great week and hope to see you around the State of Ohio soon! FSA released their first set of 2019 county-level acreage data on August 1 (see Crop Acreage Data of FSA).  This data indicated that there were 85.9 million acres of corn planted in the United States, down by 1% from the 2018 plantings of 86.4 million acres (see Table 1) 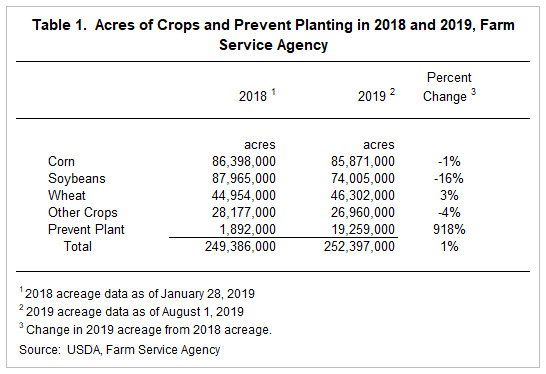 See a summary of the forecasts in the table U.S. farm sector financial indicators, 2011-2018F, or see all data tables on farm income and wealth statistics.

[In the text below, year-to-year changes in the major aggregate components of farm income are discussed only in nominaldollars unless the direction of the change is reversed when looking at the component in inflation-adjusted dollars.]

END_OF_DOCUMENT_TOKEN_TO_BE_REPLACED OK, While many of us feel that this picture represents how harvest has gone so far, we are not really that far behind.  The most recent Ohio Crop Weather report issued on October 9 shows corn harvest at 21%.  At this time last year we had harvested 12% of our corn while the most recent 5-year average is 17%.

Soybeans are lagging behind just a bit.  This report shows Ohio bean harvest at 30%.  This compares to 42% last year and a 5-year average of 36%.

So why do we feel we are so far behind?  Probably because we started sooner this year and have received just enough rain to prevent us from running beans many days this year.  Early reports that I am hearing have soybean yields much better than last year and good corn yields as well.

See the full report below. Record corn and soybean yields are forecast in Ohio, according to Cheryl Turner, State Statistician, USDA, NASS, Great Lakes Region. This report is based on conditions as of September 1, 2018. Some highlights of the Crop Production Report follow:

by: Scott Irwin, Department of Agricultural and Consumer Economics
University of Illinois

In the Crop Production report released on October 10, 2017 the USDA estimated the U.S. average yield of corn to be 171.8 bushels per acre and the average yield of soybeans to be 49.5 bushels per acre. The October yield estimates confirmed that U.S. corn and soybean yields in 2017 would be rather large by historical standards. The estimated corn and soybean yields for 2017 are the second largest ever for the U.S. The “high” yield estimates released by the USDA since August have surprised many market observers and analysts based on the perception that crop condition ratings and weather during the 2017 growing season did not support an expectation of such large yields. The purpose of this article is to examine whether those perceptions were accurate or not. …Continue Reading…