“Will I be liable for that?” is a common question we hear in the legal world.  COVID-19 has made that question even more commonplace, especially as more businesses reopen or expand services and more people reengage in public activities.  About a dozen states have acted on the liability concern and passed COVID-19 liability protections, and Congress is also deliberating whether federal legislation is necessary.  Here in Ohio, the House and the Senate have been reviewing separate immunity proposals.  Yesterday, Ohio’s House passed its bill, which aims to limit liability in certain situations where a person claims harm from the transmission of COVID-19.

The language of House Bill 606 effectively explains the House’s intent in putting forth its proposal, stating that:

The House bill declares that for the above reasons, any COVID-19 “orders and recommendations from the Executive Branch, from counties and local municipalities, from boards of health and other agencies, and from any federal government agency, do not create any new legal duties for purposes of tort liability.”

The bill’s reference to not establishing a legal duty in regards to COVID-19 is important, as it forms the basis of immunity from liability for COVID-19 infections.  Under Ohio law, a person who can prove that harm resulted because another failed to meet a required duty of care can make a successful claim of negligence and receive damages for harm caused.  Negating a legal duty of care for handling of COVID-19 removes the possibility of civil liability.

END_OF_DOCUMENT_TOKEN_TO_BE_REPLACED Our attention now turns to the summer growing season and what is in store. Some things are different this summer.

The latest climate outlooks are available at: https://www.cpc.ncep.noaa.gov/ Join OSU Extension’s Ben Brown and Dianne Shoemaker for a webinar  on “Navigating Direct Support for Ohio’s Farmers and Ranchers” on Wednesday, May 27, 2020 at 9:30 am with special guest, Ohio Farm Service Agency Director Leonard Hubert.  This webinar is generously produced and distributed by Ohio Ag Net. 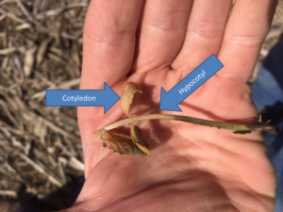 Assessing your fields. It is best to assess damage to plants or seeds 48 to 96 hours after the drop in temperatures, as symptoms may take a few days to appear. Additionally, cold temperatures slow GDD accumulation and may further delay crop emergence. For corn, recent work suggests 50% emergence can be expected following accumulation of 130-170 soil GDDs (using soil temperature to calculate GDD rather than air temperatures) from planting, which may take 5-7 days to accumulate under normal weather conditions. The additional details on CFAP eligibility, payment limitations, payment rates, and enrollment timeline arrived on May 19, 2020, when the USDA issued its Final Rule for CFAP.  In this article, we explain the Final Rule in this issue of News from the Farm Office.

Starting Tuesday, May 26, 2020, producers can contact their local FSA office and begin to sign up for CFAP.  This bulletin serves as the authors’ interpretations of the Final Rule released by USDA, and FSA interpretation may be different.

OSU Extension and Ohio FSA will conduct a webinar in the upcoming days to outline program materials and answer questions. For information about the webinar and additional information on CFAP, please visit farmoffice.osu.edu.

The month-long rally in the Choice Boxed Beef Cutout Value (BBCV) peaked at $475.39 per cwt on May 12 last week according to the USDA National Daily Boxed Beef Cutout Report. By Friday, the BBCV was $434.32. This report includes daily negotiated prices and volume of boxed beef cuts delivered within 0-21 days using average industry cutting yields.

END_OF_DOCUMENT_TOKEN_TO_BE_REPLACED

There is one pasture project that never seems to go away. That is controlling the multiflora rose. The plant was first introduced into the United States in 1866 to be used as a rootstock for grafting roses. About 70 years later the U.S. Soil Conservation Service promoted the use of multiflora rose as a “living fence” and a means of erosion control. The adaptability of this plant allowed it to get out of control. Over the years this plant has made the list of noxious weeds in many states and is taking over many pastures in this part of the country. The battle to gain control is difficult and maintenance is continual.