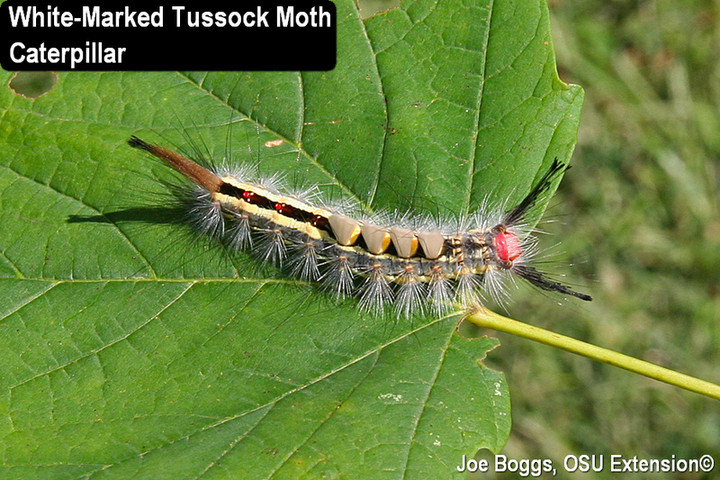 Heavy localized populations of white-marked tussock moth (Orgyia leucostigma) caterpillars are being reported in central and western Ohio.  Curtis Young (OSU Extension, Van Wert County) showed images during this week’s BYGL Zoom Inservice of caterpillars on a variety of hosts including rose and noted he had received reports of hot spots in Allen, Hancock, and Putnam Counties.  I received a report from Franklin County of 100% defoliation of a landscape redbud.

Although this native moth has the potential to produce widespread outbreaks in Ohio, the reports we’ve received thus far this season fit with its usual behavior.  Most often high populations are extremely localized; sometimes confined to a single landscape.  Such outbreaks are almost invariably single-season events with no repeat performances the following season.

However, white-mark tussock moths have at least two generations per season and we’ve only experienced first generation caterpillars.  So, there’s more to come. 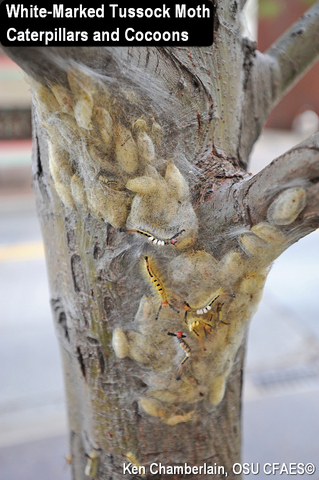 Early instar caterpillars feed as leaf skeletonizers and older caterpillars consume the entire leaf leaving behind the larger veins.  High populations have been known to completely defoliate small trees in less than a week.

Mature trees can recover from heavy single-season defoliation.  However, trees that are under stress due to poor site conditions or newly planted trees can suffer health debilitating damage.

Thankfully, there are many natural enemies of this native moth including predators, parasitoids, and pathogens.  Indeed, there is a naturally occurring strain of nucleopolyhedrovirus that is specific to white-marked tussock caterpillars and is known to cause rapid collapses of outbreak populations including first-generation caterpillars.

However, if there appears to be no natural help with suppressing the current first generation caterpillars on newly planted trees, they can be controlled using a range of topical insecticides including pyrethroids (synthetic), pyrethrums (naturally occurring), or spinosad products.  Early instar second generation caterpillars can be killed with products that are based on the naturally occurring bacterium, Bacillus thuringiensis var. kurstaki (Btk); however, Btk only kills small caterpillars. 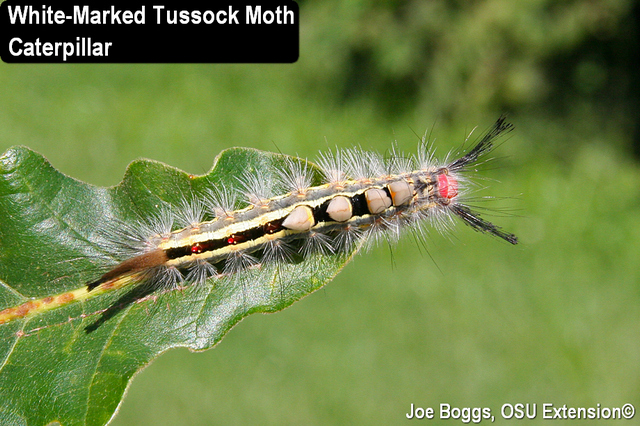 Like other tussock moths (family Erebidae, subfamily Lymantriinae), white-marked tussock moth caterpillars have urticating hairs (stinging hairs).  The hairs are not attached to venom glands like the hairs and bristles on more dangerous caterpillars.  However, they can puncture the skin causing hives and skin rashes on individuals who are highly sensitive to the irritation. 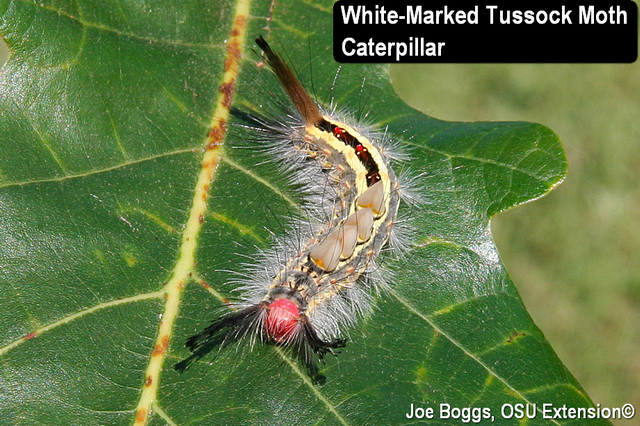 A Near Look-a-Like Tussock 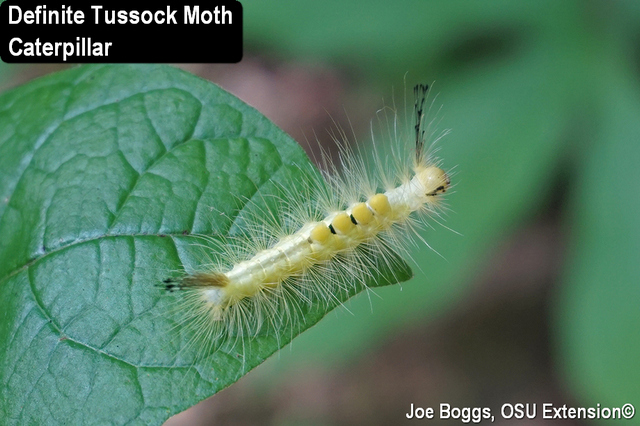