Originally posted on Buckeye Yard and Garden onLine- May 18, 2019 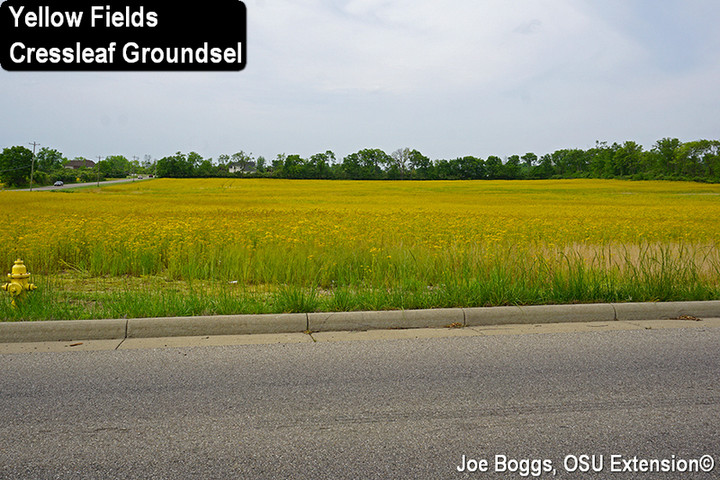 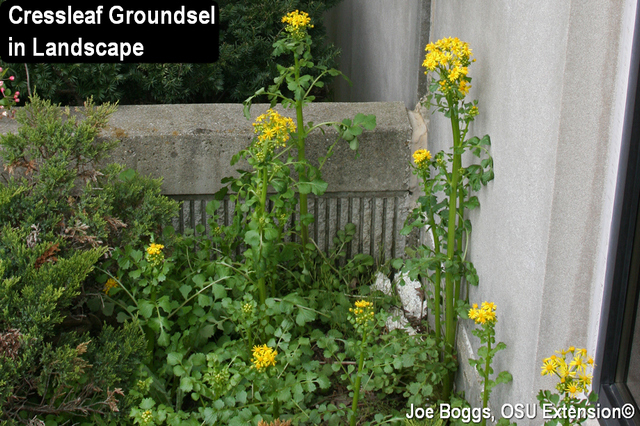 Cressleaf groundsel is so-named because its lower leaves resemble watercress.  Its alternate common name of butterweed comes from its conspicuous buttery yellow flowers. 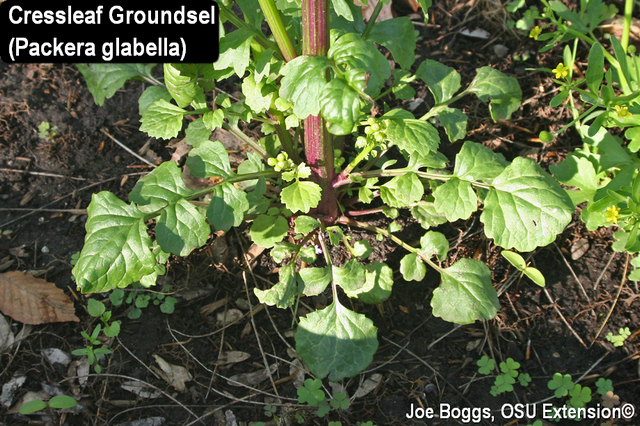 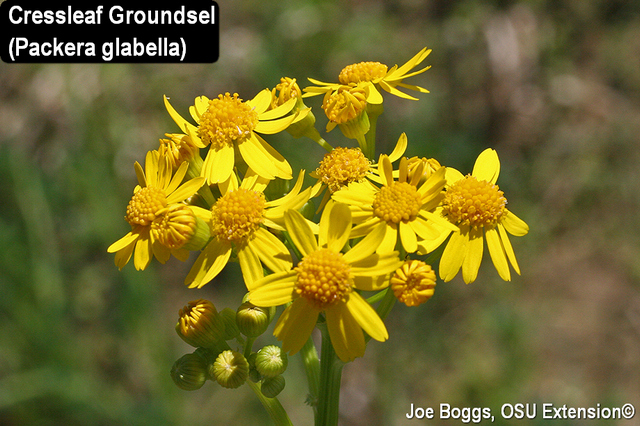 Cressleaf goundsel is a winter annual meaning that seeds germinate in late summer to early fall.  Members of this sneaky group of weeds grow throughout the winter and flower in the spring.  Winter annuals aren’t much of a problem for farmers who plow in the spring because entire plants are plowed under.  However, cressleaf groundsel growing in hay fields is a different matter. 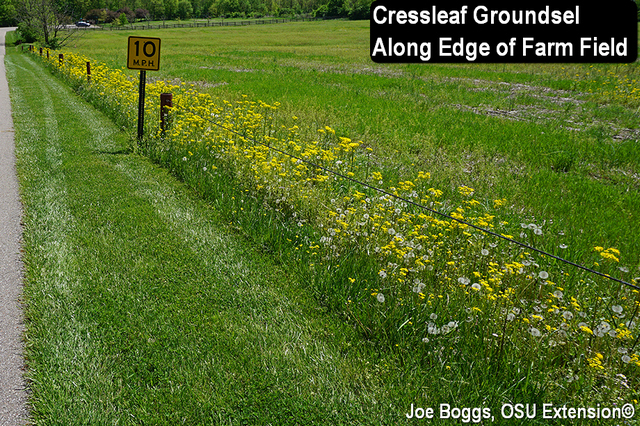 The leaves, stems, flowers, and seeds contain pyrrolizidine alkaloids that can cause liver damage if consumed by livestock.  The resulting chronic disease is called “seneciosis” from the alternate name for the genus.  Normally, livestock will avoid eating cressleaf groundsel; however, they may accidentally ingest dried plants if the plants or plant parts are harvested with hay.

A close look at the golden-yellow cressleaf groundsel clearly shows why it’s a member of the aster family (Asteraceae).  Each flower has a central composite cluster of disc flowers surrounded by up to 15 florets radiating like a star.  Indeed, “aster” comes from the Greek name for “star.” 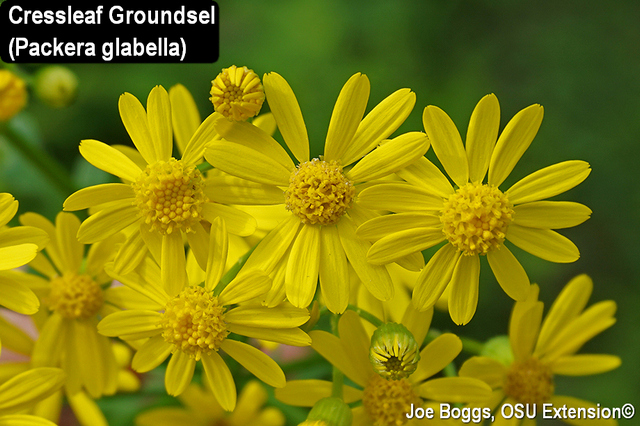 The flowers are borne at the ends of thick, erect, deeply ridged green stems that are sometimes streaked in reddish-purple.  Seedheads look like miniature dandelion puff-balls which is no accident; dandelions (Taraxacum spp.) also belong to the aster family. 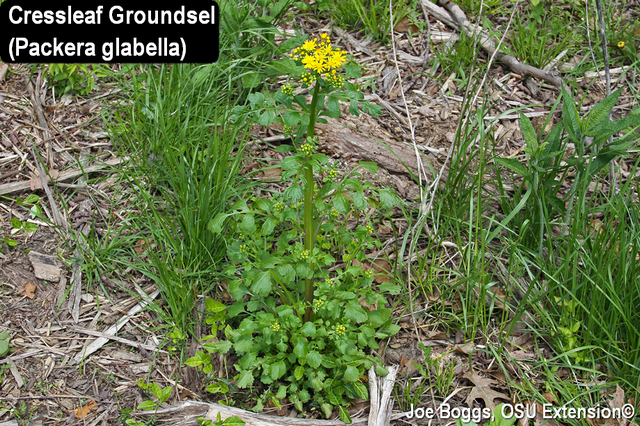 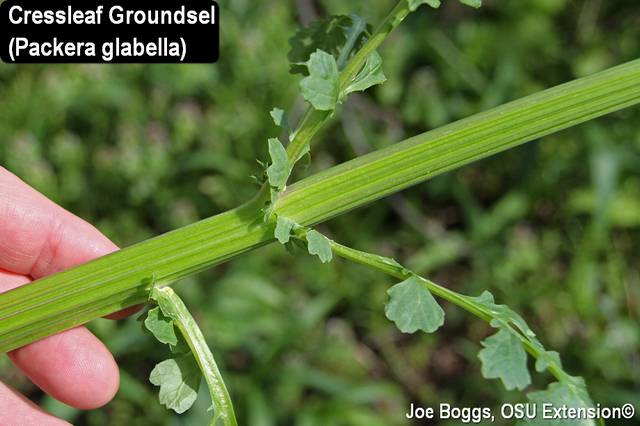 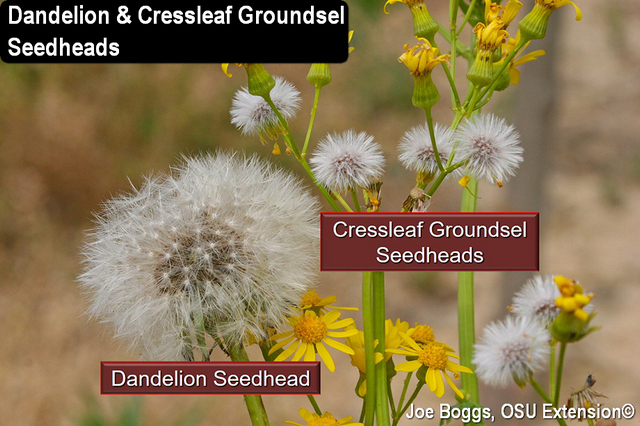 Vast expanses of cressleaf groundsel in full flower may draw the misplaced ire of allergy sufferers.  However, if you’re suffering sneezing fits, the answer, my friend, isn’t blowin’ in the wind.  The sticky, large pollen grains are too heavy to be moved by anything other than insects.  Cressleaf groundsel is actually considered to be an important early spring source of nectar for bees and other pollinators. 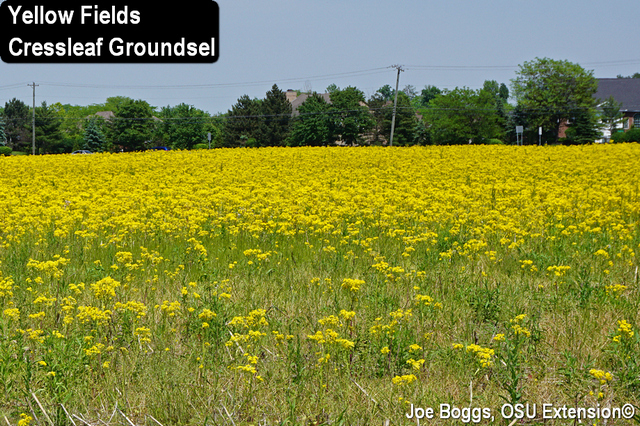 A Word from Management

Of course, if cressleaf groundsel is misbehaving, this winter annual can be easily removed right now and seed production reduced by hand-pulling or cultivation.  “Burn-down” herbicides such as pelargonic acid (e.g. Scythe) are also effective.

However, various reports indicate cressleaf groundsel may have some tolerance for glyphosate (e.g. Roundup), so high rates are required.  Indeed, there is speculation that perhaps the rise of cressleaf groundsel in recent years has occurred through herbicide-induced “un-natural selection.”  In other words, one person’s weed management program is another person’s wildflower proliferation program. 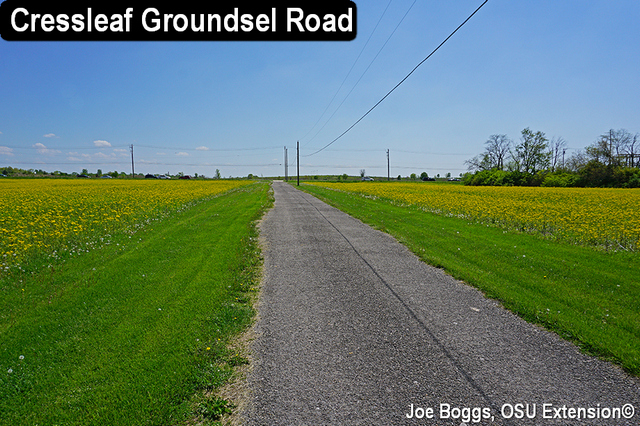 The yellow-flowering garden yellowrocket (Barbarea vulgaris) is a non-native invasive biennial weed that is also on the rise at this time of the year and may be found mixed with cressleaf groundsel.  Yellowrocket belongs to the mustard family (Brassicaceae), so it is a prolific seed producer. 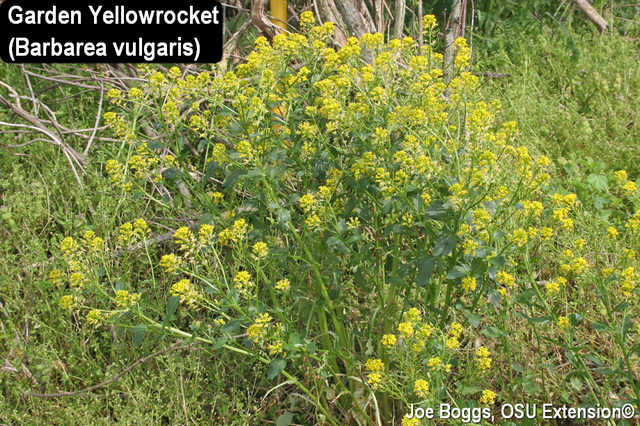 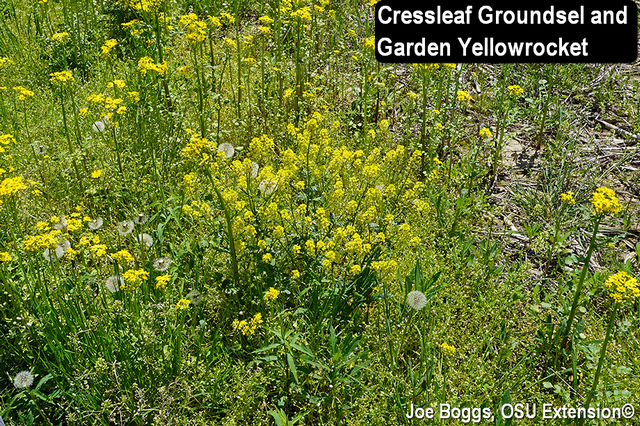 Plants spend the first year in the vegetative stage as tightly clustered rosettes of prostrate leafy stems that are often hard to spot lurking beneath other plants.  The weed shows its true colors the second year when it enters the reproductive stage.  Abundant clusters of tiny, bright yellow four-petaled flowers borne atop hairless, stout, light green to reddish purple flower stalks appear to “rocket” above 1-2′ tall rounded, bushy plants. 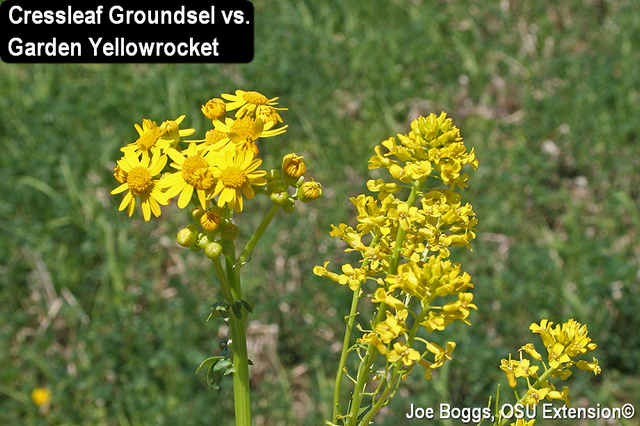