-Originally posted in the BEEF Newsletter on August 15, 2018

Poisonous trees and shrubs are responsible for considerable losses in livestock although producers are often somewhat familiar with their potential for harm. Wilted wild cherry tree leaves, hedge trimmings from Japanese Yew (Taxus species), acorns and buckeyes are common causes of illness and death in Kentucky cattle every year. The potential for poisoning depends on the availability, type and quantity of the toxin within the leaves, seeds and sometimes the bark of the tree or shrub. A majority of the time, cattle will not consume them unless pasture is limited due to drought or overgrazing or they are baled up in hay.

However, if cattle have access to hedge trimmings carelessly thrown over a fence or a cherry tree loses a limb during a thunderstorm, cattle may quickly eat enough to result in death despite having plenty of pasture available. Usually large quantities are required to cause problems (as is the case with buckeyes) but some plants, such as Japanese Yew, are deadly with just a few mouthfuls. Plant (tree, shrub or weed) poisoning should be considered a possibility in cattle on pasture with a sudden onset of unexplained symptoms such as diarrhea, salivation or slobbering, muscle weakness, trembling, incoordination, staggering, collapse, severe difficulty breathing or rapid death. Oftentimes plant poisonings only affect a few cattle in the herd and severity of symptoms primarily depends on the amount consumed over what period of time (rate of consumption). Many plant parts retain toxicity when dried and are considered dangerous in hay. Seeds or fruits can be a potent source of toxin and may be consumed directly or inadvertently end up in grain fed to cattle or accumulate in watering troughs. Prevention of problems begins with recognition of potentially poisonous trees and shrubs and awareness of when problems are likely to occur. Primarily, do not overgraze pastures because animals will usually avoid alternate sources of feedstuffs as long as there is plenty of hay or grass available. In addition, the following precautionary measures should be undertaken to intercept problems before they occur:

The following summary addresses the major poisonous trees and shrubs found in Kentucky pastures along with a few of lesser importance. These were chosen because of their potential for some symptoms to result from consumption and they are relatively common so the risk of exposure is elevated. If available, information on the amount necessary to be toxic in cattle is included. As mentioned in Part I, this series of articles does not address forage disorders such as grass staggers from mold, fescue toxicosis, slobbers from moldy clover, and will only briefly address nitrate and cyanide (prussic acid) poisoning where applicable. UK Extension fact sheets are available on these and other forage disorders at the UK Extension Website http://www2.ca.uky.edu/agcomm/pubs.asp under the “Publications” tab or ask the county extension agent for this information.

Two common toxicities in Kentucky resulting in sudden death in cattle are consumption of wilted wild cherry tree leaves and consumption of hedge trimmings from Japanese Yew, although the mechanisms causing death are quite different. Cherry tree leaves contain both cyanogenic glycosides and the enzymes needed to convert the glycosides to free cyanide gas but these components are isolated away from each other within the plant cells. When cherry tree leaves are damaged (wilted, chewed, crushed, frozen), the cyanogenic glycosides and the enzymes can physically come together and rapidly form free cyanide. When cattle consume wilted leaves and/or very new growth, the cyanide gas is absorbed directly from the rumen into the bloodstream where it prevents hemoglobin in red blood cells from releasing oxygen to the tissues. Small quantities can be detoxified but large quantities quickly overwhelm the system. The lethal dose of cyanide is in the range of 2-2.5 mg/kg body weight. To put this in perspective, wild cherry tree leaves contain 140-370 mg cyanide per 100 grams of plant tissue, with young, rapidly growing leaves having the highest concentration of glycoside. For a cow weighing 1100 pounds, she would need to eat about 1- 1.5 pounds of cherry tree leaves, if they contained 200 mg cyanide/ 100 grams of leaves, to be fatal. Cattle may develop signs of rapid breathing, slobbering, trembling, staggering then collapse and usually die within 5-15 minutes. Veterinarians can administer sodium thiosulfate as an antidote. Hay is considered safe because the curing process allows the cyanide to dissipate. In the case of Japanese Yew, the toxicity is due to cardiotoxic taxines present in the leaves, bark, wood, and seeds that interfere with conductivity and heart rhythm, resulting in heart block. The lethal amount in livestock (0.1-0.5% of body weight or approximately 1-5 lbs of green yew foliage for an 1100 pound cow) is so small they can easily and quickly consume enough to cause death. Livestock are frequently poisoned when fed prunings from cultivated yews or if yews are planted too close to fences and can be reached by cattle. Drying does not decrease toxicity. Few signs are observed prior to sudden death but it is possible to observe depression, nervousness, tremors, weakness, staggering, difficult breathing with grunting, diarrhea, and convulsions. Death often occurs within minutes but can be several days after consumption. Once signs occur, it is generally too late for treatment. Activated charcoal or rumenotomy (surgically removing the foliage from the rumen) may help if caught early and magnesium sulfate by stomach tube may aid in evacuating the rumen. Buckeye and Horsechestnut trees (Aesculus spp.) including Ohio Buckeye (Aesculus glabra), Common Horsechestnut (A. hippocastanum), Red Buckeye (A. flavia) and Sweet Buckeye (A. octandra) can cause neurologic problems in the fall when fruits are consumed or in the spring from ingestion of leaves and buds. The toxic effects are due to a mixture of saponins, the most well-known is the glycoside esculin in the young shoots, leaves, and mature seeds. Saponins are irritating to the GI tract and cause inflammation which improves absorption of the toxin. The esculin glycosides are converted to aglycone in the rumen and cause neurologic signs approximately 16 hours after consuming a toxic quantity. Studies found ground nuts at 0.5% of body weight produced severe signs in calves, at 1% of body weight (for example, 5 pounds of buckeyes for a 500 pound calf), it was deadly. Neurologic signs begin with reluctance to move and a sawhorse stance progressing to muscle twitching, tremors, weakness, hopping gait (esp. rear legs), and sometimes somersaults. Signs progress to muscle spasms, recumbency (unable to rise), and star gazing (head is turned, facing the sky). Once down, they rarely recover. No specific treatment is available except laxatives and fluid therapy and tranquilizers to control seizure activity. Buckeyes are usually found in the rumen contents at necropsy since a large number is needed to cause intoxication. However, buckeyes can also contaminate water troughs and cause clinical signs without ingesting the seeds. 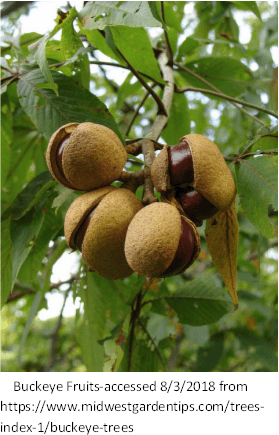 Oaks (Quercus spp.) contain gallotannins that cause inflammation within the digestive tract and directly damage the kidneys. Acorns (especially green), young shoots, leaves, sprouts, and fall buds all contain tannins but content varies with oak species and with leaf age. Cases of natural oak tannin toxicosis have been reported when feed is scarce and animals eat large amounts of oak shrubs, leaves, or acorns usually over several days. This causes irritation to the digestive tract and increased absorption of the toxin into the bloodstream. When blood runs through the kidney, the toxin destroys the kidney tissue. Cattle will go off feed but are often excessively thirsty and urinate frequently. The urine may be brown-colored or dark early on but will usually return to clear. Initially cattle are constipated followed by loose/sometimes bloody diarrhea that is frequently described as black and tarry. Often cattle will grind their teeth and hunch up due to abdominal pain then death occurs within a week from kidney failure. Treatment with supplements containing calcium may be beneficial due to binding of calcium with the tannin to form insoluble tannin complexes. Polyethylene glycol at 10-25 grams per day added to the water or diet is also beneficial. Early treatment may allow regeneration of kidney function over several weeks or more but marked weight loss is expected during recovery. If the damage is extensive, chronic kidney disease may develop with little chance of recovery. Calves born to cows that consumed a large amount of acorns may be born with deformities. “Acorn calves” may have joint laxity, short legs (dwarfism), deformed hooves and skull abnormalities (domed skull or long narrow head). These calves are stunted and never grow well. Acorn calf syndrome may be due to protein malnutrition and/or an unrecognized teratogen but it is not attributed to the gallotannins.

The final trees and shrubs mentioned here are less common problems but Mountain Laurel (Kalmia latifolia), Rhododendron or Great Laurel (Rhododendron maxium), Kentucky Coffee Tree (Gymnocladus dioica), and Black Locust (Robinia pseudoacacia) are all potential causes of poisoning in livestock. All cause irritation to the digestive tract initially so signs may include slobbering and diarrhea, bloat, abdominal pain, and possible regurgitation of rumen contents. If severe intoxication, will see labored breathing, weakness, collapse and death. Mountain Laurel and Rhododendron (both members of the Heath family) contain grayanotoxins in all plant parts, especially the leaves. Rhododendron has a toxic dose of 0.2 % body weight in cattle, while Mountain Laurel has a toxic dose of 0.4 % body weight. Black Locust contains robinin and a glycoside robitin throughout the plant with the inner bark as highest risk but young shoots, leaves (especially wilted), pods and seeds can cause problems. Horses are most susceptible. The toxin involved in KY Coffee Tree is thought to be a quinolizidine alkaloid cytisine, found in leaves, seeds, and pulp surrounding the seeds but, interestingly, the dried seeds are nontoxic. Trimmings or sprouts from stumps may increase risk of poisoning, especially new foliage in late spring, and can see problems if pods fall in watering troughs. 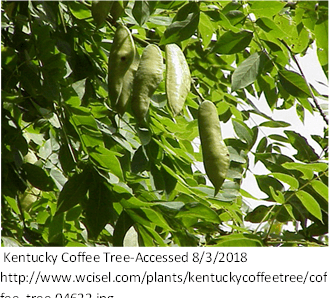 In summary, cattle most often consume poisonous plants when they are forced to do so to survive because grass and hay are unavailable. However, in some cases, hay or silage may be contaminated with a high percentage of poisonous plants and cause toxicity or cattle may be simply looking for something green to eat in early spring and weeds are generally first to emerge. Sometimes poisoning is the result of opportunity due to disposal of hedge trimmings across a fence or a thunderstorm damaging a tree. No matter the reason, it is best to be aware of potential problems and proactively take steps to avoid them if possible.