Some areas are also reporting increases in young grasshoppers in soybeans, another insect favored by dry weather.  Grasshoppers of often start on field edges so early scouting may allow for an edge treatment.  Japanese beetles are another common defoliator of soybean that are starting to appear.  Both of these pests fall into a general defoliation measurement, and we recommend treatment if defoliation is approaching 20% on the majority of plants in post-flowering beans.  Download our guide to estimating defoliation in soybean at https://aginsects.osu.edu/sites/aginsects/files/imce/Leaf%20Defoliators%20PDF_0.pd 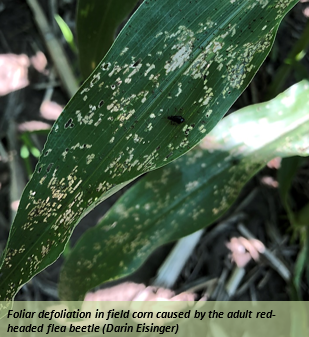