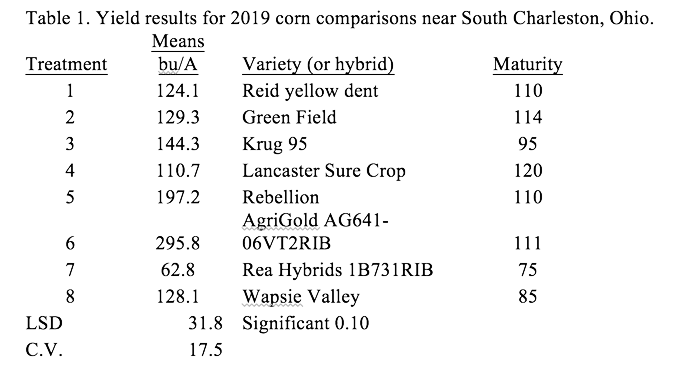 Reid’s yellow dent has a history with Ohio and has played a significant role in modern corn breeding. Green Field and Krug are selections from Reid yellow dent. They were all tall, and had some leaning problems, so looked like Reid across the board. I planted all the treatments at 28,000 seeds per acre. I got 90% plus germination on the modern genetics and about 65% stand on the older varieties. And this year with no derechos at South Charleston, they all stood reasonably well.

Typically when I make this comparison between my modern hybrid and Reid’s yellow dent, I have about a 100-bushel advantage for the modern hybrid. This year, the differences were a bit more at 175 bushels per acre. I use this information when talking with consumers about the value of modern technology in plant breeding. As to why the Rea Hybrid did so poorly — raccoons love this stuff and took about 75% of the ears at roasting ear stage.

Economics? I think you can do the math. Put in $4 per bushel and maybe $10 for the open pollinated varieties if sold as certified organic.