Disease Risk. In Ohio, several foliar diseases are of greater concern in late-planted corn for a number of reasons, 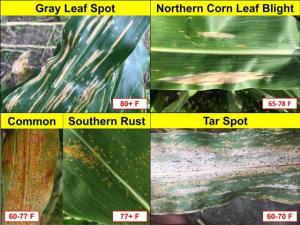 including: 1 – for diseases like gray leaf spot (GLS), northern corn leaf blight (NCLB), and eye spot that are caused by pathogens that overwinter in corn stubble, delayed planting allows more time for inoculum (spores) to buildup, especially in no-till, corn-on-corn fields and 2 – for diseases like common and southern rust that are caused by pathogens that do not overwinter in Ohio, planting late allows more time for spore for blow up from southern states. So, with late planting, not only are more spores likely to be available to infect the crop, they are also more likely to infect the crop at an earlier growth stage and under conditions that are more favorable for disease development. Let us use gray leaf spot as an example. In a “normal” year, although lesions may develop early in the season, this disease typically takes off and spreads after pollination (VT/R1) when the number of spores in the air is high and the weather becomes favorable for infection. Depending on where you are in the state, VT/R1 usually occurs sometime in mid-July. Planting late does not prevent spores from building up or conditions from becoming favorable for the gray leaf spot fungus to infect plant in mid-July, however, the primary difference it that instead of infecting plants at the VT/R1 growth state, the fungus will be infecting plants at a much earlier growth stage, V8-V12, for instance. If the hybrid is susceptible and conditions become favorable, high levels of infection at V8-V12 will result in greater and more rapid diseases development, and consequently, greater damage to the upper leaves before grain-fill is complete. This is also true for NCLB, eye spot, and southern rust.

So, what should I do: Given the scenario described above, the obvious questions are “should I spray my field e arlier this year?” and “will I see a greater benefit from treating my field at V10 or V12 than at VT/R1?” Remember, regarding of when infections occur, disease development and yield loss still depend on how susceptible the hybrid is and how favorable weather conditions become, particularly during pollinations and early grain-fill. Since 2010, we have mimicked the scenario of early infection by planting highly susceptible hybrids into no-till fields that were planted back-to-back-to-back to corn. These were fields with very high spore numbers. We then compared early (V5-7) applications of several different fungicides to VT/R1 and V5+R1 applications. In all cases, we found that applications made at silking (R1) or tasseling (VT) were the most effective in terms of foliar disease control and yield response. Although we did see a yield benefit to treatments applied between V5 and V10 in some years, the average yield increase was often lower and more variable with the early applications compared to the VT/R1 applications. Similarly, on average, the yield response was much lower and more variable when fungicides were used under low disease pressure or in the absence of foliar diseases. Over the years we have found that fungicides tend to be most profitable and the yield response most consistent when conditions are favorable for disease development and susceptible hybrids are planted, especially in a no-till, continuous-corn field. Follow the labels and keep your eyes on the fungicide price and application cost when making a decision. Below are the guidelines commonly used for making fungicide application decisions:

But this year is very different! Indeed, it is, and the approach for scouting for diseases will have to be different as well. You will have to scout fields more carefully and frequently, and look for multiple diseases developing simultaneously  – the crop is developing fast, and diseases will likely spread quickly as well, if the weather is favorable. Look for regular diseases like eye spot, GLS, NCLB and common rust; be on the lookout for explosives and damaging diseases like southern rust; and keep your eyes out for emerging diseases like tar spot.  Eye Spot – Small circular to oval lesions, with a tan to grayish center and a yellowish halo, beginning on the leaves below the ear and progressing up the plant. This disease tends to be very common in no-till fields, and is favored my moderate temperatures and abundant rainfall. Gray leaf spot (GLS) – Grayish, rectangular lesions that develop first on the leaves below the ear. This disease usually begins developing close to or after tasseling and is favored by warm, humid conditions. Like eye spot, gray leaf spot also tends to be more of a concern in no-till corn fields. Northern Corn Leaf Blight (NCLB) – This is another residue-borne disease that develops best under wet, humid conditions. However, it prefers slightly cooler conditions than those favorable for the development of gray leaf spot. Lesions are large, cigar-shaped and gray-green to tan in color. Common Rust – This is not a residue-borne disease, as such, its development is not affected by crop rotation and tillage. Spores are blown in from the south. Like northern corn leaf blight, it develops best under cool, humid conditions. The symptoms are large, cinnamon-brown, elongated pustules scattered over both surfaces of the leaf. Do not confuse common rust with the more damaging Southern Rust which produces smaller, circular, reddish-orange pustules, predominantly on the upper surface of the leaf, and occasionally on the stems and husks. Southern rust develops best under warm, humid conditions. Tar spot is new to Ohio. It was detected for the first time in 2018. The symptoms are raised circular, brown to black lesions scattered across both surfaces of the leaf. It is favored by moderate temperatures, high relative humidity, and extended periods of leaf wetness, and is often more severe in no-till, continuous-corn fields.