Grain marketing is a vital component of a profitable farm operation and is one of the top challenges farmers wish they could overcome. That’s according to a new report from FarmLogs. In the 2019 State of Grain Marketing Report, the farm management software company surveyed more than 1,000 farmers across the country on their grain marketing habits and strategies. 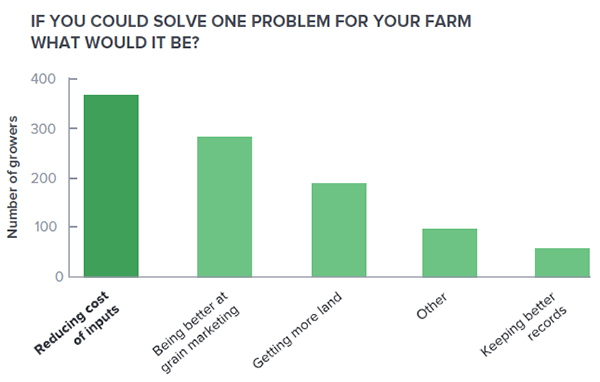 While reducing input costs topped the list, the survey shows 28% of growers identified being better at marketing as a top problem they would fix for their farm. This is shift from the 2018 State of Grain Marketing report, says Jesse Vollmar, CEO and Co-founder of FarmLogs. Last year, 70% of growers reported crop prices as one of their biggest challenges.

Another key shift between the two surveys, Vollmar says, was around forward selling. This year, almost half—48%—of growers reported ideally forward selling 25% or more of their crop. That’s up 15% from last year’s responses. 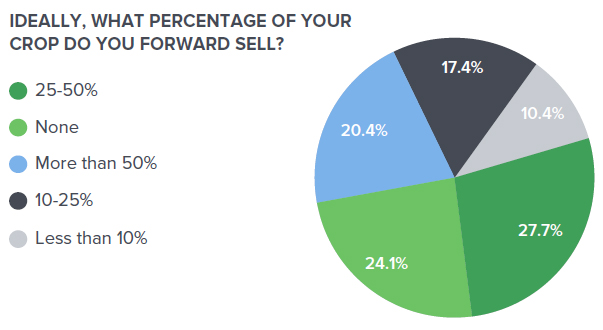 A quarter of farmers reporting that they don’t try to forward sell any of their crop. Only a third of respondents plan out what percentage of their crop they want to have sold by a certain date.

“It’s painstakingly obvious that growers don’t do enough forward marketing and because they don’t, they end up leaving a lot of money on the table that they could otherwise easily capture,” Vollmar says. “The good news is that people are starting to realize that they need to do more forward marketing, but the bad news is they didn’t do it yet this year.”

The survey showed 47% of growers had not sold any of their crop so far this year (as of March/April, when the survey was conducted). 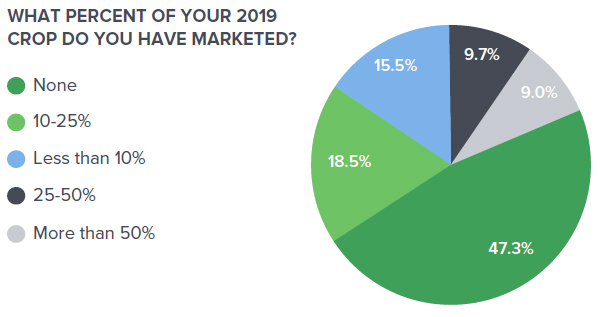 Vollmar encourages farmers to look at forward selling grain when they lock in production expenses. “At that point, you should be looking for opportunities to lay off risk and lock in profit, as oftentimes you’ll get more profit if you lock it in earlier.” 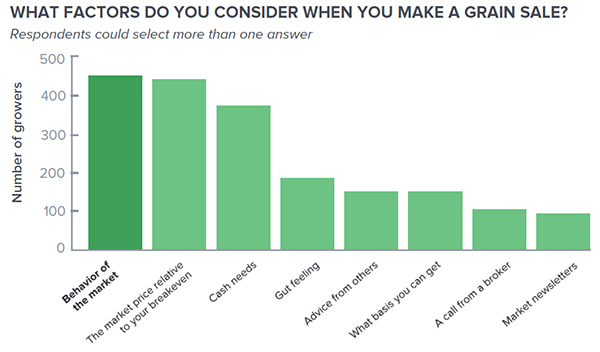 The rank of these factors differs based on farm size. For instance, farmers operating more than 5,000 acres cite their breakeven price as the most important factor, as do farms with 1,000 to 5,000 acres.

For farms with less than 1,000 acres, the behavior of the market and cash needs can also be top factors. 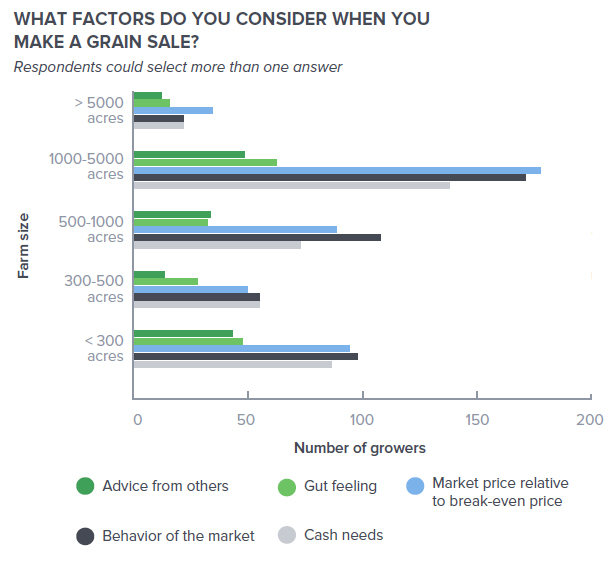 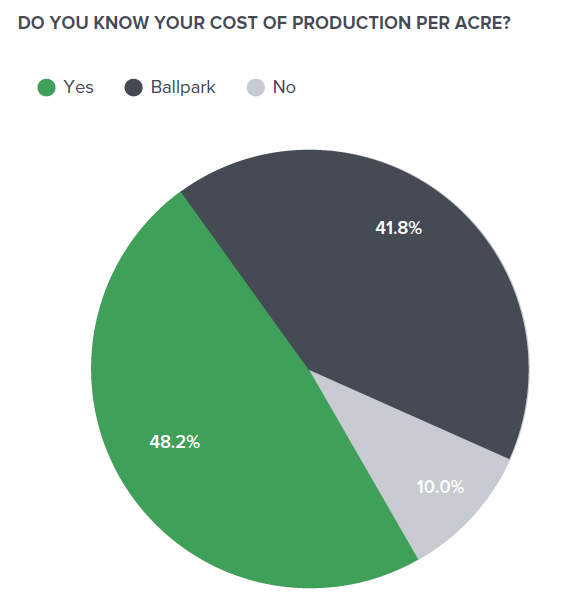 “We were up nearly 15% on the number of growers that are saying they’re using farm management software to help them do their marketing,” Vollmar says. 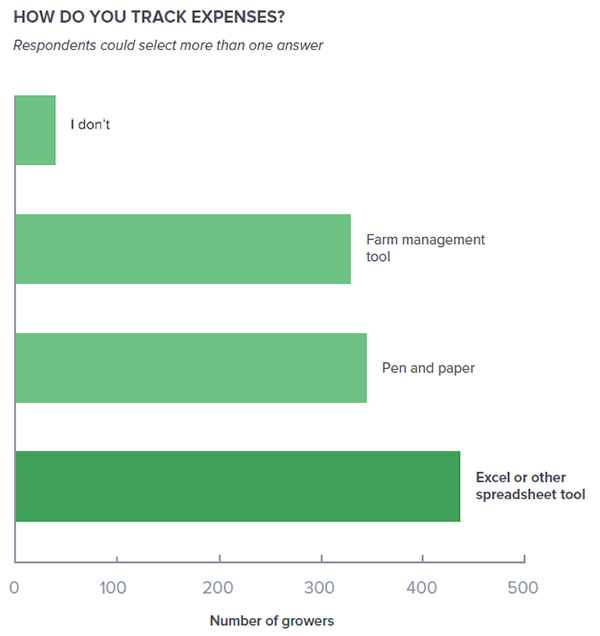 When determining what types of contracts or strategies to use, contract knowledge and familiarity is an important factor reported by respondents. In fact, 54% of growers reported that lack of knowledge or familiarity with a contract/strategy were their biggest considerations when choosing one over another. 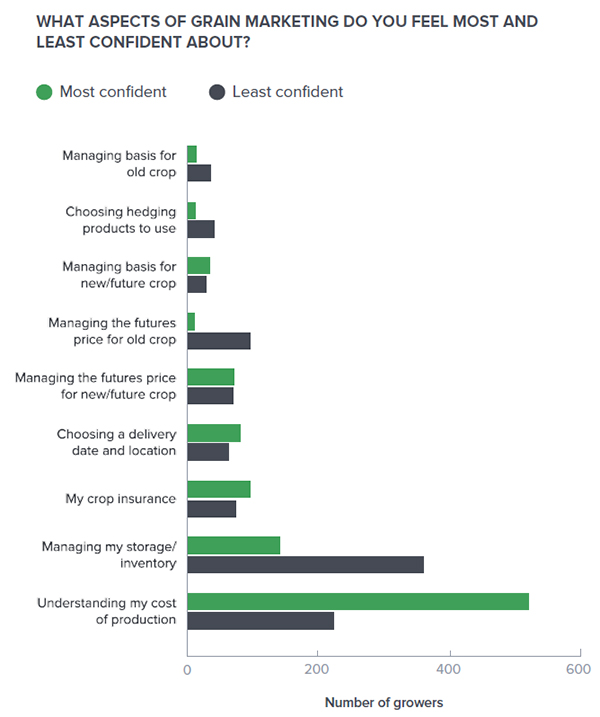 When considering final prices received for grain, more than half of the respondents said that both futures and basis are equally important. 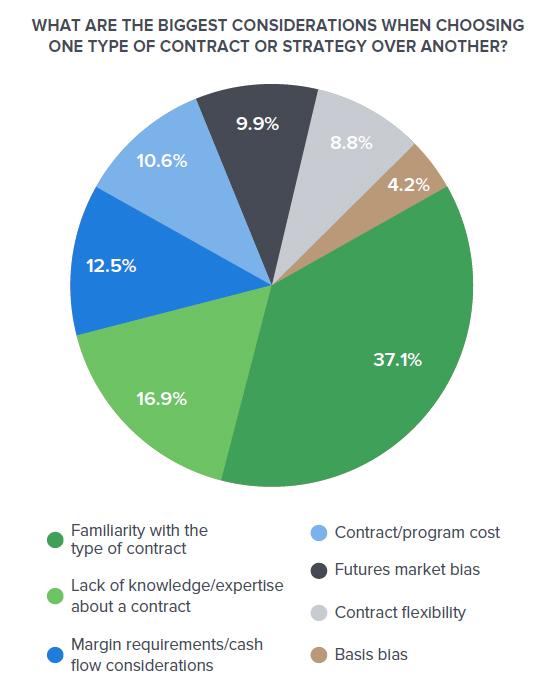 Forward cash contracts and spot sales at harvest were reported as the two most popular methods used by farmers to sell both corn and soybeans. Spot sales were reported to be used by fewer of this year’s respondents compared to last year. 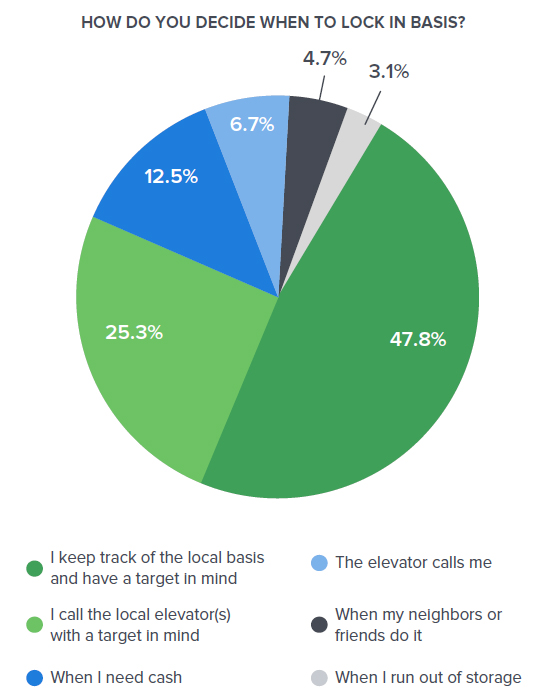 Around 70% of growers reported having storage for at least some of their crop production. Vollmar says storage is an area he believes farmers can better manage to increase revenue.

“I think storage often gets misused as a way to try to get a higher price,” he says. “The minute you decide to put the crop in the bin, you now have to handle that crop twice instead of just once. For the average farm, that’s going to be about 10¢ a bushel. That’s an expense that could have been avoided by forward selling and delivering during harvest.”

Additionally, the grain’s condition is put at risk. “You’re going to lose some of it because it will shrink, you will have splits and damage,” he says.

“Make sure you understand the cost of carrying that grain because you will bear real cost of having it in the bin,” he says.

The 2019 State of Grain Marketing Report, compiled by FarmLogs, features USDA data and proprietary survey responses from more than 1,000 growers. Download it here.