By: Aaron Berger, University of Nebraska-Lincoln

By early December, weaning of spring-born calves has wrapped up for most cow-calf producers.  This is a good time of year to close the books on 2018 and analyze the business to see what it cost to produce a pound of weaned calf. Unit cost of production (UCOP) is a value based on a relationship in production or manufacturing between costs and units of product made or produced.

The relationship between the numerator (Costs) and the denominator (Units Produced) is what drives the UCOP value.  For weaned calves, the UCOP is calculated as dollar per pound.  Knowing the cost to produce a pound of calf is powerful information as it can help with marketing and management decisions.  If it costs $2 per pound to produce a weaned calf, you must sell that calf for more than $2 per pound to make a profit.

The power of the UCOP ratio for cow-calf producers is that everything involved in the production of a pound of calf is represented in the numerator or denominator of the equation. For example, if a producer wants to buy a pickup that will be used in the production of calves, he can estimate how the purchase of that new pickup will affect his UCOP in terms of cost per pound of calf produced. The same thing goes for the purchase of a new bull. Evaluating the purchase of a bull in light of how many estimated pounds of calf that bull will produce in relation to his cost can give insight into what a producer might be willing to spend.

What did it cost to produce a pound of weaned calf this year? What is it projected to cost next year? The old adage “you can’t effectively manage what you don’t measure” is true in relation to managing the cow-calf enterprise. The first step in calculating UCOP is to have production and financial records. These records do not have to be complicated, but the records need to be accurate and thorough. If current management information systems don’t provide the data to run this type of analysis, consider changes that will provide the records needed.

Unit Cost of Production takes into account both product produced and costs. Knowing UCOP allows a manager to look forward utilizing both present and projected input costs with production numbers to make informed decisions. Cow-calf producers who know UCOP numbers for their operation’s enterprises and understand the interaction between input costs and production can implement strategies to manage risk and effectively manage resources to meet their goals.

Table 1 (Estimated Annual Cow Costs for Nebraska 2018) shows estimated costs to produce a weaned calf from a sample central Nebraska ranch. In this example, the cowherd is static with a 16% replacement rate. The number of bred heifers entering the herd is equal to the number of cows that are culled or lost due to death loss. All costs including labor, depreciation, and opportunity cost on cowherd value is included in this example. 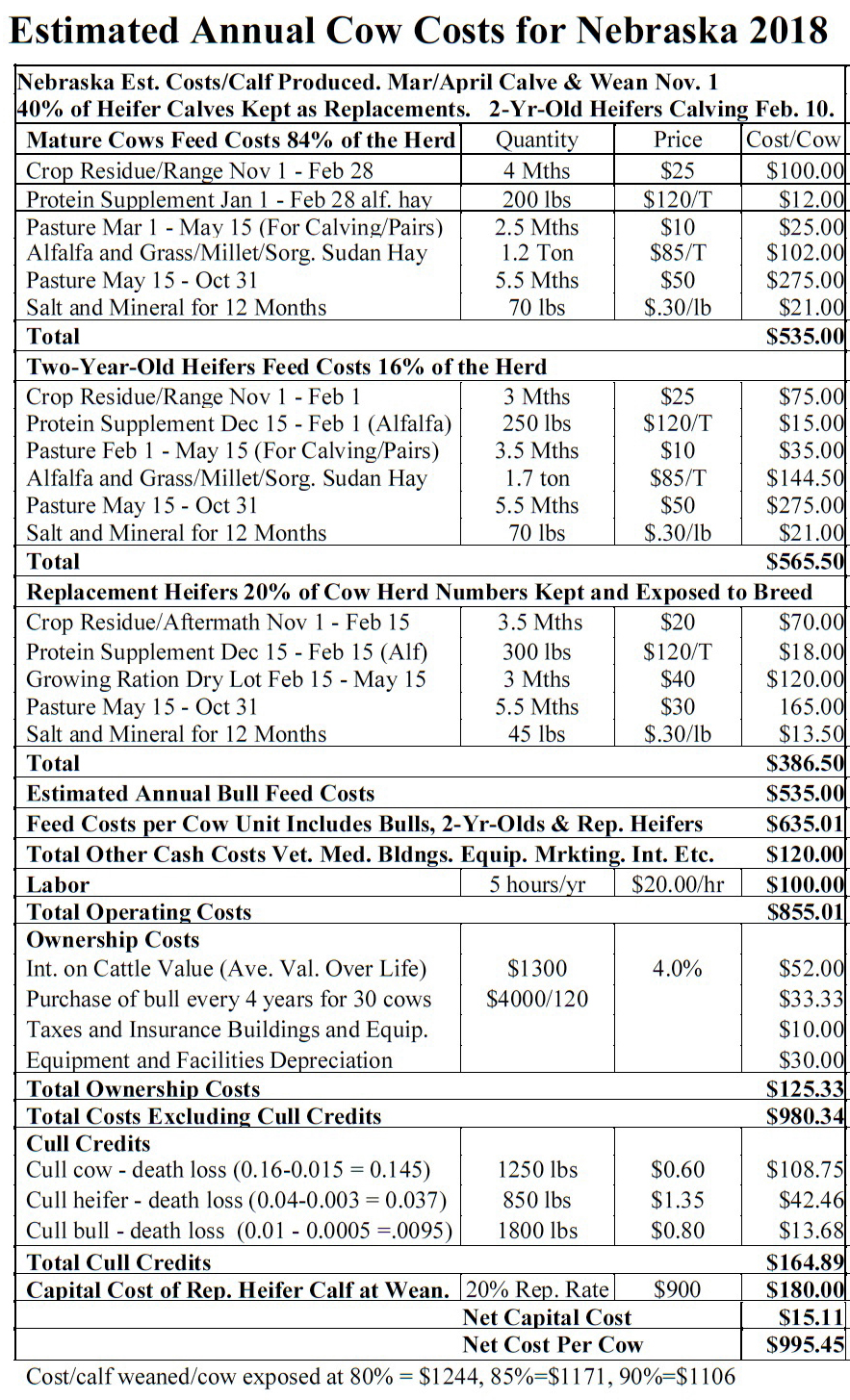