U.S. farmers are anxious for details on the trade assistance package the administration announced in July. Press reports indicate that program guidelines could be issued by August 24th. Meanwhile, business news articles and USDA data continue to shed light on agricultural export variables as the ongoing trade dispute with China continues.

USDA Trade Assistance
Wall Street Journal writers Kristina Peterson and Heather Haddon reported this week that, “Farmers fretting over a trade conflict sparked by President Trump’s tariffs may soon get more details on the $12 billion worth of aid that the administration has pledged, as their concerns mount over potentially plunging incomes and market losses.

“‘We certainly are appreciative of it but…we don’t know how it’s going to be determined,’ Ryan Pederson, a North Dakota farmer who grows soybeans and canola, said of the proposed farm aid. ‘You can’t do any planning off of that because you don’t know what it’s going to be.’

An Agriculture Department representative this week told The Wall Street Journal that the agency expects to announce official guidelines for the programs by Aug. 24 and be ready to implement them by Sept. 4. Farmers would receive payments between September and the end of their harvest, and would be required to provide documentation of what they grew, the agency said.

The Journal article explained that, “The uncertainty has made it difficult for analysts to project farm incomes for the year and how the economic picture will play out.

“Drops in commodity prices tied to the continuing trade tensions are on track to depress farm incomes—the 2018 soybean crop has lost more than $5 billion in expected value since June, according to the American Soybean Association—and producers are assessing how long they can go before laying off workers. Some fear losing overseas markets for good.”

While some countries are retaliating against our farm economy because they don’t want to change their unfair trade practices, our administration will not back down – and we will stand with American farmers 100 percent!

Pat Westhoff, the director of the Food and Agricultural Policy Research Institute at the University of Missouri, addressed the issue of compensating farmers for lost sales exports recently, and noted that, “Press stories also suggest that farmers will get paid based on how much they produced of the affected commodities in 2018. The idea is that the payments are to compensate farmers for lower prices, so payments should go only to those with products to sell. He said,

“Northwest Missouri farmers who will harvest smaller crops this year because of severe drought conditions are not happy that their payments will be smaller than those to farmers who harvest bumper yields this year.

A second important challenge is deciding just how big the checks should be. The principle seems simple: pay people an amount tied to how much the new trade restrictions have reduced commodity prices.

“The problem is that this price effect is not something one can easily measure. Farm commodity prices change from month to month or even from minute to minute for a wide variety of reasons. Disentangling how much of an observed change in farm product prices is due to a trade restriction and how much might be due to changes in the weather or the general economy is very difficult.” 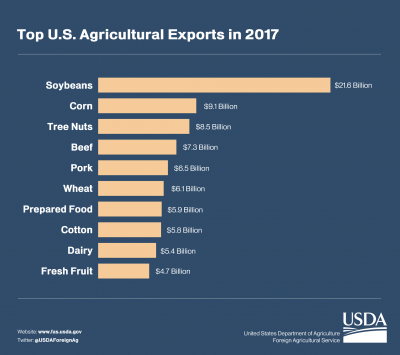 “[Rep. Adrian Smith (R., Neb.)] said it is the top issue farmers in Nebraska’s Third Congressional District are concerned about. He said the checks are intended to fill a gap.

“‘Producers have told me that they [would] rather produce for a market rather than get a payment from the government,’ Smith said. ‘There is this gap here that there will be some pain that will be felt. This is intended to fill that gap.’”

The Minneapolis Star Tribune editorial board indicated this month that, “While the administration may temporarily tamp down the damage with its announced $12 billion aid package for farmers, the money isn’t unlimited. And the package won’t rescue related agricultural sectors, let alone other industries.”

Trade Variables
Bloomberg writer Jeff Kearns reported Tuesday that, “Prices for U.S. farm exports dropped in July by the most in more than six years as a trade war with China heated up, Labor Department figures showed Tuesday. 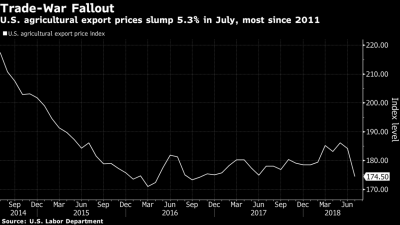 “Agricultural export prices fell 5.3 percent from the prior month, the biggest drop since October 2011, as soybean prices plummeted 14.1 percent. Export prices for corn, wheat, fruits and nuts also slumped in July. The overall export price index dropped 0.5 percent, the most since May 2017, the department said. The figures exclude the price effect from any tariffs.”

Also Tuesday, Reuters writer Marcelo Teixeira reported that, “Shifting trade flows are redefining the Brazilian landscape, spurring more farmers to align their crops with Chinese appetites. The nation’s soy plantings have expanded by 2 million hectares in two years – an area the size of New Jersey – while land used for cane shrank by nearly 400,000 hectares, according to government data.

“China’s growing demand for meat has supercharged soy imports for animal feed. The Asian nation paid $20.3 billion last year for 53.8 million tonnes of soybeans from Brazil, nearly half its output — and up from 22.8 million tonnes in 2012.

“A new 25 percent Chinese tariff on U.S. soybeans – a retaliation for U.S. levies by President Donald Trump – is expected to boost Brazil’s soy exports to an all-time record this year.”

“Brazil’s grains boom has it rivaling United States as the world’s top soy producer this year, after outpacing U.S. exports over the past five years.”

Nonetheless, this month’s Oil Crops Outlook from USDA’s Economic Research Service (ERS) noted that, “The U.S. [soybean] export forecast for 2017/18 was also raised this month by 25 million bushels to 2.11 billion. July export inspections of soybeans—at 118 million bushels—shattered a former high for the month.

“Achievement of this milestone occurred despite negligible soybean shipments to China.

“Soybean exports to other regions have strengthened in response to competitively low U.S. prices. In particular, import markets such as the EU, Thailand, Vietnam, Taiwan, Pakistan, and Egypt have all been more active purchasers of U.S. soybeans.

Brazil‘s collective April-June exports to these foreign markets has seen a year-to-year decline as it has taken on more of China’s demand. Higher forecasts of domestic use and exports lower the forecast of 2017/18 season-ending soybean stocks this month by 35 million bushels to 430 million.” 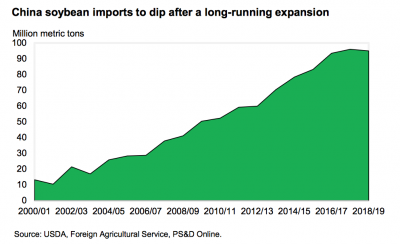 The Outlook report from ERS added that, “July soybean imports in China slowed to 8 million tons from 8.7 million in June. Thus, cumulative imports for October 2017-July 2018 were virtually even with the year-earlier level at 77 million tons. USDA’s 2017/18 forecast of the country’s soybean imports is down by 1 million tons this month to 96 million, versus 93.5 million for 2016/17.”

In addition, Financial Times writer Tom Hancock reported Wednesday that, “After losing a race to reach China before Beijing imposed an added 25 per cent tariff on a swath of US goods last month, the Peak Pegasus sat anchored in the Pacific for weeks while its 70,000 tonnes of soyabeans on board awaited a buyer.

“But this week the vessel began unloading its gold-coloured cargo at a port in east China. Its customer, state-owned conglomerate Sinograin, apparently decided it had no choice but to swallow a $6m tariff bill. More ships are on the way from the US.”

The saga of the Peak Pegasus underlines how China has little choice but to buy the oilseed from the US to feed to its vast pig- and chicken-raising industries. But with Beijing keen to punish Washington, the question for American farmers is how quickly China can reduce its dependence on US soyabeans.

“Growing meat consumption has pushed Chinese soyabean imports close to 100m tonnes a year, about half of which comes from Brazil and a third from the US, according to Chinese customs figures. There are no other countries in the northern hemisphere that can step in at short notice to replace US supply in the months following America’s autumn harvest.”

Meanwhile, Wall Street Journal writers Chao Deng and Bob Davis reported Thursday that, “China and the U.S. reached a modest breakthrough in their standoff over trade, saying they would hold lower-level talks later this month on the spiraling dispute.

“China’s Commerce Ministry said Thursday that a vice minister would travel to the U.S. on an unspecified date, at the invitation of the Treasury Department, to discuss trade issues. A senior U.S. government official confirmed the talks and said, ‘We expect to discuss steps to achieve a more balanced trading relationship.’”