Whether you raise poultry in your backyard, as a hobby, or as a 4-H project, biosecurity should be one of your top priorities.  In light of recent cases of HPAI, or Highly Pathogenic Avian Influenza, it is important to have a plan in place should any flock health issues arise.

This webinar will discuss biosecurity and health management practices for backyard flocks and 4-H poultry projects, and how to apply those practices to some of the more common poultry diseases.

SPEAKER: Tim McDermott, DVM
Tim McDermott, Franklin County ANR Educator, will be discussing biosecurity measures for backyard flocks and 4-H poultry, as well as how to identify and apply biosecurity to 8 of the top 10 poultry diseases Six new articles have been posted in this week’s issue number 1294 of the Ohio BEEF Cattle letter: http://u.osu.edu/beef/

Poison hemlock needs to be managed before it makes seed . . . this week Christine Gelley talks about killing it now!

Articles this week include:

This information is provided by Tim McDermott, DVM, Extension Educator in Franklin County.

I want to share some updates and provide some information related to some questions I have been getting. In terms of birds affected per the USDA poultry confirmation website, we are at nearly 38 million.  For comparison’s sake, the 2014-2015 outbreak was 50 million birds affected.

In terms of where we are in migration, May birding in Ohio is noted for being some of the best in the world. Last week was the Biggest Week in American Birding which attracted thousands to the western Lake Erie basin who are now heading home.  Hopefully not take the virus back with them. This generally marks the peak, but not the end, of migration.

We need to keep spreading the word and all doing our parts on Biosecurity.  I did another video with OPA and ODA that I would ask you all to share with your clients, Facebook pals, and 4H clubs.  It is an update on questions we have received, signs of HPAI, and who to call.

An Update on HPAI

Poultry Biosecurity webinar on Tuesday, May 31st @ 6:30. The flyer is here,  CLICK HERE for registration.  This is likely one of the last Biosecurity classes I will be teaching this season so feel free to share out with any clients that may need to attend.  If they cannot attend, I have a recorded webinar found HERE on YouTube. Join us for an opportunity to have an open discussion about how to foster pollinators and other beneficial insects through your farming practices. Bring your questions to our experts! REGISTER HERE https://farmland.salsalabs.org/wfl_virtuallearningcircle_615 Six new articles have been posted in this week’s issue number 1293 of the Ohio BEEF Cattle letter: http://u.osu.edu/beef/

This week we focus on scouting for spotted knapweed, springtime concerns for grass tetany, and preparing for what we hope becomes an abundant harvest of high-quality hay!

Articles this week include: Curious about the 8-legged friends in your woods?? Join OSU Extension Educator Ashley Kulhanek, as she dismisses the myths and dives into the incredible world of spiders dwelling in a forest near you. Our May 13, 2022, A DAY in the WOODS program, “Understory Plants in Your Woodland” will be offered in person at the Vinton Furnace State Forest.

Registration information and details can be found at: https://u.osu.edu/apsley.1/2022/04/20/understory-plants-in-your-woodland-offered-by-a-day-in-the-woods-to-woodland-owners-and-enthusiasts-in-se-ohio-at-the-vinton-furnace-state-forest-on-friday-may-13th/

Also, our 2022 Brochure which contains details and registration information for the remainder of our A DAY in the WOODS programs for 2022 can be found at: https://u.osu.edu/apsley.1/brochure/ 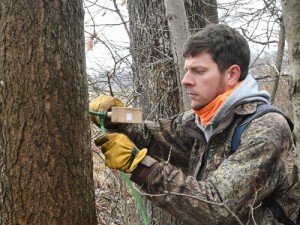 MANSFIELD, Ohio—If you’re new or new-ish to making maple syrup, there’s a lot you can learn at Maple Bootcamp: Ohio.

Set for June 22–24 at The Ohio State University at Mansfield, the event, its website says, will provide “intensive hands-on training for beginner and intermediate maple producers.”

Participants will get details on how to assess a sugarbush and all the steps that follow, from collecting sap to boiling, bottling, and selling. Classroom sessions will take place on the Ohio State Mansfield campus. Field trips and tours will visit local maple operations, including one located right on the campus.

By the end of the program, participants “will gain the skills necessary for the safe, efficient, and profitable production of maple products,” says event co-organizer Kathy Smith of Ohio State’s College of Food, Agricultural, and Environmental Sciences (CFAES).

Smith, who is forestry program director for the CFAES School of Environment and Natural Resources (SENR), looks at some of the bootcamp topics:

1. What trees to tap

“While sugar maple is considered ‘the’ tree to tap for syrup, there are also other maples you can tap,” Smith says. These include black maple, red maple, silver maple, and a hybrid found in Ohio, a red maple-silver maple cross.

“Sugar and black maples produce sap with a high sugar content, which means less sap boiling,” Smith says. “But today’s technology can make some of the other species pretty competitive.”

The bootcamp will teach how to identify the different maple species, and will cover the differences between them when it comes to making syrup.

“Proper tapping procedure minimizes the impact on the health of the tree,” Smith says. Most producers today use 20-volt cordless drills to drill their taps, she says, and the size of the bit and the depth of the hole both are critical. The bootcamp will cover them both, with the goal being that “you’re trying to tap without jeopardizing the health of the tree.”

3. How many taps to have

Producers have a rule of thumb for how many taps a tree should have. It’s based on the tree’s diameter when measured 4.5 feet off the ground. A bootcamp session will explain the rule and how and why to use it.

“You never want to overtap your trees, as the point is to not shorten their productive lifespan,” Smith says. “The more holes, broken branches, etc., a tree has, the more difficult it may be for the tree to produce the pressure needed to get the sap flowing.”

4. How and when sap flows

Temperatures dictate sap flow, Smith says. Nights in the 20s and days in the 40s are key. When the thermometer goes above 32 degrees Fahrenheit, pressure in the tree makes the sap flow. But if temps stay below 32, the likelihood of having the right pressure—enough to make the sap flow—is “slim,” Smith says.

Understanding sap flow and the role of temperature, set to be covered at the bootcamp, “will lead to a more successful season,” Smith says. She notes that “maple producers become weather fanatics when January rolls around.”

5. How to collect sap

Buckets, bags, and tubing are options when it comes to collecting sap. Having the sap go into a storage tank, or directly into the evaporator, also are choices to make. The bootcamp will help participants determine which methods are best for their own operation. Regardless, “Make sure that whatever collection container you use is food grade,” Smith says.

6. How to store and filter sap

Are you selling your syrup? Or is it only for home consumption? “That may make the difference in deciding whether to filter or not,” Smith says, adding also that “storage for raw sap is different than storage for processed syrup.” The bootcamp will look at the pros, cons, and differences among the options.

7. How to make value-added products

Maple syrup can be used for making a range of value-added products. A bootcamp session will explore the possibilities—from maple cream to maple candy to granulated maple sugar—and what it takes to produce them.

8. How to market what you make

“Knowing how you want to distribute what you make is key to a successful operation,” Smith says. Just for friends and family? Sold from the farm or at a farmers market or by arrangement in a local store? A bootcamp session will look at the options and what’s needed to carry them out.

The complete list of sessions and other details can be found in the event flier at go.osu.edu/maplebootcamp.

Registration for Maple Bootcamp: Ohio is $150. Participants can register using the form in the flier, or online at woodlandstewards.osu.edu. Registering ahead of time is required. The deadline to register is June 14.

Ohio State Mansfield is located about 80 miles south of Cleveland and 65 miles north of Columbus.

The event is being funded by a grant to SENR, Penn State, and FGU from the U.S. Department of Agriculture’s Acer Access and Development Program. The grant aims to promote maple syrup production in Ohio, Pennsylvania, and West Virginia through education and research.