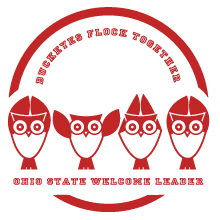 My first real college experience at the Ohio State University was with the Ohio State Welcome Leader (OWL) program. The program started two days before official move-in day which meant I got to move in two days early. These two days, while not seeming like a lot of time in the long run, helped me tremendously in becoming more acclimated to campus. I had more time to walk my classes, learn where buildings are, how my mean plan works, and transition from living at home all of my life to living in a residence hall. Familiarity is a rare feeling after making a huge life change, but the people I met through the OWL program made me feel like I had something familiar going into my first days of classes.

I first found out about the OWL program during orientation when my peer leader recommended it to me. She suggested the program because it allows students to move in early and gives extra time to get adjusted to life on campus before classes start. Through the Ohio Welcome Leader program, I met a tremendous amount of people. I became familiar with other OWLs that lived in my same residence hall and floor. I also had a sophomore mentor who helped with the transition into college and gave advice from personal experience as well. Most importantly, I gained friends through my OWL small group who are some of my closest friends now. Spending more than 36 hours with the same people in a span of two and a half days allowed us to become fast friends. Going into the first day of classes was much less stressful because of the friends I met through the OWL program. I felt like I wasn’t by myself on a huge, brand new campus because I had already made friends and walked around campus.

The OWL program mainly takes place over a two and a half day timeframe. We moved in on Thursday instead of Saturday which helped avoid the move-in day stress because there were significantly less people moving in at the same time. Thursday night we first met up with our “OWL flocks” (small groups of other OWLS) and OWL-C (OWL coordinators, one mentor for each group). We had bonding activities and went to Hoot Fest together where we met even more people that same night. Friday was OWL training day where we had a series of activities that trained us on how to assist others on move-in day and more bonding activities. Saturday was move-in day. From 6:30 AM to 7 PM, we welcomed students and their families and helped them move into their residence halls as quickly and efficiently as possible. The days are busy and tiring but the experience was worth it. The extra time on campus, learning where everything is, and making new friends has still impacted me today. The friends I made through the OWL program are now some of my closest friends that I have in college who I talk to daily. The OWL program made the transition into college much easier. Getting involved with the program gave me an early support system on campus. My OWL flock became yet another group of people that I had something in common with so I have never really felt alone on campus.